Yesterday morning the doorbell rang at 7:45. It was Juan from Asplundh, the tree trimming company. Give us about two and half hours, he told me, and we will be back to trim your trees.

I knew it was coming; just didn’t know when. So today was the day. Time to move pots out of the cactus garden to make the trimmers’ job easier and for the plants own protection. And I needed the full two and a half hours to get it done. But I did, and sure enough, at 10:30 here came the truck.

First step was to unload the wood chips already in the truck. Down the line of mulch they had already brought me they went and dumped their current load. 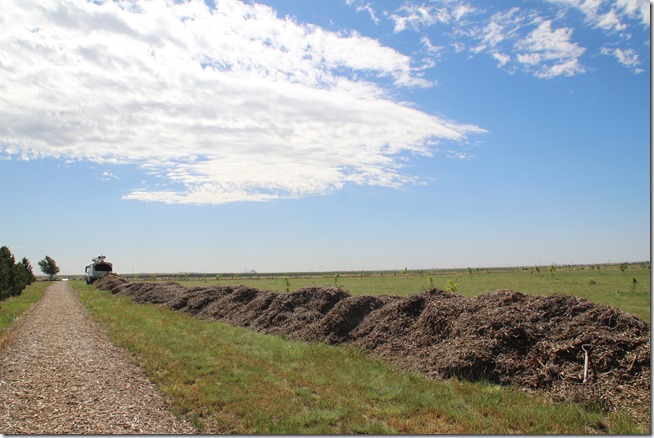 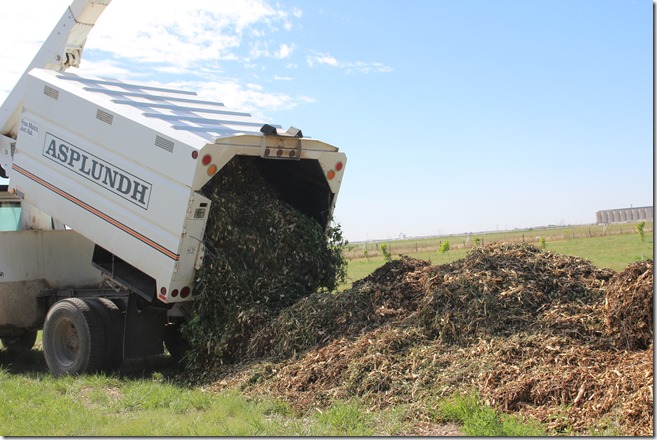 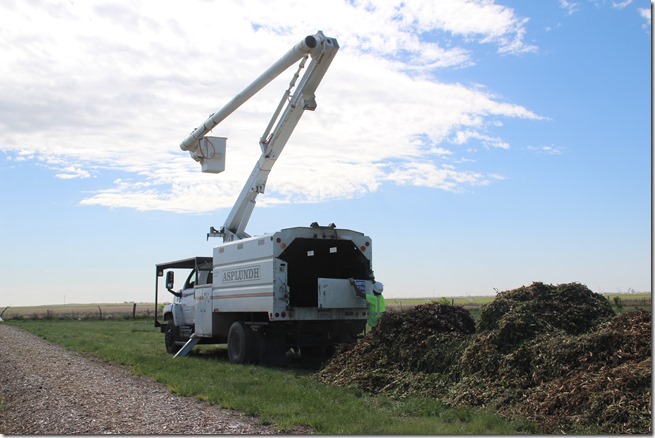 Then it was on to the first tree, a honey locust next to the barn that had come up voluntarily in just the wrong place; under the power line. We had talked about taking it out for various reasons. Juan said they would remove the whole tree with our permission because it would make their job easier in the long run-one less tree to trim every few years. So I signed the form and they went to work. 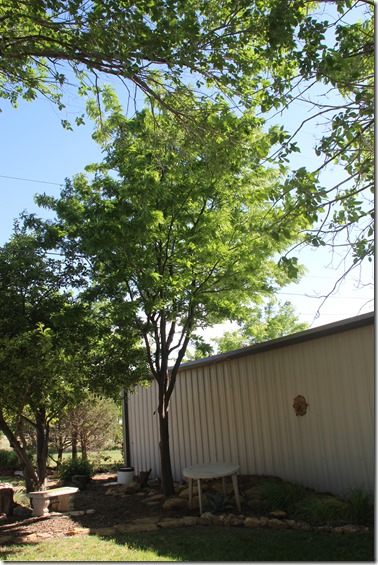 They pulled the truck up behind the barn, Juan climbed into the bucket and started the procedure. 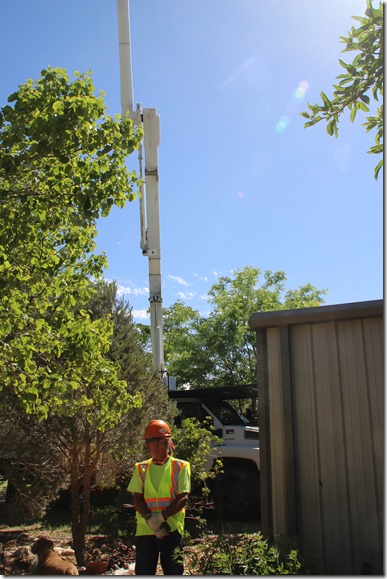 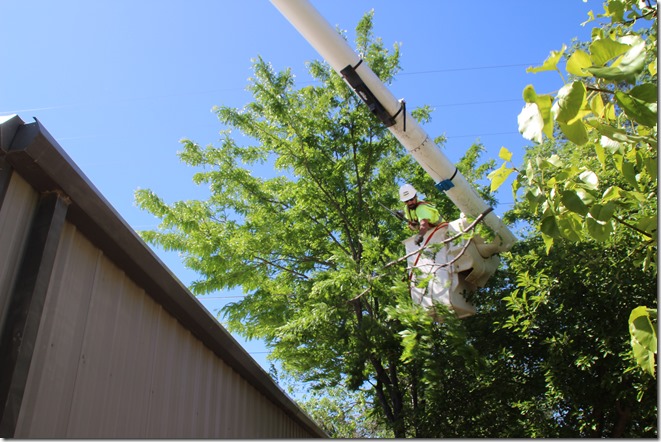 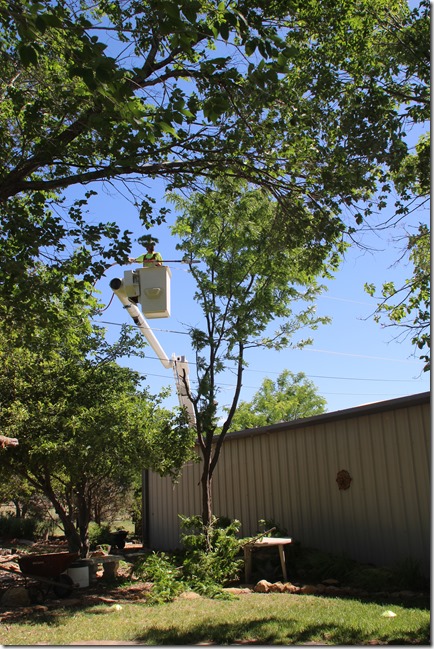 Bill thought to put this table over the agave to protect it from falling branches. Thank goodness he did! 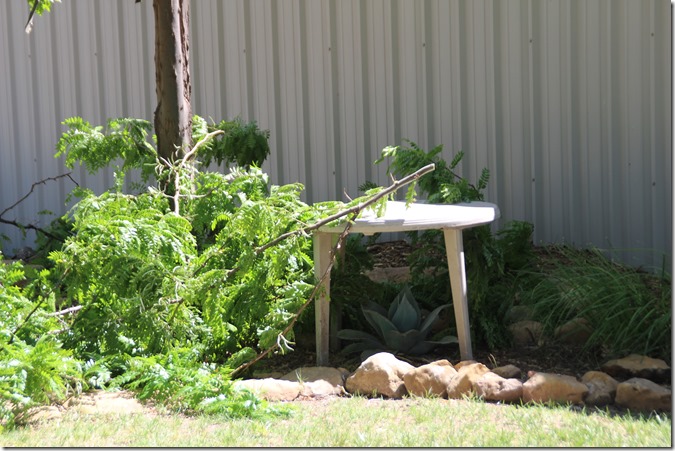 Lex’s job was to gather fallen branches and stack them neatly in preparation for chipping. 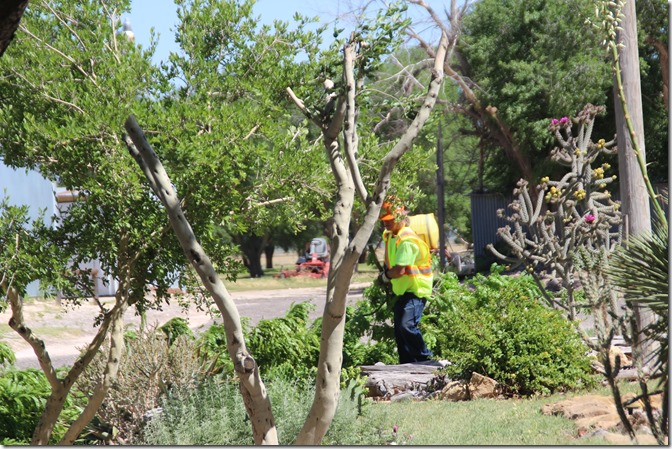 After meeting the men and checking out the truck, the dogs pretty much lost interest but hung around, just in case they might miss something. 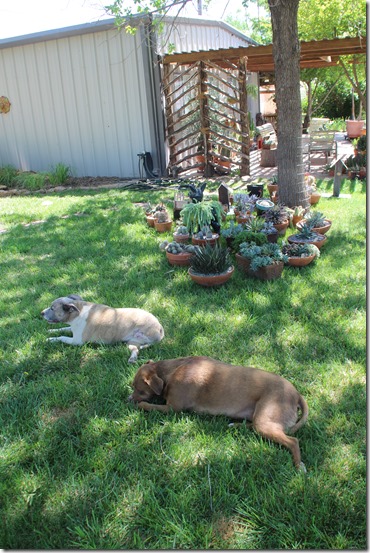 After all the branches were off, the trunk had to come down and be cut close to the ground. Chemical was applied on the stump to kill it so the tree wouldn’t sprout back. The tree will live on, though, sort of, as I will use the fallen trunk as decoration in the garden somewhere. 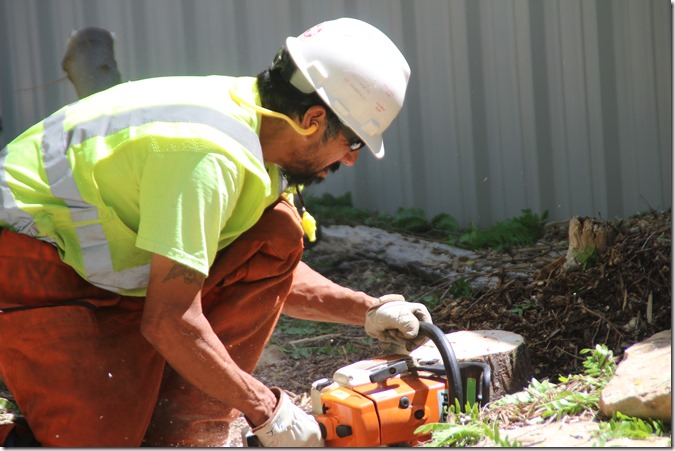 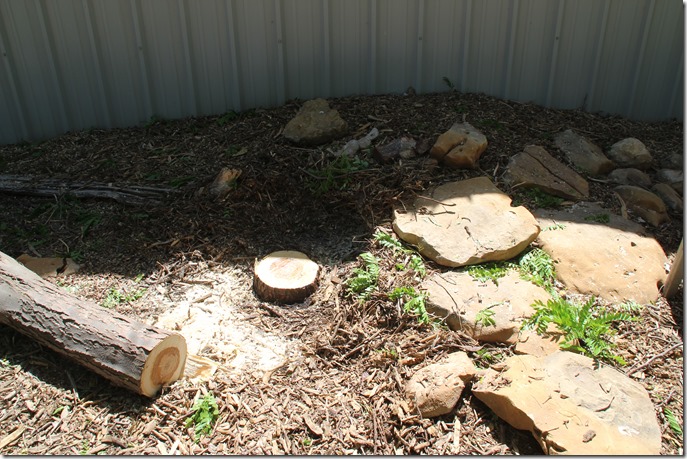 Then it was the big elm tree’s turn. 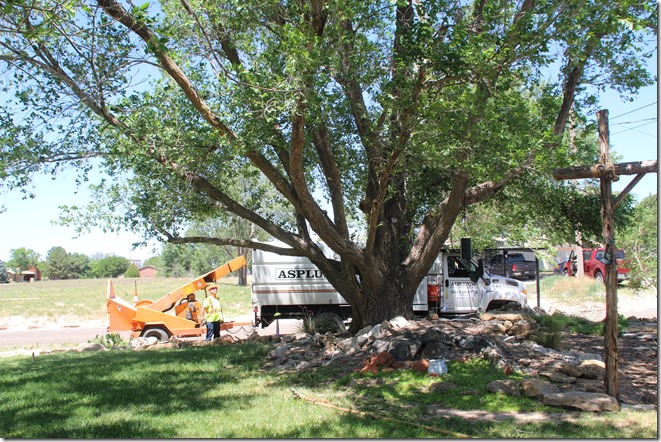 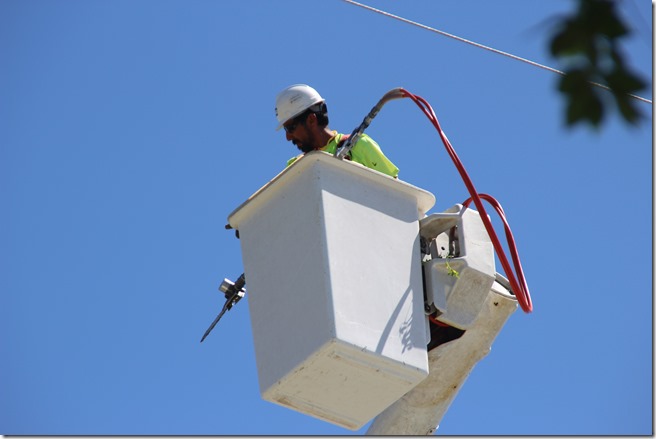 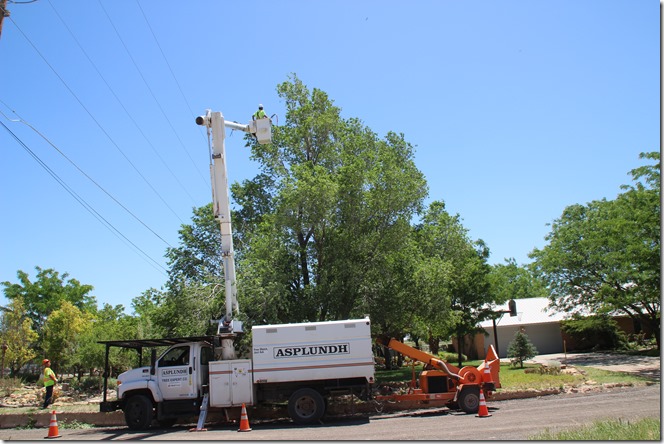 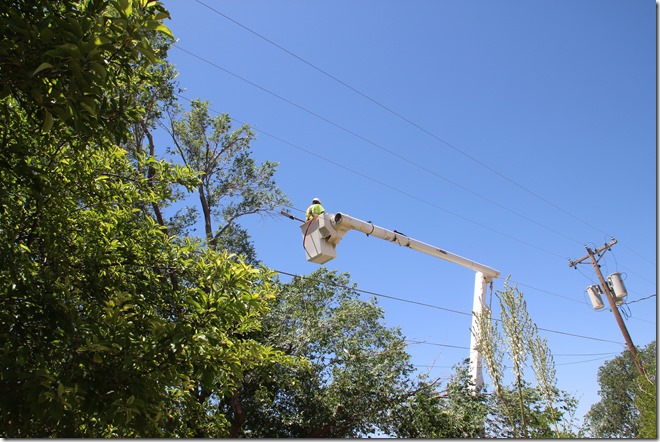 After the trimming was done, it was time to chip the line of branches Lex had piled up with the cut ends all facing the same way, which makes it much easier to feed them into the chipper. 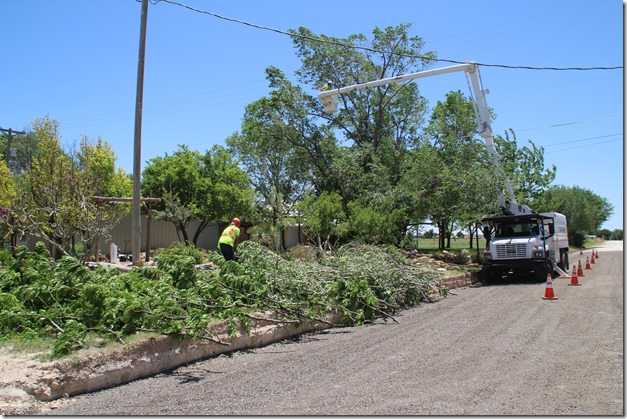 And that’s what they did- fed the chipper. That step went very fast. 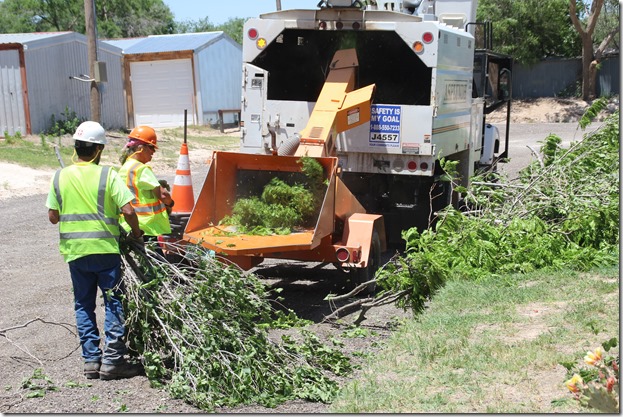 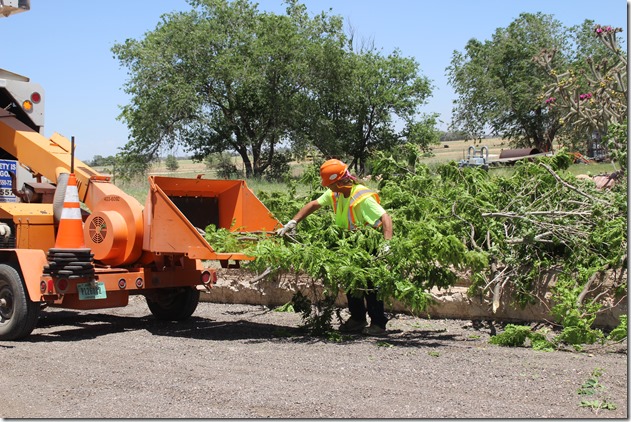 I wondered how full the truck would be after my two trees. Barely took up any space at all! But eventually it will be added to my line of mulch in the pasture you saw earlier. 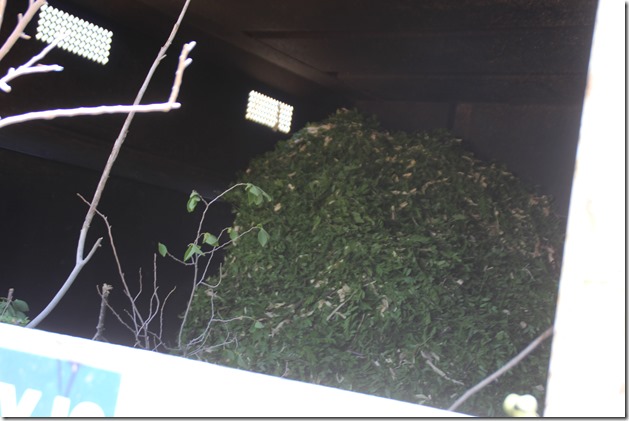 At 2:30, Juan Peace and Lex Moffitt were glad this job was over with! 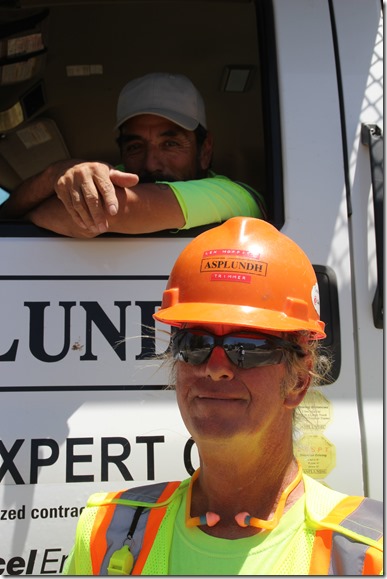 The results of their efforts- 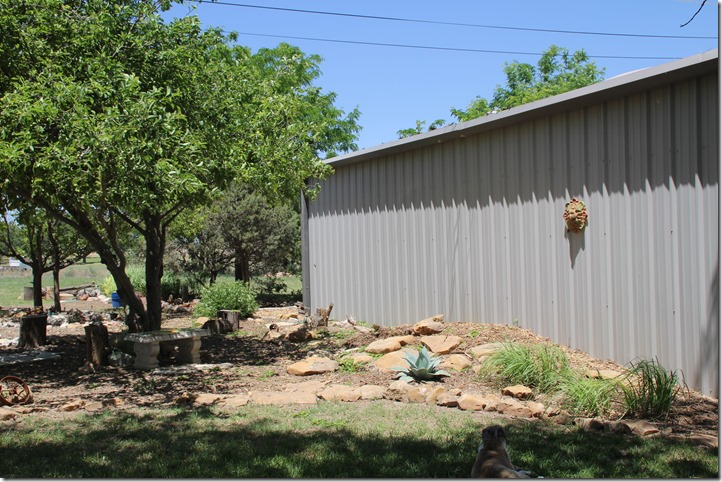 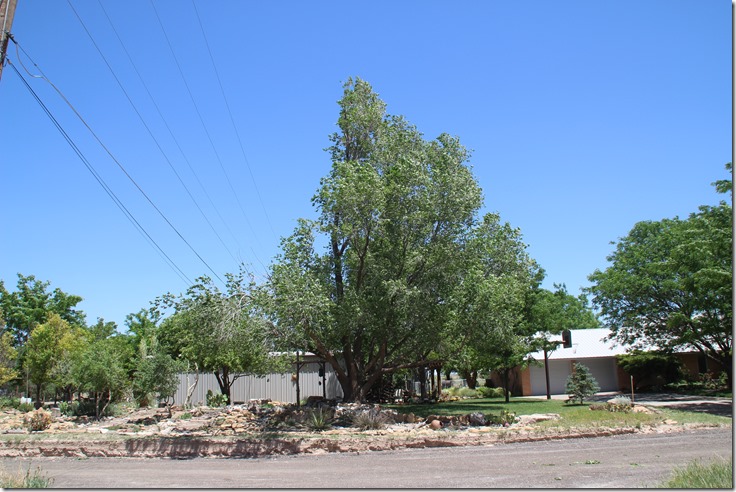 I know people bitch and moan when they see the Asplundh truck coming to cut up their trees, but those same people would also bitch and moan if they wound up without electricity due to branch interference, not to mention the danger of electrocution from fallen wires. And you know what? The trees will fill in again, and the guys will come trim them again, and life goes on.

So until we all get better at planning ahead and plant our trees away from the power lines, I will continue to get free mulch!

Which, by the way, you could have, too. All you have to do is ask.