I happened upon this rusty card file box at Mason Country Collectibles, a primo junk/antique store in Mason, Texas. I saw possibilities for using it as a planting container. The price was right, so I bought it. 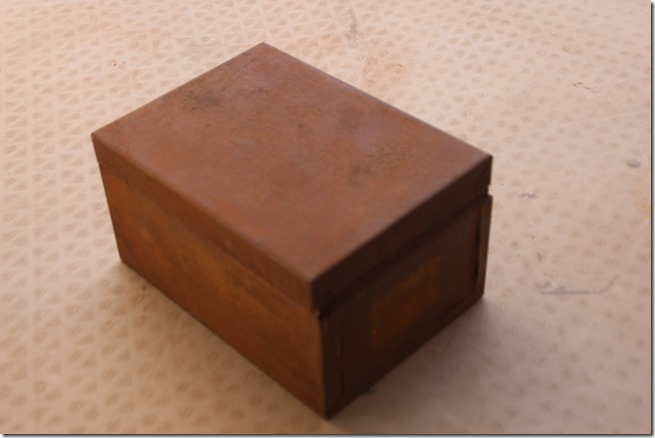 The weather finally agreed to be nice, so I planted it yesterday. Thought I’d share the process with you. First off, Bill drilled drain holes for me and directed me to his wire brush to scrub off some of the flaky, scaly rust, which gave the box a nice but still rusty finish. 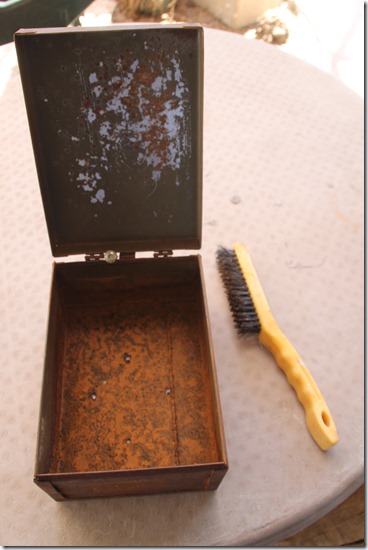 I was concerned about how far back the lid fell when the box was open and thought it would look better if it stood up straighter. Bill offered to weld the hinges in a permanent upright position, but I came up with an alternative fix that would allow the lid to be let down again in the event it might look better as the plant grows. So what I did was insert a short fat bolt between the lid and box and tightened the nut to the desired angle. 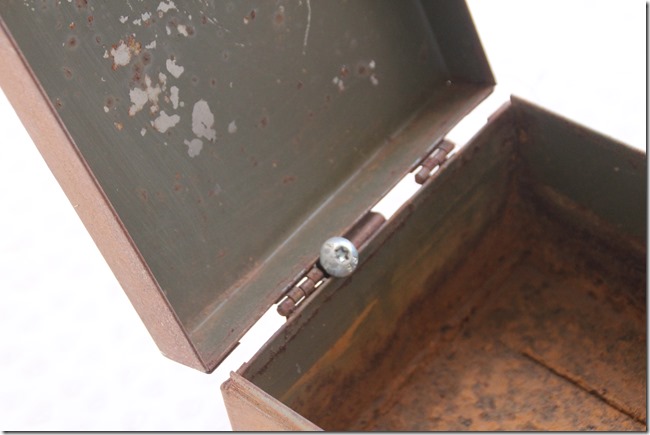 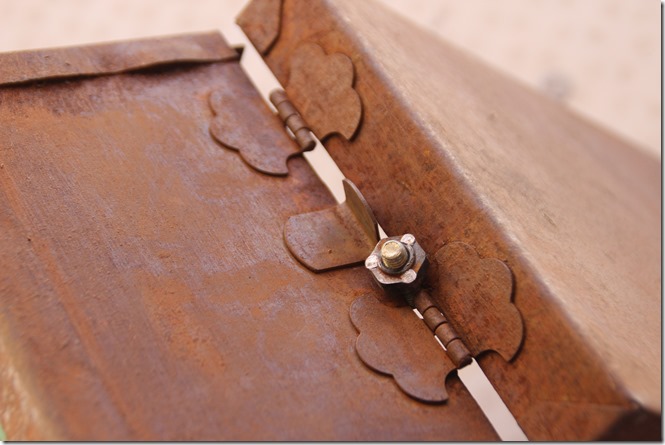 And this is what it looks like now. Later I can change it if I want to. I took this picture after I had put in a layer of gravel on the bottom and started adding the soil, a mixture of compost soil and perlite. 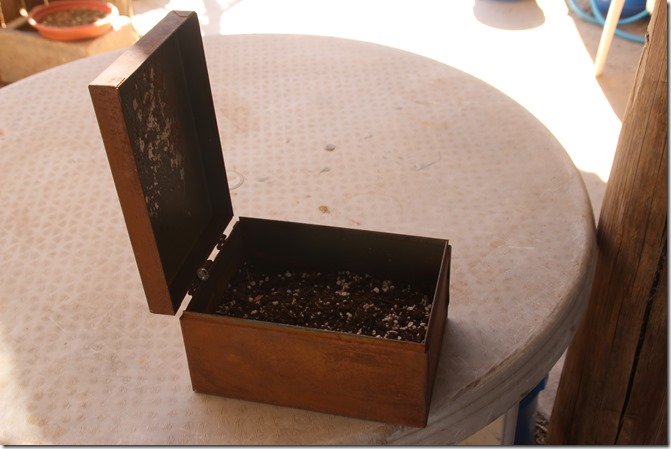 Time to add the plants, starting in the back with the tallest one, a nice grouping of echeveria harmsii. 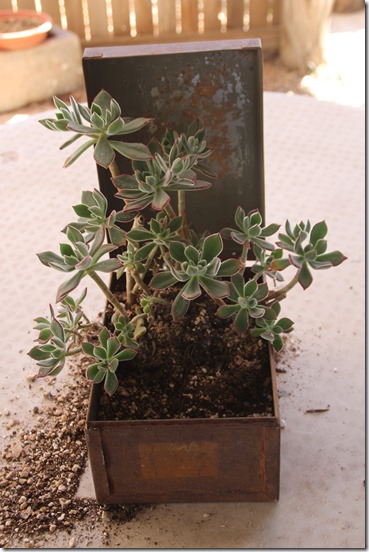 Next I added a bunch of smaller-leafed ghost plant sedum. 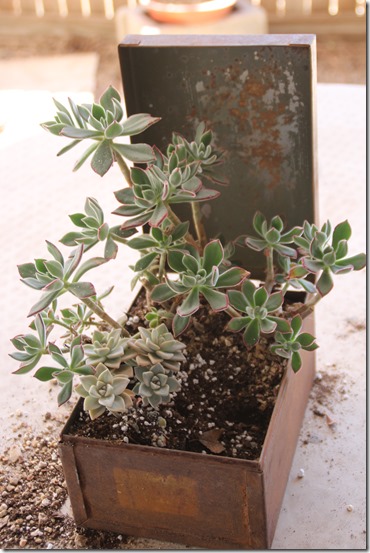 To add a different shape to the arrangement, next I planted an aloe blush. 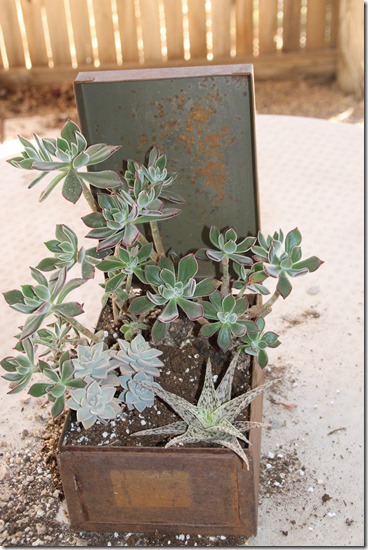 I wanted one more plant, so in that little empty space I put a cutting of stapeliad zebrina de marco. In tight places like that, cuttings are easier to add than a whole plant. As the cutting grows, it will add another color and shape to the grouping. And those neat little flowers that look like red Life Savers. 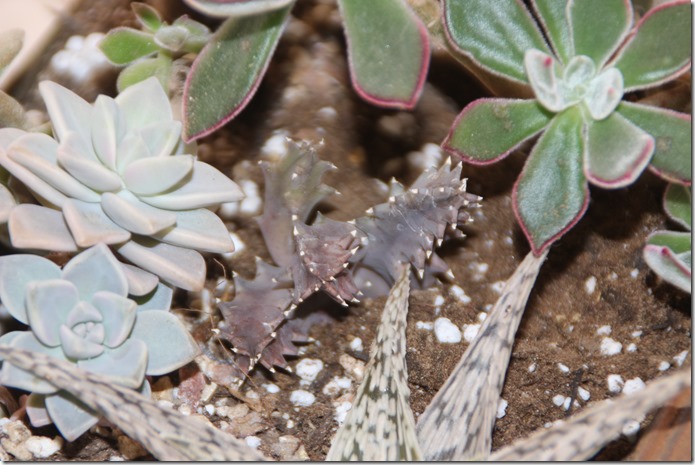 I could have added a rock or trinket, but the box was getting full and the box is the really the star this time, so I chose not to add anything. But gravel for top dressing really finishes it off. Since the box is dark, I chose a light-colored granite gravel that I buy at Bilbrough Marble Division at Burnet, Texas. I put a scoop in my sifter and washed it before spreading it in the box. 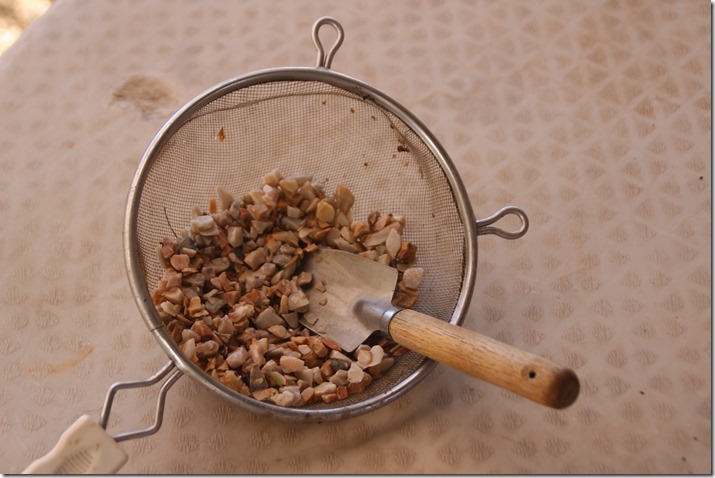 And this is what the finished product looks like. 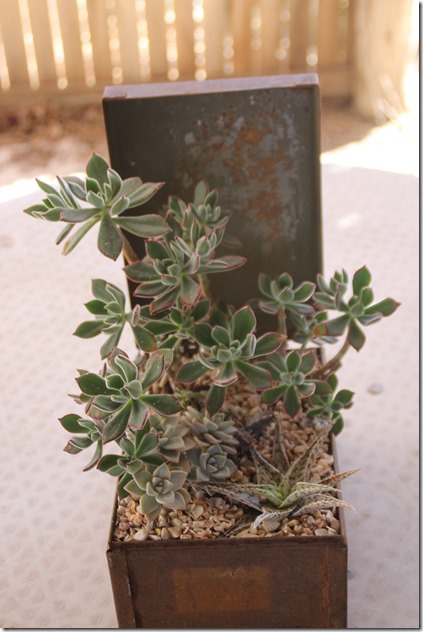 So check out what’s gathering rust in your back yard or ferret out a good junk store in your area, and get busy.