Ingrid’s Hand Woven Rugs, Inc. is a Trip Back In Time 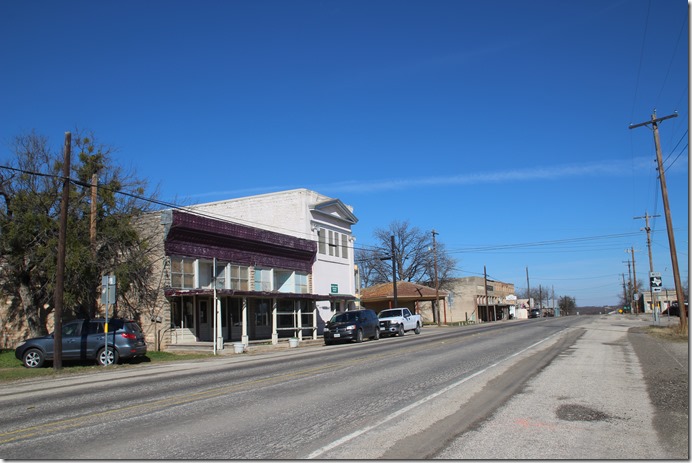 Founded in 1879 and named for the Indian pictographs painted on the cliffs overlooking the nearby Concho River, Paint Rock, Texas, is the county seat of Concho County; pretty obvious when the courthouse stands grand and solemn on US highway 83 as you drive into town. 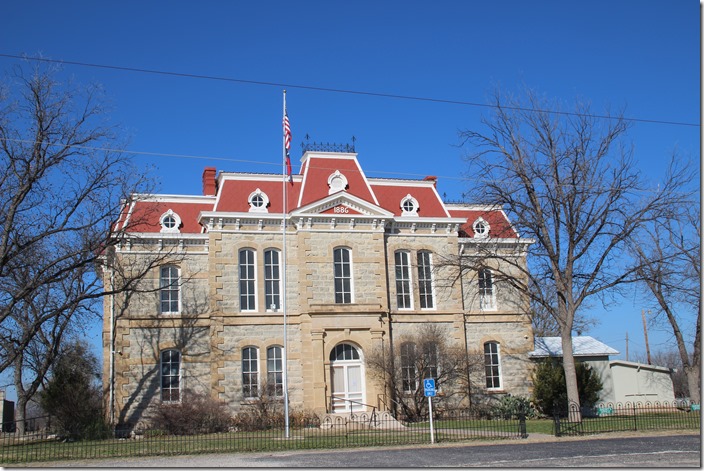 The population has dwindled to 273, and aside from business requiring a trip to the courthouse, the town has two other attractions that apparently pull in precious few visitors. Tours can be taken to view the pictographs, but what made me take the side trip to get there was Ingrid’s Hand Woven Rugs, Inc. And you should, too. 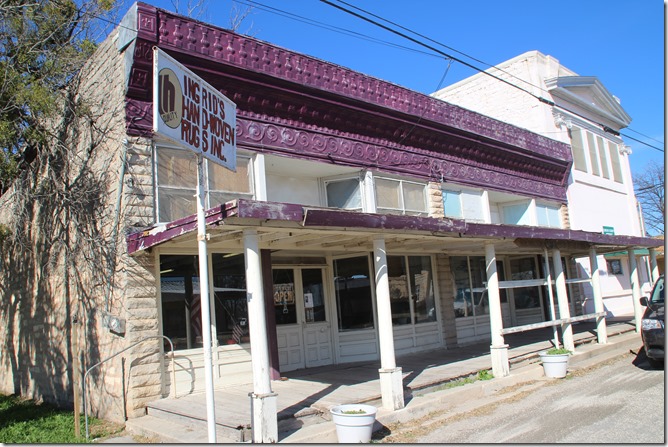 The courthouse was built in 1886; the rest of the buildings on the highway that serves as the main street of town date back that far as well. Most of the buildings are dark and abandoned. Then your eye is drawn to the purple pressed metal trim on this unassuming building. This is Ingrid’s. If you bother to stop and go inside, you will be enchanted by the sights and sounds of the way things used to be done in America, by hand, with skill and pride. In this tiny, pretty much forgotten and overlooked little town, yarn is spun from the fleece of llamas, alpacas, and even buffalo, and woven into lovely custom-ordered rugs.

The view when you first enter is nothing unusual; rugs are on display and the business office is nothing fancy, a particle-board square tucked into the corner of the room. 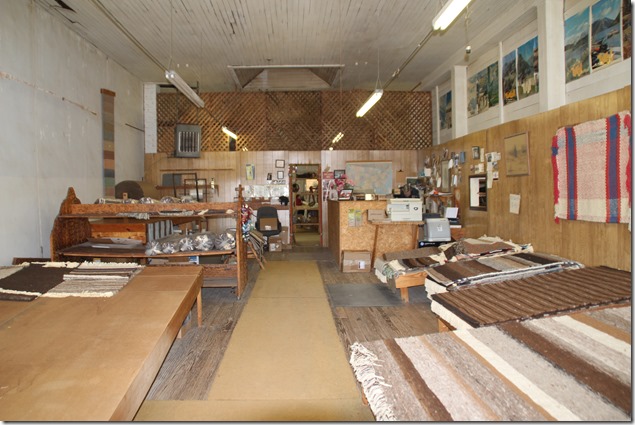 But after you are greeted by Reinhard Schoffthaler, owner and keeper of the craft, who graciously took me on a tour of the way things used to be made, you see the marvelous machines and the skilled craftsmen who keep this process alive. 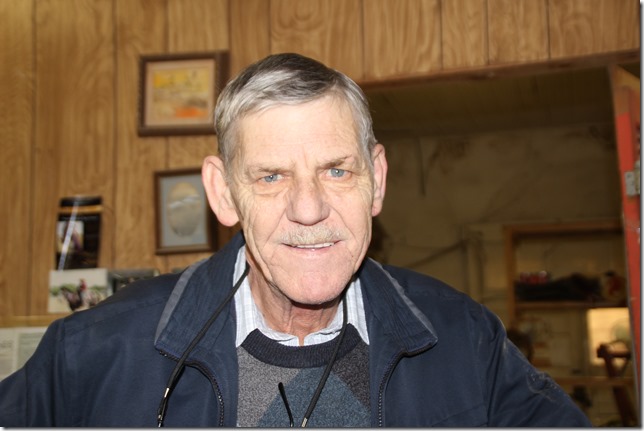 Reinhard and his family came to America from Rietz, Austria. He settled first in New York City, working as a chef. His cousin Leo Haas  went to Corpus Christi, Texas, where he met and married Ingrid. They worked in the tourist trade and real estate. Time passed, they traveled, and eventually wound up in the Paint Rock area, then a busy sheep and goat-producing center. If you have sheep and goats, you have wool and mohair, and suddenly it all became clear. Leo, who knew the business, had the necessary machines sent over from Austria, built the looms on site, taught Ingrid the yarn and weaving process, and the business was born in 1979. In the meantime, Reinhard had discovered that while the money he made as a chef was good, the hours were awful, and the Haas’s convinced him to come to Texas and work with them as a partner in the business. Eventually, Leo and Ingrid chose to move to Fredericksburg and opened a rug store there,  but Reinhard remained in Paint Rock and made the rugs. Leo passed away in the late 90s, but Ingrid and Reinhard remained partners until Ingrid became ill with cancer and wanted to get out of the business. As he was getting older, Reinhard didn’t relish the idea of taking on the whole weight of the rug operation, but he discovered a silent partner in one of his customers in College Station, Texas,  who had an alpaca ranch in Georgia. A deal was cut, and the weaving continues.

And thank goodness! What a shame it would have been to lose this factory with its craftsmanship focus on authentic products. Let me show you what Reinhard showed me. We walked across the street to the spinning building, another old building that dates back to the beginning of the town. In this building is where the fleece is stored, turned into yarn, the warp for the loom is made, and where all the big machines are housed. 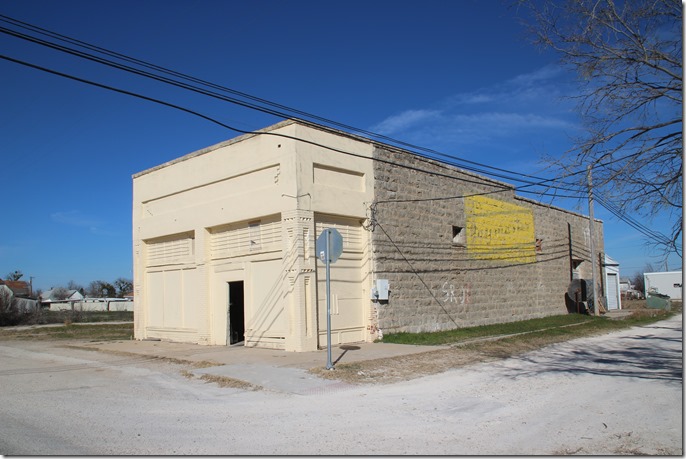 Bags and boxes of various fleece are piled up everywhere from ranches all over the United States. What Reinhard does, in essence, is give the livestock producers an outlet for the fleece which might otherwise be discarded. Turns out that only no.1 grade fiber is used for knitting, which leaves the shorter, rougher no. 2 and 3 grade fiber as useless-unless you make it into a rug! These ranchers then order rugs made from their own fleece, which they then sell or keep for themselves. 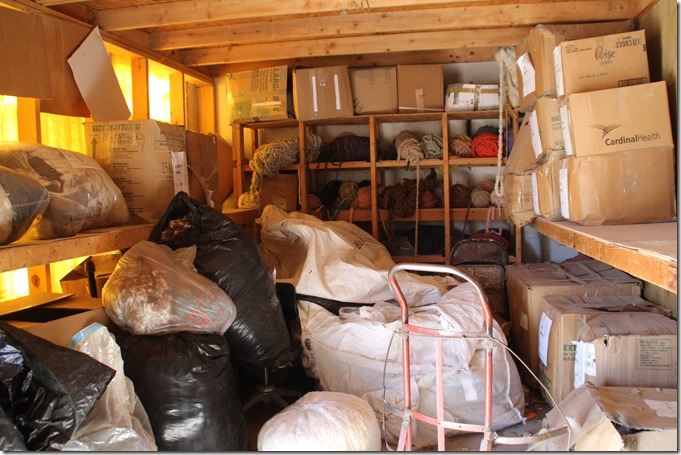 The first step is blending the different grades of  fleece in this machine before it goes to one of the spinning machines where it is carded into yarn. 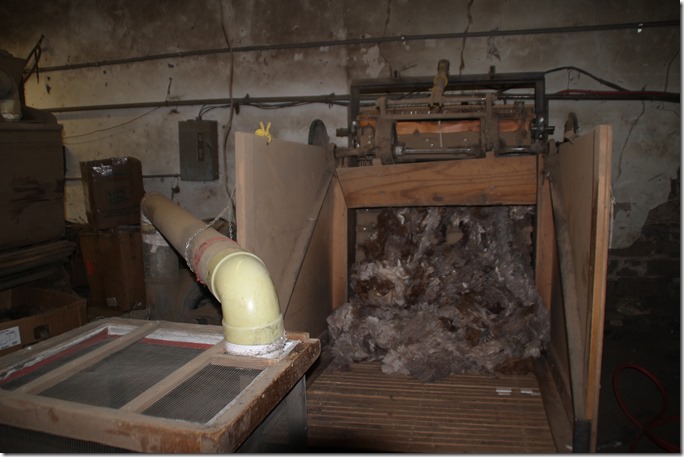 This big spinning machine and another smaller one on the other side of the room are what spin and cord the fleece into yarn, which is spun around a jute core. The jute is inside the fiber so that when the yarn is woven into the rug, the rug is reversible; it looks finished on both sides. 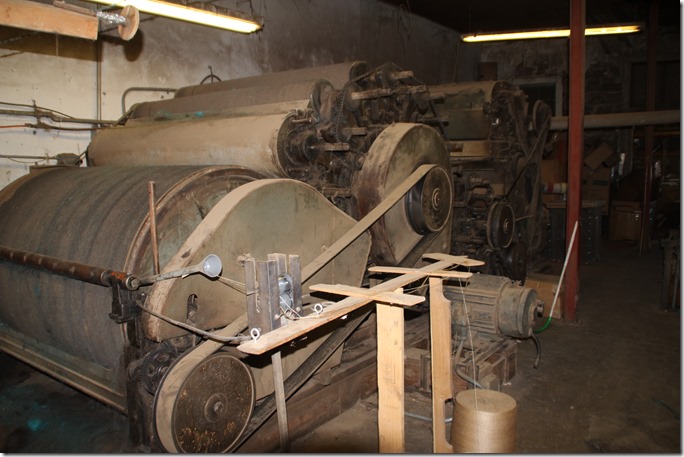 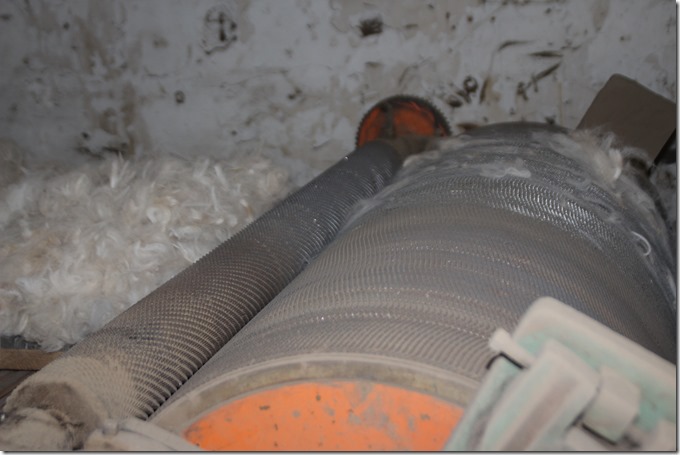 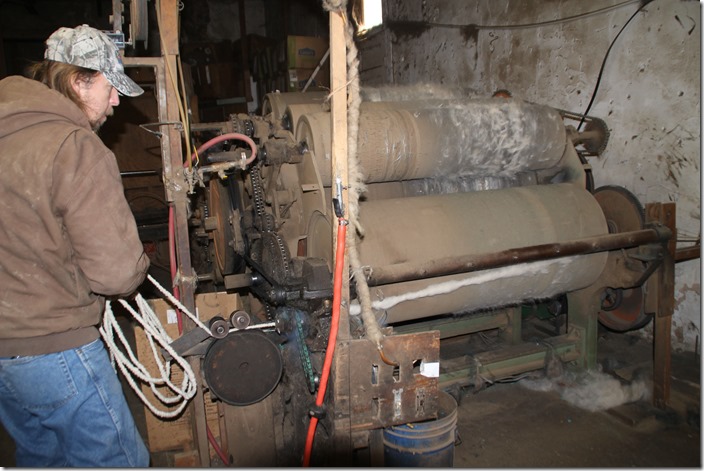 This spool of yarn is then pulled off the machine and taken back to the main building where the looms are and stuffed into a shuttle for the weaving process. 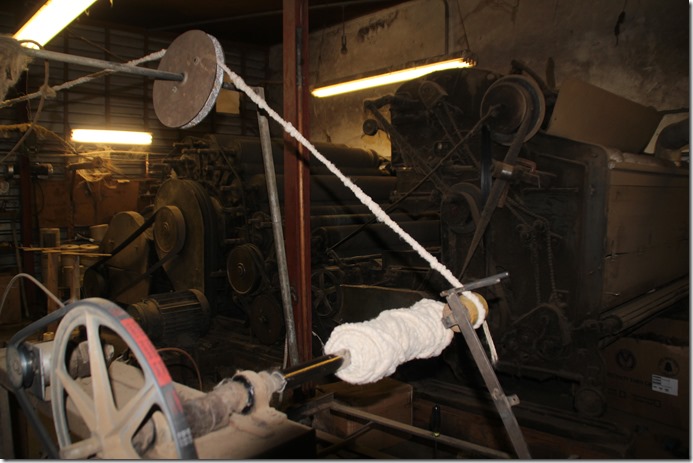 Also in this spinning building is the warp machine used to make the warp for the looms, the horizontal strings on the loom that the yarn is woven into. This scary machine lines up the thick strings that will then be put in the looms. 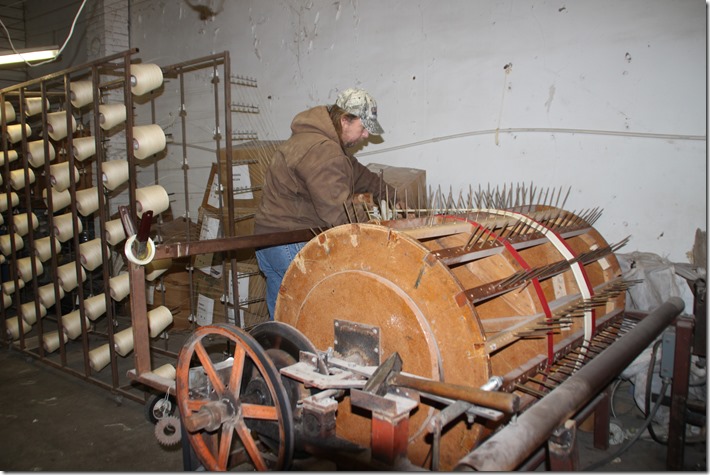 Up on the wall on front of this machine I saw all these numbers Clinton Dickson uses in making the warp. It all made no sense to me, but obviously did to him. I didn’t even ask! But I couldn’t help but notice-no computer, nothing fancy, just notes that made sense to the person in charge of the task. 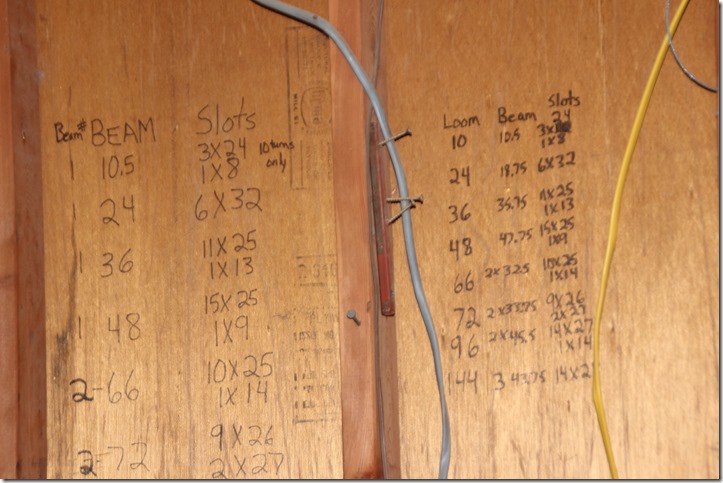 We headed back to the main building where the magic happens, turning the yarn into the beautiful rugs. On the other side of the office is a long room full of looms of all sizes, some empty, some with rugs under construction, and some with weavers quietly going about their work, throwing the shuttles back and forth through the warp, pulling the reed to pack the yarn, reversing the position of the heddles, the thin metal strips that run vertically in the loom, and watching the pattern develop in the rug. 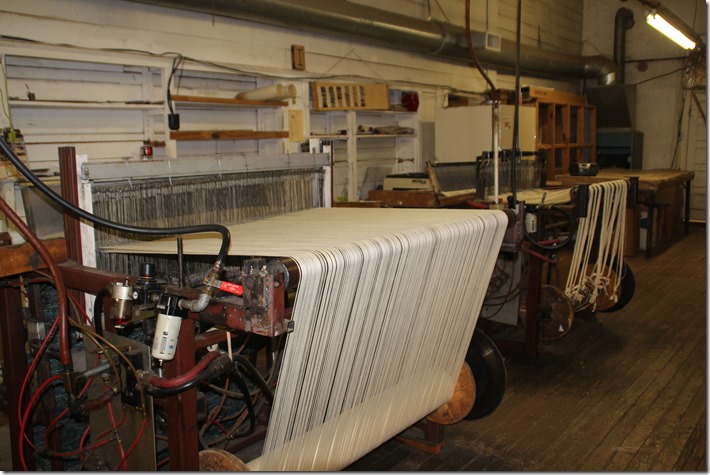 Anna Ruiz, who has been with the company many years, is working on one of the smaller looms. 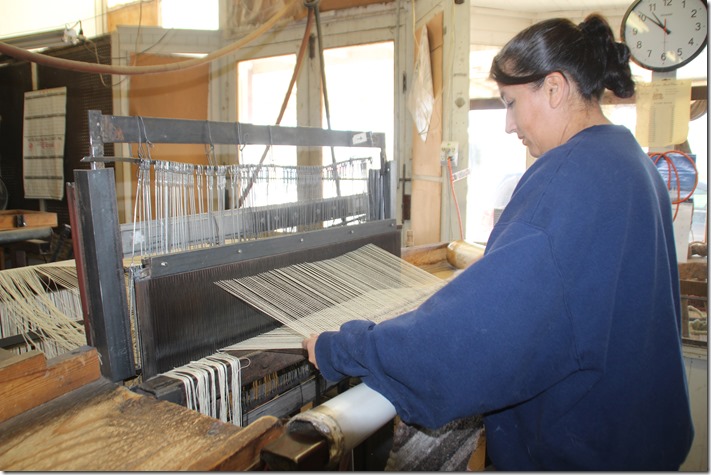 Elizabeth Maqueda has to work to get the shuttle all the way across the warp on this larger loom. 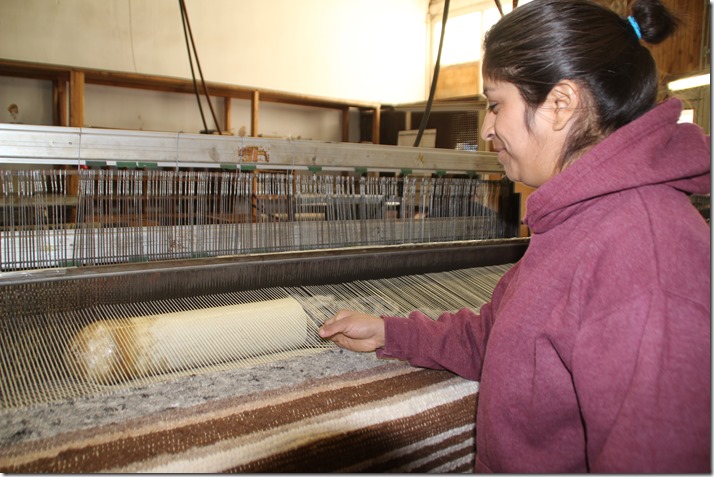 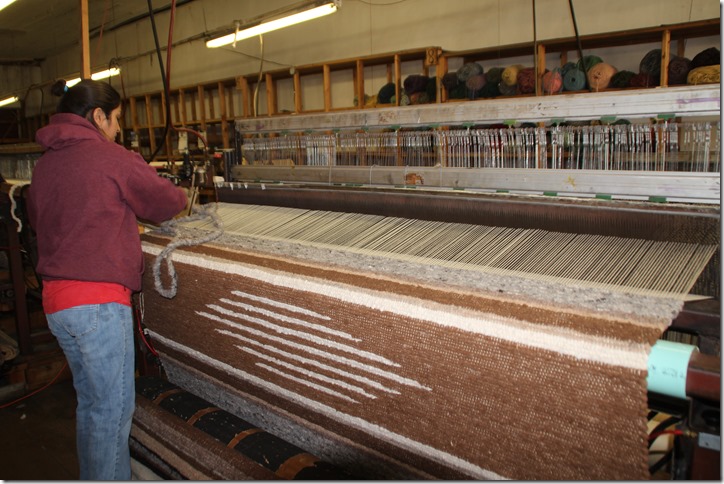 After the rug is taken off the loom, it goes to another room where Maria Campos and Veronica Ramirez convert the ends of the leftover warp into the fringe. 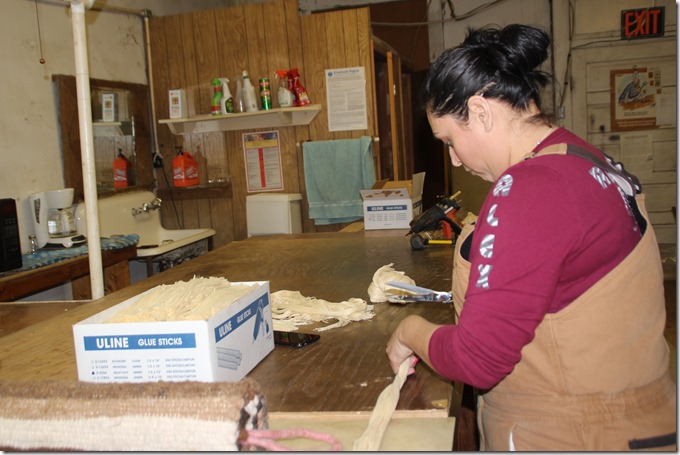 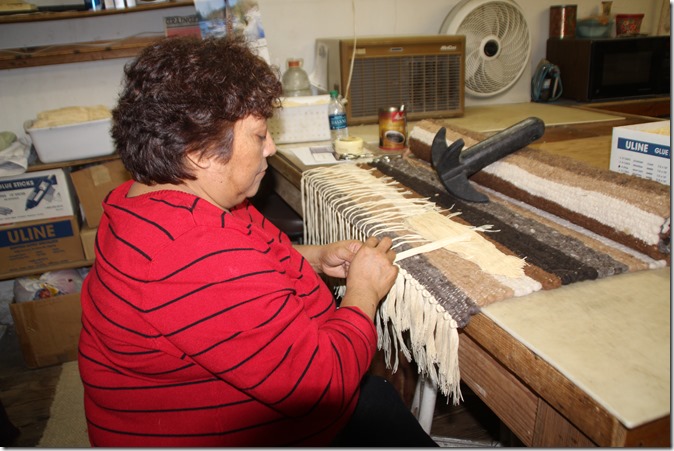 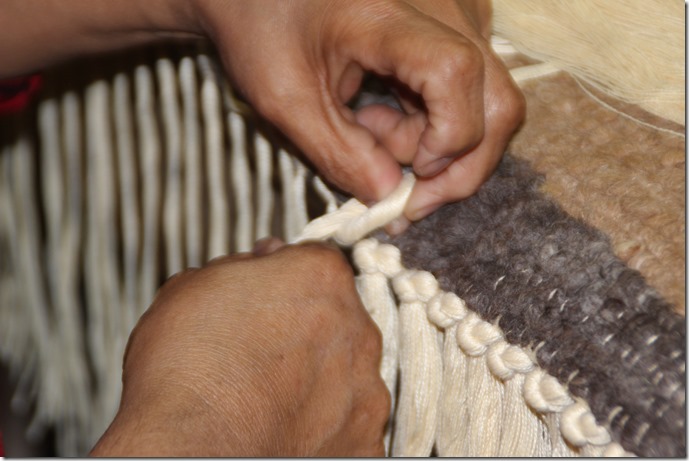 I asked about the colored yarn, and Reinhard said the only fleece that is dyed is wool that he buys already cleaned of its lanolin and kept on hand for people who might want a wool rug; his usual customers don’t raise sheep, so no one brings him any wool. Then if a color is requested, he sends it off to be dyed and then his people spin it into yarn. What fleece he does get is about 80% alpaca, 18% llama, and the rest is buffalo. He said there are 29 colors of alpacas, and probably about that many colors of llamas, which provide plenty of natural colors to work with. Buffalo rugs are all solid brown. 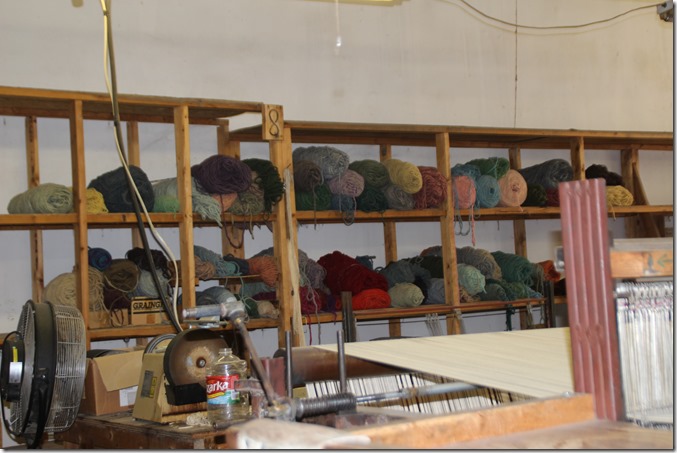 Reinhard has a catalog of designs to be woven into the rugs. and the rugs are made on special order for the customers who send their fleece, but he also has rugs made from the remnants of yarn left over which are for sale to people who just show up. On this visit there weren’t many remnants on display for sale, but that changes all the time. Remnants are also made into saddle blankets, which Reinhard said are good sellers. Customers can order a custom rug that will also be made out of remnant yarn, but you might have to wait a while for it to materialize. It would be worth the wait. 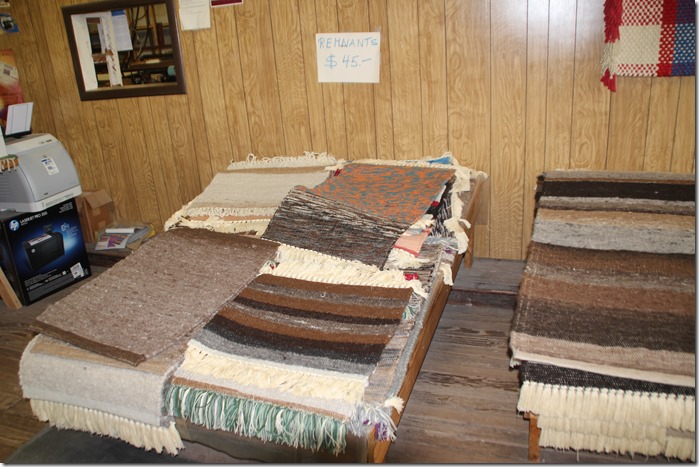 As I take in all this process, the skills and machinery and know-how that are involved, I wonder how long Ingrid’s will still be with us. Reinhard said that despite a decent number of alpaca and llama ranchers, the sheep ranching is slacking up, no one raises goats for fleece anymore, shearers are extremely hard to find, weavers and people willing to learn to weave are few and far between also, and there will come a time when he might like to close the shop and visit his native Austria again and have more time to visit his kids who live in Round Rock. Like so many industries that were once people-driven and required skill and workmanship, Ingrid’s could become just a part of history. What a loss that would be. 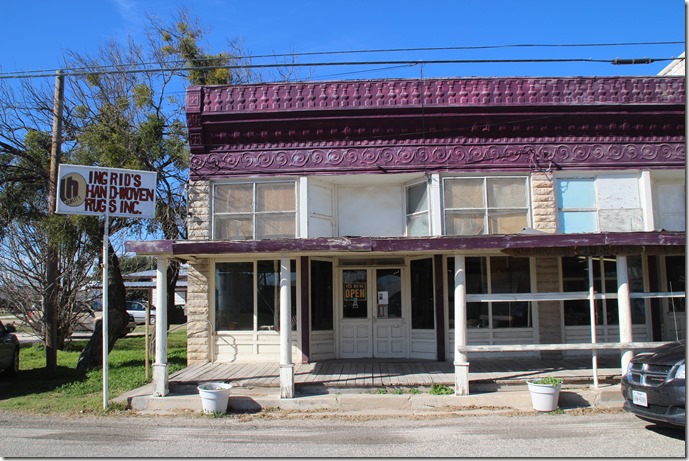 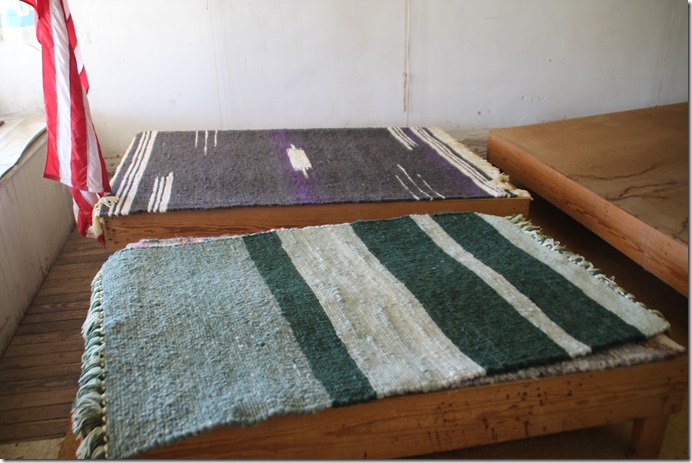 So, if you appreciate quality workmanship, would like something made by hand, enjoy owning an original, or want to experience a throwback to a time before mass-produced goods, a road trip to Paint Rock and Ingrid’s is in order. You will enjoy a living, breathing history lesson and can take something beautiful back to your home.

For another view of Ingrid’s, watch this Texas Country Reporter episode at  https://www.youtube.com/watch?v=X1QxHC-3DH8