During cotton-stripping time, these bright yellow bales starting popping up at the gins, outnumbering the conventional cotton modules we have all come to expect. Since I had written about the cotton modules earlier (“Cotton-Stripping Time in West Texas,” November 9, 2010), the time had come to look at the changes in the industry, and these cotton bales, cotton rounds, I was told they are really called, that are now taking the place of the modules. So, armed with camera and notebook, off I went to Parmer County Cotton Growers gin in Farwell, Texas, to find out the reasons for the change. 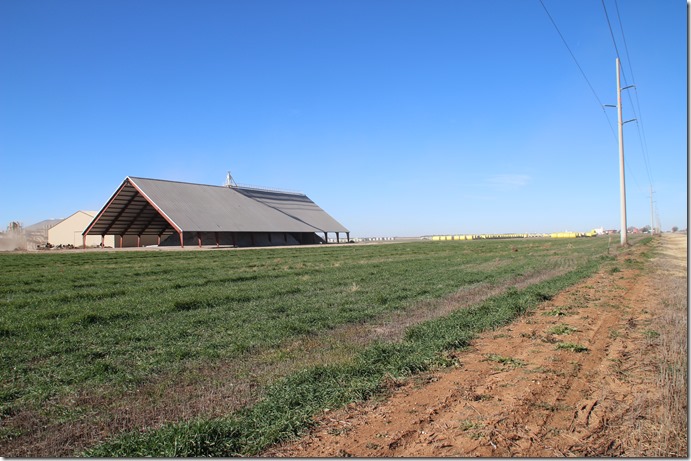 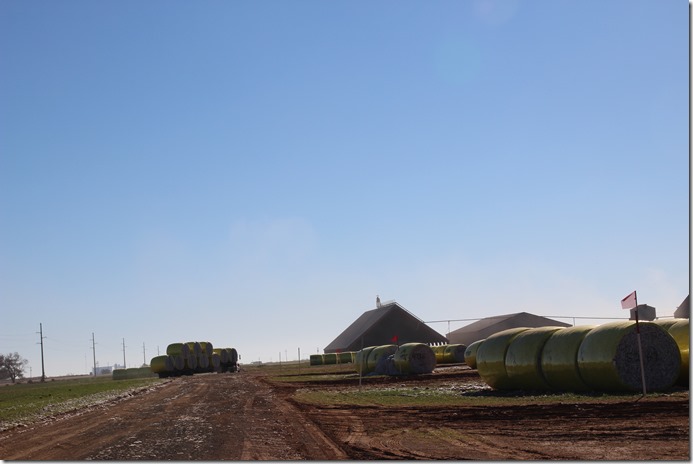 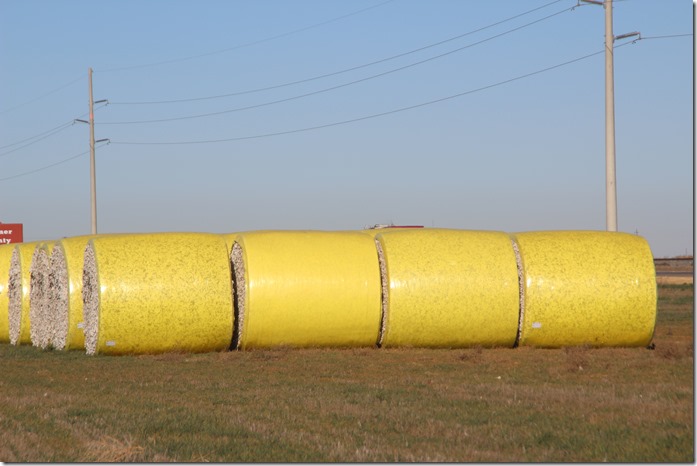 I checked in at the office and was given permission to take all the pictures I wanted. Off I went to get pictures of the trucks that were coming in one after another loaded with rounds. This day a steady parade came in from Dalhart, and I finally had to get out of the way for fear of being cussed and ultimately run over for being in the way! 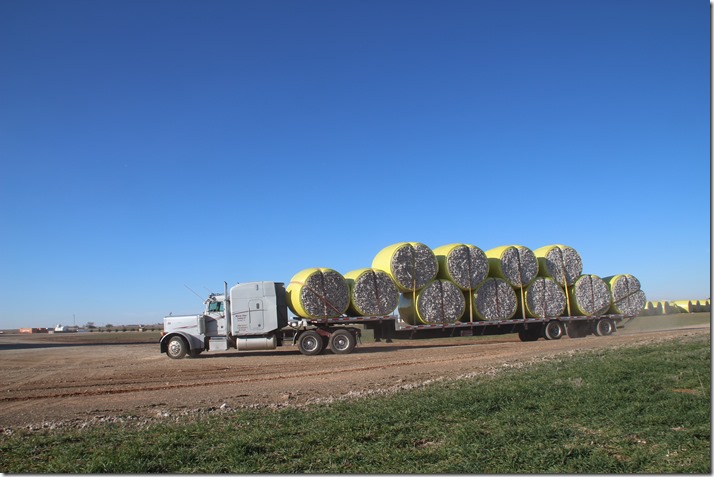 I watched the unloading of the rounds from one of these trucks, as they were lined up in a nice, neat row. 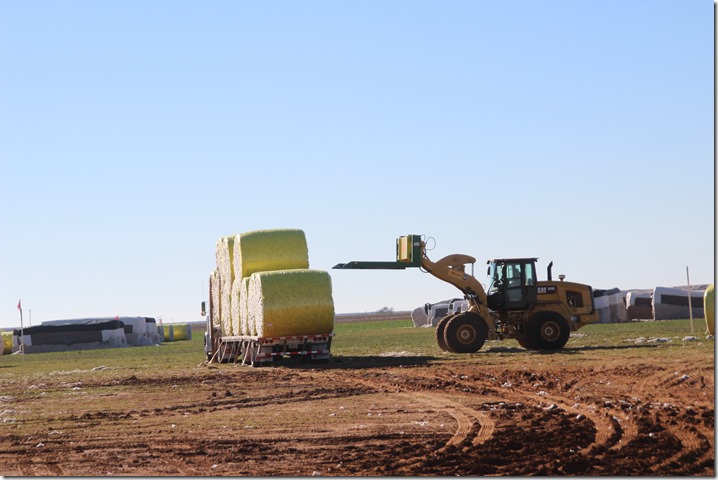 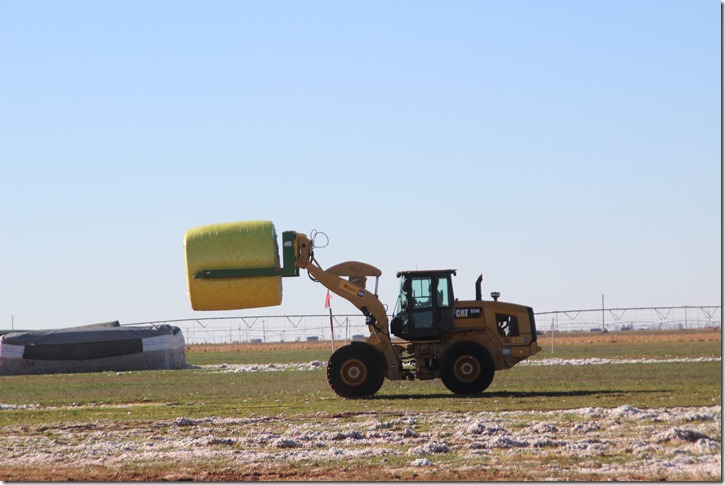 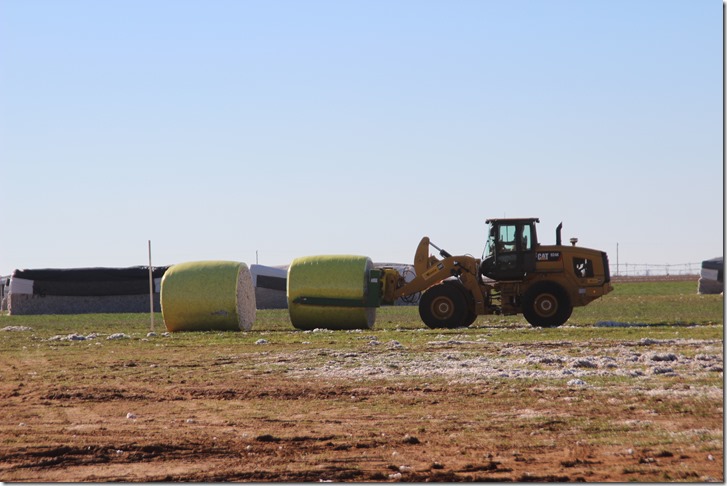 One advantage of rounds over modules is that they stay together better while waiting to become cotton bales, as you can see here. 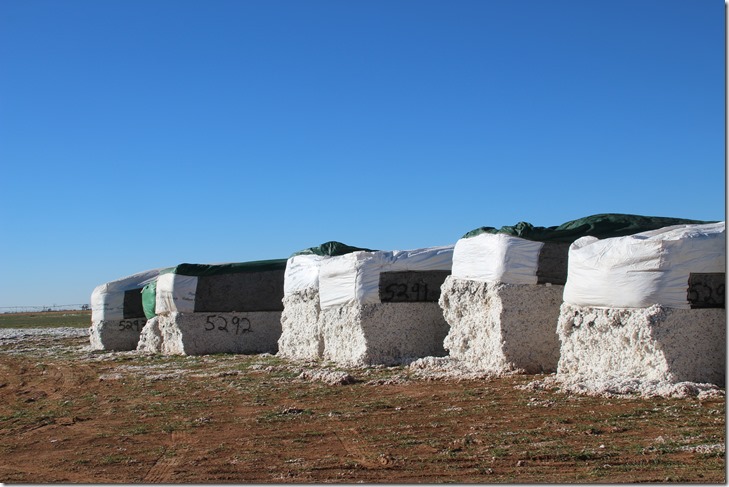 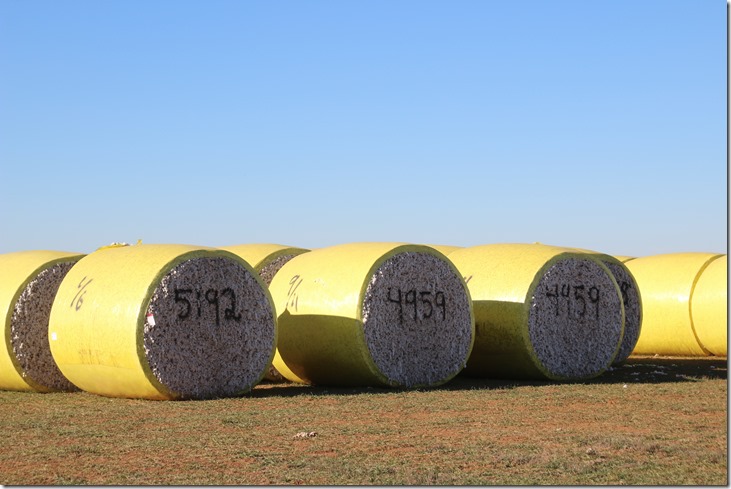 I went back to the office for details from Stephanie Baldwin who weighs and records the loads. 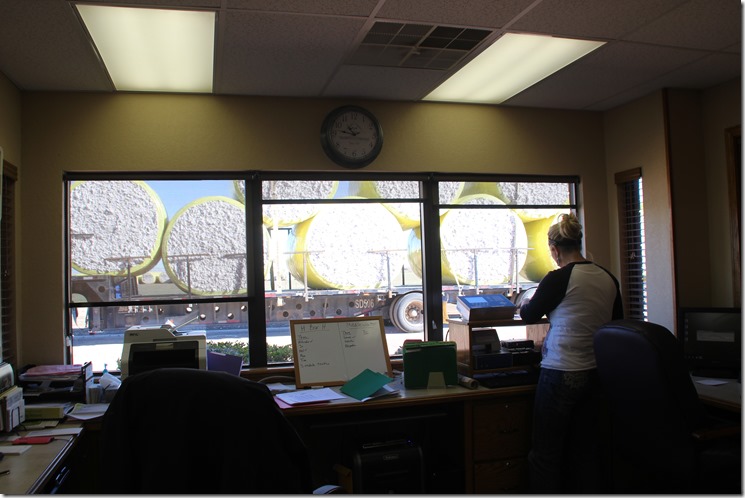 Manager Craig Rohrbach couldn’t visit with me as he was involved with a conference call, so Stephanie and Connie Taylor graciously answered all my questions. I learned that each round weights an average of 4200 pounds, taking four rounds to be equal to one module. Farmers in South Texas and the Gulf Coast converted to rounds about four years ago. Cotton grown in the south has a long fiber and is picked; cotton here has a short fiber and is stripped, which means the whole boll is picked. Pickers and strippers are similar but not the same machine, and the pickers were more easily modified and converted to making rounds than the strippers, which required a new component, a partial ginning apparatus actually inside  the machine. This, of course, adds to the expense of the machine. John Deere now has the only patent for this stripper, and the stripper was available as of last year. The machine is quite expensive; because of this, only farmers who plant large numbers of acres, say 3,000 or more, are the ones who can justify the investment to change over to these machines. Last year, the first year this new modified stripper was available, one was in use in this area. This year there were three. I managed to spot one in the field on my way home from the gin. 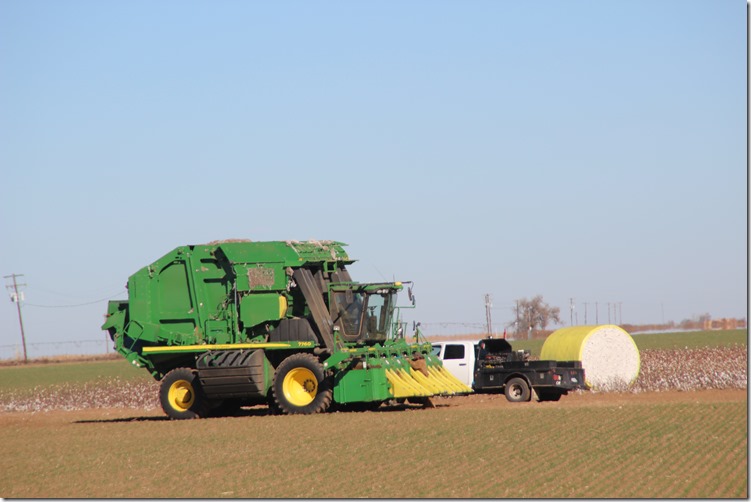 I suspect these strippers are the thing of the future, despite their cost, because they cut costs in other ways. One person can do the stripping, as opposed to three or four workers needed to produce a module, which also gives the advantage of continuous operation. Cotton is stripped, the boll burrs are pulled out by saws in the modified apparatus and discarded in the field, the cotton is formed into a round, complete with the pretty yellow covering, which is then taken to the gin where the seeds are separated from the cotton fiber and the cotton is put into bales. With modules, you have the stripper, the boll buggy in which the stripped cotton is deposited, the module maker in which the cotton is then dumped and compressed, the tarp that is pulled over the module, and the truck which takes the module to the gin, all of which need a driver or worker. With the modified rounds stripper, someone drives the stripper and someone drives the rounds to the gin, a much simpler operation.

The other advantage is that having all these steps take place within the one stripping machine avoids the complications provided by the West Texas wind, which blows the cotton as it is loaded into and out of a boll buggy as well as out of the module truck, not to mention blowing the tarp off the module before it is ginned. 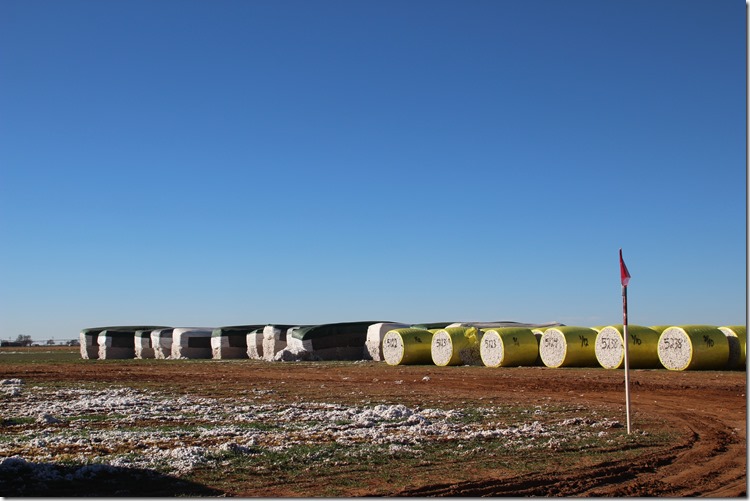 Cotton modules will not entirely go away, but cotton rounds will become more prominent in cotton farming in the future. 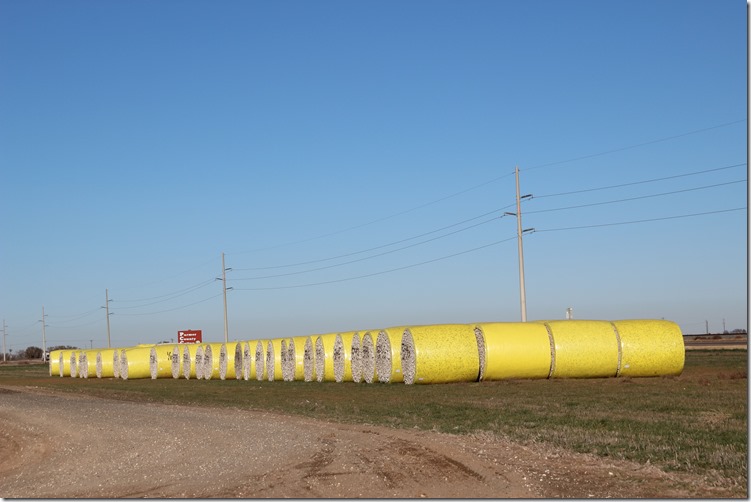 My thanks to Stephanie Baldwin and Connie Taylor at Parmer County Cotton Growers and Mark Balko of Ray Lee Equipment Company in Muleshoe for educating me about cotton rounds and cotton strippers.