Mount Pleasant is east of Charleston across the Arthur Ravenel, Jr. Bridge. The former John P. Grace Memorial Bridge built in 1929 across the Cooper River had become insufficient for traffic and in need of major repair and was replaced in 2005 and renamed for South Carolina State Senator Arthur Ravenel, Jr., who was instrumental in establishing the South Carolina Infrastructure Bank to finance the rebuilding of the bridge that connects downtown Charleston to Mount Pleasant across the river. Mount Pleasant is named after a plantation founded there in the early 1700s. 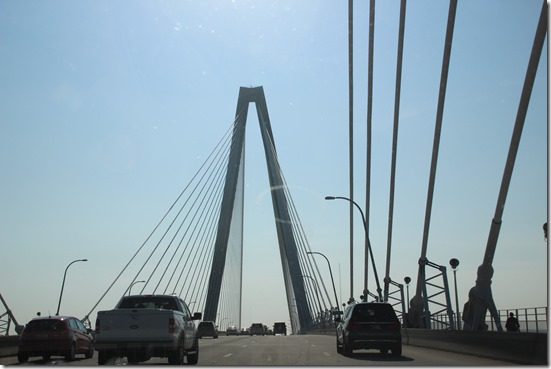 We had admired the bridge from the ferry on our visit to Ft. Sumter, so it was nice to need to travel across it for the trip to Boone Hill Plantation and get one more shot at buying sweetgrass baskets, as Mount Pleasant has prime basket-shopping opportunities as the basket makers set up shop along U.S. Highway 17.

Boone Hill Plantation and Gardens is a working plantation, said to be the oldest of its kind. The drive up to the center of activity and the house takes you through a half-mile long live-oak lane. My picture does not do it justice; you just have to drive it. 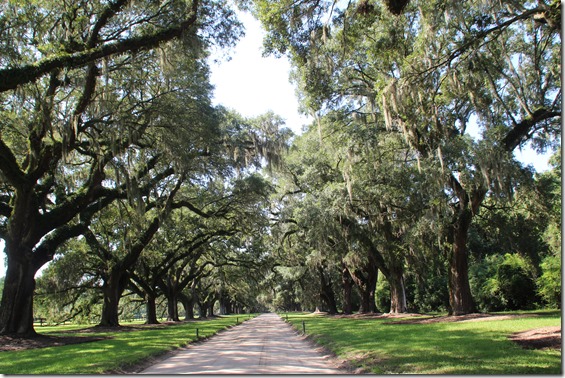 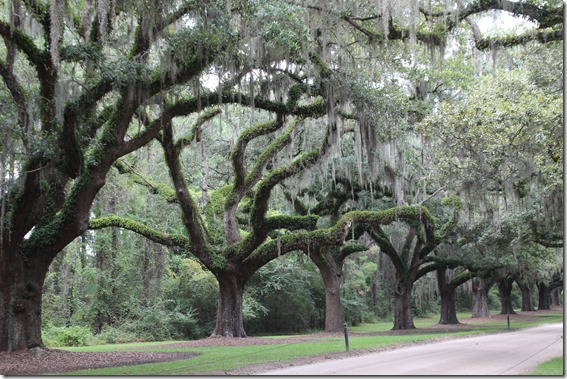 Once again, like the other plantations we visited, the original house is gone. This 1936 mansion now stands, and we took the tour and saw different furnishings compared to the other homes. 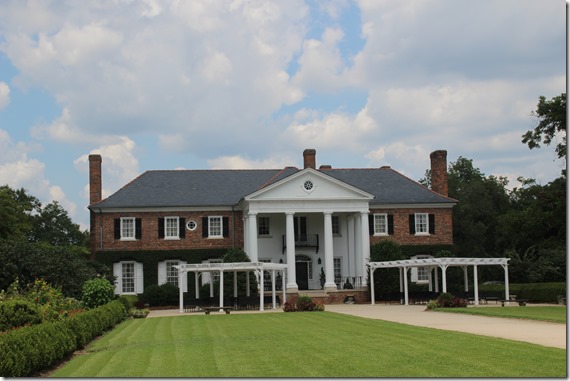 Lined up to the left of the house as you drive in under those trees is a line of brick buildings, the homes of what we were told would be the house slaves, with the field hands having less pleasant accommodations away from the house closer to the fields where they worked. Having these brick slave houses was a sign of wealth of the plantation. Each house was one large room which now contain displays about black history during that time period. 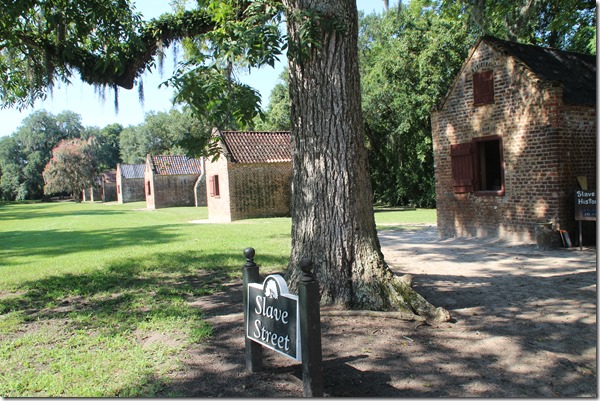 We watched the Gullah performance given at one of the slaves homes which tells the history of the descendants of the slaves in the low-country who mostly came from the African country of Angola, who eventually came to be known as Gullahs. The Gullah has come to be one of the most distinctive regional cultures of African American history and is central to the history of Charleston and its sweetgrass baskets. 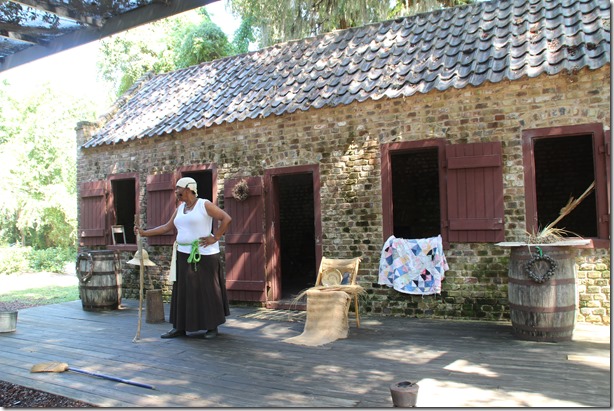 The plantation had a cotton gin that was under renovation, a butterfly house, a tour through their fruit fields and sites having been used in movies, perennial gardens, a gift shop, stables, picnic grounds, sweetgrass basket sellers, and more oak trees.

We were hugely entertained when we were admiring some baskets at one vendor’s counter and a woman asked the price of one of the larger, more elaborate baskets. The maker said, “275,” to which the shopper almost dropped her packages as she boomed, incredulous, “DOLLARS?!” Rest assured the ones we picked did not cost that much. And she didn’t buy that one!

We ate at the Boone Hall’s Farmer’s Market across the highway from the plantation, and then did stop at two of the vendors set up on the highway. We both bought from Mr.Elijah Ford, who very graciously made us an offer we couldn’t refuse. 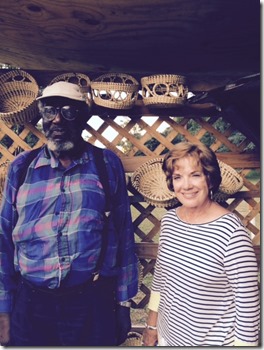 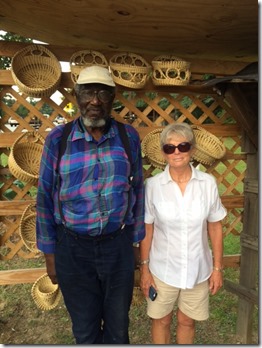 Over the bridge and back to Charleston where we walked again to enjoy the charm of the city and more seafood. We saw more than one of these mailboxes, which I thought were historical and pretty. They seemed to be more common on the more expensive homes. 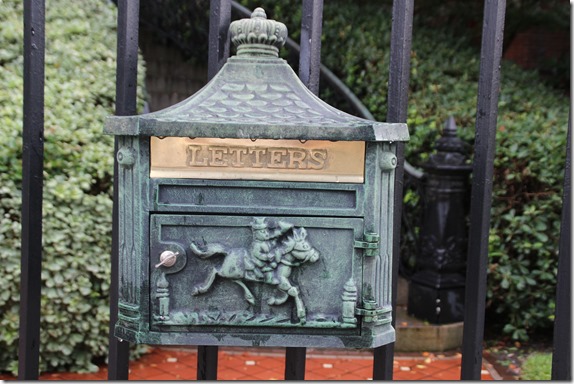 And it was then back to the B&B to get ready for the trip home tomorrow. We double-checked our flights and discovered to my dismay that my flight had been changed! Not Elaine’s, which took her to Chicago and then Houston. Mine, for absolutely no logic, rerouted me through New Jersey, for crying out loud, with a nice three-hour layover, then to Houston for a two hour layover, and the back to Lubbock.

The next morning I think we were up by 3 am to be sure we had time to find our way to the airport. Which was a good idea, since we took a wrong turn and wound up going over the bridge again the wrong way. At the airport we both got  to our right ticket counter, but in my inexperience I couldn’t get the computer to print my boarding pass and some man behind me took pity on me and did it for me. Panic-stricken, I rushed to the gate and off I went. Took a picture of the sunrise before landing at Newark with lots of time to kill. 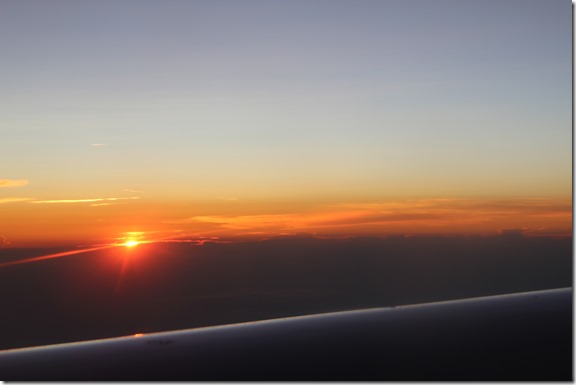 I could see New York from the airport and did lots of walking while waiting for the flight. 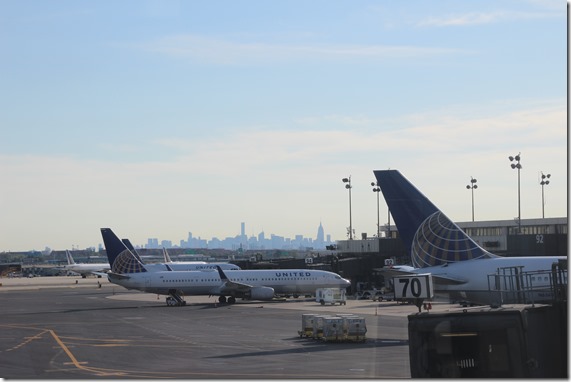 And then it was hurry up and wait in Houston. By that time it was dark and I was out of the humor to take pictures, so I just waited. Bill was waiting for me in Lubbock. The baggage was unloaded in record time, all things considered, and by the time we pulled into the driveway, it had been about an 18-hour day. Ah, the convenience of flying.

But the trip? Memories that were classic, like wadding in the high water, all the places we visited, and the laughs we shared. Going to the trouble to go in the first place? Priceless.