Day 2 started with the breakfast at Junior’s that I mentioned before. And by the way, you can tell I don’t frequent McDonald’s very often-I stand corrected as to the proper spelling!

But I digress. As the day started, we passed an intersection complete with a NYC traffic cop. Buildings were decorated with their safety nets, the ubiquitous fire escapes. I share these pictures with you under the heading of things we don’t see at home. Not in Muleshoe, anyway. 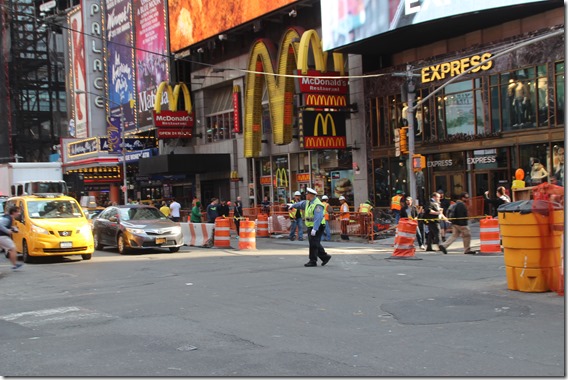 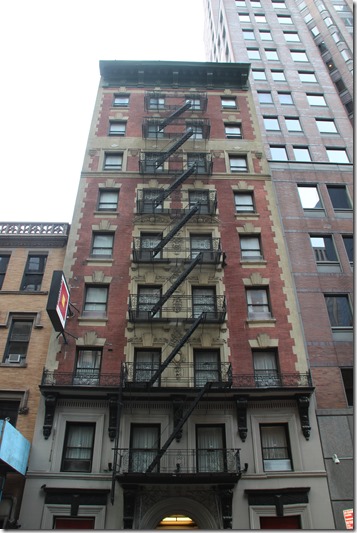 We could see a church nestled between the more modern buildings and decided to check it out. 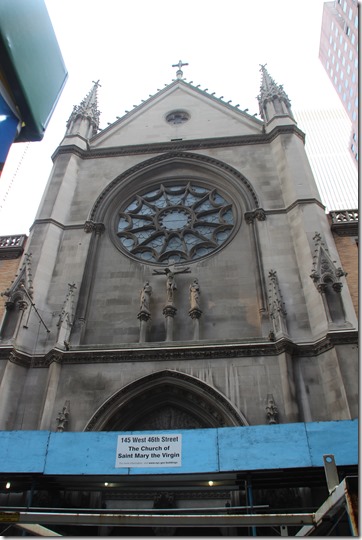 The Church of Saint Mary the Virgin, an Episcopal church, was founded in 1868 and the building went up in 1894-95. Even though it was scaffolded and under repair, it was business as usual for this house of God. A few people quietly moved about the sanctuary; a few homeless people slept in the pews. Jesus would not have turned them away; neither did they. 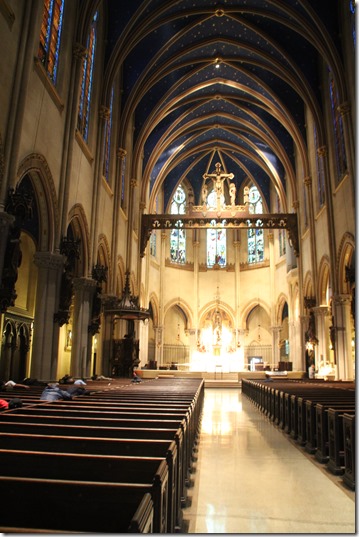 Our next adventure was figuring out the subway, 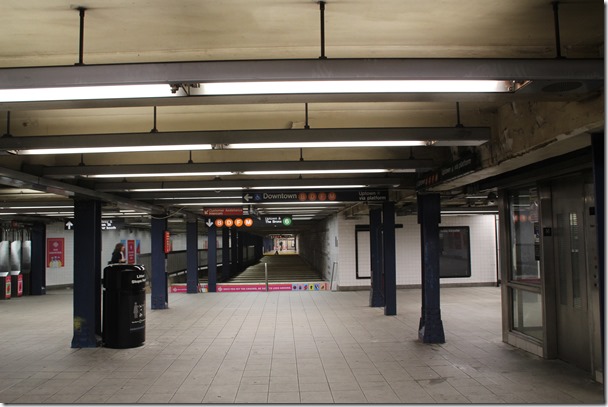 which we did and rode to the Municipal Building, 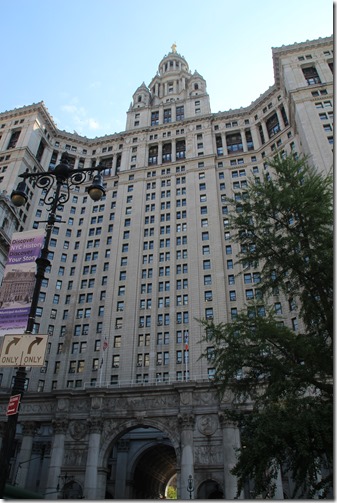 which also took us to where we would start out walk across the Brooklyn Bridge; us and a small army of other like-minded tourists that day. At one point about 15 giggling middle school-age kids came sailing past with their backpacks. I wondered if they were walking to school until I realized they were being herded about by a teacher. Field trip, I guess. 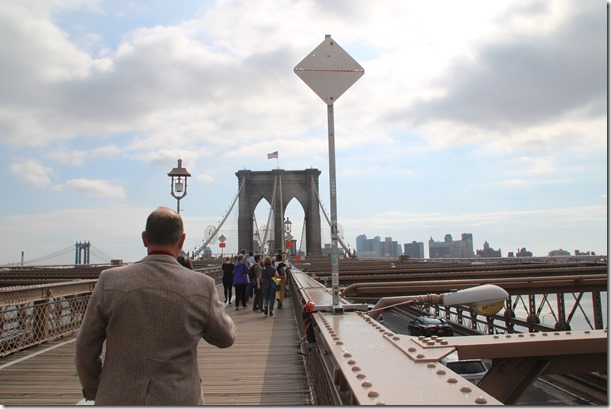 The bridge is only 1, 595.5 feet long, but Bill was convinced it was at least a mile or so. It really wasn’t a bad walk; the hardest part was dodging bike riders and tourists with selfie sticks. Conventional wisdom says that the most scenic route is to go from Brooklyn to Manhattan. We, of course, did just the opposite, but we saw the Manhattan skyline anyway from the Promenade after we were over the bridge. More about that in a minute. The pedestrian walkway was up above the street and cars, as you can see here. 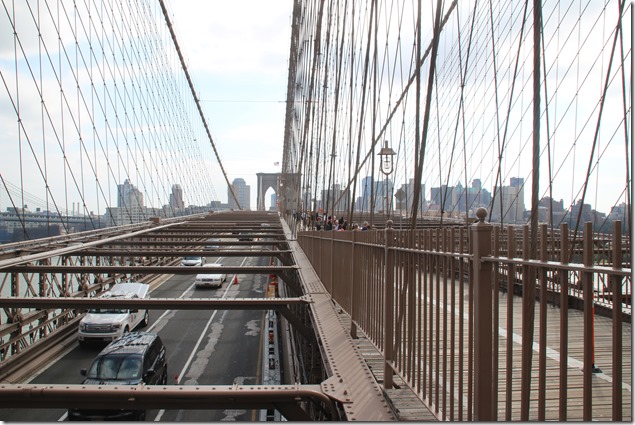 This is facing Brooklyn. 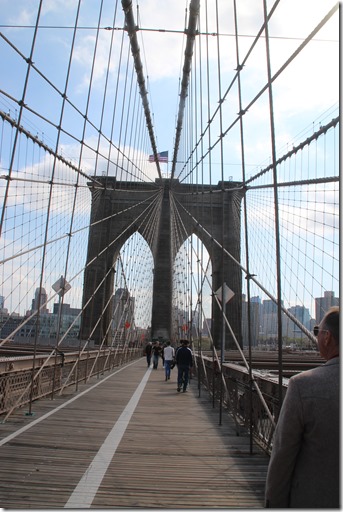 I turned around later and took this shot, which is facing Manhattan and the next wave of walkers. Notice the policeman on duty. 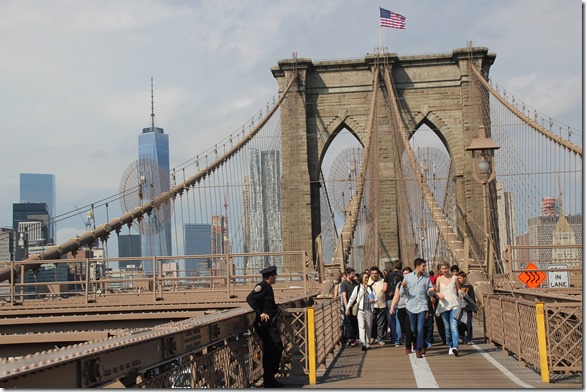 We would not have experienced the bridge at all by just driving over it. I highly recommend the walk. 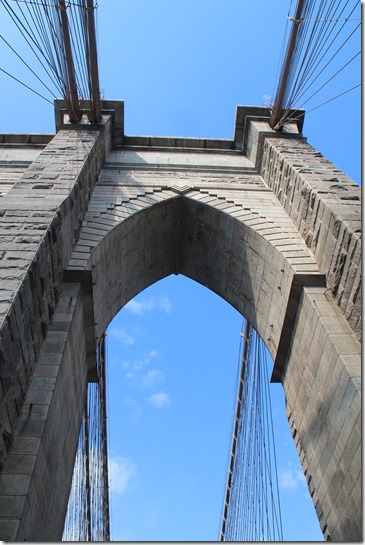 Noise on the bridge, as you would expect, is loud and continuous, just like the noise in the middle of Manhattan. But as we came to the end of the bridge, we could go left or right. We chose right, which took us down and under some street overpass. When we turned to come up out from under the street, it was like Dorothy waking up from black and white Kansas to Technicolor Oz. Peaceful, quiet, unhurried, natural. 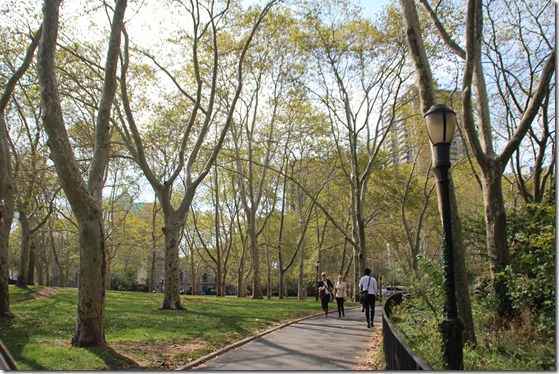 Alas, I did not write down the name of the park, but it was lovely. Bill sat down to rest after our hike over, and I went to look around to figure out where we might want to go next. A woman was walking her dog in my direction, so I stopped her, figuring she was a resident and could help out. The camera around my neck as well as the fact I stopped her at all was of course a dead give-away she was dealing with a tourist, and she was very nice and willing to take the time to give me some directions. She pointed out where to go to find Henry Street and the Promenade and where we could catch the subway back to Manhattan. Naturally she asked where we were from and when I told her Texas, she smiled and said yes, the soft accent is a tip-off. Then she says she has a son who lives in Texas. Really, I say, what town. Kyle, she says. Kyle?! Are you kidding? My son lives in Kyle! I couldn’t believe it. The connection from Texas to Brooklyn is ironic enough; that both our sons live in the very same town in Texas is just too cool! Unbelievable. The small world syndrome really is alive and well.

Her information was very helpful and off we went to find Henry Street. Turns out we are in the Brooklyn Heights area of Brooklyn. It was charming; clean and neat with streets lined with beautiful brownstones and trees. We asked a man we met some questions about the homes and he said it is an area that has been sort of reclaimed and cleaned up. He pointed to a three-story residence on the corner and said it recently sold for 25 million dollars! I don’t think we will be moving there any time soon. 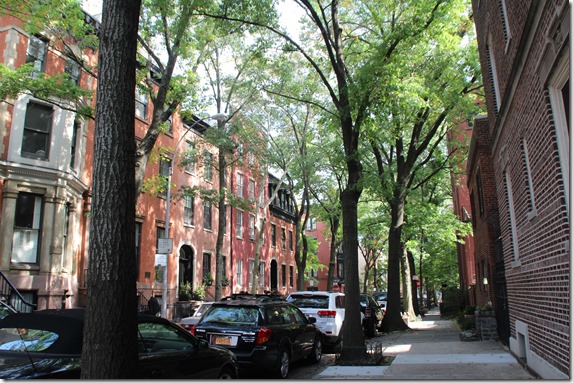 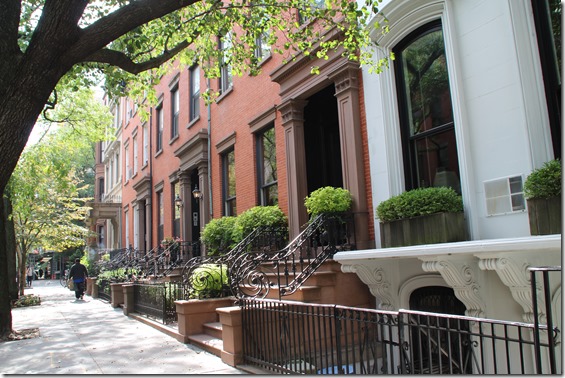 We ate lunch at Sociale, a nice little corner open air restaurant and watched the people go by. The pace was definitely nothing like what we had seen on the other side of the river. 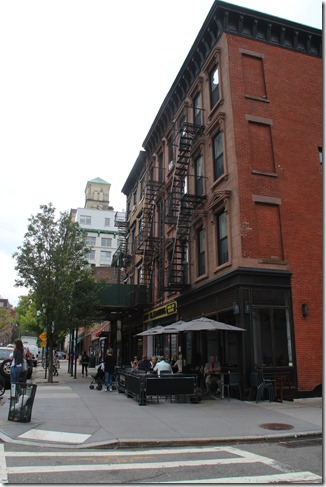 We made it down to the Promenade, a long wide paved stroll along the East River, much like a long park where people could walk or sit or whatever. Or walk their dogs, as this dog walker was doing when we came along. Across the river was the Manhattan skyline and to the end was the Brooklyn Bridge. 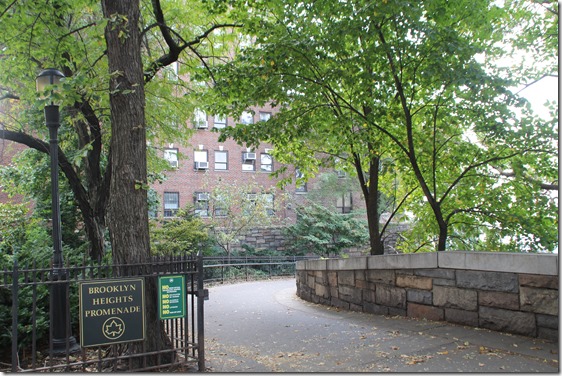 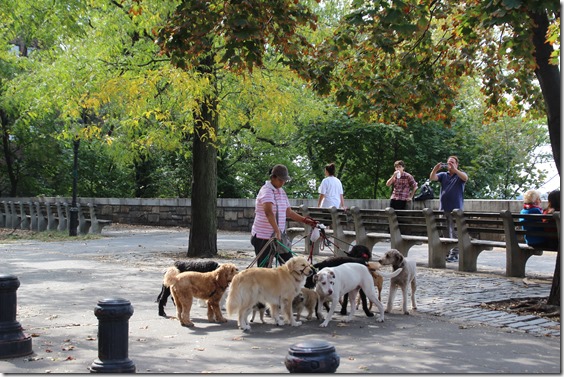 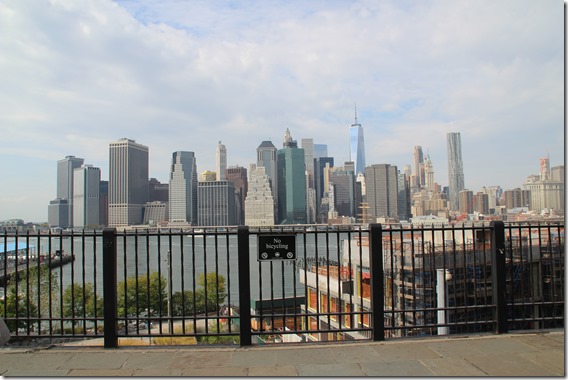 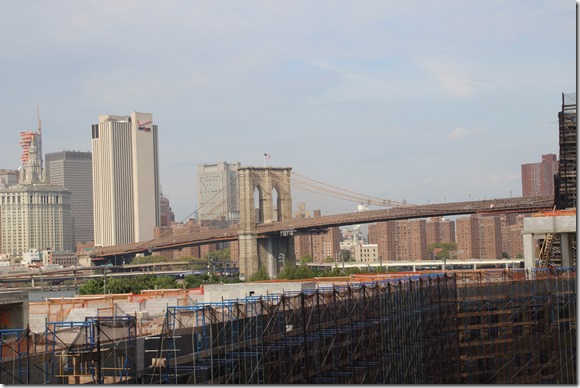 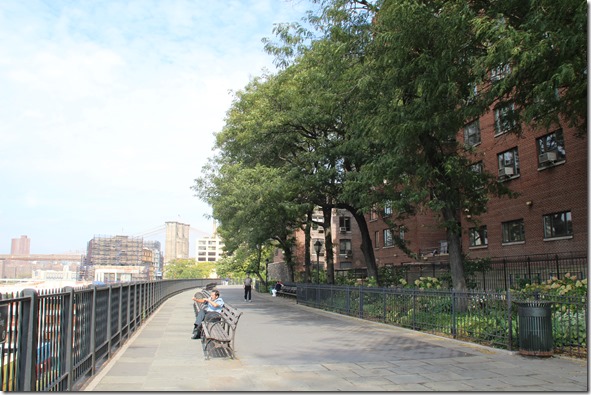 I couldn’t convince Bill to walk back across, and we knew where to catch the subway, thanks to Mrs. Norton’s good directions, so that’s what we did. 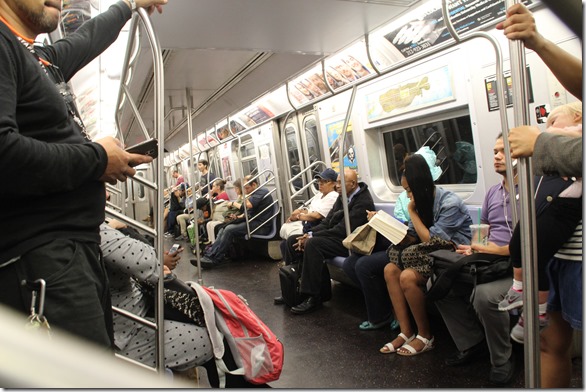 We exited the subway fairly close to Penn Station, where we would catch Amtrak in the morning for Niagara. We wanted some idea of where it was in relation to the hotel and figured out by the time we walked back to the hotel that we definitely would use a taxi in the morning. And for some reason I did not take a picture of the station. I’m not sure why, but I didn’t.

Tonight was The Lion King and since they won’t allow pictures of the performance, about the best I could do is this nice shot of the theatre and one of the signs on Times Square. 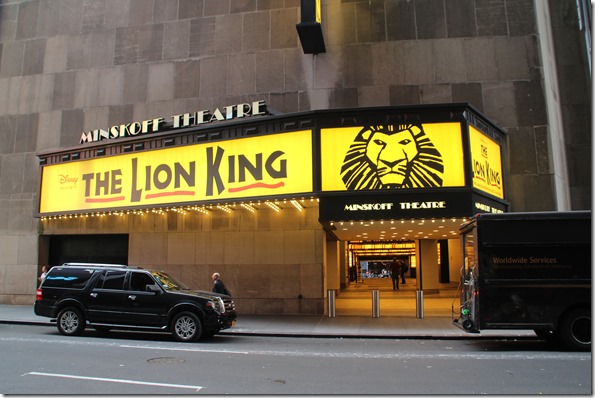 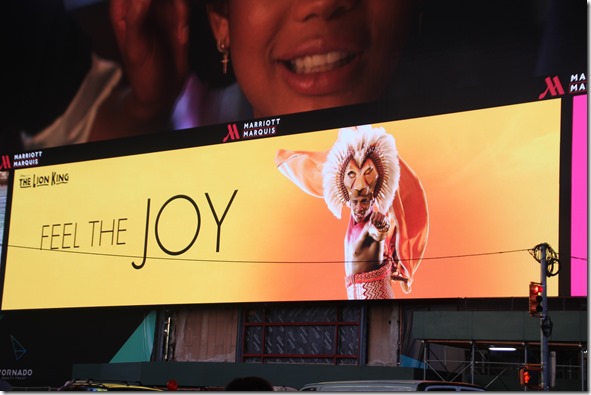 We picked up the tickets an hour before the performance as instructed and then dodged the rain while we waited for time to go in. We stopped at a very busy, very big restaurant named Carmen’s and struck up a conversation with two young women who were  waiting for a table. I did get them to take this picture with my phone before the performance. Not that great, but Bill wouldn’t let me take my camera since I couldn’t take pictures inside. And we made yet another connection with Texas, as the husband of one woman had been stationed at Ft. Hood. 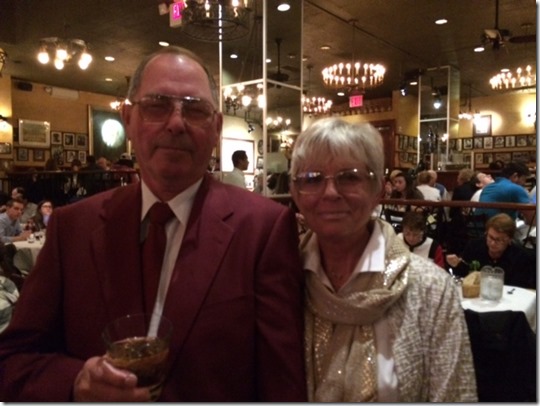 Once in the theatre and while waiting in line to go to our seats, we visited with a couple from Aruba, which was interesting, and then during intermission I visited with a woman from Magnolia, Texas, yet another connection to home.

I did take this picture of the stage with my phone before the performance. Lots of phone pictures were taken then, but everyone seemed to behave during the show. The designs in the curtain were also part of some of the designs later during the show. If you ever have the chance to see this musical, don’t get too close to the front. To really see and appreciate everything, about mid-way is better than being right up in front. You will miss things if you are too close. 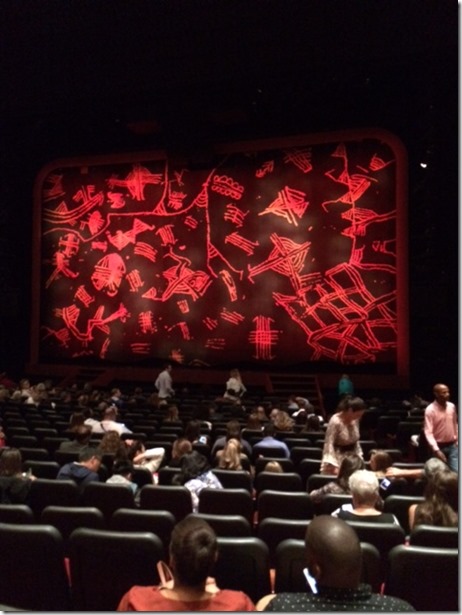 Everything about it was thrilling again-the animals making their way to Pride Rock by way of the aisles, the music and singing, the dancing, the stage changes, the story itself. Everything. The production values were what impressed Bill the most, especially when Mafusa talks to Simba from the sky, which is truly a fascinating scene. Since this was my second time to see it, I knew what was coming as it played out, but that also gave me the advantage to watch more carefully and notice some things I missed the first time because there is just so much to watch. The whole thing is so spectacular I would go again.

After the play, it was back to the room and to bed. Big day tomorrow to Niagara on Amtrak. Stay tuned.