Look What My Husband Built For Me!

After a visit to my friend Shari’s Victorian/shabby chic/eclectic-style garden on the banks of Lake Travis the other day, I was inspired to reinterpret one of her pieces of landscape art to match the southwest/rustic/desert/xeriscape-style of my garden. This is what she has in her garden: 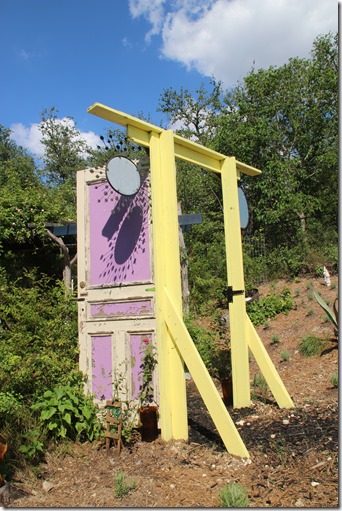 Now this may not be your cup of tea, but in person it was outstanding and gave quite an unusual look to her garden, which is completely different in tone and style to mine. I couldn’t quite see this complimenting my cactus and rocks. But something more rustic and simple would. A sturdy arch constructed of cedar posts would do the trick.

The trouble was I didn’t  have the skills, know-how, and strength to pull it off, which is the case with most of my grand ideas. So I had to convince Bill that this was a project worthy of his expertise gained from building highway bridges in his youth, his mechanical/carpenter experience and a fair amount of inventive Aggie engineering. All of this accompanied by the occasional frown, a rolling of the eyes, and a resigned willingness to get it done.

Bless his heart! He has, over the years, willingly and lovingly with the acceptable amount of grumbling, hauled horses back and forth all over the state of Texas, endured sharing his home with untold numbers of cats, dogs, and even tropical fish, loaded and hauled tons of rocks, moved plants-mostly cactus, built two greenhouses, and in general put up with my bright ideas for really cool projects. And this time, after a quick roll of the eyes and a smile, he agreed once again to bring one of my visions to life.

For the first arch I located and bought the posts in Clovis. On the trip home with them, the Yukon had a flat. We brought the wood for the second arch home from a cedar yard in Lampasas and had a flat on the trailer! I know how to change a flat, but being the gentleman he is, he did the work then, too.

We worked in the cool of the mornings on the arches, me being the helper/go-fer and Bill getting to do the heavy labor. I did, however, dig the first two post holes. I felt pretty useless the rest of the time, holding materials, picking up dropped screws, and offering the occasional unrequested comment…

And then, finally, they were done. 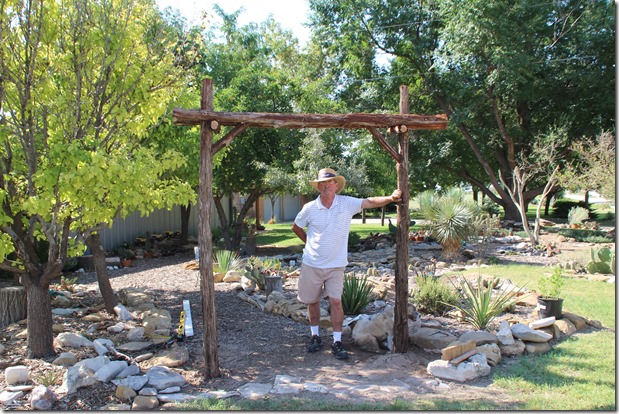 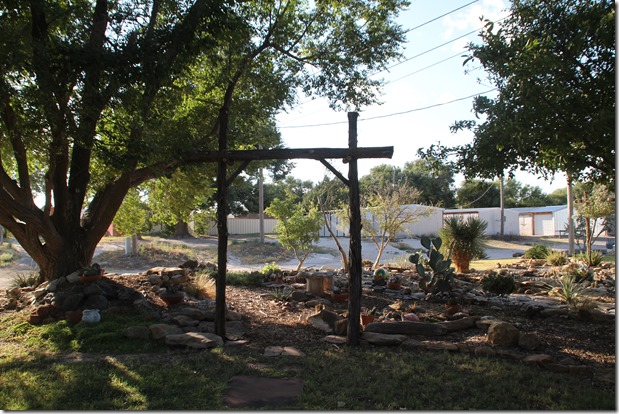 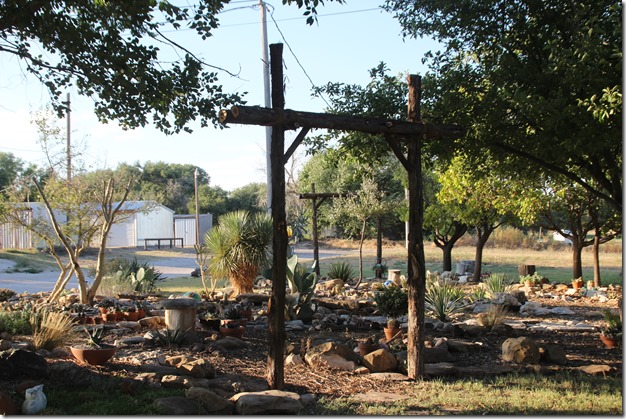 I don’t think the pictures show their full effect; seeing them in person does. If you are in the neighborhood, stop by and take a stroll through them into the garden. You’ll see. They really are neat!

Bill doesn’t always have the patience of Job, but he is the best, most understanding husband in the world. He must be, having put up with me for these past 50 years, right?

And if you want to see the step-by-step process so that you, too, can bug your husband to build some for you, check out Cactus Are Cool in a few days on this same website for more pictures and instruction.