I have been watching and impatiently waiting for this cactus to bloom, and finally it did. I suspect our current overcast skies and lack of sunshine delayed the unveiling, but bloom it did. And it even stayed open for a couple of days, a nice plus.

Leuchtenbergia principis is a mouthful, so you can see why it also is called agave cactus. It is not in the agave family, but its shape and growth habit resemble an agave, so there you are. To some taste, the soft, papery spines on the ends of the fronds make it look a bit unkempt and messy, but the contrast of the pink tips on the green fronts make it a distinctive plant.

Alas, I did not document when I acquired either plant, but I I think the big one may be close to ten years old. This is not the first time it has bloomed, but I don’t think it bloomed last year. The smaller one is maybe four years old. This is a slow grower, which is not a bad thing, but it won’t bloom until it is after about five years old. 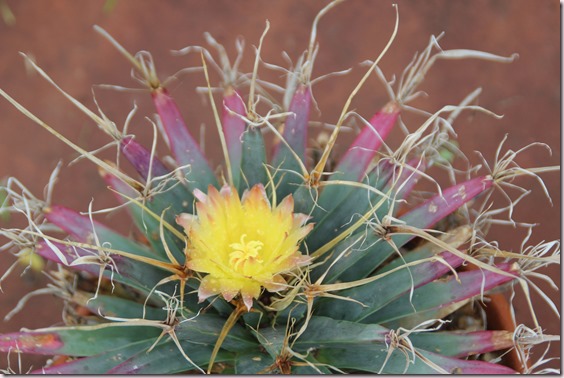 This plant is indigenous to North Central Mexico, in the San Luis Potosi, Chihuahua area and is said to tolerate temperatures as low as 20 degrees F. I am not willing to find out, so yes, I bring mine in for the winter. I have discovered through trial and error that it takes a bit  more water, and yet you do need to be careful not to over water and rot it Too much water brings out yellow at the ends; gentle sun helps with the pink touch; not enough water dries out the ends.

Agave cactus aren’t something you generally see at the big box stores, and they aren’t real common at cactus nurseries, so if you come across one and are thinking about giving it a try, you might want to latch onto it.

Then be prepared to wait for the bloom.