Olabelle and the Muleshoe Library

If you read last week about Magann Rennels (Need An Answer? Ask Magann), you know her mother was an interesting person with a story worth telling and who has also made a lasting contribution to Muleshoe. Olabelle’s family originated in deep East Texas in the town of Jefferson. She was a New Year’s baby, born on January 1, 1906. The family moved to Tahoka in 1915. In 1935 she moved to Austin to work as campaign secretary for state Senator George H. Nelson from Lubbock. She did such a good job for him that she landed a job as secretary for Governor James V. Allred and later as personal secretary to Governor Allred’s wife. Her duties involved serving as hostess in the Governor’s Mansion, even when Eleanor Roosevelt came to Texas for a visit and Mrs. Allred was recuperating from childbirth. She went on to meet a veritable who’s who in early Texas politics: John Nance Garner; Olveta Club Hobby; an up-and-coming LBJ, and many others. This at a time when Republicans were few and far between in Texas. She never mentioned to Governor Allred that she happened to be a Republican. Even though Olabelle suffered with muscular dystrophy, she never complained. But navigating the ornate staircase in the Governor’s Mansion proved to be too strenuous, and she was forced to leave that job behind but was still involved with Texas government, this time working for the State Board of Control. 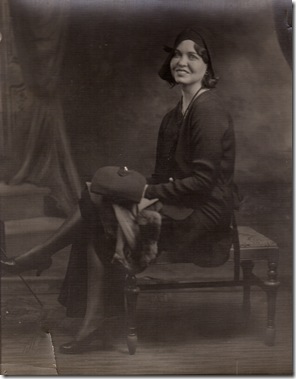 Olabelle in 1929 at the age of 23. In between those two jobs  she met her future husband, Gil Lamb, on a blind date in O’Donnell when Gil was working as an actor for one of the traveling tent shows. Eventually  they moved from Austin to Muleshoe, and Gil got into broadcasting. 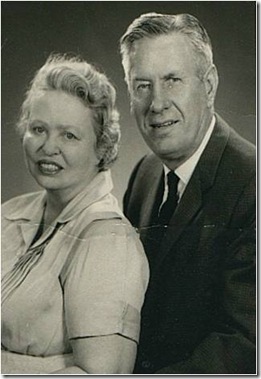 Now, remember, Olabelle came from Jefferson, and Jefferson had a Carnegie Library. A Carnegie library might not ever happen in Muleshoe, but Olabelle knew the advantages of a town library, so she thought Muleshoe needed one, too.  She was told pretty bluntly that Muleshoe didn’t need a library. What passed as a library at the time  was books  housed in Lela Barron’s abstract office. Later the books were moved to a forgotten little room in the court house with no great supply of books and resources, no card catalog, no organization, and no real librarian.  Both the Muleshoe Study Club and the 1939 Study Club volunteers worked to keep what they had usable for the  public and Minnie Solomon served as a librarian. Later the Friends of the Library and others saw to it  that  the Hunkey Electric Building in the Lenau Addition was purchased in 1964 to house the books from the court house.

Well, that wasn’t enough for  Olabelle, so she decided to pursue the library idea further. She became the chairwoman of the Muleshoe Study Club’s Library Committee, and the fight was on. One of the first things she did was to start the Friends of the Library group who helped her with this mission. Remember, this is the woman who recognized that women weren’t always taken seriously by the men who ran things. Also remember this is the woman who had ties to state government, having worked in Austin. Through the Texas State Library, Olabelle set up a meeting for the state librarian to visit with local groups like the Rotary Club, Bailey County Commissioner’s Court, the Chamber of Commerce, and others  to discuss the possibility of establishing  a real library. Her efforts were met with ridicule from some individuals. If people wanted a book, she was told, they could just go to Lubbock.

The Texas State Library also demonstrated the use of bookmobiles for rural areas, so an agreement was struck through commissioners’ courts in the counties of Bailey, Cochran, Lamb, and Parmer for a bookmobile to serve small communities in those areas.  The daily destination of the bookmobile would be announced on the Muletrain and a driver, first Larry Hartsell and later Tommy Black and Ruby Henderson, along with a librarian, Georgia Pena and later Lorene Sooter, would pull up to the back of the Hunkey building, load up with books, and be on their way to places like Morton, Hart Camp, Lums Chapel and Three Way as well as Muleshoe. The bookmobile ran for 14 years from 1964 to 1978.

It happened that the day of that  meeting with the Texas State Library was very cold and Olabelle contracted pneumonia. The muscular dystrophy that she continued to suffer with  had weakened her lungs. She became ill on Tuesday, and she died on Sunday, January 12, 1964, under an oxygen tent. She never had the chance to see her dream become a reality.  But the bookmobile was doing a good  job, and its popularity and requests for books housed in the Hunkey building proved that there was a demand for a library in Muleshoe-apparently people who wanted books didn’t want to be forced to find them in Lubbock- so the next step was an actual library. By this time the city had accepted responsibility for the library rather than the county. A bond election was passed in 1968 to help fund the endeavor, and by 1971 Muleshoe was the proud home of the new Muleshoe Area Public Library, built at the corner of West 2nd Street and West Avenue D, where it remains today. And finally there was a real full-time librarian, Ann Camp, who served until  she  retired in 1996 and  Dyan Dunagan became librarian. 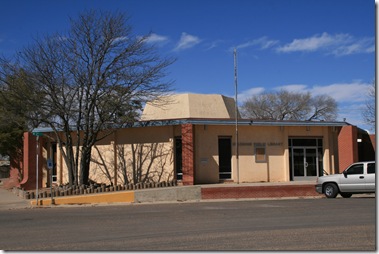 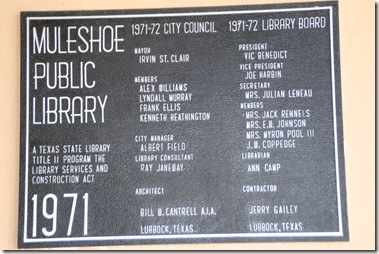 Today the Muleshoe Area Public Library boasts many popular programs to augment the books and periodicals that readers expect to use in a library. The Summer Reading Program for kids from the ages of two to 18 runs through June and July. Free computer classes are being held right now. In March the Social Security Administration will be on hand to answer SS questions. During Library Week in April the Library Family of the Year is announced, and the annual book sale is also held that week. Books, however, are on sale year-round. For seven months of the year, teens and pre-teens are invited to a movie night. 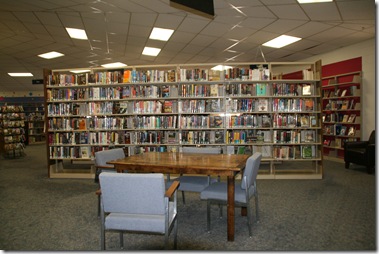 So even though Olabelle never had the opportunity to enjoy a library in Muleshoe, she helped make it a reality for those of us today who make use of its many resources. Thanks, Olabelle.

If you would like to read a more detailed account of the history of the  library, then trot yourself over to the library and  look for  Tales and Trails of Bailey County, the First 70 Years  in the reference section, and you can read Ann Camp’s article about how it all came about. You will also find lots of other neat stories about Muleshoe, and one about Olabelle, in that book.

One of the comfy and inviting reading areas in the library. 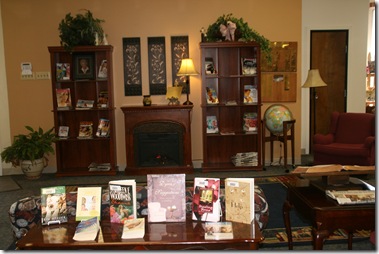 Shorty Flores checks out a book to Mateo Galindo. 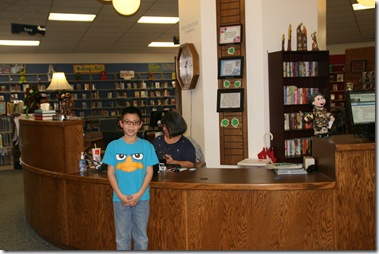 On a slightly different note, readers need to be aware that the library’s services, programs, and materials  are in danger of being lost as proposed state budget cuts will wipe out 99 percent of state funding on the local level. Things like the purchase of large print books, the inter-library loan service, loss of databases of research information, and a host of other valuable resources will be lost to these cuts. This might be a good time to let your state congressmen and senators know that library funding will be sorely missed in all libraries, but small town libraries in particular.

My thanks to Magann Rennels for all her help with this story and for sharing the first two photographs in the story with me.