Turkey Vultures are not Buzzards

Really. What we all probably grew up calling a buzzard is actually a turkey vulture, Cathartes aura. It just so happens a bird found across the ocean, Buteo buteo, is the real buzzard, found in Europe, Asia, eastern Russia, northwestern China, and northwestern Mongolia. The story goes that when immigrants first came to America and saw New World turkey vultures, they were reminded of their real buzzards back home, called these birds buzzards, and the name stuck. 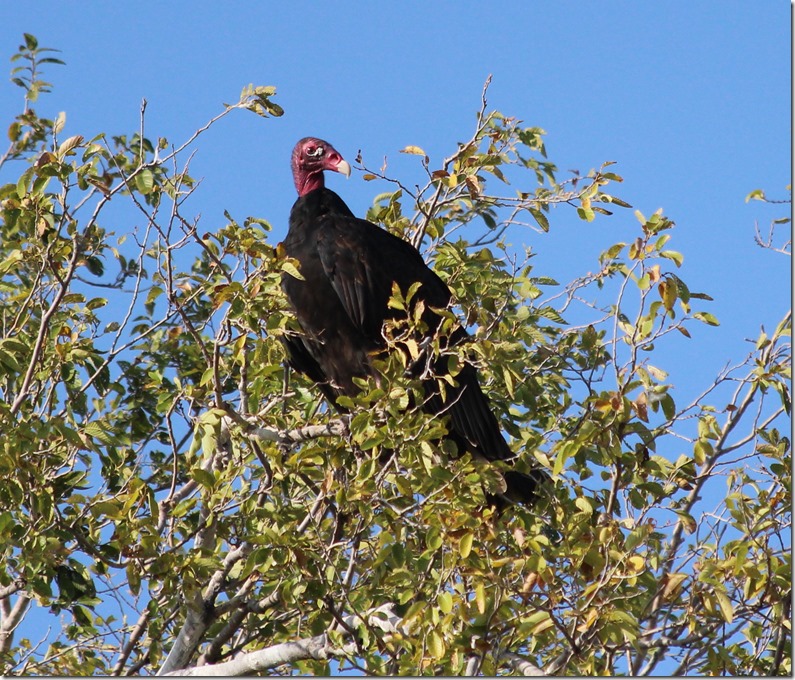 Turkey vultures are considered a raptor or bird of prey, but they are sort of in a class by themselves, according to some experts, because they feed on carrion, the bodies of dead animals, so they are really more of a scavenger. Discussion continues on how exactly they should be classified, but that is another story. They can be distinguished from other birds of prey by their bald red heads, since hawks, eagles, and true buzzards have feathers on their heads. This lack of feathers keeps their heads clean and free of bacteria  when they are consuming the carcasses  because they must use their beaks to pull out the dead flesh. That is because their feet are like chicken feet, not like a raptor’s foot with strong talons to grasp what they eat, so turkey vultures rely on their large beak to tear off bites of meat and use their chicken-like feet to walk on the ground and hold the dead body in place while they eat. You might also notice their enlarged nasal openings by the beak, which contributes to their keen sense of smell to find that carrion. 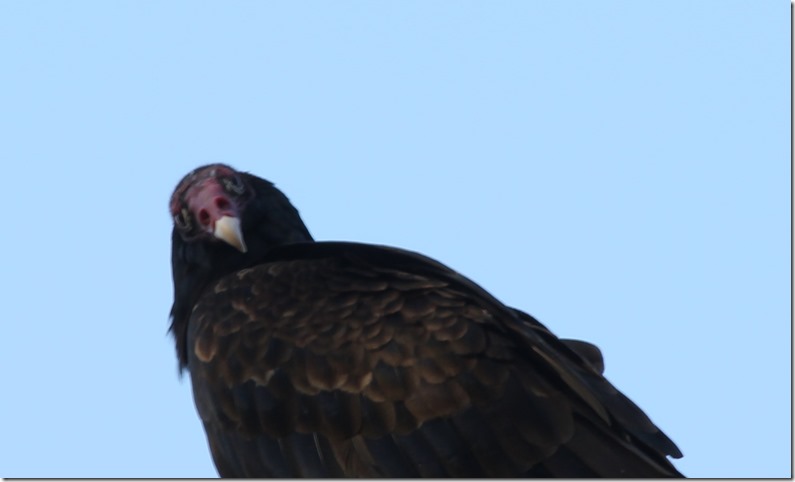 Turkey vultures stand about two and half feet tall with a six-foot wing span, and at maturity weight around five pounds. Close up they are brownish black, and from a distance in the air they look black. If you can catch them in flight in the right light, however, you can see the slivery underside of their wing feathers. 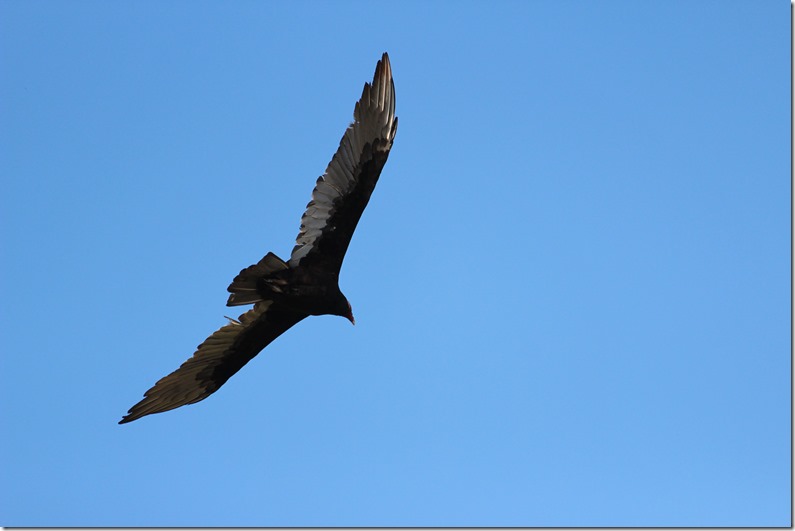 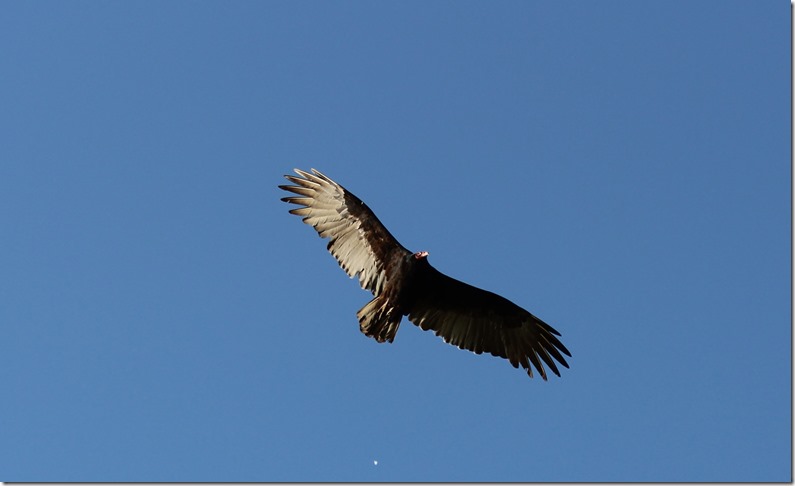 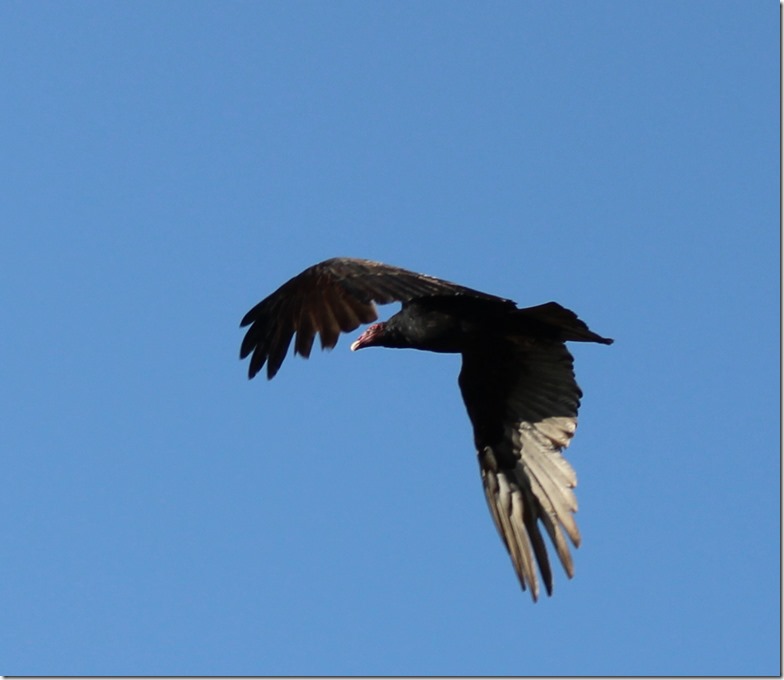 Every year about this time we see the vultures begin to roost in the dead elm trees over at the golf course. This year is no different; they are always around, but they do gather up and migrate in the fall. So I got up early one morning a couple of weeks ago and the dogs and I went over in the golf cart to take some pictures of them. As luck would have it, the morning I choose was foggy when I started out, so my first attempts are gray because of the fog. Later it lifted, and I had blue sky for a nice background. But as I made my way down the first fairway, they were not in the dead tree where they usually roost. I drove down the number two fairway, cut through to five, I think it was, and turned headed back to the clubhouse when I looked over at the live trees by the street, and there they were! 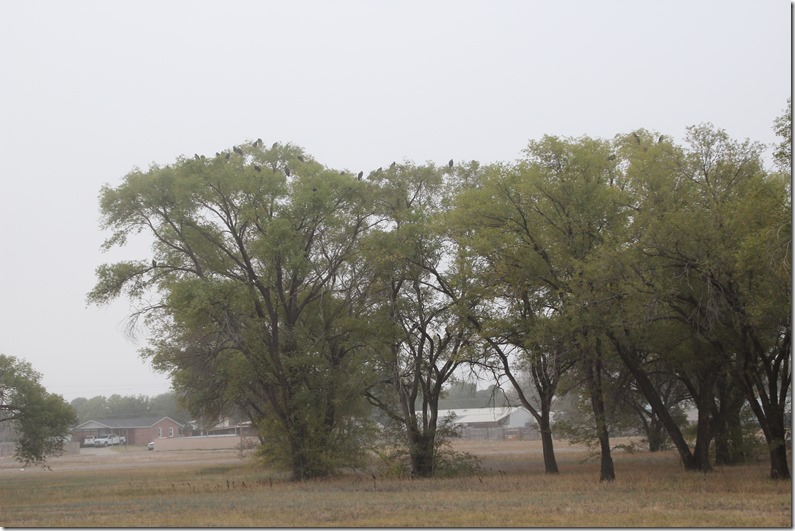 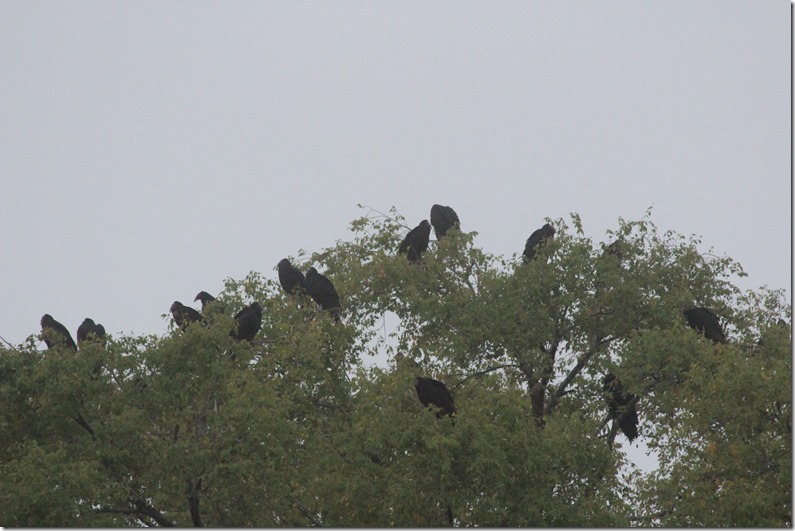 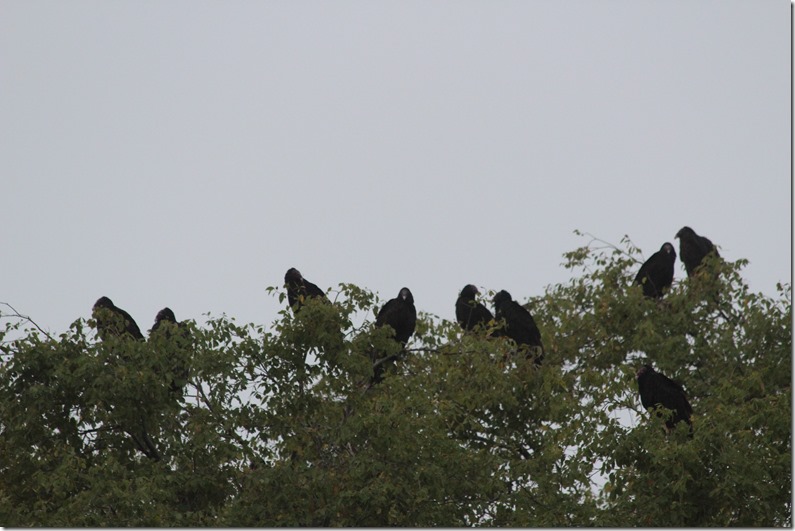 They shifted around in the tree top while I watched and shot picture after picture. In fact, after I loaded the images in the computer, I counted 345 images! They were fascinating to watch, and I just kept taking shot after shot in hopes of getting just the right, great one. I think I managed to get some pretty darn good ones, if I say so myself. And they got better after the fog lifted. 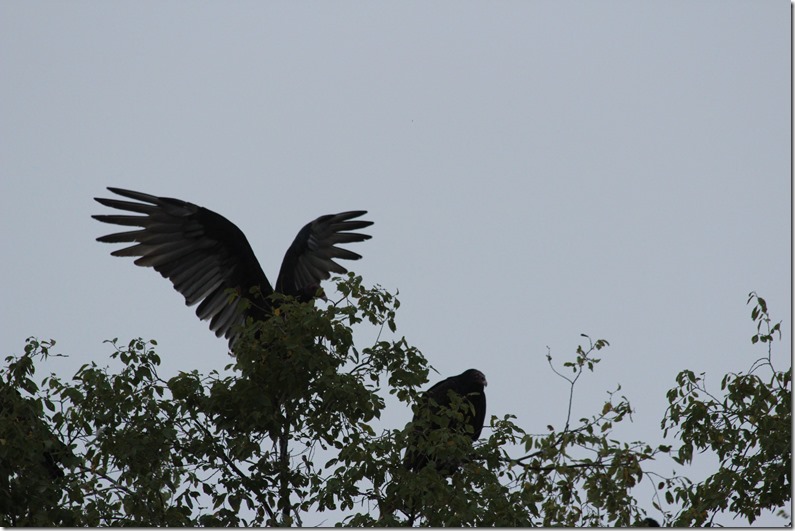 Eventually Porche couldn’t stand it, and she barked enough to send them into the air. The birds are not circling in this picture, but their circling patterns when feeding did actually aid NASA and the FBI in recovering astronaut remains after the Columbia disaster. The authorities saw them in suspected areas, watched their circling and spiraling downward patterns, plotted that with their GPS, and recovery teams were then successful in the designated sites. That may sound gruesome, but the vultures provided another service useful to man without knowing it. 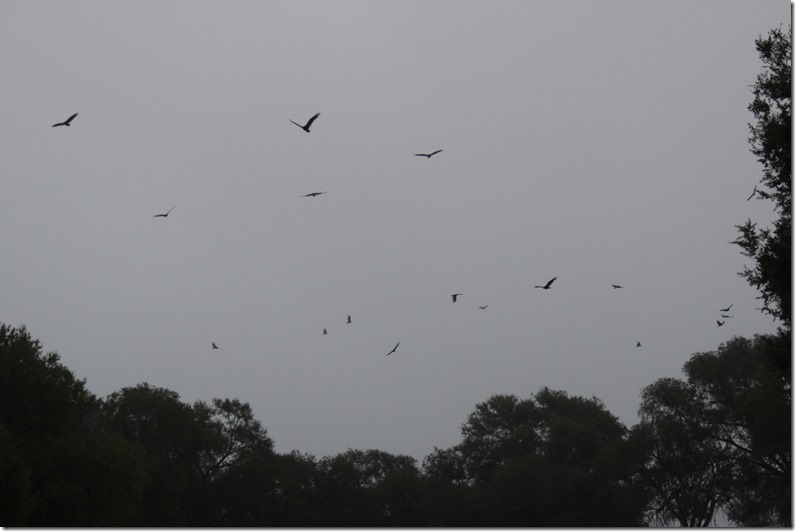 They flew around; we followed in the cart, and they flew to the dead tree on the number one fairway where I expected them to be originally. 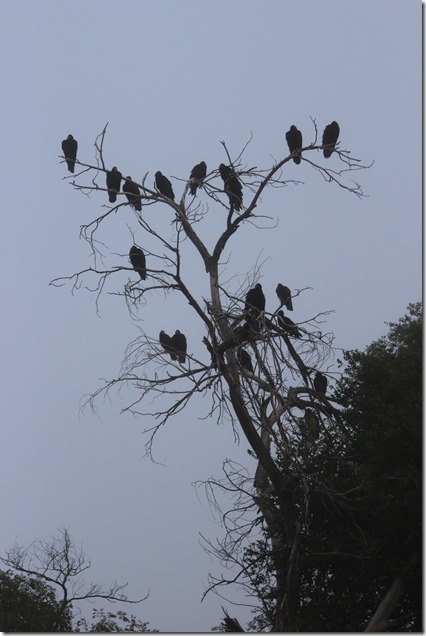 And once again, Porche barked, which helped me get more dramatic pictures. I should have taken her picture while barking, but she had me so focused on the birds, I forgot to give her photo credit. But I don’t think she cares. 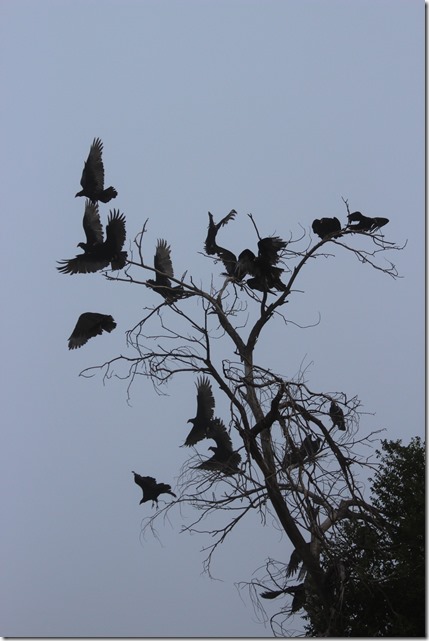 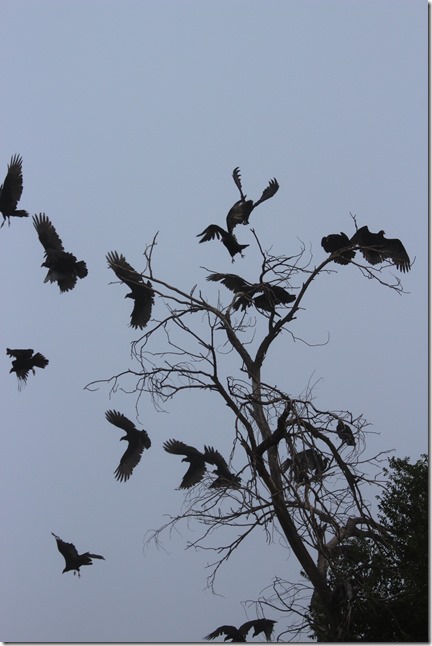 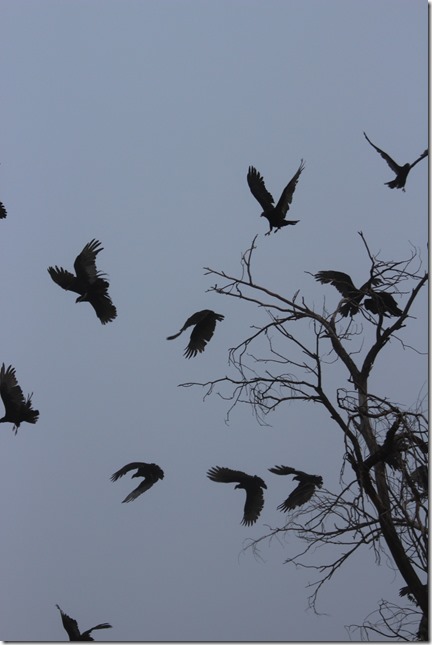 One habit of the vultures is to sit holding their wings out like this to dry their feathers. This bird may be about to take off in flight, but the pose is similar to this, and if you look in some of the other pictures, you can see one or two holding their wings out to dry.  Drying their wings warms them up, as early morning dew can be cool; I know it was this particular morning. This pose also bakes off bacteria they may have picked up from their meal of carrion. We know that turkey vultures clean up road kill for us, but out in the pasture they also clean up carcasses of livestock or wildlife that may have died from disease. This keeps other animals from coming along and being exposed to and spreading that disease. I read that infected meat deadly enough to kill a coyote doesn’t hurt a vulture because the composition of their digestive tracts kills bacteria and pathogens that wreak havoc on other animals. They also use those digestive tract juices to ward off animals who threaten them by vomiting on them when approached.  And then they have the unpleasant habit of defecating and urinating on their feet so their highly concentrated uric acid also kills bacteria and parasites that might be on their feet from a previous meal. It also helps cool the bird in very hot weather, so focus on that instead of the unpleasant part! 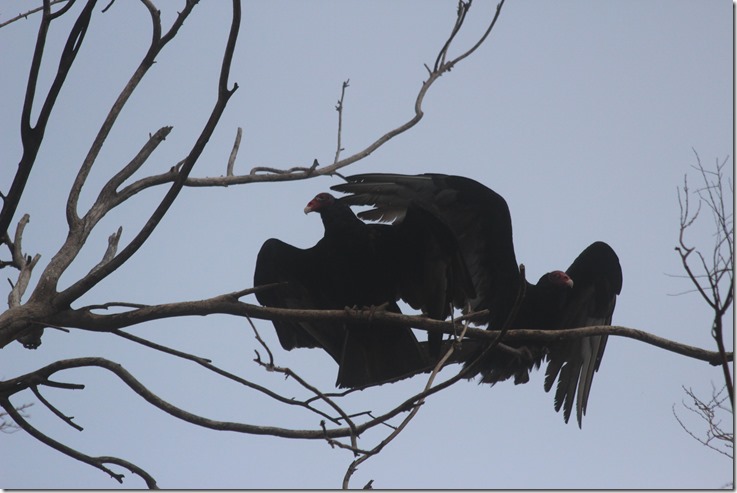 Turkey vultures dine mostly on carcasses, but they will also eat reptiles, other birds, amphibians, and fish found in receding waters. All sources I read stated that turkey vultures do not kill their meal; they eat dead bodies or animals that are on their death bed from other means, such as animals killed and left by black vultures, who do kill live animals. Then when the turkey vulture is seen eating at the dead body, they get blamed for the kill. Not so. They clean up after the black vulture.

But back to my adventure with the birds. We roused them enough that they circled around and alighted in a different dead tree. I asked Jude Smith from the Muleshoe National Wildlife Refuge why they seem to prefer dead trees, abandoned fences and highline wires, even though I watched them land in the live trees at the golf course. He said being the big birds they are, it is probably easier to land on the bare branches. I like it when they perch in the dead trees; it makes for a more interesting, albeit eerie, scene. 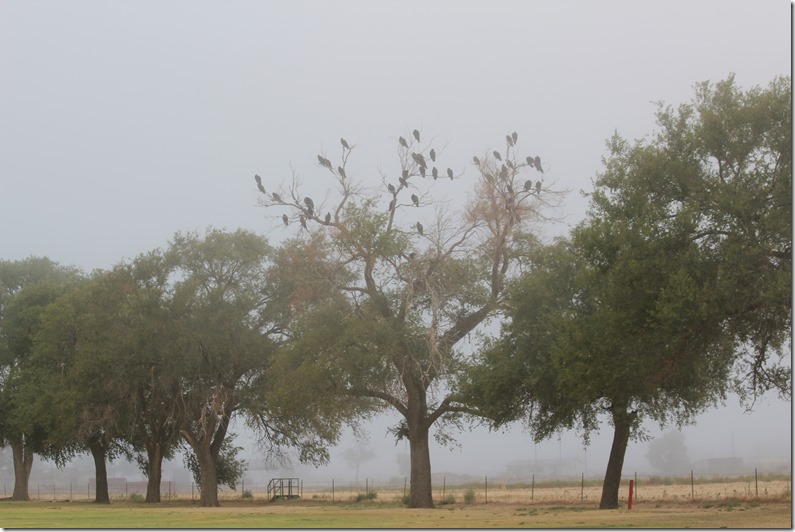 Once again, Porche charged the tree, and they took off. 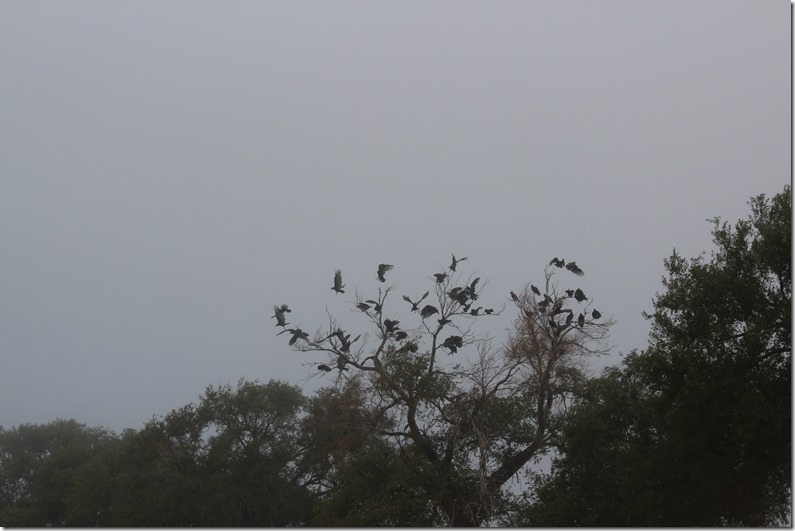 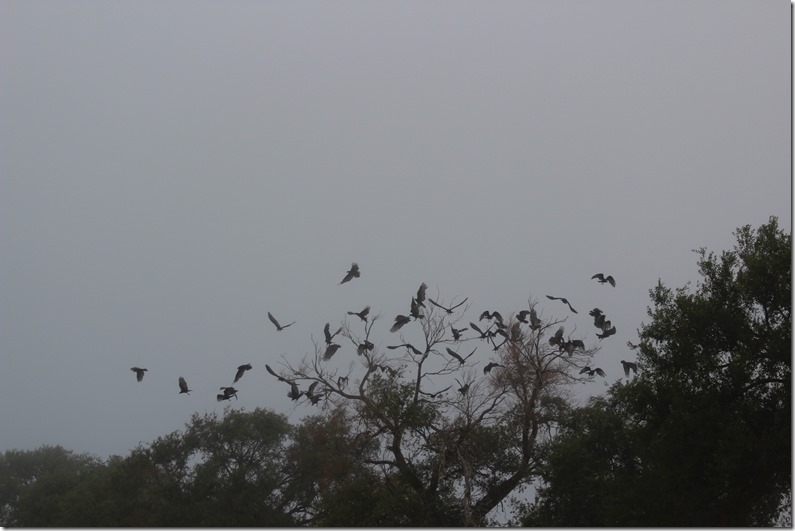 Turkey vultures have no voice box, so they are generally silent, sometimes grunting or hissing. That’s why they are not known as a song bird or have any recognizable bird calls.

Later I caught these two just sitting. Then they decided to fly off. 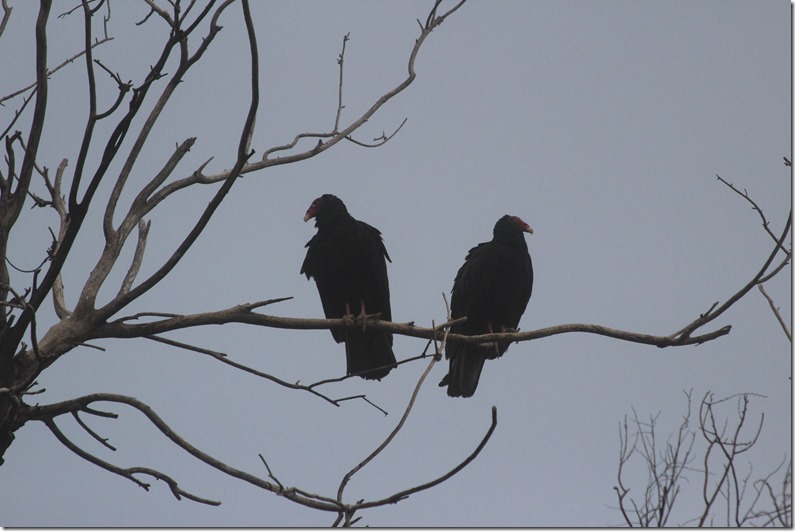 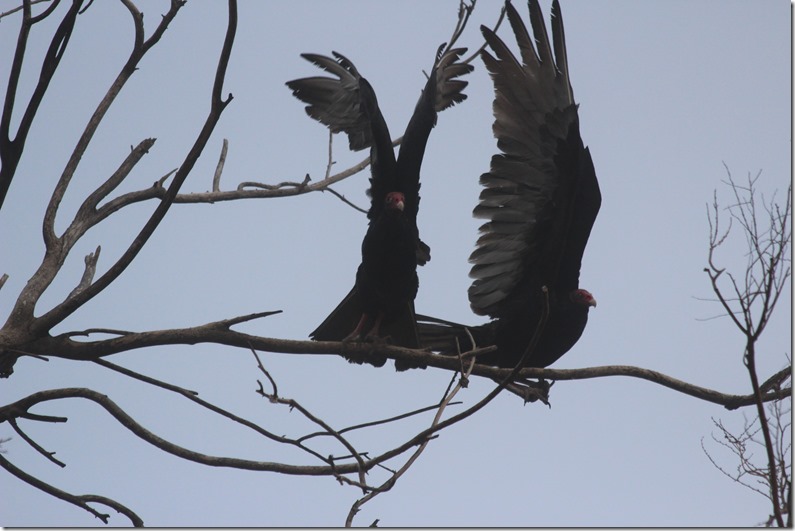 As the fog lifted and the sky brightened up, I was able to get better images of the vultures. 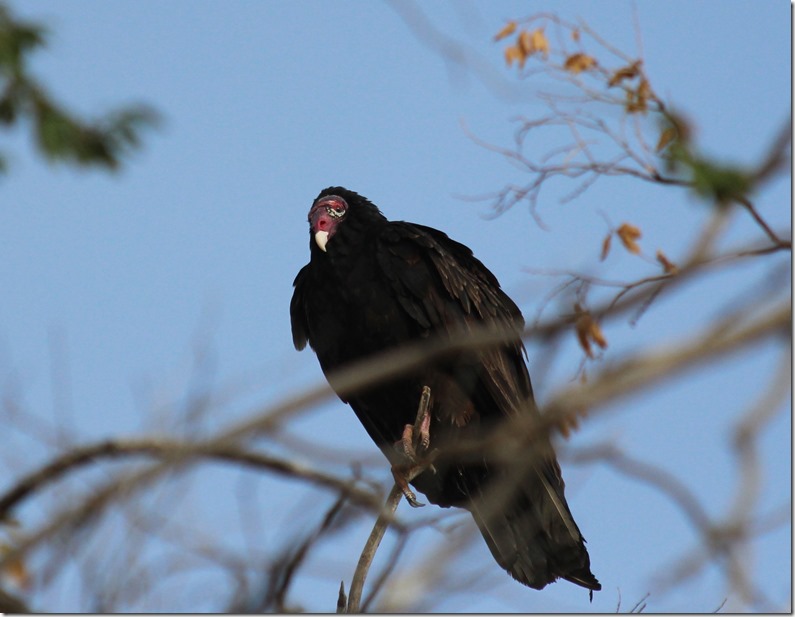 The males and females are indistinguishable from each other, although the female might be slightly smaller. They tend to mate for life and can live for up to twenty years.  They do not build a nest, but lay their two eggs in hollow logs, crevices, abandoned buildings, and caves.

As the sun came out and warmed things up, they started striking the pose, drying and fluffing their wings. 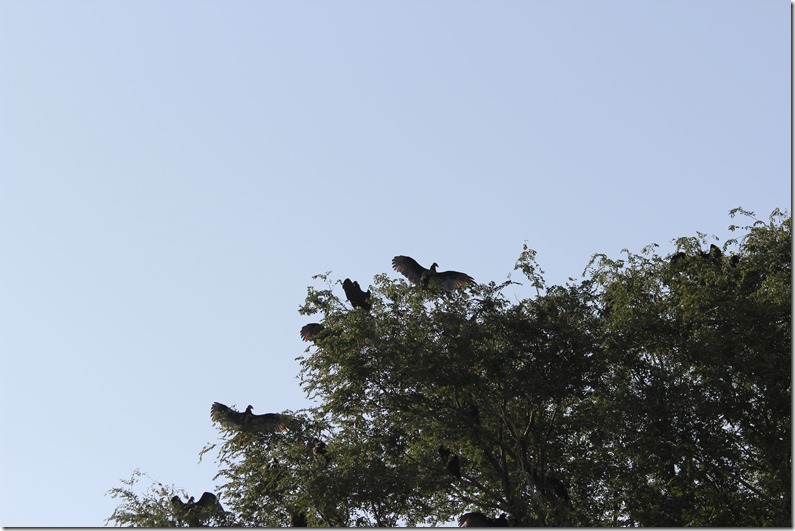 Park Ranger Smith said in recent years the turkey vulture populations have been in decline, perhaps from flying into guide wires, wind turbines, radio towers, and perhaps when they migrate to Mexico being exposed to poisons or herbicides not used in the U.S. He said the Old World vultures’ numbers are also in decline, so maybe this will spark more study into what is happening to these beneficial birds.

Smith also said that turkey vultures are protected under the Migratory Bird Treaty Act. It is illegal to shoot them or capture them, and hefty fines are assessed if the birds are harmed.  He also said that yes, sometimes large numbers of them can create problems, but there are humane ways of dealing with that, and to contact him for help in taking care of things.

Large numbers of turkey vultures really like our golf course, but they do no harm over there, so please leave them alone and just enjoy the show. These complex birds really only have one natural predator, and that would be us. I suspect we give little thought to the good they do in cleaning up after our messes; there is more to them than we give them credit for.

And I will leave you with a few more of those 345 pictures I took. I’m having a hard time choosing which ones to share with you, so you can pick the ones you like. I like them all! I really enjoyed chasing them all over the golf course and watching their flight.

But the last picture is a beauty. I hope you take the time to go to the very end. 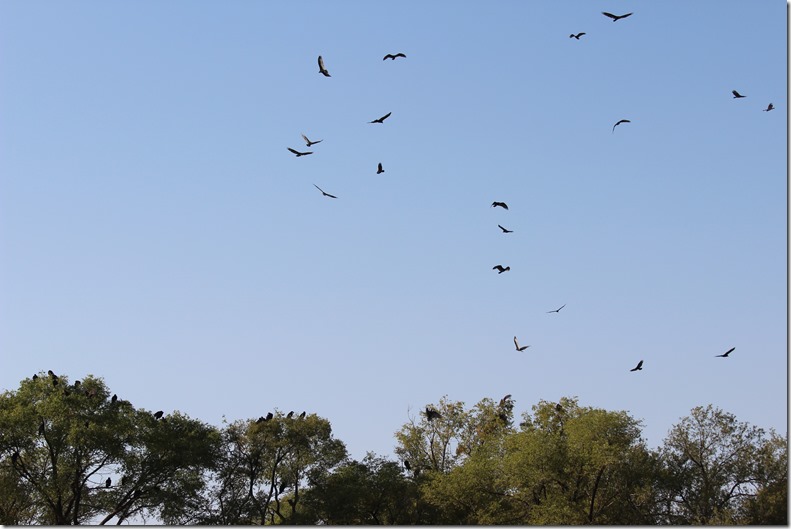 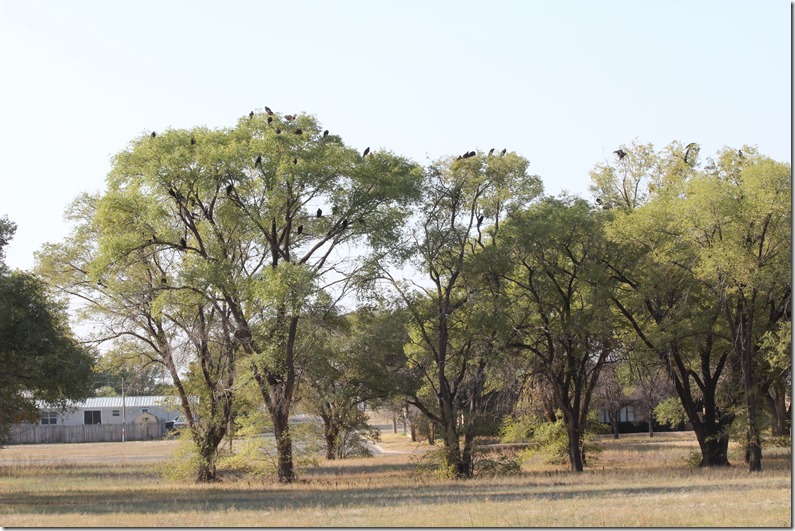 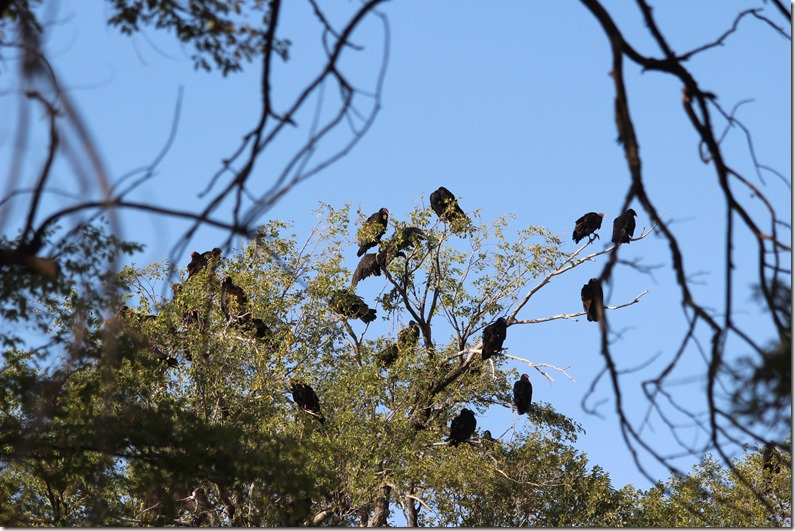 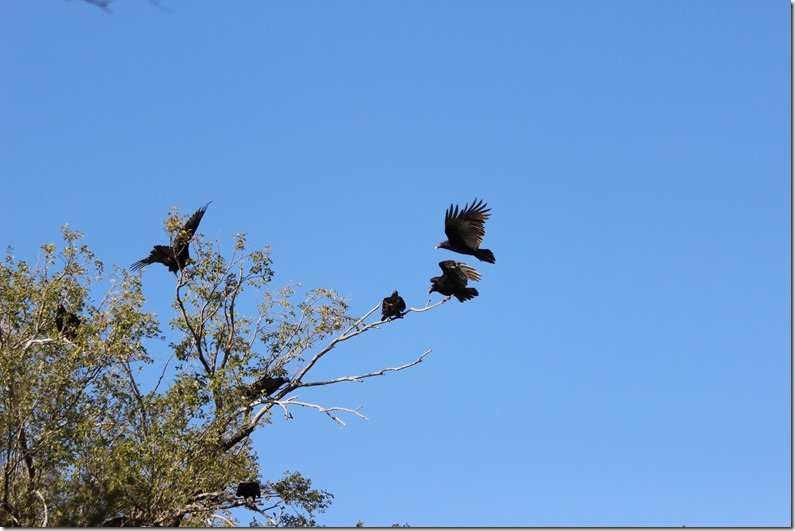 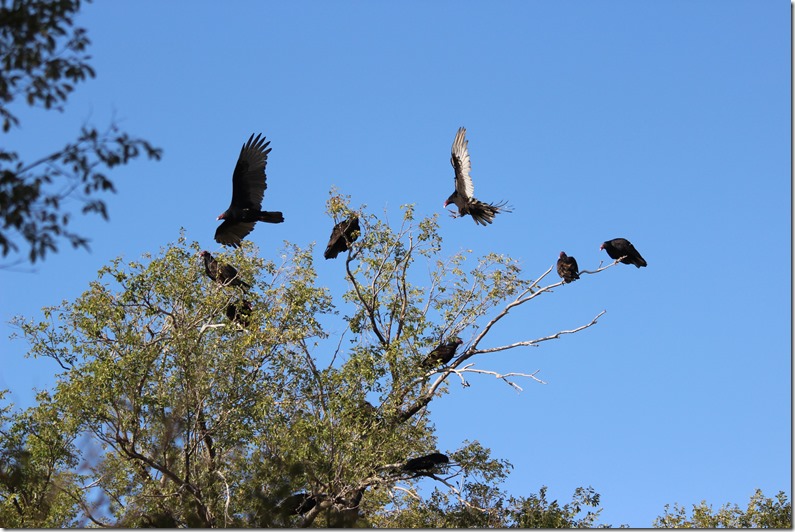 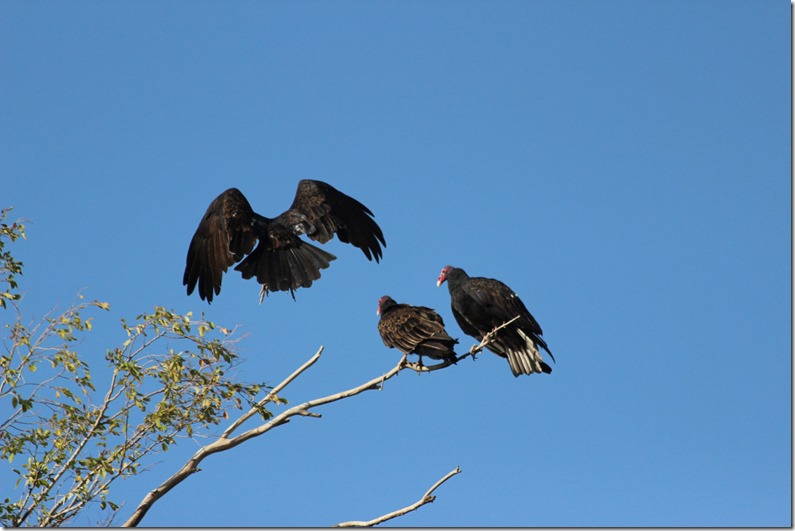 And here it is-the one I took all those pictures to get. 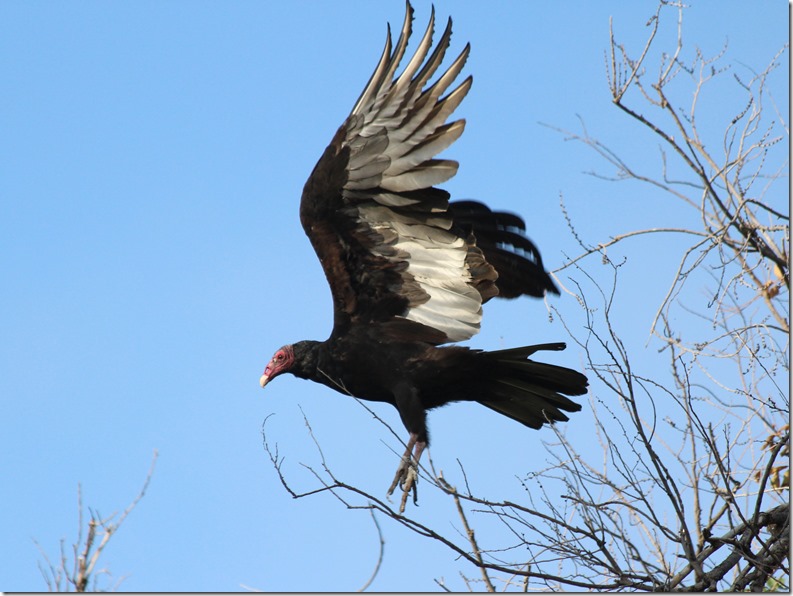 All God’s creatures have their place in this world. Turkey vultures do, too.

Thanks to Jude Smith at the Muleshoe National Wildlife Refuge for his help with this story, and Porche Dog for barking and making the birds fly.