Most mornings we take the dogs for a walk around the golf course. It’s handy, what with us living across the street from it, and early in the morning no golfers are playing so we pretty much have the place to ourselves. Well, except for Derrel and Nick who are always busy doing what needs to be done to keep the course neat and tidy and ready for use by golfers later in the day. 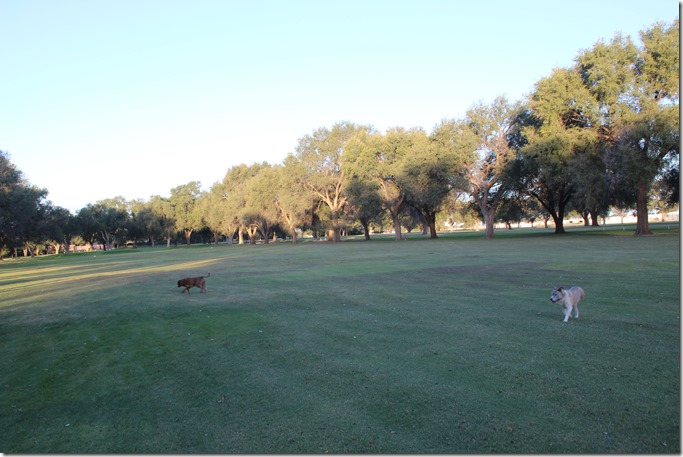 It was on one of those morning outings I got to wondering about the history of the golf course and who saw fit to plant all those trees, the trees being one of the main markers of distinction for this golf course plopped down in the middle of flat, dry West Texas. At least for me, being a non-golfer, the trees are what I enjoy on the walks. Yes, the course is in excellent shape, lush and green, even as winter sets in, but it is the trees that give it its character.

So I decided I would just find out the early history of the course, when all those trees were planted, and who was involved and add that story to Muleshoe’s history. Questions were asked; documents were read; trips were made; I even consulted the Tails and Trails of Bailey County history book I wrote about in an earlier blog, which had no mention at all of the golf course, so naturally I saw a hole where information needed to be added.

I started all this probably two months ago. Maybe more. And I have been putting off writing the story because what I discovered is that writing a real history of the golf course is an exercise in futility. I didn’t really have time to do extensive research on the kinds of information I might have found at City Hall or the courthouse because answers to most of my questions wouldn’t have been on record anyway. It would have been like looking for the never-found golf  ball in the rough. I wanted to hear from all the movers and shakers who worked to make the golf course a reality and who loved to play on it, and they are gone. The few who are left candidly admitted they couldn’t remember much about the early developments and some of the dates and other things I wanted to know, but they could remember with a laugh some of their good times and experiences on the course that perhaps should be left as fond memories. And that’s okay. I will share with you what I was able to piece together and which you may correct me on if you know I got something wrong. I will also share with you what it takes to keep the course pretty and green and playable like it is today. So here goes.

I was told by several older members that the course originally had sand greens and the fairways were basically native pasture and lots of dirt. By 1955-56 grass was planted on the greens. Through the 60s and 70s the fairways had been watered from wells which also watered the greens,  but improvements in the condition of the fairways in particular might have come in 1981 when Jeff Smith thought up using city sewer water for irrigation and with the help of city manager Dave Marr saw to it that the water was piped over to the golf course. Later the city dug the pond for holding the water. I was told that Houston Hart provided the pipe for the water lines from Hart Lumber Yard and also devised a way to fertilize. Members saw to it that the irrigation ditches were dug and members laid the pipeline, or at least part of it. 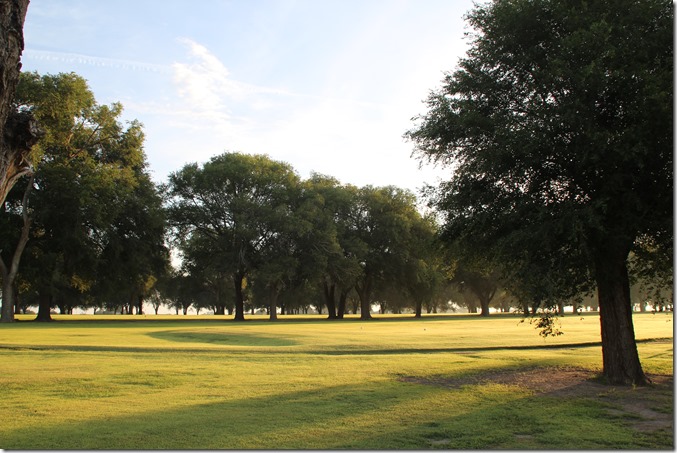 Based on other comments, I think the trees were most likely planted in the early 60s, but I never was able to pinpoint which members should get the credit for doing that. Some have been lost over time, but about 550 elm trees line the fairways and cart paths. The pro shop and the first hole’s tee box were originally located where the men’s 8th hole tee box  now sits.The club house came later, burned down around 1965, and was rebuilt by E.T. Ford. The cart sheds didn’t burn down and are the oldest buildings on the place. 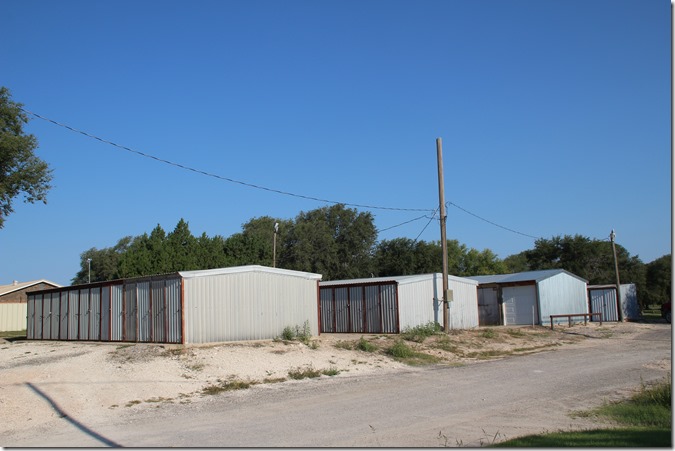 Through all this fragmented research, one thing became abundantly clear. The development and growth of this golf course was truly a labor of love tended to by members who were dedicated to seeing the job done. The same names kept being mentioned: the St. Clair brothers Bill Jim and Irvin, who started the Mule Race for couples; Houston and Ruby Hart; Clyde and Mary Frances Holt; Stan Barrett; Bill Brown; Sam Damron; Demp and Neets Foster; Larry Hall; Robert Hooten; M.D. Gunstream; Claude and Evelyn Riley; Don Bryant; Mac McVicker; Wiley Mudget, who came up with the Mule Skinner tournament; B.Z. Beaty; Dee Brown, Joe Sowder; Woodie and Mildred Lambert; L.S. and Dorothy Barron. No doubt there are other names that should be mentioned, but this is what I came up with. Feel free to let me know what names need to be added. I can assure you, however, that these people and those I might have unwittingly left off, are the people responsible for Muleshoe having a nice nine-hole golf course and one that is still going strong.

After dealing with my frustrating history lesson, I found it much easier to learn about the upkeep of the course from Derrel Embry who has been the grounds-crew superintendent for the past three years. The work day for Derrel and his assistant Nick Williams begins at daybreak and follows a consistent schedule to keep things clean, green, and mowed. 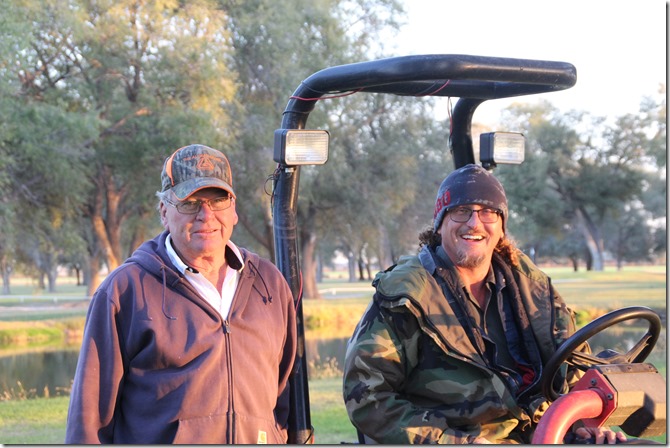 First they mow all the greens and then water them. During the summer they mow the fairways once a week; as winter comes the fairways go dormant and don’t have to be mowed for the most part. But the bentgrass on the greens doesn’t go dead in winter and still has to be mowed. The greens are airified and sanded twice a year in February and September to keep the grass healthy and thick. Once a month they fertilize by spraying the grass with water and then applying dry fertilizer, and fungicide is also applied on the greens once a month. This is called top-dressing the greens. The greens get better as the years go by due to this sanding and top-dressing because it adds good things to Muleshoe’s original poor dirt. The fairways are sprayed for weeds as needed and fertilized once a year in February. That fertilizer and the upkeep of the machinery and equipment like this greens mower are the course’s biggest expenses because of their constant use. 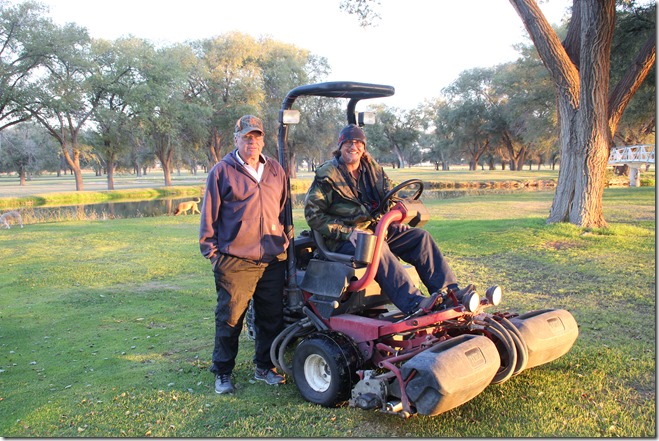 I asked Derrel what gives them the most trouble keeping the grass in shape, and he quickly said the cutworms that cause holes in the surface of the greens. He said skunks are also a problem when they make holes looking for grub worms on the fairways. Deer have recently found their way to the course, but Derrel said they don’t tear up much and seem to just be looking for water.

Nick and Derrel spend lots of time picking up the litter of branches and twigs that consistently blow out of all those trees, but they also have a lot of good help from members who come after wind storms to help pick up the trash and who also show up to help with the sanding of the greens. 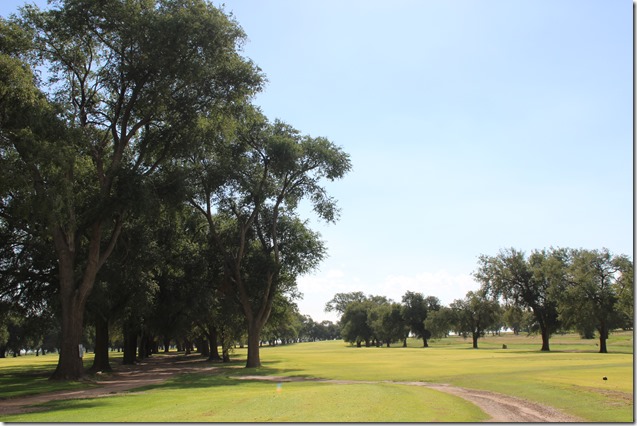 Derrel said the use of the city’s effluent water begun in the 80s has helped keep the course open. Lack of water at other small town courses has been their downfall and has led to the closing of many of them. After all, that green grass has to have water. He said the course has had as many as three wells, but now uses one well and the city water which is piped to the holding tank behind the driving range from a facility south of town. 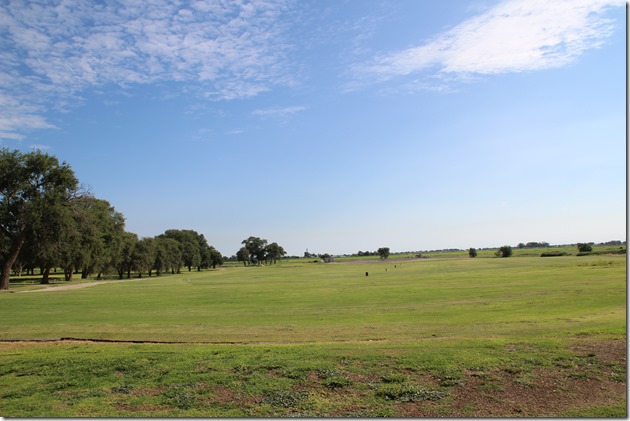 I asked about water and sand hazards, which have come and gone at times. The sand, Derrel told me, predictably blows away. Water hazards are costly and hard to maintain, so they are gone. What they do have now as a hazard is grass bunkers with grass about three inches long. All those trees that line the fairways look beautiful but create their own brand of difficulty to the course. Derrel said many of the golfers would love to see some of them come down! People assume that Muleshoe is flat and will therefore have an easy course. The trees keep that from happening,  so it is an unexpected challenge.

The cups that you want your ball to roll right into, also called the pin placements, are changed once a week, as are the tee boxes so that the players have some variety of difficulty and don’t get bored playing the same patterns all the time. 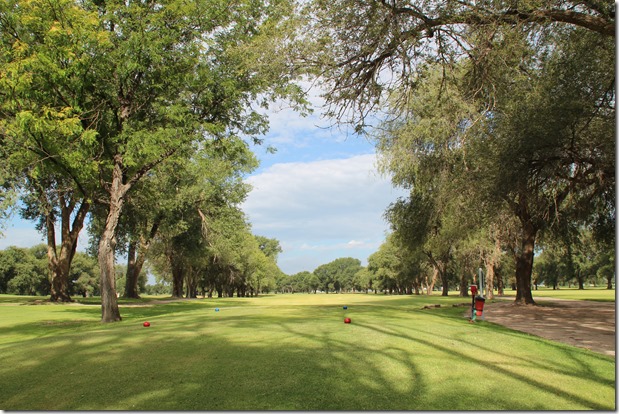 We talked a little about other things a good golf course should have to attract golfers, and greens fees came up. Derrel said Muleshoe’s fees are very reasonable; after all, you don’t want to price yourself out of the market. This is a municipal course, so anyone can play.  Men golfers enjoy the Muleskinner tournament every year, and the Muleshoe Ladies Golf Association is active for women’s golfers who are interested, and they participate in the High Plains Golf Association as well. Small clubs have a hard time keeping a golf pro, and Muleshoe doesn’t have one, either, but they do run a pro shop, rent carts, have a bar and restaurant, and a swimming pool is available in the summers. 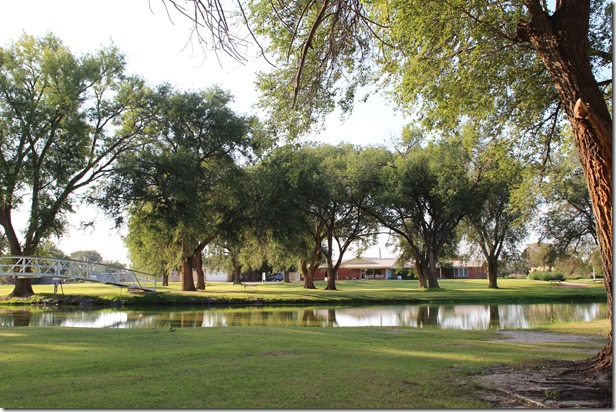 Well-groomed greens and fairways, reasonable greens fees, carts to rent, food and drink, trees to look pretty, give shade, and challenge your game. The Texas Junior PGA thought the course was good enough for their tournament here last summer. The Muleshoe High School golf teams practice here every year. Golfers from an exclusive Midland country club said this was one of the best small town courses they have played. Pretty good recommendations, I must say. 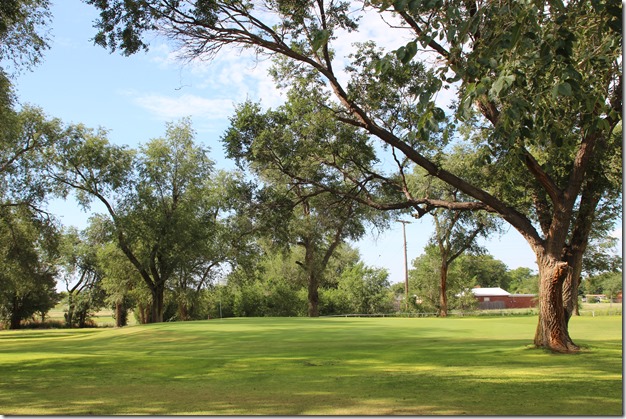 Come see for yourself one of these sunny days.

My thanks to Derrel Embry, Sam Damron, Laverne Winn, Claude Riley, Mike Riley, Bill Liles, LeeAnn Gallman, David Brunson, for their help with the article. And thanks to those of you now and in the future who contributed additions, remarks, and your own stories to the story of the golf course.