May This Keep You Safe from Harm

While visiting with Betty Jennings for the story “G.O. Jennings had a Grocery Store,” February 20, 2021, she shared with me a story about a New Testament Bible given to her husband Jim Jennings when he entered  military service in 1942. I was unaware of this practice, so I did some investigating. This is what I learned.

When I started my research, I wondered if Bibles for American soldiers was something begun by American presidents since Presidents Woodrow Wilson, FDR, and Teddy Roosevelt’s names came up in the information I found. Turns out this practice dates all the way back to the last years of the American Revolution and then later into the American Civil War, thanks to the efforts of the American Bible Society, established in 1816 by a group of prominent American Protestants headquartered in lower Manhattan in New York City, but now based in Philadelphia, Pennsylvania.  During the Civil War, the Society tried to provide copies for both Union and Confederate soldiers, but often times books shipped to the South were intercepted and stopped, suspected of being Union contraband.

These presidents, and later other American presidents, I’m sure, wrote inscriptions that were printed in the copies given to the soldiers. Many of the Bibles used in WW II had front covers made of brass plates and were the right size to fit in the chest pocket of the soldiers’ uniforms as possible protection for their heart from bullets that might be encountered during battle. The early versions of this Bible used during the Civil War, and I am not sure if they had the brass cover or something else,  might have been able to deflect a bullet from a musket, but by WW II that would have been less likely, although they were reported to have worked in some cases with bullets shot at an angle, for example, or repelling shrapnel. But I suspect their greatest contribution was to provide comfort and reassurance and to confirm their faith in God as they were read by soldiers who had to experience the tragedy and horror of war. Catholic versions as well as Jewish scriptures, and later, other religious texts, were available as well.

These Bibles came to be known as Heart-Shield Bibles and usually had one of three different inscriptions engraved on the brass cover: “God’s Weapon,” May the Lord be with you,” and  “May this keep you safe from harm.”  I discovered that these Bibles can also be bought by the family or friends of a loved one serving in the military and sent to the soldier to be carried in combat.

Nothing about the Bibles and their use in wars and conflicts after WW II came up in my research, so I made some inquiries to see if they were still issued to soldiers today. Several Vietnam vets said they didn’t remember receiving one, and some of you veterans may correct me on this, but I suspect that after WW II the Bibles were not always part of the government issued equipment given to soldiers when they enlisted or were deployed to combat zones. I was told  by Cannon Air Force Base that soldiers who request one are given a Bible, but because of varying religious preferences, Bibles aren’t automatically issued to soldiers.

But the fact that they were given at all was something I didn’t know, so Jim’s Bible was an interesting story to me, and I thought I would share it with you.

Jim Jennings had just graduated from Muleshoe High School in 1942 soon after America had entered the war after the bombing of Pearl Harbor. He and several classmates enlisted in the Army Air Corps, and he trained to become a gunner on a B-24. After training was complete, he was stationed in England and made several bombing runs across Europe. His government issue brass-bound New Testament went with him in on these runs, tucked into his shirt pocket next to his heart.

One of those runs was to a destination in Germany where his crew faced heavy artillery fire from anti-aircraft guns. The attack damaged the plane, creating flak that landed in the plane.  In this war, crew members had to wear special suits with heating elements over their uniforms to protect them from frigid temperatures that are a danger in high altitude flights. During the battle  the heating elements in Jim’s gloves were destroyed and his hands suffered severe frostbite.

The plane was able to return and land safely at the base where Jim’s frostbitten hands were treated, but failed to respond. After many days, one doctor felt like his hands would have to be amputated, but a second doctor suggested waiting one more day in hopes of improvement. That following day produced a miracle as his hands did show some circulation. The surgery was postponed, and Jim regained almost normal  use of both hands. The main lasting side effect was increased sensitivity to handling anything cold.

That Bible in his pocket, and which stayed with him during his stay in the hospital, may or may not have been his guardian angel that helped with the frostbite, but it definitely protected him from the flying debris when the airplane was hit. Flak had dented the cover and caused a green discoloration of the metal. In Betty’s words, “The prayer engraving, ‘May this keep you safe from harm,’ was not only a prayer of hope and one of blessing, but one of fulfillment through trust and faith in a Heavenly Father Who was watching over him.” 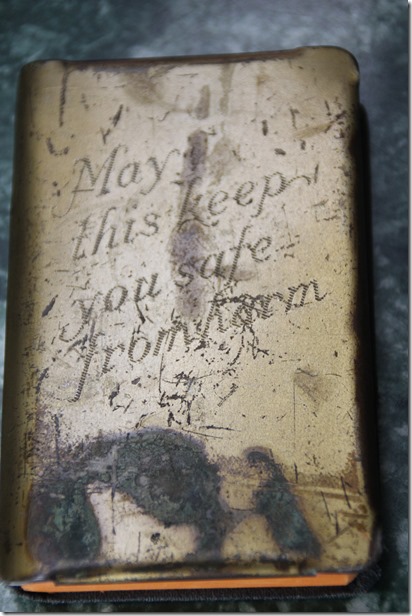 Betty no longer drives, but the Bible is safe and secure in her home in Lubbock, always there to keep her safe from harm.

And as Paul Harvey used to say, “Now you know the rest  of the story.”

Thank you, Betty Jennings,  for sharing this story with me.