The Muleshoe and surrounding Bailey County community gathered Sunday afternoon,  February 7th, to pay homage to the  service of LCpl Chad E. Bales with the dedication of a flag pole in his honor and memory. 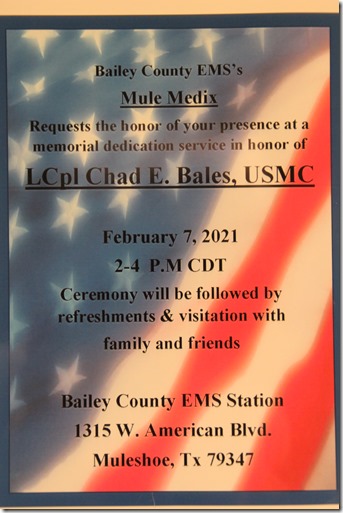 The son of Kem and Lori Bales, and a former junior English student of mine,  Chad enlisted in the Marine Corps in 2001 after graduating from Coahoma, Texas, High School that same year. In 2003 Chad was deployed in support of Iraqi Freedom, and while in Iraq lost is life serving his country. He was twenty years old. 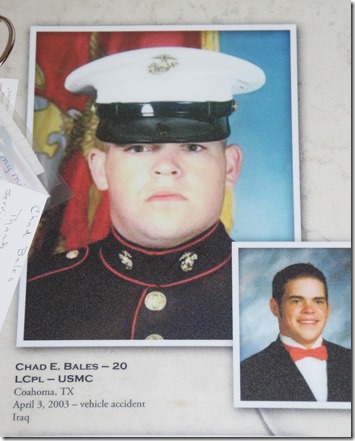 The Bailey County EMS had been wanting to fly the colors round the clock at the EMS Station since they moved to the new location in 2019. Discussion started, one thing led to another, and Kem Bales, who has served as a certified paramedic with the EMS for several years,  came up with the idea to erect a flag pole with a plaque in honor of his fallen son. He posted the idea on Facebook on Memorial Day of 2020, and apparently the idea touched many people. Donations started coming in.

Everyone at the station started looking for where that flag pole should be placed. First they considered the east corner of their location on American Boulevard, and then the west end of the parking lot was also as option.  As Kem looked at that corner, with its desert willow trees and the less busy, and therefore quieter, open area, somehow he just knew that was a better place for it. At this point, the Mule Medix, a newly named nonprofit 501c3 component which grew out of the Bailey County EMS Organization, stepped in to make the memorial a reality.  The history of the Mule Medix organization will have its own story, but here’s how the flag pole came to be.

The memorial continued to develop a life of its own. Donations poured in from people in Muleshoe, Bailey County, and suddenly money unexpectedly appeared from all over Texas and the United States; a fire station in New York even sent a donation. It was amazing.

I spoke with Jene Wilton, paramedic with the EMS, and Laramie Fulcher, AEMT with the EMS and president of Mule Medix, who said the arrival of the coronavirus and the logistics of flag pole protocol slowed things down a bit. There was also the issue of the light pole that had to be removed from the spot where the flag pole, ordered from Oklahoma City and shipped from Virginia,  would go. Local contractors helped dig up the old pole and pour the cement for the area, another local business took care of installation and supplies for the electrical work, and a local business donated the West Virginia granite for the bench. Another area business engraved the bench as their contribution to the project. The flag itself was even donated by an individual. Manhours, supplies, landscaping materials, planning hours, everything but the flag pole itself were made possible because of those donations. The Mule Medix gave of their resources, time and manpower as well to get things done.

You’ll notice the word “donate” coming up over and over.  That’s what Jene and Laramie said was so amazing and gratifying about this whole project, how the community and beyond came together and responded to it. The list of donors has become so long that, fearful of leaving someone off, no names were used in this story, but no contribution has been forgotten, and all, no matter how large or small, were greatly appreciated.

I mentioned flag protocol. I knew that for a flag to fly at night, it had to be illuminated from both sides in the dark, so electrical wiring and floodlights were installed. I didn’t know that the size of the flag had to agree with the size of the pole, so that had to be considered as well.

The bench, landscaping and rock water feature were added because everyone involved wanted this little sitting area to not only be a way to honor a fallen soldier-and collectively, all fallen soldiers- but also be a place for resting and reflection for workers after a hard day or a difficult call. 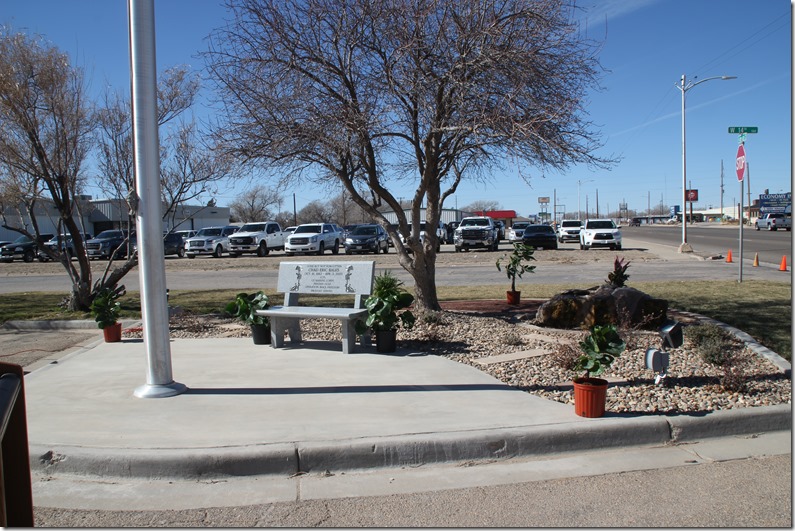 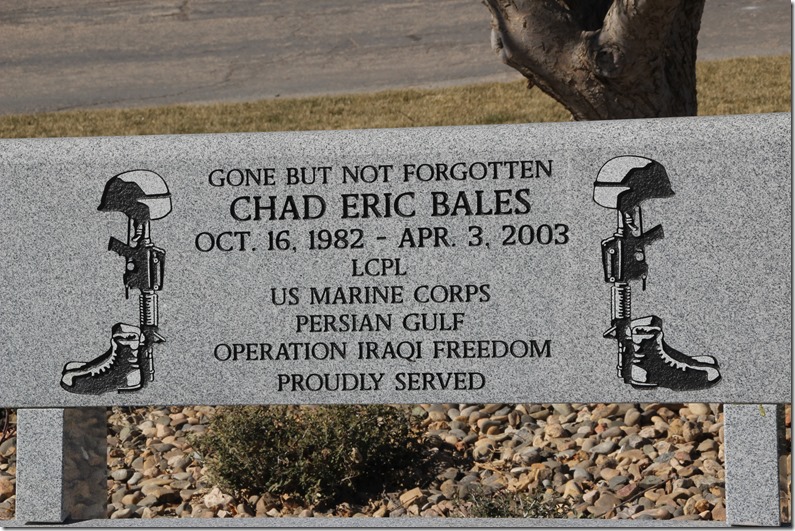 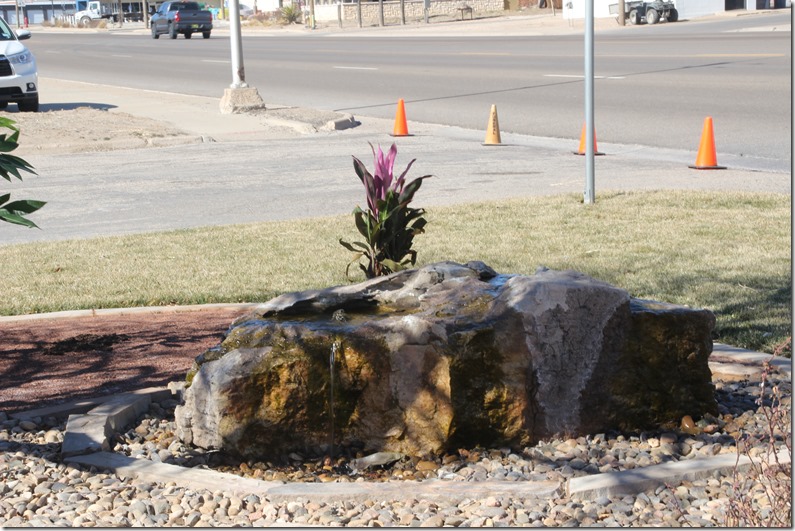 So the project was complete, and the time had come for the dedication. Chairs were set up for the family, a sound system was in place for the speakers and music, and Cannon AFB in Clovis sent the Color Guard to present the flag. 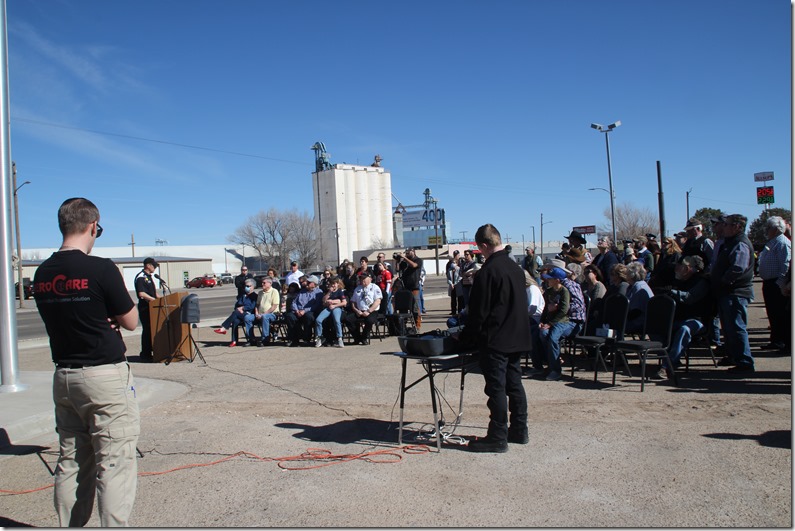 Jene Wilton opened the ceremony with a prayer and introduced the Color Guard who then presented the flag and hoisted it to half-staff, followed by the playing of Taps, followed by the National Anthem. 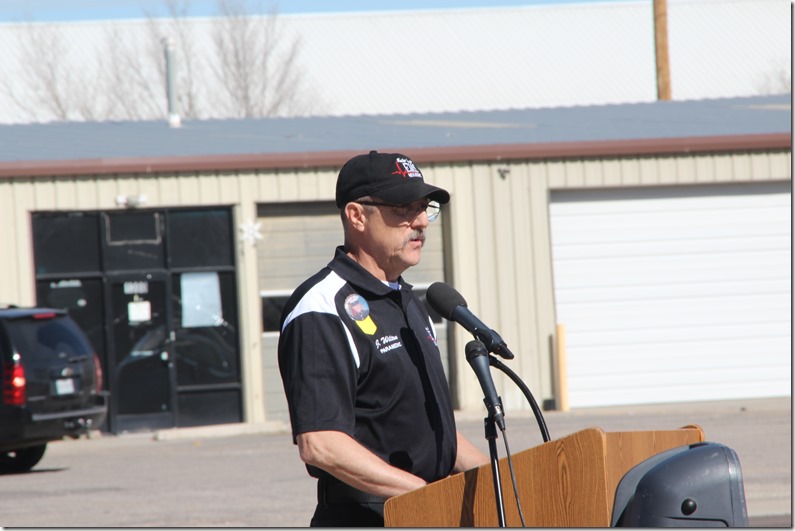 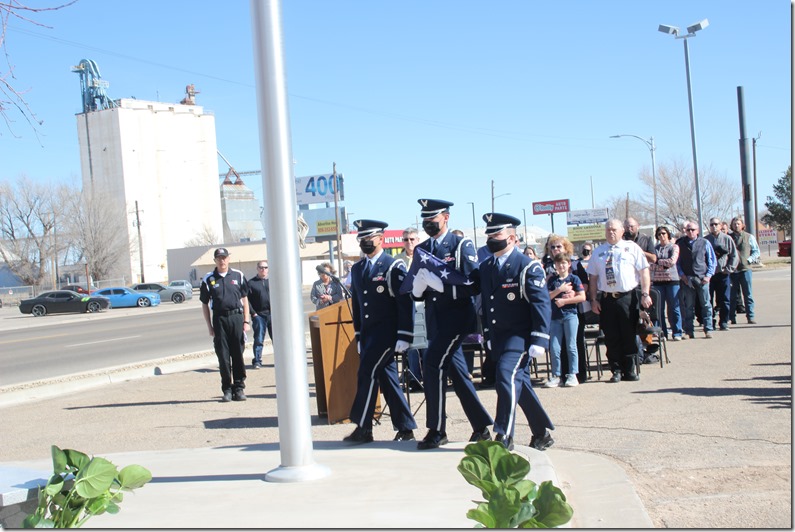 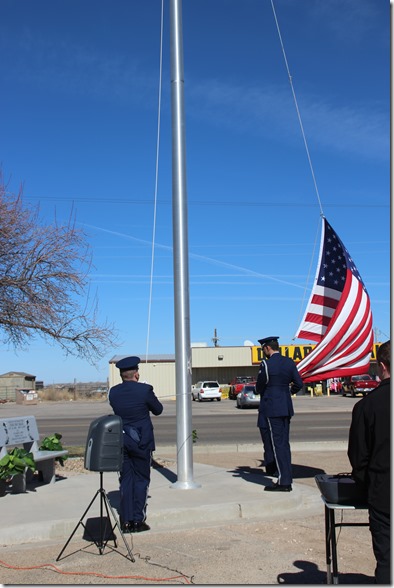 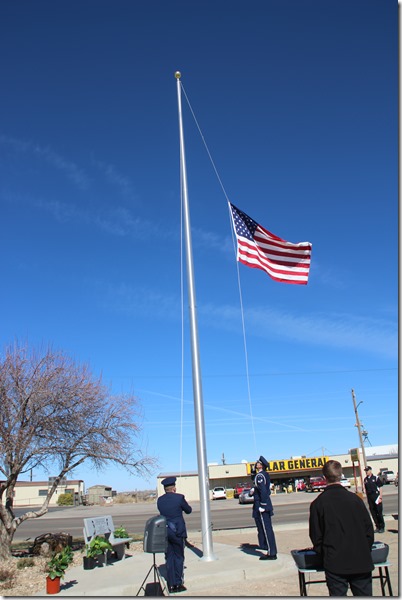 Jene recognized family in attendance and other guests and gave some history about Chad’s desire to serve in the military, like the fact that he didn’t let a broken arm keep him from entering boot camp. Jene then invited Kem to the podium to say a few words. I fear I was so intent on listening to Kem I failed to take a picture, but I suspect that’s fine with him. He expressed his gratitude for all the work that went into the project and especially thanked Cannon for sharing their Color Guard with us, something the base is always willing to do. The Bales family was moved by the sight of the flag flying quietly on the pole. 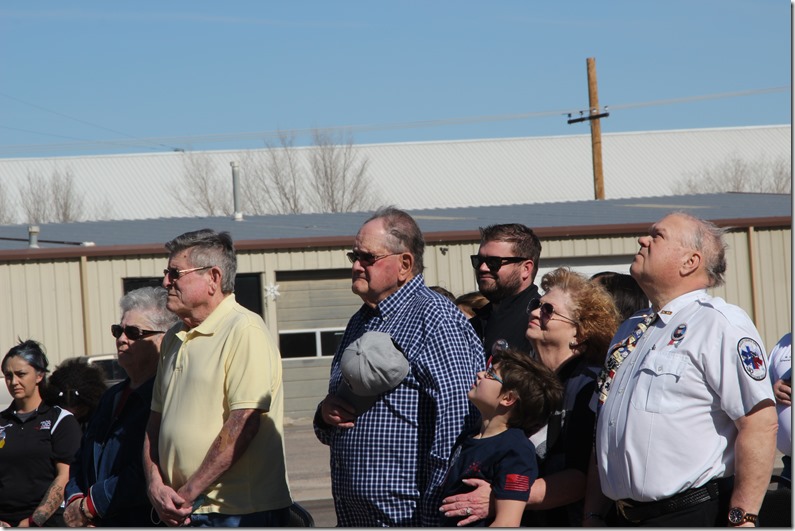 The Color Guard then saluted the flag and solemnly marched away. 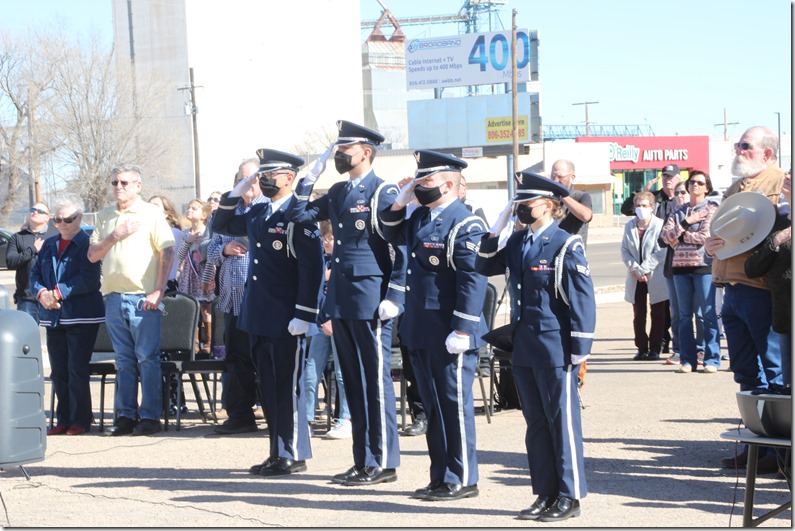 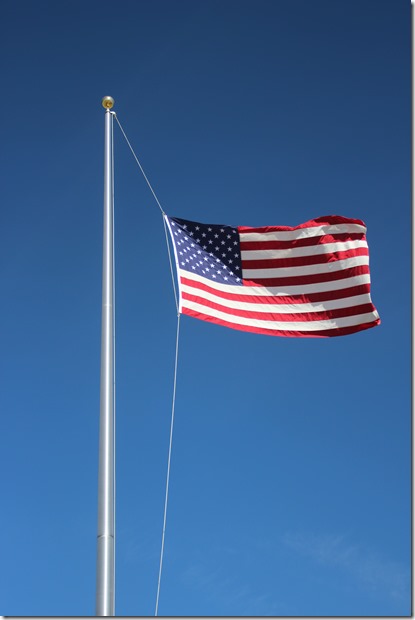 The group was then dismissed and invited to visit and enjoy the refreshments served inside the building by the EMS employees. The refreshments were more like a meal: mini-pigs in a blanket, shrimp cocktail, steak bites, baked sandwiches, fruit kabobs, a beautifully decorated flag-themed cake, flag cookies, iced tea and water. They really outdid themselves on the food! Visitors were also welcome to tour the facilities while they enjoyed the refreshments. 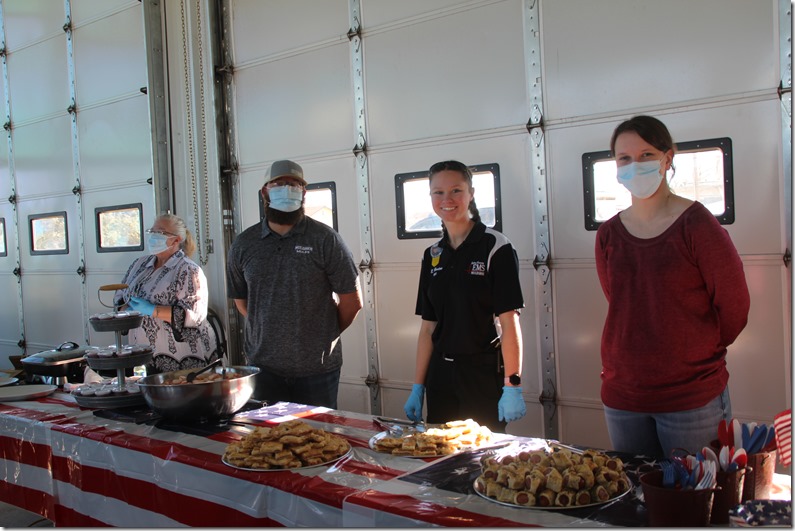 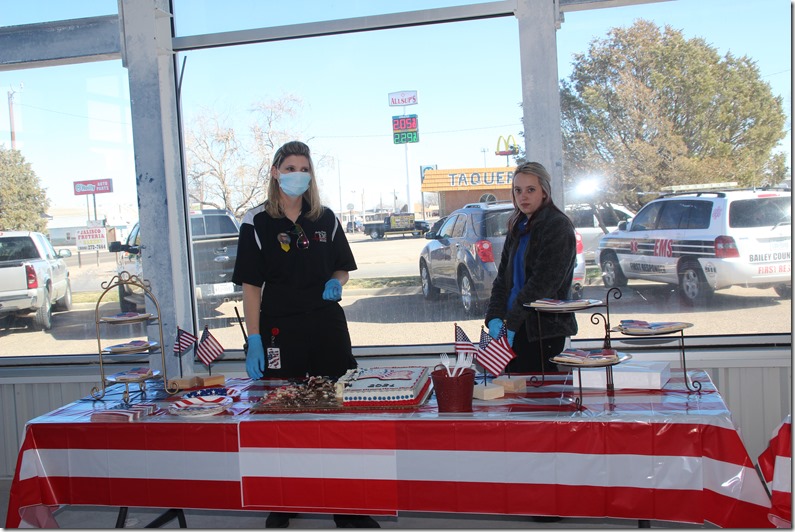 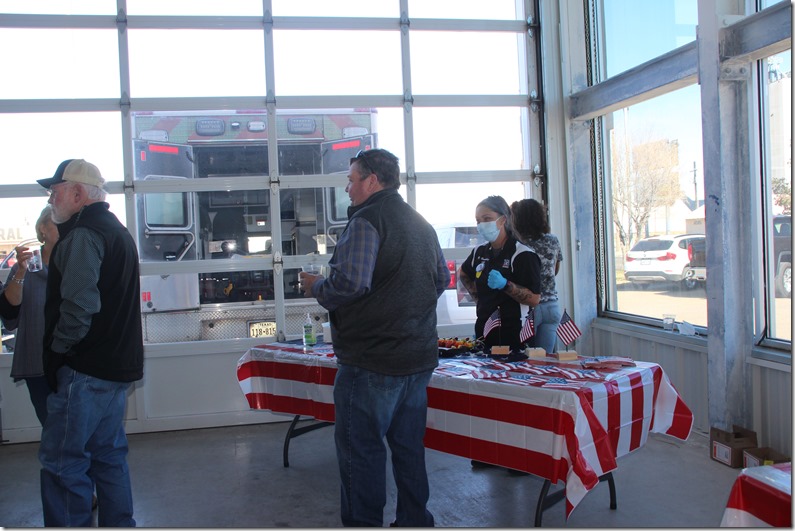 Sunday brought warm sun and a bit of wind for the dedication, but the wind was something of a plus because the flag unfurled beautifully as it was raised by the Color Guard and then continued to wave gracefully all afternoon. 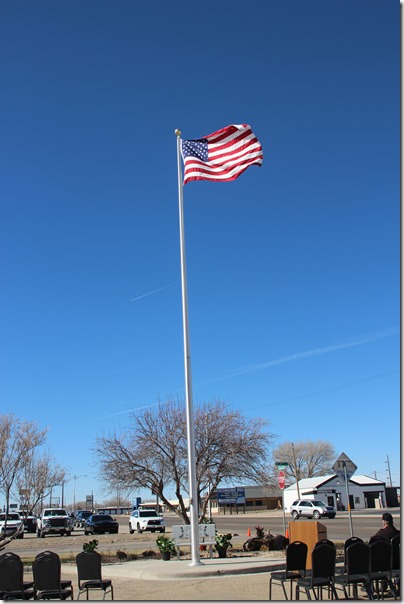 When spring comes, the trees will provide shade, the plants will be green and leafy, and Chad’s flag pole and bench will provide a place of welcome respite for all who need to get away from the world for a moment. 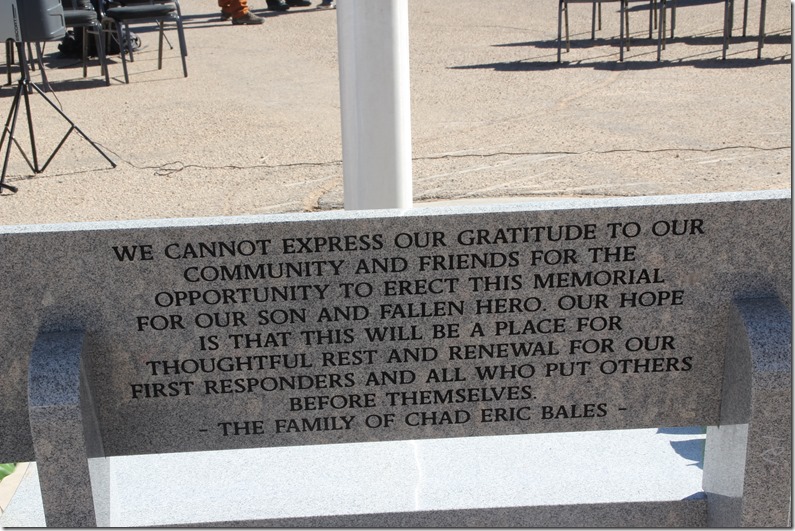 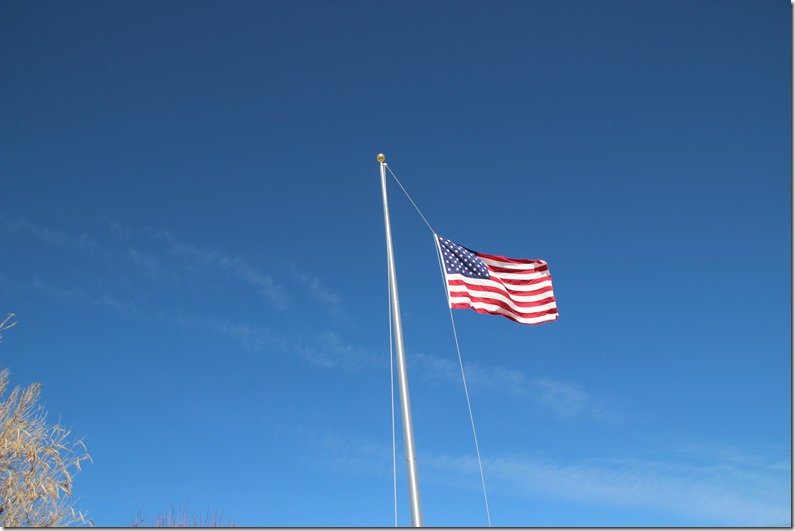 Thanks to Jene Wilton, Laramie Fulcher, Kevin Baize, Kem and Lori Bales, and Corie Ann Ingersoll for their help with this story.

For another story that Chad is in and that pays respect to our military, read “Remember Our Fallen Heroes comes to Muleshoe,”  February 20, 2019, in this same blog. And one more story recognizing those who served in the military from our area is “The Wall of Honor,” July 9, 2020, also in this blog.