Nelda Hunt likes to prowl in alleys. Well, of course she does! That’s where she finds all that sadly discarded stuff and gives it new life. Alleys, dumpsters, flea markets, estate sales, junk stores, thrift shops, friends on a cleaning binge, herself on a organizational spree-all these sources provide Nelda with myriad items to work her magic on. I was invited to visit Nelda’s yard, the repository  her amazing creations the other day. I was not disappointed.

Nelda met me at the front door, an area she has just redecorated with favorite items, all with a story, which is why they are some of her favorite items. Good friend and repurposer Toni King painted the old chair. Look closely at the planter in the corner. Can you tell what it used to be? 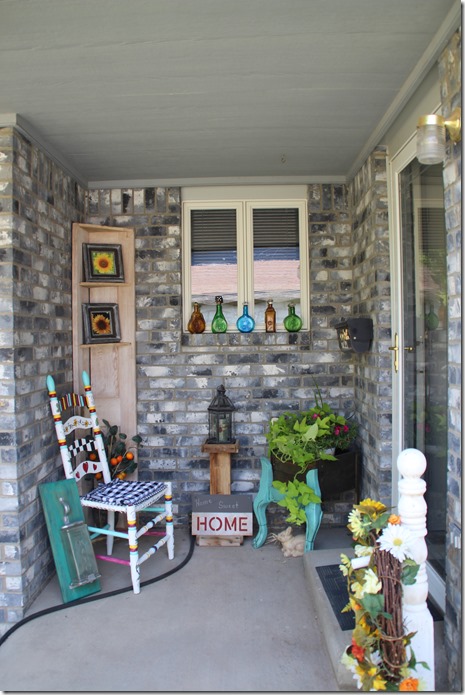 Walking up to this entrance, the flower bed edging the grass displays the Hillbilly Commandments and various repurposed items, like the crosses made of castoff belts and old horseshoes. 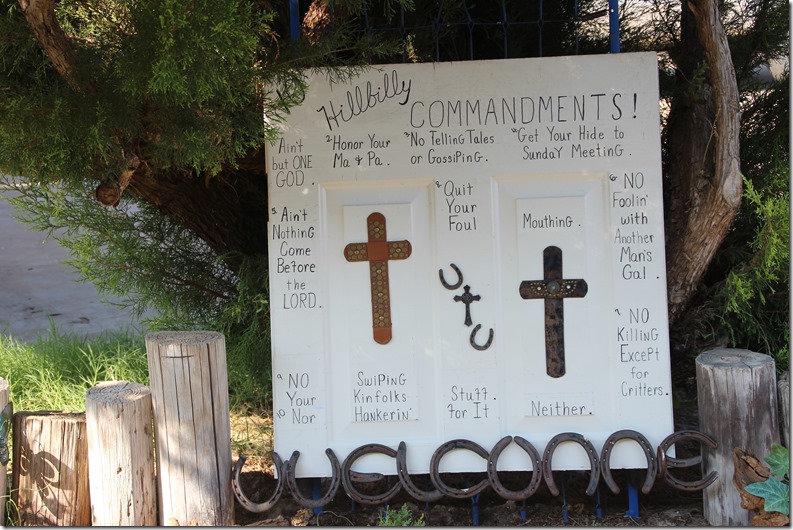 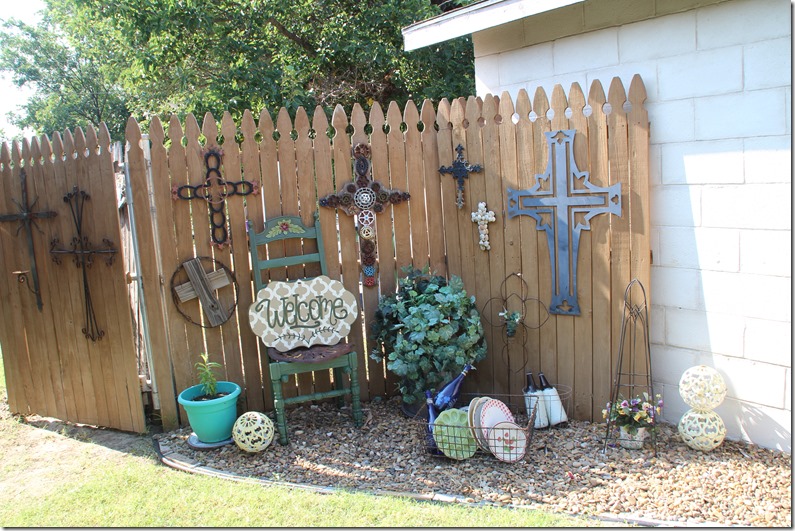 To the left of the crosses is an area devoted to birds; bird cages, bird houses, bird statues, and things that birds would like. 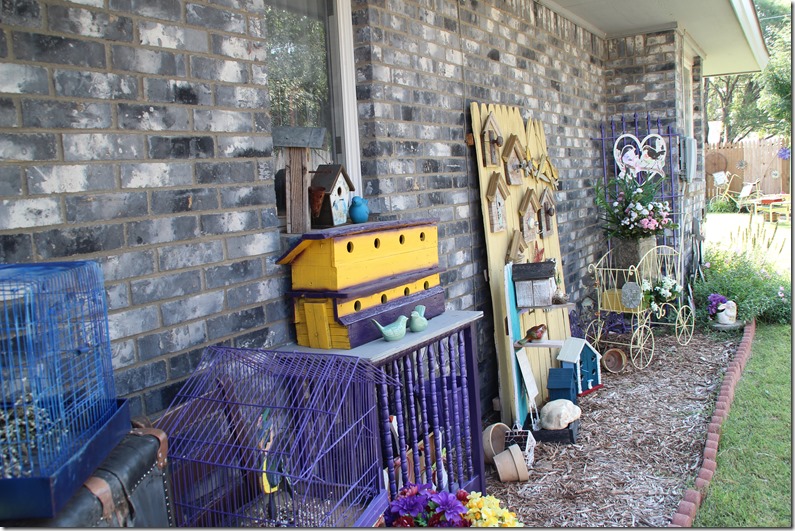 I really liked the bird house fronts made from wooden picture frames with a variety of hardware where the door to the bird houses would be. Nelda’s other partner in repurposing, Phil Gaasch,  helped with the carpentry here as well as with other projects that might need his wood-working skills. 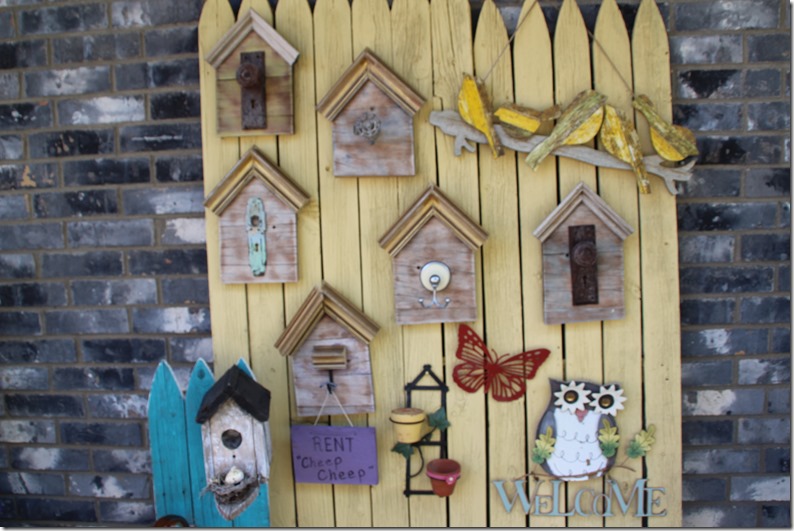 Across from the bird area is the angel corner. The big angel was rescued from a junk pile in Clovis, painted and given a new life. 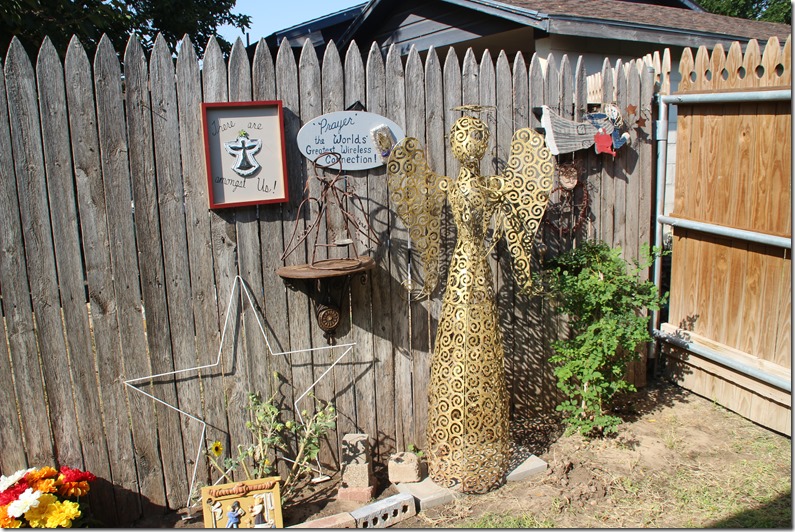 The signs on this fence are painted on wood collected from the fence that was around the Yellow Jacket, She likes incorporating things with a connection to Muleshoe history. 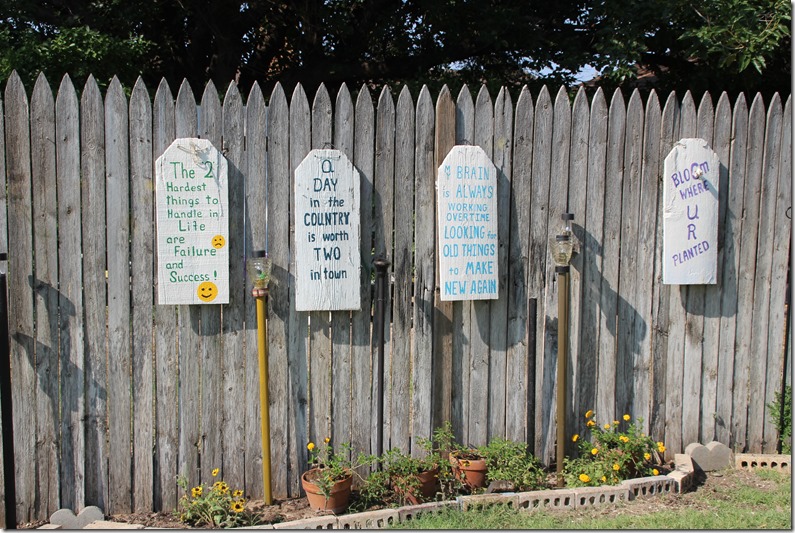 I was really impressed with the creative and innovative work that went into this wreath made out of all kinds of stuff. Who doesn’t have a bunch of keys that no longer have anything to open? See what other items you can identify in this little work of art. 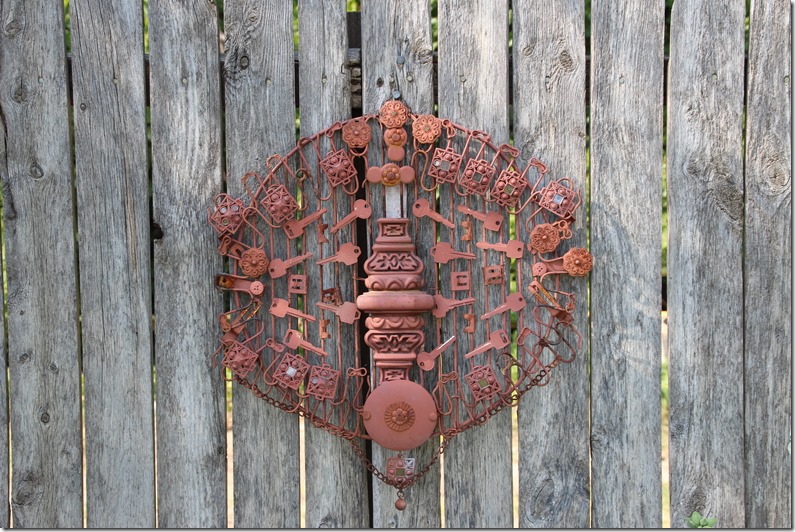 Nelda has a nice little arbor built under the tree in the corner, sort of what she sees as an observation bench made out of assorted wooden bed pieces, a metal arch, concrete support for the seat, a marble slab resting on railroad ties. It’s a place where Nelda says you can sit and marvel  at God’s creation and observe various yard décor made with discards and castoffs of our throw-away society, like the table in front of the arbor made from a cut down barbecue grill holding a gnome rock garden. The area under the tree is replete with lady bugs made out of bowling balls, mushrooms that used to be lamps, flowers made of old hot plates, and all kinds of odds and ends found in J.K. Adams’ storage shed Nelda bought at his estate sale for a whopping $3! As we walked to the different areas and I would ask where that piece or this piece came from, many times the answer was J.K.’s storage shed. Just as many times I was told which alley in town the pieces came from. 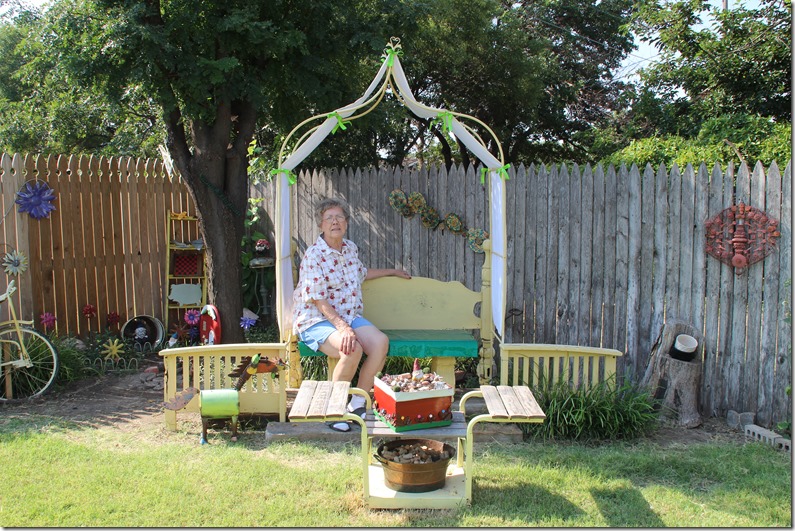 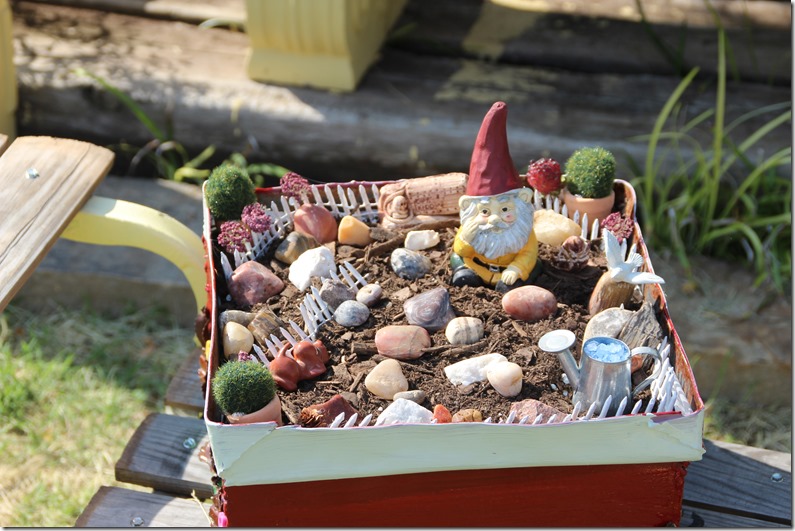 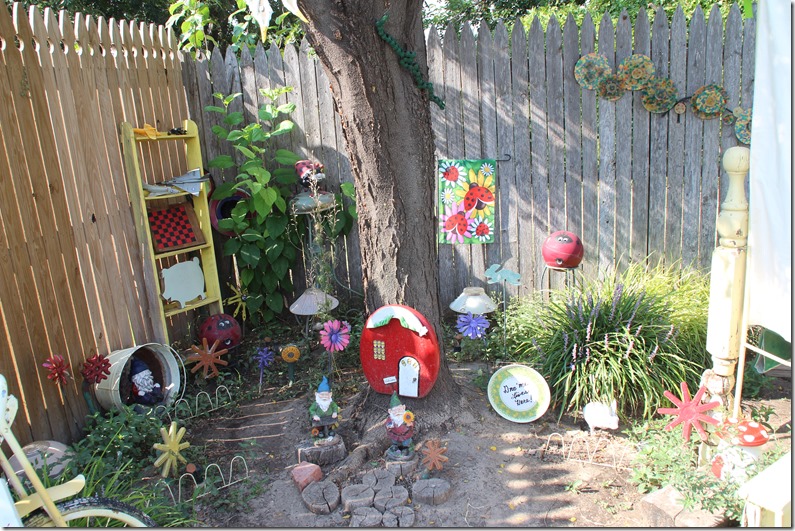 The bicycle and tricycle were leftovers left for the Hunt kids when Dr. Sanderlin left in the late 60s. 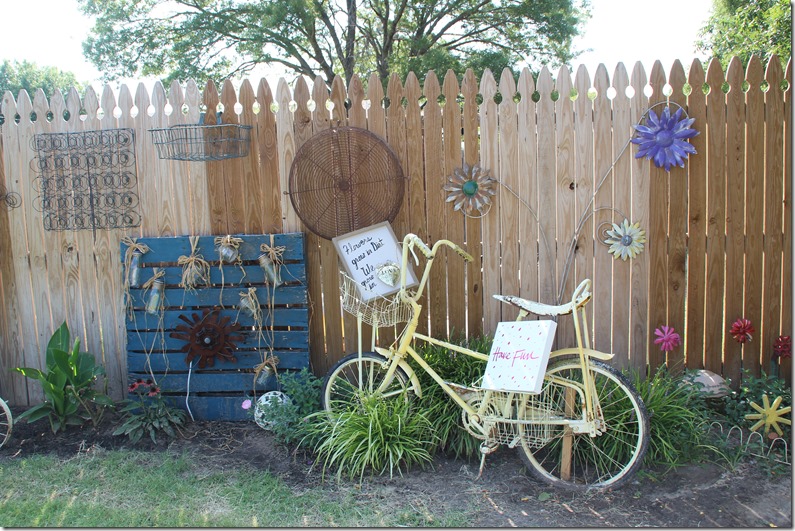 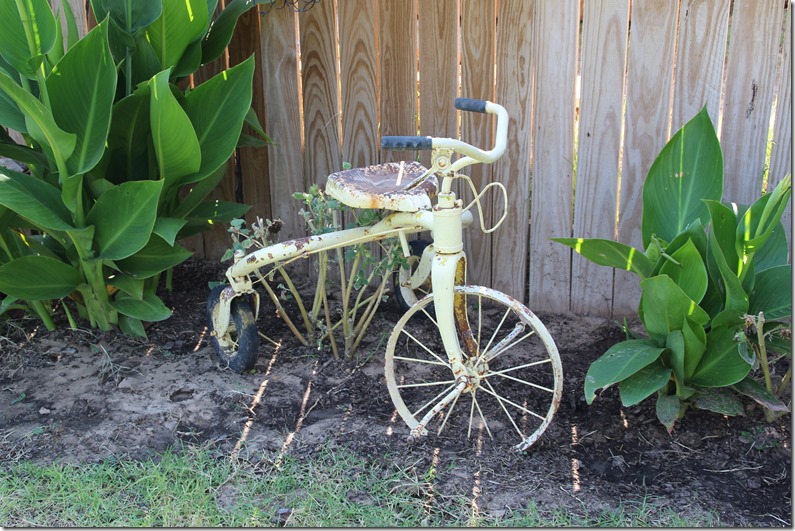 Continuing around the back yard is the red, white, and blue patriotic corner, and then the Robert and Nelda Hunt farm display. This wall is decorated with items Nelda brought with her when she and Robert moved into town after forty-seven years on the farm. 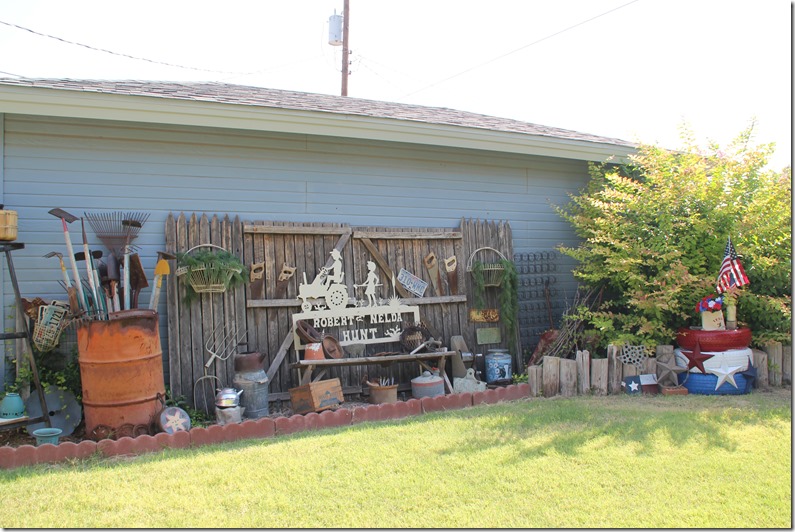 Robert grew up in the Longview community near Coyote Lake, and Nelda’s family moved here from Littlefield in 1948 when she was seven. Nelda’s dad was a dryland farmer in Littlefield, so when farmers in Muleshoe began relying more on irrigating crops, he decided it was worth the move.  Robert’s family farmed in West Camp, and after Robert and Nelda married, they continued farming there. By 2013 the drought had done its damage and  Robert was beginning to have health problems,  so they bought this house that had been the home of John Smith and later Flo Jones and moved into town.

During all this time, they also raised a family. Daughter Sheila Black lives in Lubbock, daughter Tori  Widner lives in Bovina, and son Curtis and Lavon Hunt are here in Muleshoe. Between them they blessed Robert and Nelda with six grandchildren and ten great-grandchildren.

In 1991 Nelda took a job at the post office substituting as a rural mail carrier for fourteen years during the day, and then 1996 became a night greeter at Ellis Funeral Home at the same time. The substitute mail carrier job was just that, subbing when needed, but the night greeter job at the funeral home was constant. Nelda said that was her way to serve people in their time of need. In 2001 Robert began transporting the deceased for the funeral home when the person had died somewhere outside of Muleshoe. They made trips to Fort Smith, Arkansas, for example, and all over Texas and New Mexico. Nelda quit both the post office and the greeter job in 2006 so she could go with Robert on his Ellis Funeral Home trips. She said she would browse one junk store along the way and always come home with a treasure or two.  Robert really enjoyed the transporting for Ellis, but retired in 2014, so Nelda then had time to start making flower beds and working on trunks.

Robert died in 2016 after fifty-six years of marriage. Even though Nelda had started work in the yard, she had been too busy to decorate much with all those things she had collected. They both were involved with their children in 4-H, Rainbow Girls, the church, PTA, stock shows, and activities in the West Camp community along with farming and jobs. But life goes on, and now she has time to think of ways to use all that stuff she brought home and has collected and what people got in the habit of bringing her. Take it to Nelda, she said friends like Sandy Bass always say, Nelda will think of something to do with it.

As you come to the end of the farm display, there is the doorway and porch to the work shed where she does her work. Items highlighting her love of sewing are on display, like the old treadle sewing machine and quilts that are prominently displayed; the quilts come in when the weather is bad. Nelda quilts for family and friends, but also makes quilts for others. 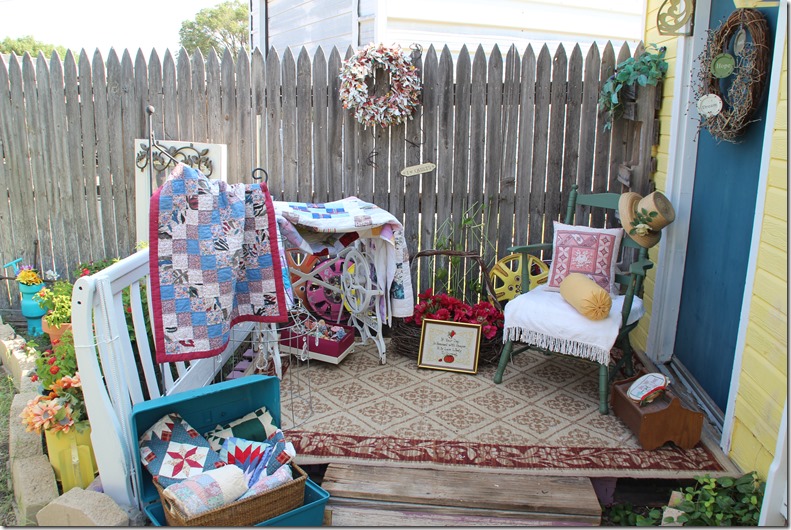 The north fence has a wonderful dragonfly made of bed posts and fan blades painted by Toni King. 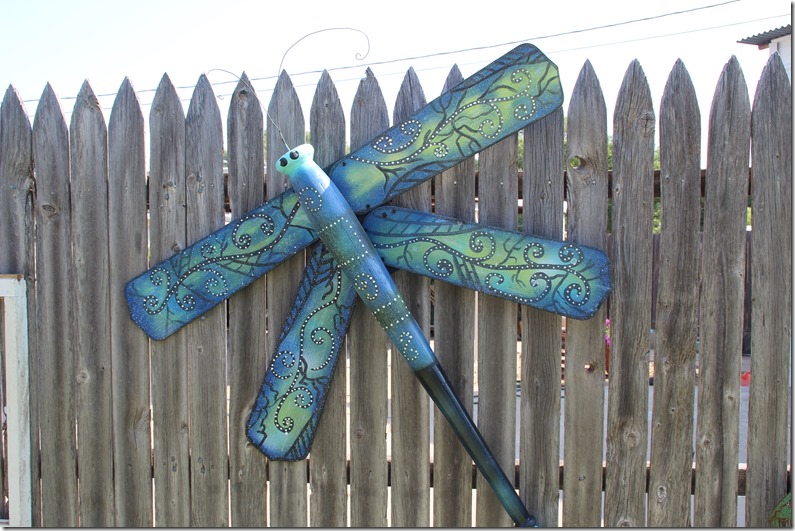 I don’t have a bottle tree; it really wouldn’t fit in with the Southwest/rusty stuff theme of my garden. But if I had one, this is what it would look like: all the same color bottles on a cedar post trunk. Makes sense-shouldn’t a tree have a real wooden trunk? Raygena Barrett supplied the bottles, and daughter Tori came up with the cedar post. 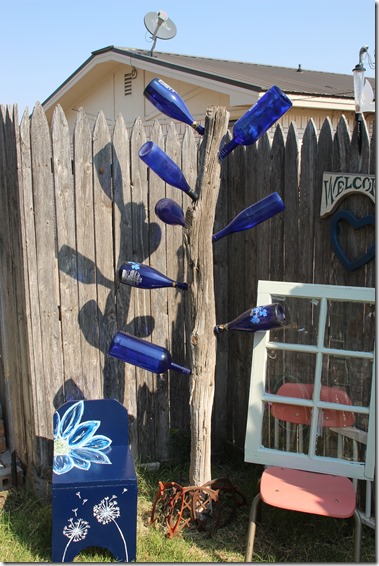 Nelda redoes old trunks for herself and others. She started this in the 70s and said every trunk tells a story, which I think is part of why she enjoys refinishing them.  Some are more polished and finished than this one, which is not ready to use in the house, but it works well here.

So she refinishes trunks when people hire her to do so. Keep in mind I have mentioned she also makes quilts for family, but also on order. Then she said she spends her “spare time” mending and doing alterations for family and the public, as she enjoys the challenge of making things fit and creating something from nothing. She said sewing was really her first love. And before I left, fulfilling a bread order was mentioned. I couldn’t help but wonder when she has time to do all that and then come up with all her repurposing ideas. She laughed and said Toni does her painting, Phil does the woodwork, and that all she does is stick and glue, mess and glom, as she put it. But she is one who discovers the materials and has the artistic vision, so I say she does much more than stick stuff together. And she enjoys doing all these things rather than just sitting. 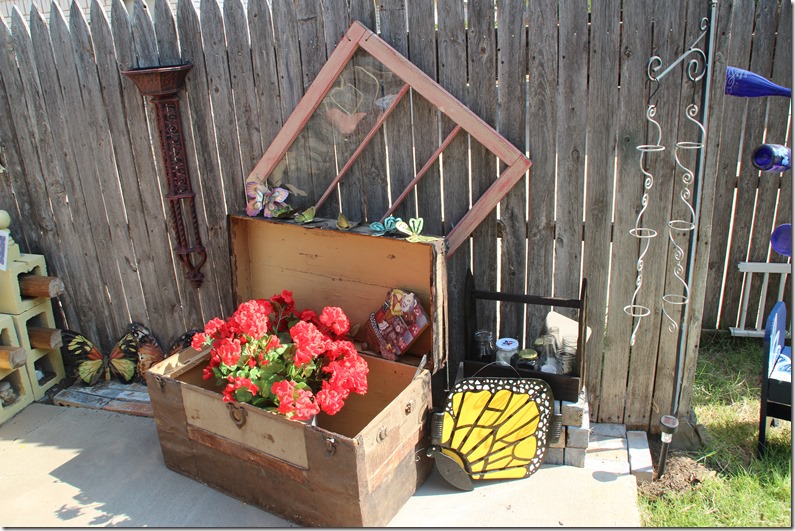 What looks like it could be a living room or a seated visiting area shows all kinds of things given a new purpose-and it works! You might recognize part of a bed headboard, sofa cushions, cinder blocks, a coffee table made of a variety of spare parts and the  top of a chest of drawers, and small decorator touches. I like this! 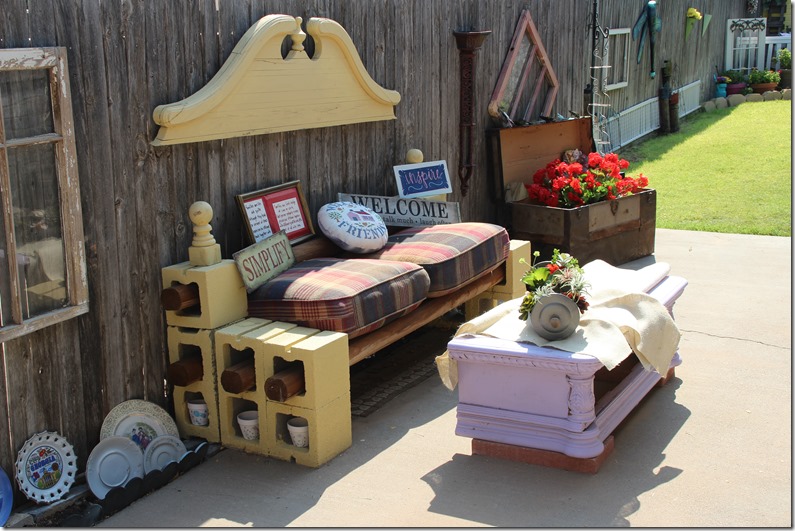 On the wall facing the sofa area is a recycled dresser found in the alley with  no drawers, but showcasing all kinds of neat stuff-crocks, fireplace markers, and all that hardware on the weathered board above the dresser. 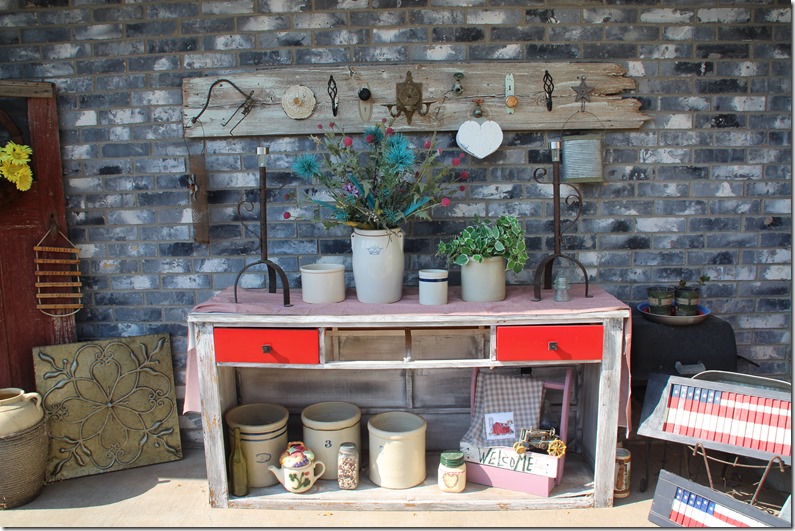 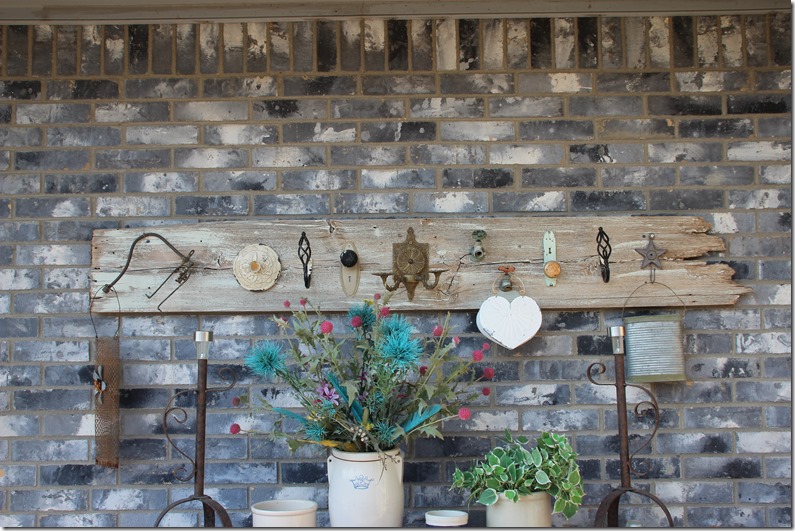 People have given her commemorative plates they no longer want, so she just groups them together rather than just discard them. 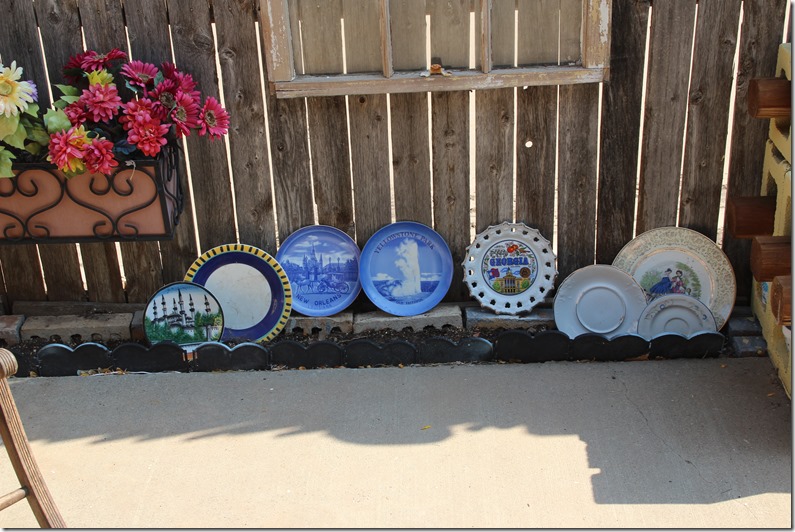 As I was leaving, I spied these rusty paint cans that Toni had transformed with some paint and Nelda hung on this iron pulley. I really like the cans, but especially the pulley. Now that whole display I could find a spot for in my garden! 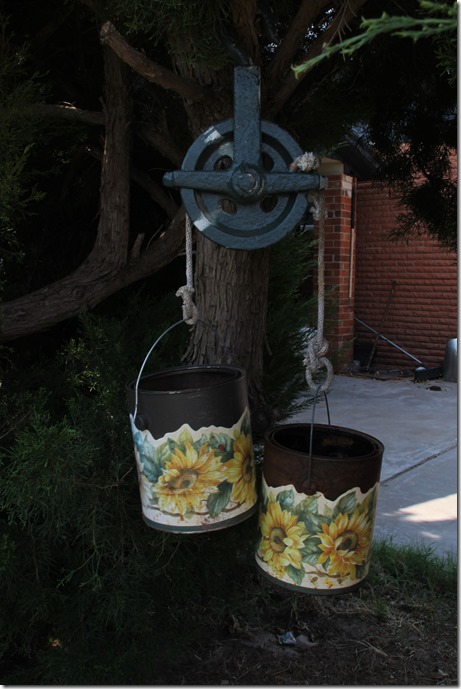 Our throw-away society really dismays Nelda. Why discard something that with a little thought and ingenuity can be used again and not added to our growing landfills? Why waste what we already have?  Using the brains that God gave us and creating something artistic instead of just casting things aside is a satisfying endeavor for Nelda. And while Nelda’s brand of decorating might not be your choice of design, I promise you will find an idea or two lurking about that might give you inspiration for a way to recycle something of your own. And you will have fun just looking at all her stuff.

I really enjoyed seeing all the neat things Nelda has done with odds and ends that most of us would have overlooked. To really appreciate some of her creations, you need to see them up close and in person. I have only shared a small sampling of what you will see if you take the tour of the yard. And Nelda would love to show it all to  you! 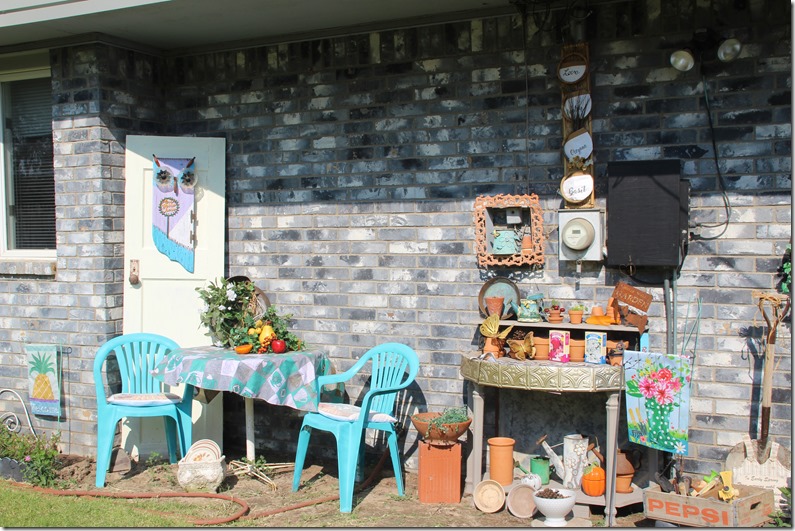 Give her a call and be prepared to be amazed at all the things you see.

Thanks to Shirley White for making me aware of  Nelda’s treasures and to Nelda Hunt for graciously sharing her garden with me.