The Bailey County Cemetery and Its Association

An historical marker stands at the entrance to the Bailey County Cemetery stating that Emil and Anna Wellsandt offered a parcel of their land to become a cemetery for the young town of Muleshoe located in Bailey County, Texas. This was during the time of the Spanish Influenza outbreak and bodies needed to be buried in a timely fashion, so when Mariah “Aunt Rye” Long and others died, the need for a cemetery became critical, and the Wellsandts filled the need. The actual deed on record is dated April  18, 1919, for four acres, and the purchase price was $1.00. Some headstones in the cemetery are dated earlier than 1918, perhaps in part because of the disease as well. 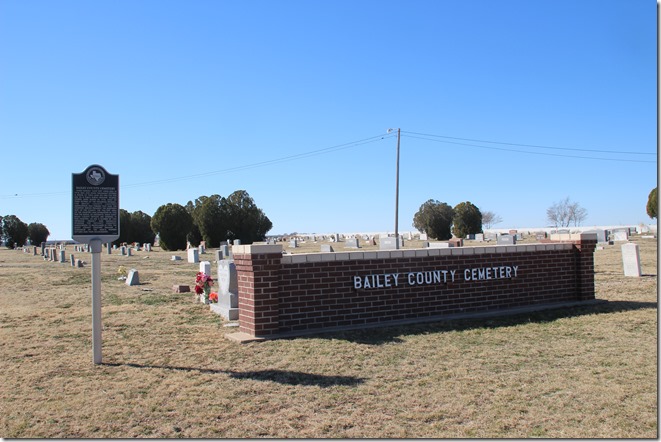 Typical of this time period, a separate section of the cemetery called the Hill Top Cemetery was set aside for the African American population and also became the resting place of indigents given burial by the county. Today Hill Top Cemetery is simply considered a section of the whole cemetery, and anyone may buy a plot there or in any of the other sections of the cemetery. Indigent burials are still done in the Hill Top property. 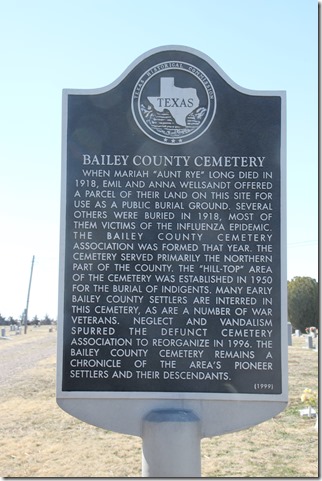 This cemetery, having no perpetual care trust fund, nor belonging to the county, would look to the families of those buried there for its maintenance, so the Bailey County Cemetery Association was created to keep things organized and in good shape.

Time passed; additional acreage was deeded to the cemetery by Mr. and Mrs. Gilbert Wollard in the 1930s, and by March 1, 1939, the cemetery reached its present size of twenty-six acres.

And sadly, as time passed, fewer people took part in the Bailey County Cemetery Association with less care and attention being given to the family plots. Minutes from a meeting of the Association in 1961 are the last on record from that time period. Interest in an organized group to support the cemetery had dwindled on the part of many of the property owners, the county helped out minimally,  and no one gave it much thought.

Neglect had taken its toll on the quiet cemetery over the years, and then in June of 1996 when vandals desecrated the graves, it became obvious that it was time to reorganize and take care of business, so the Bailey County Cemetery Association was brought to life again. On August 15, 1996, twenty-seven concerned family plot owners and citizens met to get things back on track at their cemetery. Plans were discussed and finalized with the County Commissioners Court that cemetery records would be kept in a county office since the Association had no official office, and limited maintenance from the county was agreed upon and funded. Keep in mind, however, that the cemetery has no perpetual care trust fund, no commercial business backing, and does not belong to the county, so family plot owners are  the property owners; hence they are in charge, and the major upkeep of their plot is their responsibility. 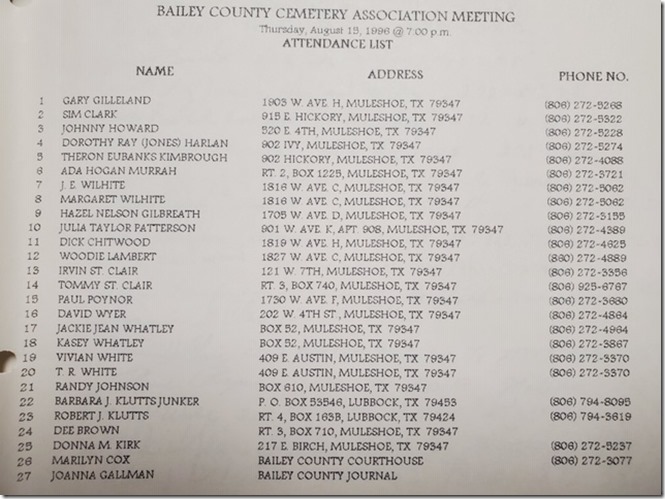 So the bad news was that vandals had no respect for the cemetery; the good news was that the Bailey County Cemetery Association was back in business because of that vandalism. Since that meeting in 1996, the Association has had  yearly meetings, elected officers and board members, held workdays to tidy up the cemetery, sent out newsletters to members, and began hosting an annual Memorial Day service each May.

For many years cemetery records were in the county judge’s office under the direction of  County Judge Gordon Green’s secretary Paula Benton, until Donna Kirk became County Judge Jimmy Watson’s secretary, and then she was in charge of the records. When Donna became county treasurer in 1998, she had become attached to the records and had started producing the Association’s newsletter, so she just moved the records with her to the new position and continued her involvement with the Association. After eight years as county treasurer, Donna left that county position to go back to school, but still handled the records from home. The records were later put under the direction of Kevin Smith who was in charge of the Bailey County Coliseum, and that kept the records in a county office. Donna continued to do the newsletters for several years until moving to Lubbock in 2011. The records were later moved into the Office of Aging, and  in 2016 Judy Coffman, the Association’s secretary/treasurer, began editing the newsletter, which she sends regularly to the 400 members of the Association.

For a few years Johnny Howard, the county maintenance person, occasionally mowed and would mark with flags the corners of the graves to be dug, but when he moved that job fell to the Association and Donna took over the job. She remembers late one night when she forgot to do it before a funeral to be performed the next day. So she roused husband Lacie out of bed and they rushed out to the cemetery in the dark, flashlights in hand, and managed to get the grave marked for the next day. When the Kirks moved to Lubbock, Terome Clemmons filled in for Donna to mark the graves and continues that job today.

The Memorial Day Service mentioned earlier came about after the Association was revitalized. Vivian White, Anne Camp, and particularly David Wyer, as well as other members, saw the need for Memorial Day services and felt like the cemetery was the appropriate place for that to happen. After all, many veterans are buried there, including this headstone honoring Spanish-American war soldier Francis N. Dominick. 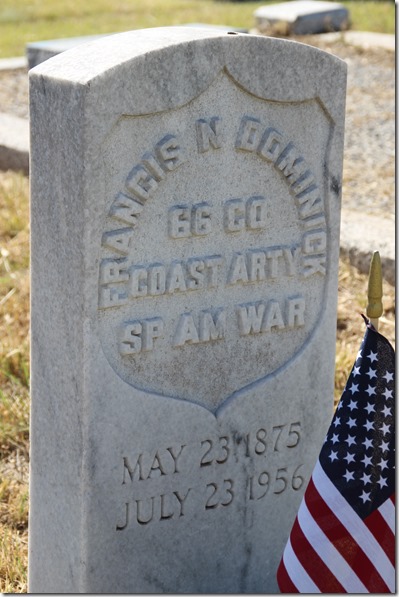 A group decision was made, and  the first annual Memorial Day Service at the cemetery was held on Memorial Day in 1998. They have continued since then, the only such observance to be held in Bailey County. Unfortunately, due to the coronavirus, current President Jerry Bruton said this year’s service will not happen. The board involves a variety of people in uplifting and patriotic programs, and it will be missed. Members of the Muleshoe American Legion always put American flags on veterans’ graves and that will be done again this year in spite of the virus. 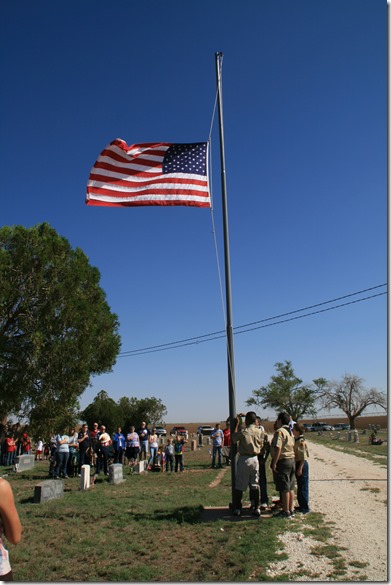 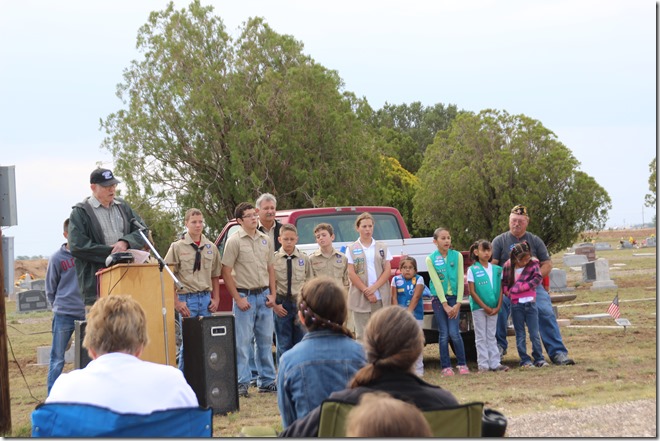 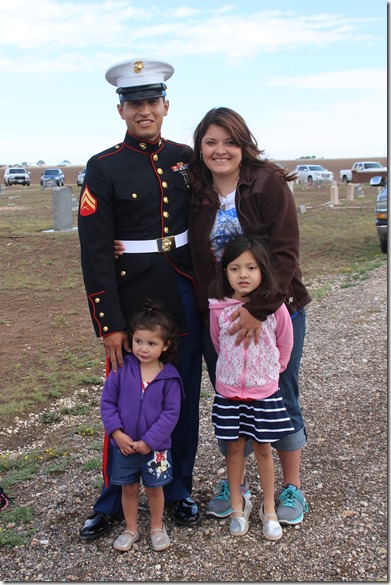 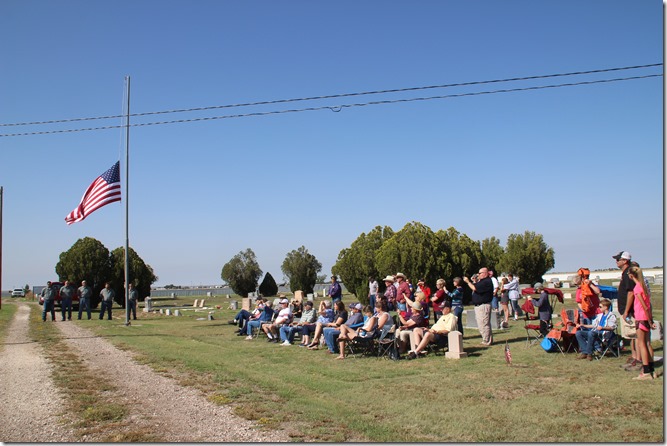 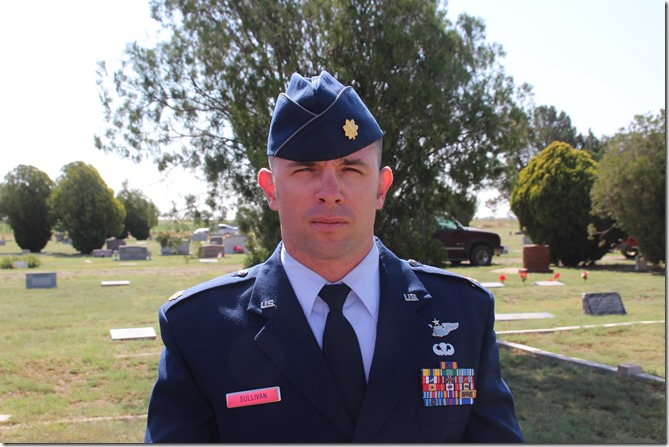 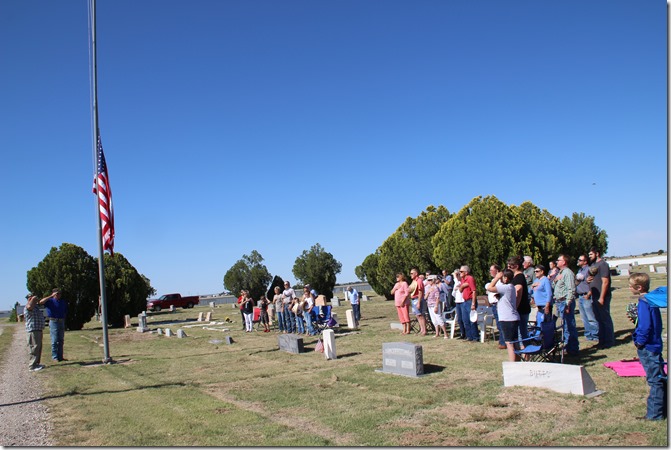 Gary Gilleland got the ball rolling back in 1996 to get people involved again in the care of the cemetery. Others who have given much time and effort and have served on the board as officers and/or directors, include David Wyer, Donna Kirk, Paul Poynor, Vivian White, Irvin St. Clair, Ancel Ashford, Jerry Hicks, Dick Chitwood, Marshall Head, Jerry Bruton, Tadd Young, Basil Nash, Raul Torres, Kevin Smith, Terome Clemmons, Chad Nickels, Judy Coffman, Tony Fullen, and many others.

The first slate of officers who served in 1996-98 were David Wyer as President, Gary Gilleland as Vice-President, Donna Kirk as Secretary/Treasurer, and Dick Chitwood, Paul Poyner, and Vivian White as  Board Directors.

The care and upkeep of Bailey County Cemetery in honor of those laid to rest there is a labor of love and a responsibility not to be taken lightly. If you have a family plot you  haven’t visited in a while, take the time to become involved in the Association and do your part. If you have no personal ties to the cemetery, next Memorial Day, make the trip out to the cemetery to honor the fallen and getting to know others who have family buried there. It’s a short drive and worth the trip.

To read about the previous Memorial Day services pictured here, type Memorial Day in the Search line. Several story titles will come up for your viewing.

My thanks to David and Dorothy Wyer, Donna Kirk, Judy Coffman, Jerry Bruton, Terome Clemmons, Kevin Smith, Bruce Purdy, and Sherri Harrison for their help with this story.