Willie Mae Graves and Irma Leal were fast friends. They spoke every day on the phone and had agreed that whoever died first should be buried with her cell phone so they could keep in touch. When Willie Mae died in 2018 and her daughter Sandra was seeing to it her mother’s funeral plans and wishes were carried out, she couldn’t find the phone. She asked her brother Sonny (Arthur) where Willie Mae’s phone was. He asked why, and when she told him about the pact between the good friends, he didn’t stop to think and said, quite seriously, “Well, she won’t have any service down there (in her casket).” They looked at each other for a second and then laughed at another happy memory they would have of their mother. 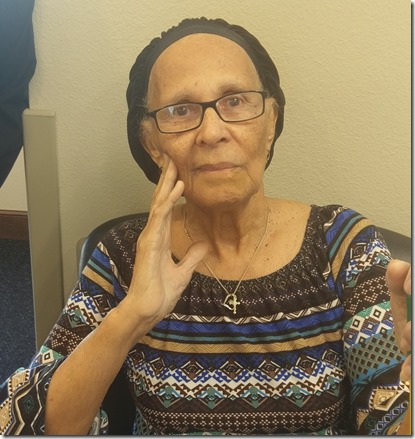 Judging from the reactions I encountered when learning about Willie Mae, many people have happy memories connected to this woman who served the Lord she loved by cleaning houses, running the drive-in movie kitchen, cooking meals, nurturing children, raising her own nine children, volunteering at the nursing home, and making the world a better place in so many different ways.

Willie Mae was something of a legend around here–cleaning, cooking, organizing funeral dinners, taking care of nursing home residents,  loving kids-her own and most everyone else’s. She cleaned house for a couple of families in Lazbuddie and Muleshoe. Word spread of her good work and loving, congenial personality, and before long she was working for several women in the area: Jo Ann McGuire, Betty Smith, Shirley Steinbock Smith, Marilyn Engelking, Cookie Bamert, Elinor Yerby, Berta Combs, Irene Hutton, just to name a few. She developed a system, a schedule so she could work with all these families and still have time to run the kitchen at the local drive-in when the Pummills owned it and later for Dr. Purdy, and myriad other tasks she was not asked to do, but wanted to do. That’s what she did; when there was an unexpected need, she filled it.

When there was a death in the black community, she and good friend Ella Wese Norman made sure food was on the table at the funeral service. They cooked many dishes themselves and also enlisted the help of others. They could always be depended on to get this done. Willie Mae was the older of the two women, but she always called Ella Wese Miss Norman out of respect for her. Ella Wese had no less respect for Willie Mae, but she always called her by her given name, something Ella Wese’s daughter Jimella Norman Clemmons never quiet understood. But the women had their own way of doing things, and this was one of them. Jimella also told me that some people are lucky enough to have one great mom, but she had two great moms, quite a compliment to both women. 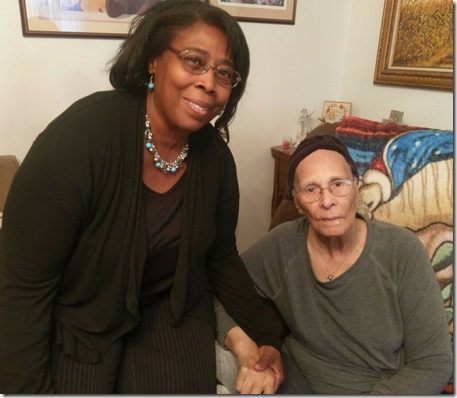 Jimella said one time when her mom was sick and hospitalized, she had a dream about a fish that in her mind was symbolic of her dying. Willie Mae had not lost her sense of humor in this serious situation,  something else she was known for, and said to Ella Wese, “What are you doing, leaving me with all these children!” That would be twelve Normans and nine Graves kids! Ella Wese did not die because of that dream, and they both went on sharing the upbringing of all those children until Miss Norman died in 2008.

Many was the time Jimella would go to visit Willie Mae and tell her kids she would be back in a few minutes. The kids knew better, and sure enough, two or three hours later Jimella would finally make it home.

Willie Mae was known for her hospitality with sharing the cold, fresh well water available at her house in Progress. Jimella mentioned that. Willie Mae’s stock answer to solving a problem was the comment “I’ll be praying about that; we gonna take care of it, and “It’ll be all right; just put a little cold water on it.” She said she always had a tire and a spare; that way you never woke up broke. You may not have a lot of money, but you will never be broke. And then she would remind her friends, “Remember, I have that spare if you need it.” She also baked beautiful cakes and pies for lots of people.  Her other favorite things to do were to raise all those kids, play dominoes, tend to her flowers, talk on the phone, and enjoy her collection of souvenir spoons friends and family brought when they came to see her.

Sergio Leal said she joined his St. Clements Anglican Church after the Progress Second Baptist Church disbanded and Mr. Graves died in 2002. She was always faithful and never missed a service. She had a gentle, giving spirit, especially with the children. She held babies during the service and always had peanut butter crackers to keep them occupied. Daughter Sandra took up where she left off and now brings those crackers to church. Sergio’s sons Eli and Luke used to walk ‘Nana’ to her car after the service. But she also managed on Sunday mornings to spend time at the nursing home with the residents. She also saw to it the residents were seated and ready on Sunday afternoons when local churches would come to serve communion.

Irma Leal said Willie Mae took it upon herself to take care of the Leals, too, putting together a complete holiday meal for them at Thanksgiving and Christmas because she knew they were extra busy at the restaurant. Irma never asked her to do that, but the Leal family enjoyed many a holiday dinner that Willie Mae made sure made it to their table at the right time.

One of those other people’s kids that she loved was Diane McGuire Saylor. When I asked Diane of her memories of Willie Mae, she immediately told me Willie Mae was her other mom, much like Jimella’s comment. Diane said in all those homes where she cleaned, she just automatically helped raised the kids, too, and made you feel like you were one of hers, and the kids felt likewise about her. She was one of the family. Diane went on to say she had a strong constitution, was a strong woman who ruled the roost. She was also tall- 5’ 11’’ which was most likely an asset when she had to be firm with those kids. And I could hear Diane tear up when she said softly,”They didn’t make but one (Willie Mae).”

Willie Mae was  known to have quips of wisdom, as someone called them, that were always identified with her. On telephone call waiting, which she didn’t agree with, she would say, “You call, you wait your turn to talk.” To let you know she wasn’t leaving the house to go anywhere that day, she would say that she was not gonna duck the door. To find out what you might be doing on a given day, she would ask, “What’s on the rail for the lizard?”

Willie Mae Graves was born October 22, 1929, in Graves Chapel, Arkansas, to Hattie Mae Wright and John Washington Pauley. She was born Ester Mae Pauley, but on her birth certificate she wrote in the name Willie, and that’s how she was always known. I asked her daughter Sandra if there was a story behind that name change, and she laughed and said she had never heard one. Willie Mae met her future husband, Eldridge Graves, through her brother Lee Pauley when the men were working the fruit harvest in Arkansas. They dated and wound up in Clovis, New Mexico, where they married on November 12, but Sandra was not sure of the year. They stayed in this area, Eldridge working for local farmers and Willie Mae cleaning houses. Sometimes the farmer Eldridge was working for would provide housing, but eventually his father, Granpa Arthur,  bought some land in Progress, and the whole family settled in there together. Granpa Arthur also saw to it they had a church to attend, and Progress Second Baptist Church was born. As the years passed, the family grew: Joyce; Opal Jeri; Arthur (Sonny), Darlene; Mylinda, Bill; Mary; Ella; and Sandra; nine kids who either graduated from Muleshoe High School or Lazbuddie High School and went out into the world to become successful adults. 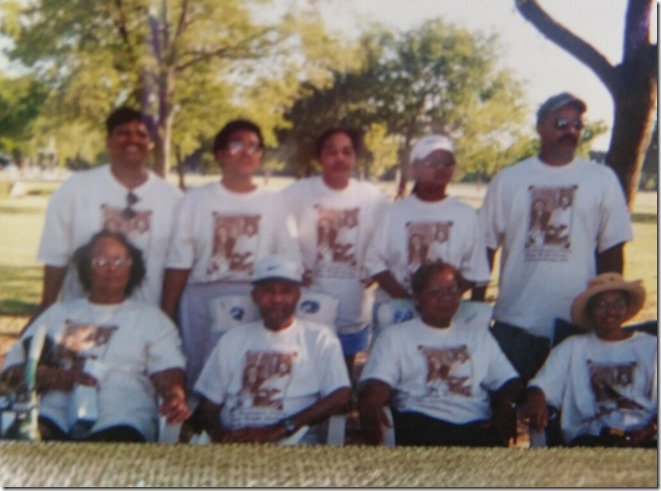 In this picture taken on her birthday in either 2015 or ’16, Willie Mae is seated, and children Sandra, Ella, Mylinda, and Sonny  were there to celebrate, along with Opal Jeri, who didn’t happen to be in this picture. Sonny, according to his sister, was being a pouty face at having to wear the Muleshoe shirt for the picture since he graduated from Lazbuddie, and I suspect brother and sisters had a good time with that. 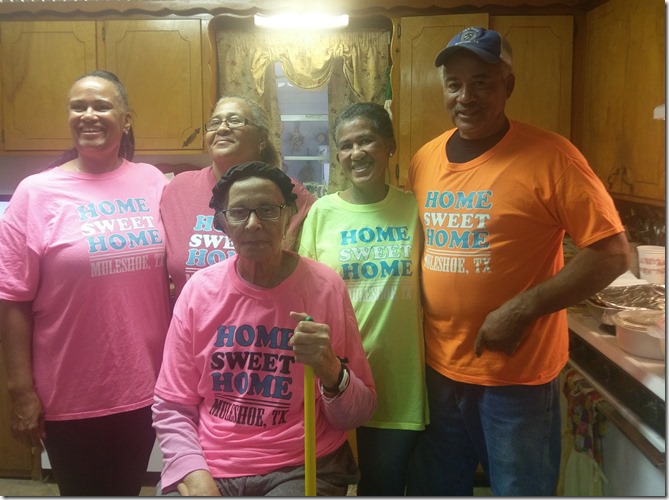 Willie Mae had to quit work in 1999 to take care of husband Eldridge, who died in 2002. But as Willie Mae grew older, she had to make frequent trips to the doctor herself. Frances Pope, Brenda Thurgill, Jimella, and Diane would take her to those appointments, go to the store for her, do whatever she needed. Diane said when she would take Willie Mae, as they checked into the doctor’s office, Willie Mae would announce to everyone that Diane was her daughter. Her son Sonny was still living in the house behind his mother’s and he also took care of his mom. But by 2017, Sonny was having a hard time spending the time needed with Willie Mae and holding down his job. He and Sandra had a conversation about that time and he said he needed help with Mom, so Sandra, who was living in California then, came home and helped him take care of their mom, which allowed Willie Mae to die at home on June 9, 2018. 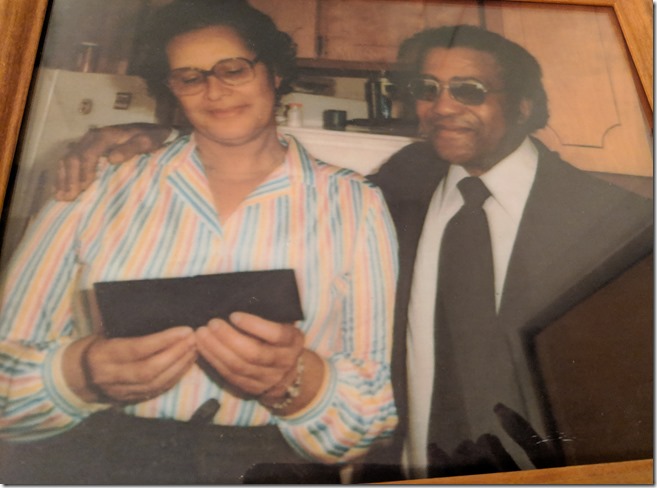 Willie Mae would always say, “This is a debt we all have to pay,” referring to our own deaths, and she was quite willing to pay that debt herself, but she had specific requests about how things should be done when she died. One was to be buried with her phone, as she and Irma had agreed. Another was to have two pillows under her head, but not so big that her nose touched the lid of the coffin. She also had a special dress picked out for the occasion. And as daughter Opal Jeri shared in the Home Going Celebration program, Willie Mae would have told you not to weep at her passing, but rather to celebrate her going home.

Opal Jeri also said in the program that Willie Mae had a close relationship with the Lord and every night when she was able, she would get down on her knees and and thank him for giving her enough grace for the day.

Her house faced the east and every morning Willie Mae would enjoy watching the sun come up, and Sandra would take a picture of it for her. 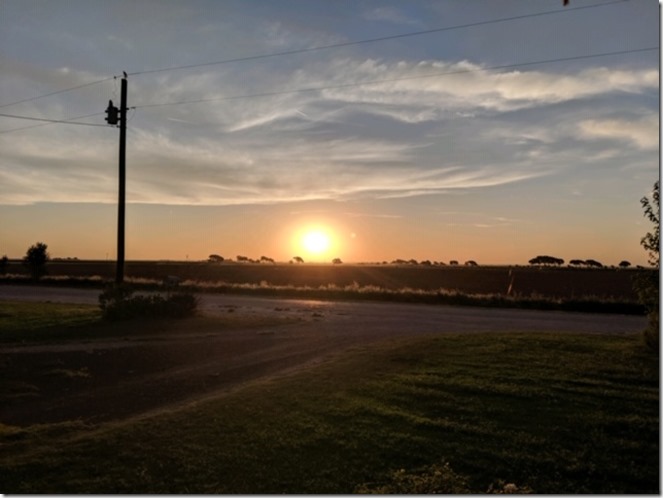 Have a good trip, Willie Mae. And thank God for everyone here for giving you all that grace to share with us.

Thanks to Sandra Graves, Jimella Clemmons, Diane Saylor, Betty Smith, Irma Leal, and Sergio Leal for their help with this story.

To view the video made in memory and honor of Willie Mae by Sandra’s friend Jason Bean, go to https://vimeo.com/296324821