The Country Schools That Time Took Away

I don’t know how often this is the case with counties in Texas, but Bailey County has only one incorporated city within its borders-Muleshoe. Incorporated cities will surely have at least one school or school district, I would think. Don’t care to research that topic, but for our fair city that would be Muleshoe Independent School District. But over the course of history, Bailey County had a total of twenty-one small schools that served communities of people and their kids scattered around out in the country miles away from the developing city of Muleshoe, which in 1914 established its school. Old-timers know this. Young people and newcomers like me don’t. We have heard of places like Baileyboro, Circle Back, Bula, and others around Muleshoe, but so what? Once thriving little farming communities with a school and stores, cotton gins, grain elevators, most of these places don’t exist anymore. And most of their downfalls began when, over time, their schools had to close and/or consolidate with other schools as their student enrollments dwindled and the school and its community faded away.

Schools, in case you had not noticed, are the lifeblood of any town, the center of events, the focus of day to day life, the pride of the community. This is especially true of small communities, and in the beginning there were many small towns springing up as gathering places for families of farmers and ranchers and their work hands spread out in the countryside around Muleshoe. Those families had childen who needed to go to school. So schools magically appeared where they were needed to serve those kids. But as time marched on, progress reared its ugly head and things changed, sometimes with less than positive effects. It was then that those schools and their communities, not so magically, disappeared.

This topic I did try to research, with varying degrees of success, but I will share with you what I learned. Or tried to learn! My brain has been suffering from information overload since I took on this project and some of what you read here may not match what you think is correct history, but I did my best to get it right. So here goes.

My husband Bill took me on a road trip Thursday afternoon to visit all the locations where schools and communities used to be. We drove probably 120 or more miles in the four hours it took to visit just the locations in the south of Bailey County where most of the more active schools had been and which were the ones I was able to find the most information about. I suspect you can’t read all the locations marked in yellow, but it will give you some idea of how spread out the schools were. We focused on the schools from the area south of Needmore, and I think you can make out Needmore at the intersection of Highways 214 and 298. And Needmore, interestingly enough, was one of the few communities that didn’t have their own school, but sent their kids to the one closest to them, maybe Circle Back, Longview, or Baileyboro. 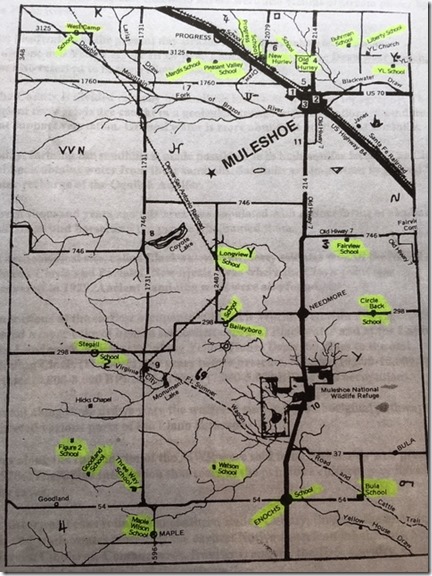 I couldn’t help but wonder how the landscape we saw might have looked to those brave, adventuresome souls lured out here by northern land investors and who settled all this land and started all those schools and towns that no longer exist. I would guess it looked very much like it does today, flat, wide-open, and full of promise. 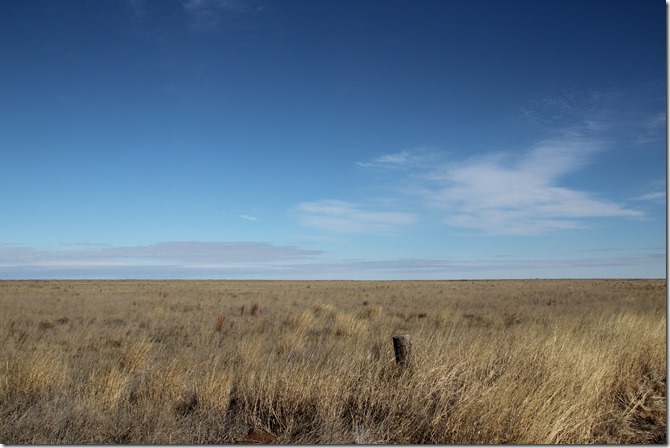 Nine schools used to be in north Bailey County. Pleasant Valley and Buhrman schools didn’t show up in my sources, but they did exist and I have to think that over time those students wound up in Muleshoe or Farwell schools. I’m not sure when  YL School was started, but it lasted until 1947 when it consolidated with Muleshoe. West Camp School appeared in 1913, with most of their students probably going to Farwell after it closed. Liberty School was formed in 1913, and I found nothing about its demise. Progress had a school in 1908, consolidating with Muleshoe in 1946.

According to an article in the Tails and Trails of Bailey County history book, pages 35-36, Old Hurley was actually the first so-called town in Bailey County with the Bailey County school district centered there in 1908. The first school in the county was given the name Mardis, which shows up on this map. The town lost its charter when the Fairview Land and Cattle Company gained a charter they had set up three miles west of the original Hurley. Old Hurley died as a result and their school consolidated with Muleshoe in 1921. Somewhere in all of that, New Hurley appeared along with its school in 1913, but I found no record of when it ended.

The Fairview school began in 1924. Around 1933 their high school students were bused to Muleshoe, and in 1944 the grade-school age children followed, which is most likely when the school closed down. It was not uncommon back then for the elementary grades to be taught at the small school and when students reached high school, they would be sent to a neighboring larger school with more teachers and greater selection of classes.

Circle Back School started in 1910, and being located on the west end of Highway 298, kids would have a shorter distance to go to school if they consolidated with Sudan rather than Muleshoe, so that’s what they did in 1957. Longview School was built in 1925 and consolidated with Muleshoe in 1944. Stegall opened its school in 1924 and eventually sent its students to Three-Way School, but I did not find a date for that. That one room school house from Stegall, by the way, is on display at the Muleshoe Heritage Center and is an appropriate piece of Muleshoe history.

In 1921 Baileyboro started a school and then in 1923 Baileyboro obtained a charter for a school district after having an argument over it being a common or independent district. The independent district won, and students from other high schools came there from time to time. But financial woes developed, and eventually the high school students were sent to Bula and Muleshoe, consolidating with Muleshoe in 1946.

I found more information on the schools in the south end of Bailey County, and for the most part, those schools and the ones in the middle of Bailey County started later than those in the north, most likely because the land in the south was populated at a later date as people moved into the area. The Figure 2 school, which, according to Frances Stegall in her book Grass Roots, is often forgotten or overlooked, was one of the first schools in that area of Bailey County in 1923 and later consolidated with Goodland, which opened at about the same time. Later that consolidation closed and the kids went to the newly organized Three-Way School in 1945, built in a central location for the purpose of serving students from those schools, later also taking in students from Maple Wilson, which had started sometime before 1929, and Watson School which had been around since 1924.

Which brings us to Enochs and Bula. The community of Enochs developed on land donated by I.C. Enochs sometime before 1925, I think, and a school is mentioned. About that same time Bula students were going to school in a vacant building in Bula, and then in 1925 kids from both schools were meeting at the Enochs school. In 1926 it was decided to build a new school halfway between these two communities, and the new Bula school was built for them. Students went there until 1975 when the school had to close and consolidate with the Three-Way  school which had already absorbed students from Figure 2, Goodland, Watson, Maple Wilson, and Stegall.

Ruins of the abandoned Bula school built between Bula and Enoch are still standing. I suspect it was state of the art when school was in session. 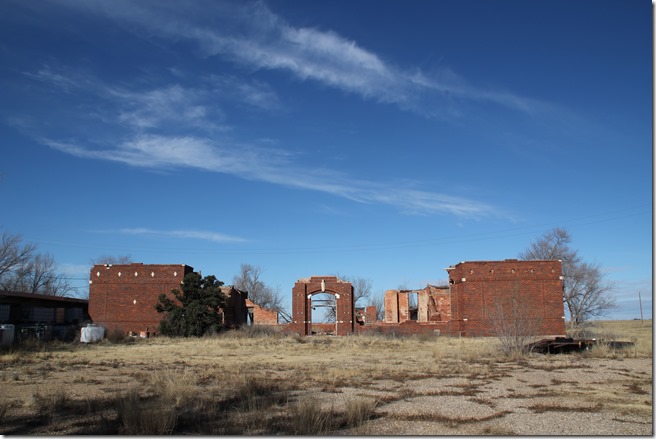 The name Bula had been in a glass panel above the main entrance. J.E. and Wanda Layton made sure that was preserved by making this monument with it and placing it by the windmill that was already in the Enochs cemetery, where they both can be found today. 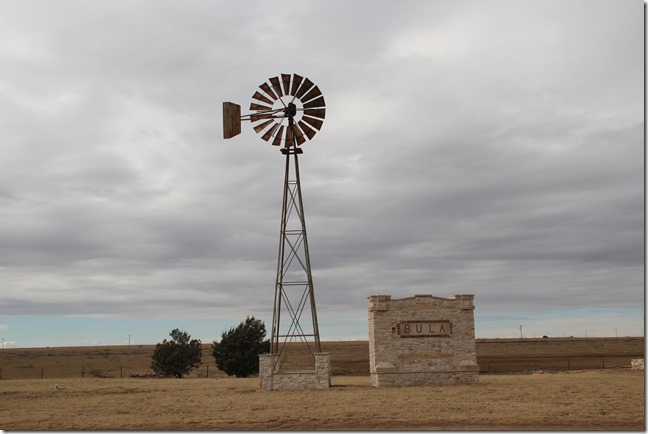 Of all the schools, Bula was the one with a history of its students preserved in display form. It fell to Jim Pat Claunch to be the keeper of those records, and last year he asked and was granted permission to put these pictures in the Oneita Wagnon Senior Center in Muleshoe. You will see some familiar faces in those senior pictures. You might even find Jim Pat! 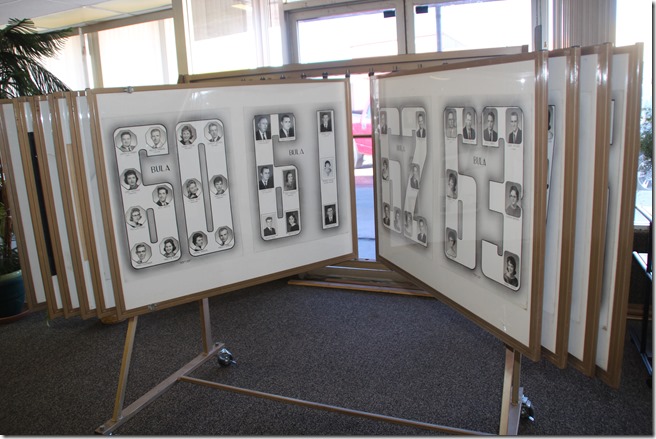 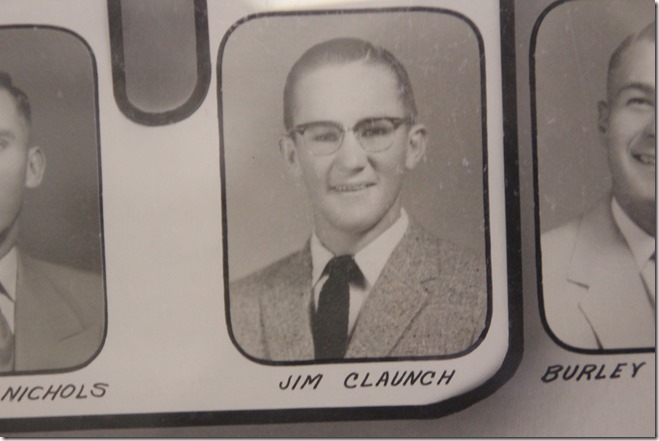 Remember my comment about a school being the epicenter of any town, large or small? This consolidation between Bula and Three-Way was a hard pill to swallow for those who had been rooting against each other in athletic events all those years, and now were on the same team! I guess time softened the animosity, and they all learned to live together.

Until 2002, that is, when Three-Way had to deal with the same loss of students and closed its doors. The school consolidated with Sudan, but students were given the option of attending school in Sudan, Muleshoe, Morton, or Whiteface. Three-Way School was not connected to a town or community, remember, but was built in a central location between the schools sort of in a corner of Highways 1731 and 54. All that is left is the foundation and the bus barn, which Sudan still uses for the bus that picks up the three or four kids who still make the trip to Sudan for school now. 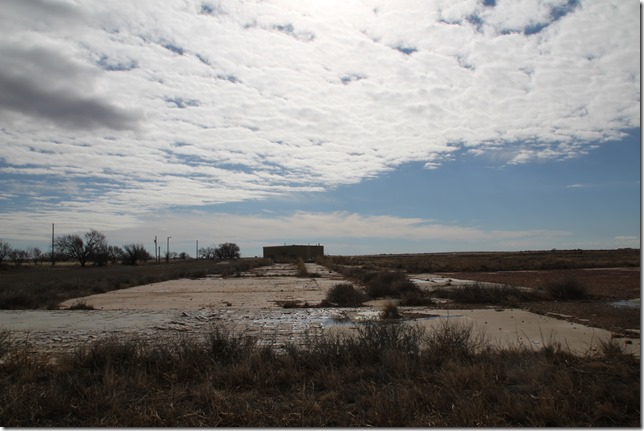 As I mentioned earlier, Muleshoe schools started in 1914, about the same time many of these little campuses were thriving out in the country. But as the little schools slowly died, the town of Muleshoe and its school system grew and picked up many of the country students. I also found in my research that in 1967 the  Hilltop School, originally for the African-American students, closed and those students were integrated into Muleshoe ISD.

As we drove around that day, we passed sad forgotten little houses, vacant store buildings, deserted clusters of what was once a thriving neighborhood with commerce and activity. Except for Bula and Three-Way, no evidence remained of the schools that once existed. What happened? Where did everyone go?

That evil and unavoidable demon, progress, is what happened. And where everyone went was off to live somewhere else. There is no one fatal cause we can blame, but there is perhaps cause and effect. The Crop Rotation Program, CRP, was concocted to lower production and raise the price of crops, but if there are fewer crops growing, then there are fewer field hands and workers needed to help grow those crops, fewer gins and elevators to receive those crops, which means fewer jobs for the people living in those farming communities, which means they move away to find another job and take their school-age children with them. Advanced technology gave the farmers more efficient tractors and irrigation systems to work with, which also means fewer farm hands to hire. The dad who created the successful farm dies, the children choose not to continue the family farm, and move away. These and myriad other factors left small communities to wither and die. 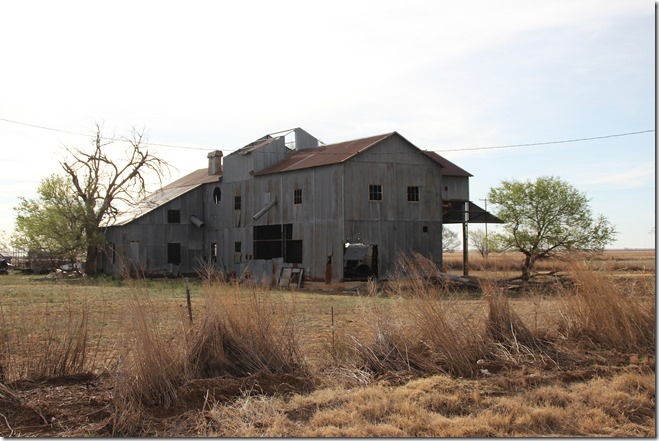 But the interesting, quaint names of those schools and their communities live on in the memories of the students who walked those halls, received a good education, and went on to lead productive grown-up lives.

My thanks to Jim Pat and Suzie Claunch, Bill Liles, Chris Locke, Christy Anderson, Dana Rasco, June Gore, Dennis Turney, and Wanda and Lewis Wayne Shafer for their help with this article.