The Doctor is In

A common refrain starting many a conversation with Dr. Bruce Purdy these days goes something like this: “I hear you may be retiring soon. Anything to that?”

The answer is always a no.

Since 1977, Bruce Purdy has been treating patients, manning the rotating Muleshoe emergency rooms, fighting the good fight to keep a hospital open in Muleshoe,  doing what needs to be done to provide medical care in this overlooked little town, and loving every minute of it. 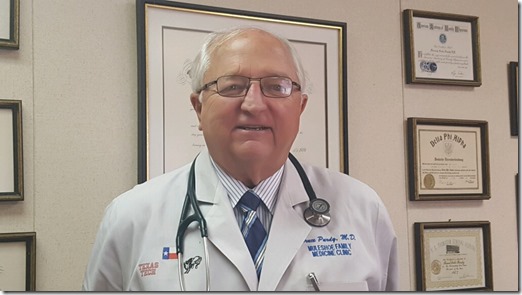 Well, most of it. In 1984 when the Muleshoe hospital had major problems and a California chain was brought in to run the hospital and get it back on its feet, the bandages hit the fan. Things did not go well, which is another whole story. The California bunch was run out of town, and eventually the hospital was closed. In the meantime, Dr. Purdy and Dr. Homer Allgood rotated nights on call and kept Dr. Purdy’s clinic open after hours so the area would have an emergency room. Dr. Purdy sent his patients in need of hospital care to the Amherst hospital and for about a year and a half drove over to Amherst  to check their progress and deliver babies. In 1987 when Texas Monthly ran an article about the situation, the hospital was still not open. That was a while back, and the final date remembered for the reopening of the hospital was late 1987 or early 1988. According to Judge Corky Green, who was also instrumental in dealing with the legal issues required to get the hospital open said without Dr. Purdy’s help it would never have happened. Somewhere in there the community also rose to the occasion and took it upon themselves to show up , tools in hand to paint, clean, decorate, repair, and get the hospital in working order for the people of Muleshoe.

So how did Dr. Purdy become the warrior in all this crisis? A Muleshoe product, he graduated from Muleshoe High School in 1967, excelling in and enjoying the sciences: chemistry, biology, all the subjects students needed to master to do well in medical school. He also played football. Dr. Charlie Pummill was his mentor and encouraged him to follow his passion and use it and his knowledge in medical school.  But first he ended up with a degree in chemistry and  a minor in biology from Texas Tech University. 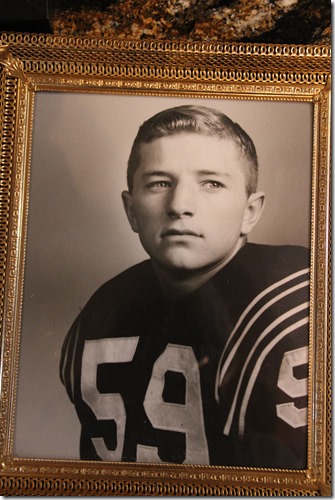 Back in those days some students went straight into medical school and never even earned an undergraduate degree and just took the MCAT. Bruce said it was hard getting into med school, a country boy from Muleshoe and all, but he earned that B.S. degree and then took the MCAT, scored well, and was assigned to the University of Texas Medical Branch in Galveston, which just happens to be the oldest medical school in Texas. I asked why that particular med school; he shrugged and smiled and said you apply and you go where they send you.

And being assigned to far-off Galveston had its perks. Seems that a fraternity brother in Galveston set up a blind date for Bruce with a girl who was teaching school with his girl friend, and guess who that just happened to be? After dating Cindy for two years, they married in 1976 and have enjoyed 42 years together.

He and Cindy served his residency in El Paso for one year at R.E. Thomason General Hospital, a part of the Texas Tech Medical School system, and in 1977 they moved to Muleshoe. He had his own practice in an office at the end of the hospital, the old house on the south side. At that time five other doctors were here: Drs. Pummill, Allgood, Gregory, Albertson, and Sayago, and the work load was perhaps not quite so heavy.

In 1982 he built his current office, the one that served as an ER when the hospital was closed and now meets the needs of those generations of families he has come to know. 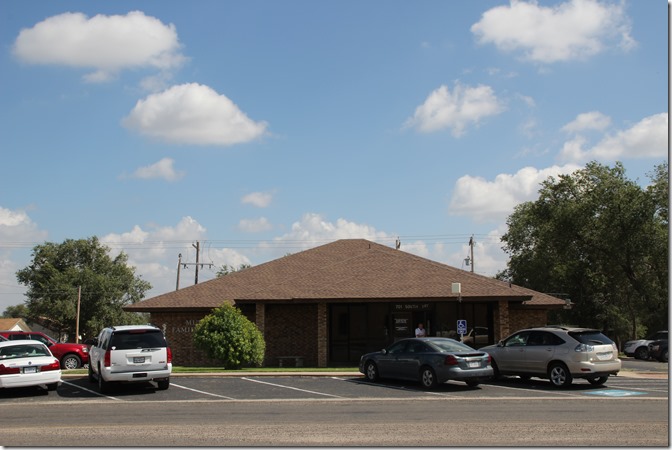 After moving to Muleshoe, sons Aaron, Derek, and Tyson completed the family and Bruce and Cindy both agree that Muleshoe has been a good place to raise their sons and get involved in community activities. Besides being the busy town doctor, Bruce coached kids’ baseball, became actively involved in church, and was heavily committed to Boy Scouts, all three of his sons earning the rank of Eagle Scout. In fact, while Bruce was scout leader, they achieved a South Plains record of ten boys reaching Eagle Scout status in the same year. Bruce was also honored with the Silver Beaver award, the highest adult leader designation. 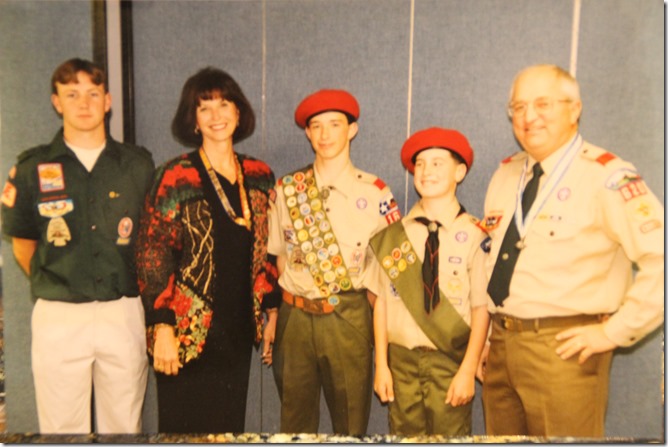 Aaron and Tyson followed in Dad’s footsteps and became doctors. Tyson and his family live in Lubbock where he practices family medicine, and Aaron and his family live in Graham, Texas, and he also practices family medicine and delivers babies in nearby Olney. Derek followed a different passion and became a top motorcycle technician for American Eagle Harley-Davidson in Dallas. Bruce and Cindy also enjoy their five grandchildren. 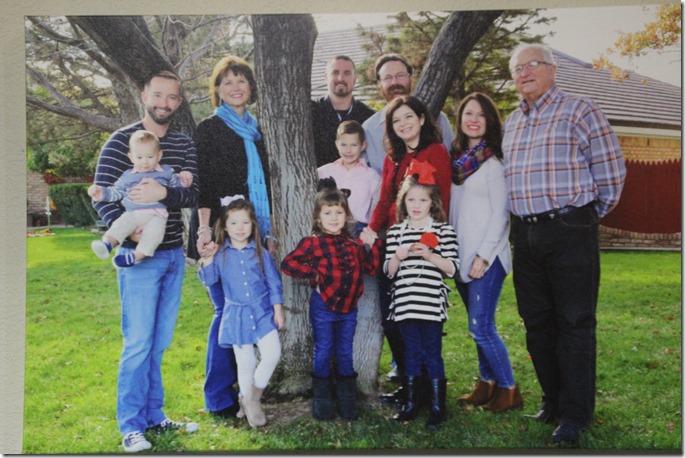 I found out in the course of our conversation that for five years in the early days Dr. Purdy would drive home on the weekends from Tech to work for Gary Miller, learning how to fly and  eventually spraying crops. He has kept his pilot license current even though his last flight from Muleshoe to somewhere was while he was in med school. I didn’t realize being a pilot was on his list of accomplishments.

Something I did know, however, were his adventures hunting big game in Africa a few years ago. Bruce hunted birds and deer as a kid and enjoyed it. Then friend and business accountant Paul Anderson took him to a Dallas Safari Club meeting which fueled his desire to see other parts of the world and fit right in with his hunting background. In 2005 they hunted in South Africa, and five years later went after Cape buffalo in Tanzania. Both trips involved photo safaris as well, and he still has friends he made in Africa that he stays in contact with. One of the many beautiful animals he brought home is this greater Kudu from South Africa. 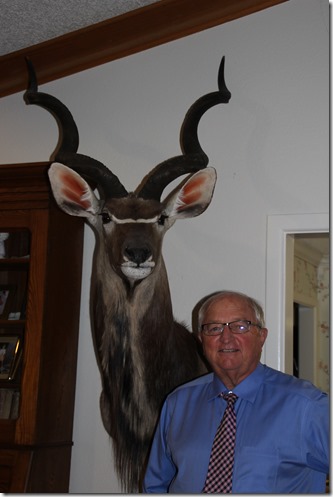 Now since it happens that I went on a trip to Tanzania to climb Mount Kilimanjaro, when I go in for my yearly physical the subject of Africa seems to always come up and we talk. And visiting with patients seems to be his one weakness at the office. Working with and getting to know his patients is one of the main satisfactions of putting on that doctor uniform, as Cindy calls it. Over the years treating and getting to know the different generations of the families he started business with is the fun part. He has probably delivered up to three thousand babies for 32 years, so some of those generations he brought into the world. 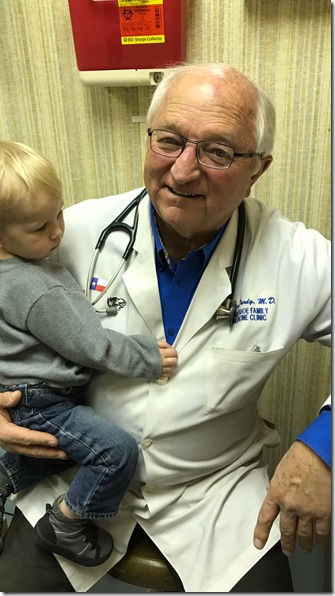 Dr. Purdy with one of those patients of the current generation, Lincoln Bomer, grandson of Bob and Lana Bomer and son of Robbie and Victoria Bomer. Photo courtesy of Cindy Purdy

Bruce said he started school knowing Spanish but also took Spanish in high school and college, and being bilingual has served him well here in Muleshoe, allowing him to communicate easily with all his patients. It is interesting to hear him as he enters the examining room when he greets some patients in Spanish and the lively conversation continues as the door closes. Because of his positive experiences with two languages, he firmly believes all Texans need to know both English and Spanish, regardless of what their native tongue happens to be.

I asked him if he could name the most unusual disease or condition he has seen come through the clinic, and he said African tick fever-which I didn’t bring back, by the way-and then he said that was the thing about medicine in a small town. You never know what will come through the door and it is interesting and always a challenge to ask the right questions to find out what’s wrong, and if you don’t ask the right question, you miss what you are looking for.

Dr. Purdy focuses on preventative medicine and urges patients to have yearly physicals so that if something is wrong, he will find it and then work to fix it. In the old days he would see anywhere from 80-90 patients a day. Now it is about 30-40 a day, still a large work load. He lamented that electronic medical records and the insurance industry have actually slowed down seeing patients because so much more information is expected to be recorded. It has been helpful, however, to find information about medicines and their side effects and interactions with other drugs on his cell phone; it is immediate and right there at his fingertips.

Corky Green described Dr. Purdy as the kind of doctor who follows up and checks closely on his patients, like he did that year and a half when the hospital was closed and he drove to Amherst to monitor their progress, unlike some doctors who simply go home after the office closes and don’t want any complicated cases. And to this Bruce would respond that he doesn’t do it for this kind of praise, but for the satisfaction of a job well done. And to that Cindy would respond that he is a perfectionist when in doctor mode. Medicine is his passion.

Which may answer those questions he seems to keep getting about retiring. He said to me, “I would feel lost without it,” meaning being a doctor with all the perks and problems that come with the job.

He’s here for the long haul. 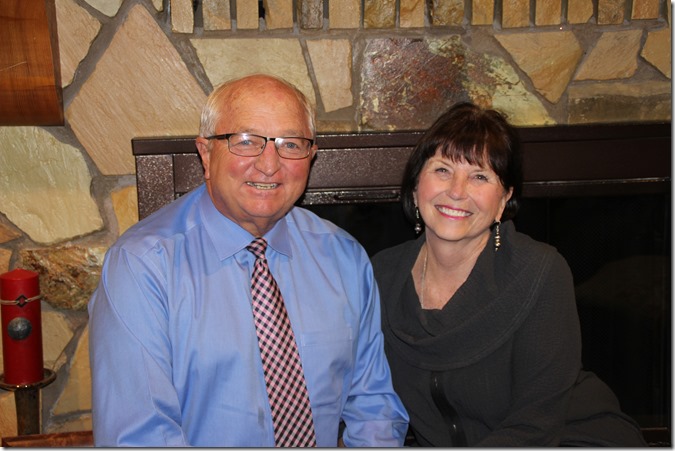 Thank goodness! My physical is scheduled for December.

Thanks to Lela Ann Smith, Corky Green, and Eileen Morton for helping with this story, and to Bruce and Cindy for sharing their life with me.