In 2012 our Methodist church made history. Well, our new pastor, Mindy McLanahan, did when she became the first female pastor in our little town. 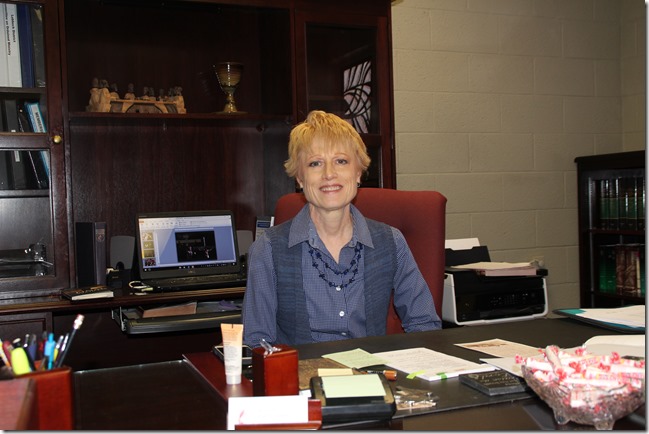 The chance to break that particular glass ceiling was a long time coming, but dealing with the ceiling wasn’t necessarily her intent; simply becoming a pastor was what she felt God was calling her to do. So she did.

Mindy grew up in Canadian, Texas, where, as a child, she felt God’s nudging, but didn’t see responding as an option then. She grew up in an independent Christian church, similar to a Church of Christ but with musical instruments, and women in the ministry was not part of their doctrine or the local culture. So while God’s call was not answered immediately, the desire remained.

In the meantime, Mindy graduated from West Texas State University, taught third grade in Canadian, married Ronnie Evans in the Higgins, Texas, Methodist Church, which she joined and where she encountered a different mindset of women and preaching.

While Mindy was still married, she took a Walk to Emmaus, and God’s voice came to her again. She began to explore the possibility of following her heart into the ministry. Her husband didn’t have quite the same vision and couldn’t see himself as the minister’s spouse, and they agreed to divorce.

After several years of healing and soul-searching, Mindy acknowledged God’s call that she had put on hold and entered Asbury Theological Seminary in Wilmore, Kentucky. Asbury is not a Methodist institution, but many Methodist preachers study there because it tends to reflect the more conservative climate found in West Texas. It didn’t hurt that the Canadian Methodist Church just happened to own a house there, that her sister lived in Ohio-a short three hour drive from the seminary, and things just fell into place, guided by that unseen spirit that makes things happen, and at Asbury she studied for the next three and a half years.

After her ordination, her first appointment took her to Grace UMC in Abilene for a year. Next she went to Miami,Texas, for seven years, and then she came to us in Muleshoe. As might be expected, initial reaction to the idea of having a woman preacher was mixed. The congregation welcomed her warmly even though I suspect for some the verdict was out until Mindy had a chance to prove herself behind the pulpit. Well, that’s not entirely true. At 5’1’’, even with the aid of a box to stand on, the pulpit loomed large, and eventually she migrated to the front of the altar area to deliver many of her messages behind a music stand. She has given her sermons with sincerity, humor, and an abiding faith in the God that brought her here, and earned the respect of the congregation. 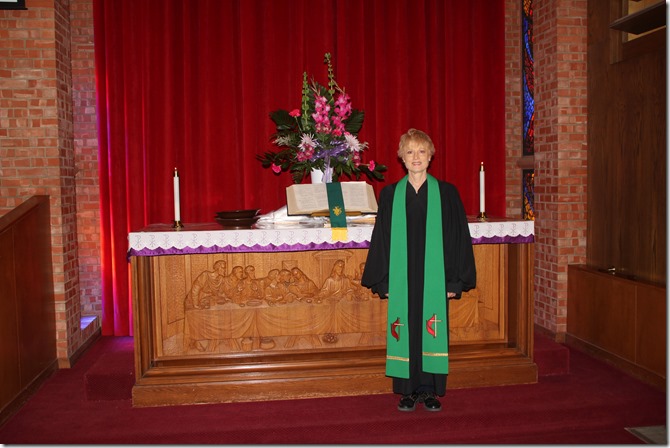 Are there difficulties that come with being a female in a male-dominated field, I asked, and said she perhaps not having a family made it a bit harder to socialize, since children and a husband broaden the playing field. She felt that barrier more in Miami because there just weren’t as many opportunities for social interaction. But she said any pastor might have a problem with social alienation simply because people are sometimes uncomfortable around preachers, fearing they might do something to offend the pastor, preachers being people of God and all. And sometimes having friends in the congregation comes across as playing favorites, which can lead to resentment. She said people here are more relaxed around her and less inclined to worry about coming across as sinful people in her presence. I think her sense of humor puts people at ease and when we have gatherings, she always blends in nicely.

So, what’s the good part about being the preacher? Seeing God work in people’s lives was her quick answer. She smiled and added that she also enjoys writing the sermons more than preaching them. Writing the sermon becomes her intimate time with God, and she feels close to him. She laughed and said that after the sermon is finished, then it is time to pray for God to help her deliver it!

If you happen to be up early enough in the mornings, you might get a glimpse of her diminutive form gliding down the path in the new city park. Continuing a practice she fell into when teaching in Canadian, Mindy runs anywhere from 45 minutes to 4 miles a day, which she enjoys. Originally something of a social activity, she has continued to run to stay healthy, and she feels it helps keep her mentally sharp and emotionally stable. Running also provides a quiet time of meditation, a good thing for anyone, but perhaps very helpful for someone like a preacher always in search of just the right words or ideas to share on Sunday morning.

Mindy’s other interests include playing the guitar and reading fiction books that focus on strong characters as well as books that will help her grow as a person and help her see and appreciate how we relate to one another, like the books of sociology professor Brene Brown, one of her favorite authors.

Apparently she has been successful enough as a woman pastor that leaders in our Northwest Texas Conference have taken notice and have seen fit to move her to a new position as Assistant Director of Missions and Administration. She is still our preacher, but will assume her new position full-time on May 1st in her office at the Northwest Texas Conference Service Center on Avenue M in Lubbock. We will have a new full-time preacher in June. Her new duties will require her to help equip local congregations in guiding their ministries and to provide resources, training, and informational support as the role of churches in today’s society continues to change.

We are sorry to see her go, but wish her well with her new responsibilities. 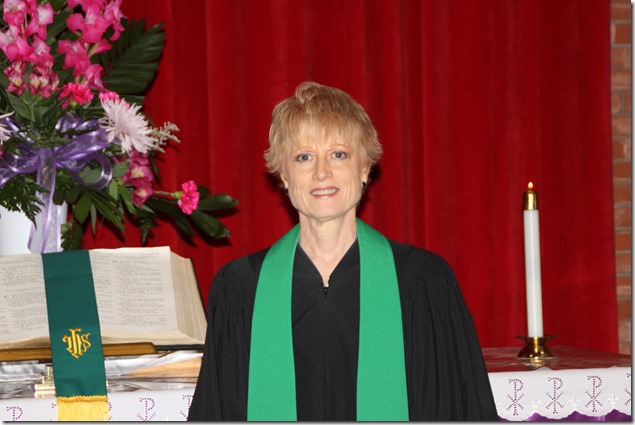 The Lord will be with you, Mindy.

And thank you for helping Him to be with us.