I shared with you the story of Daisy, the stray cat who recently came to live with us (“Say Hello to Daisy,” August 14, 2016). Daisy is a young cat, the youngest of our bunch. Perla and Minnie cared nothing about playing with her; Siam was still settling into her new home and at the time was not going outside. I made the comment that it seems unfair for a kitten, meaning Daisy, not to have another kitten to play with.

The seed was planted. I started checking the classifieds in the Lubbock and Clovis papers for kittens to give away and mentioned looking for a kitten to daughter Caroline. And wouldn’t you know it-her hairdresser just happened to have three motherless kittens she was bottle-feeding. Now, with Caroline, kittens in need of a home are a first priority, so it was a done deal.

After we got home from Thanksgiving with AJ and family and the kitten had had a little more time to grow, she was delivered to our door. Tiny. Just barely five weeks old, if that much. 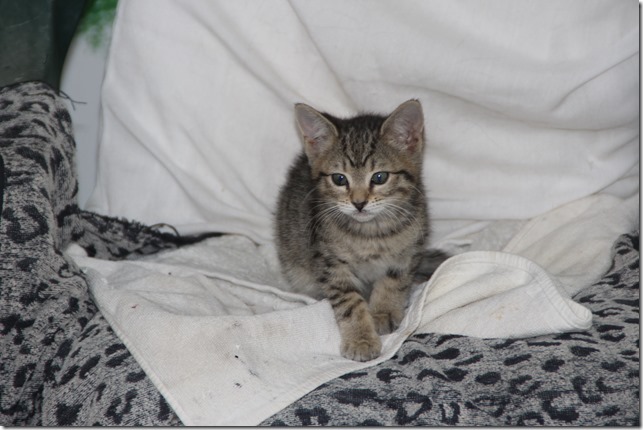 The first few days she was with us, she spent her nights in the barn in Porche’s big dog kennel, along with food, water and a small litter box. During the day I let her out in the barn, which was to be her home and where the other cats also stay so she could meet them. Daisy, the whole reason the baby came to live with us, watched with a skeptical eye. Who was this little interloper, anyway? And whose idea was it to let her live here in the first place? Never mind that Daisy had been that same interloper herself just a few months ago, and Minnie had not been happy with her arrival, either. But I noticed that Daisy many times positioned herself next to the kennel as if she was supposed to watch over the newcomer. 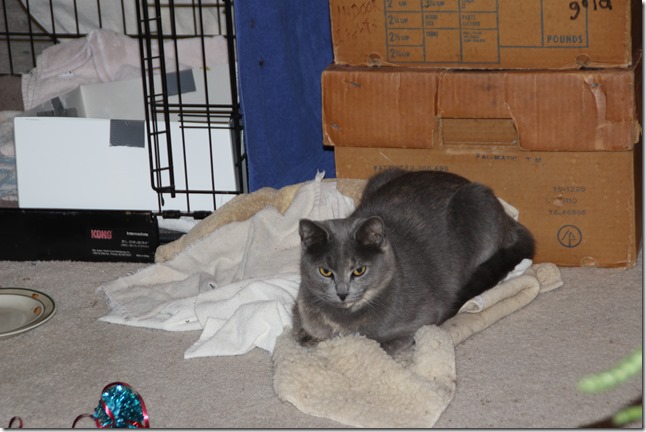 After a few days when I felt like the kitten knew this was her new home and she had met all the cats and both dogs, I didn’t keep her in the kennel at night. She was free to roam the entire barn and play at will. And play she did. Constant motion. I tried in vain to get good pictures of her doing her acrobatics, leaping from chair to floor to box and back again, chasing toys, climbing over dish gardens and cactus with total disregard for plants or spines, and learning that if she stepped on the treadmill when I was walking on it, it would carry her to the end and lightly pitch her off and into the wall behind it. She rode it more than once; I think it was a thrill ride for her! 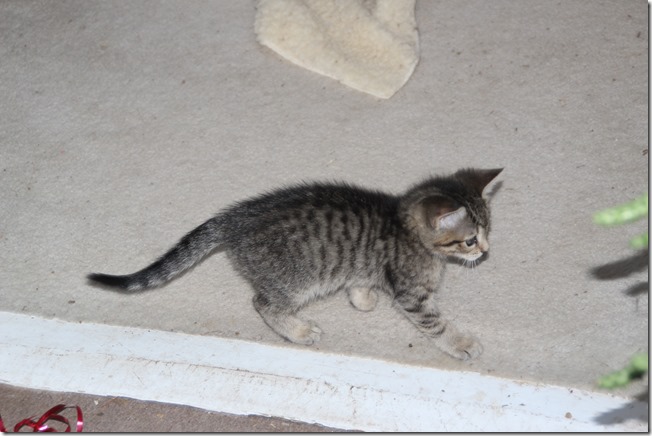 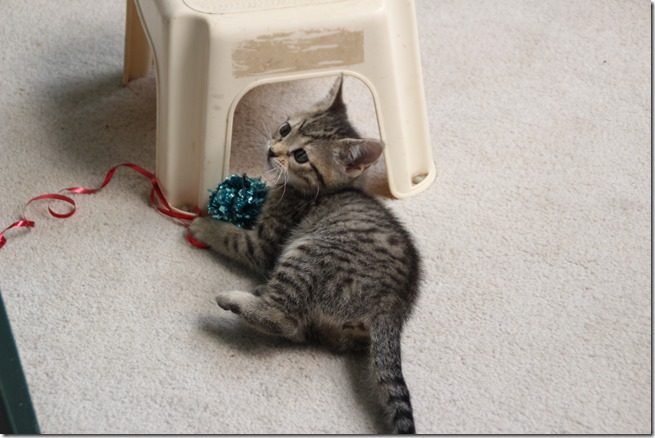 We haven’t had a tiny kitten in a very long time, and I had forgotten the curiosity and sheer joy of movement and energy they delight in as they cavort with innocent abandon. I had also forgotten how much fun they are to watch as they play. 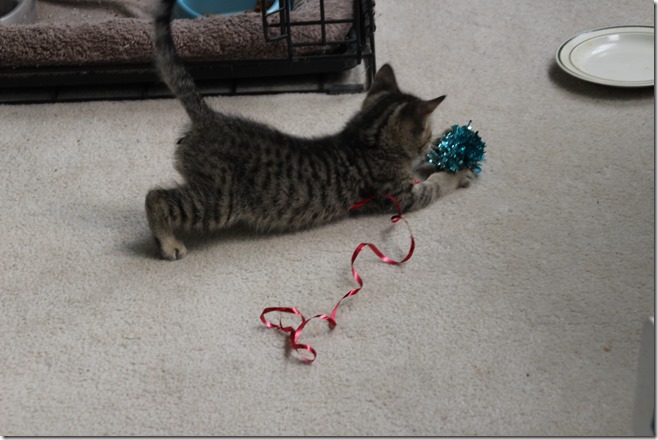 The real fun, however, came when she played with her new best friend, Mari. Porche wasn’t so sure about this little dynamo; Mari, on the other hand, was curious and delighted to play with this new ball of fur. Mari would let the kitten play with her tail, bite on her one and only back leg, jump in her face; nothing was off-limits. They also discovered hide and seek on the cat scratching post, the post that was never really used for a scratching post, but was great fun to climb and hide in. Mari’s patience never seemed to wane, and after playing, I would see lots of rubbing and loving going on. 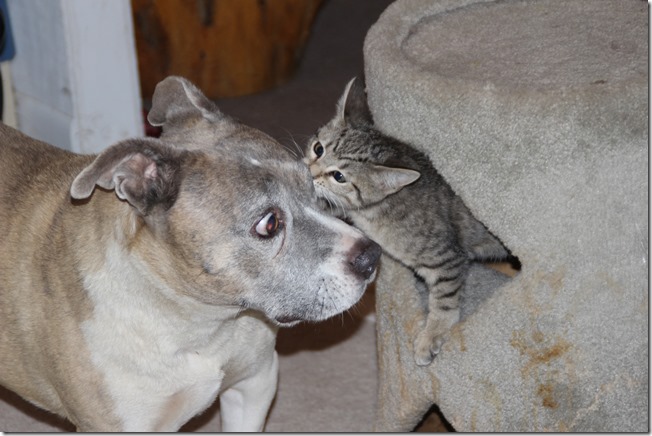 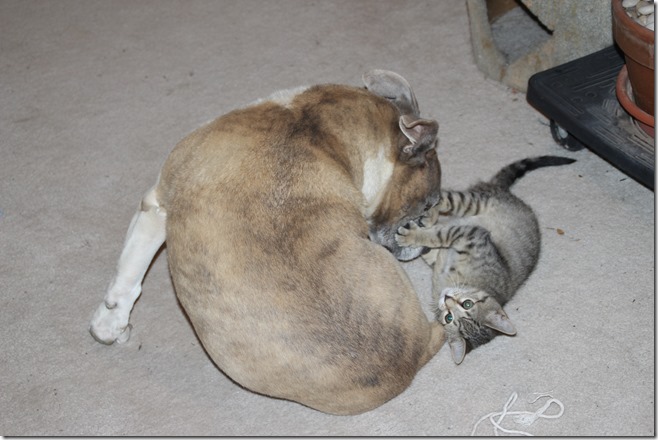 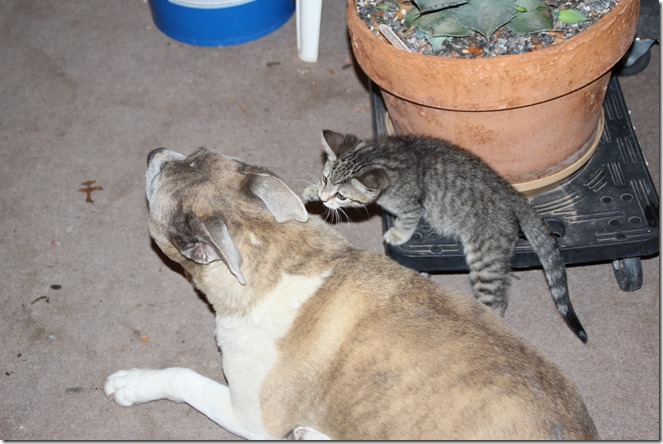 The weather finally warmed up, and I took her outside with me. Well! Outside the possibilities were endless for things to climb and places to explore. I had a hard time getting the pictures I really wanted, so I settled for these. 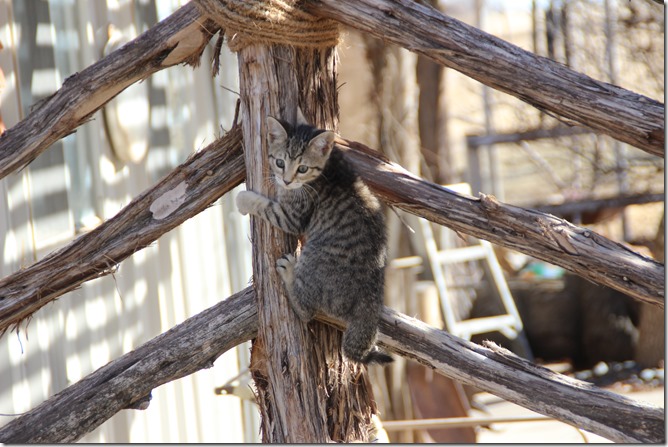 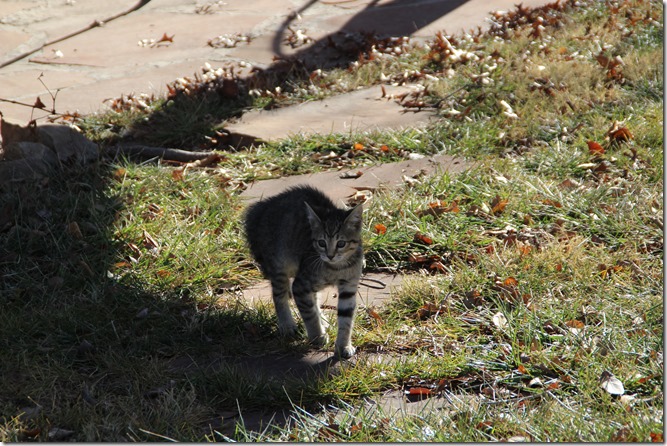 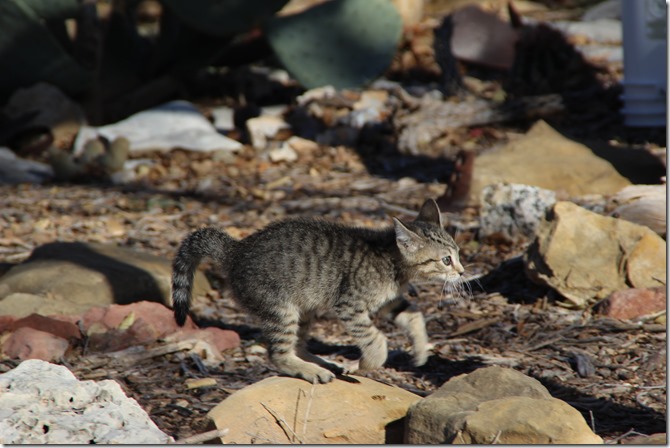 Time has passed, and the kitten has mastered going in and out the barn’s pet door, so the great outdoors is hers to enjoy anytime she pleases. Daisy has now decided that she might as well get in on some of that play time. I chased them around with the camera one afternoon and never was quick enough to get a good shot of them playing, so you will have to take my word for it that they are friends and now play, too, which was the whole point in the first place. But it had to be Daisy’s idea, not mine. You know how cats and kids are about things like that. The kitten also pesters and follows Daisy everywhere, like the afternoon I heard this pitiful little scared meow and  discovered  Daisy and the baby both up on top of the pergola. Guess which one was scared to come down. She has gotten over that now and does and goes anywhere she wants to, including into the garage and taking over the cat bed and heat lamp usually occupied by Minnie.

You might have noticed I kept referring to her as the kitten. I was saving her name for last because we had her for about  a month and couldn’t decide on a name. I thought of Katniss as I watched The Hunger Games while walking the treadmill, as this kitten was definitely a girl on fire. I thought of Jordan because she jumped and flew through the air like Michael Jordan. I came up with others, but nothing seemed to fit, and Bill shot them all down anyway, which kind of made it hard to stick with one of the early choices. And as we were outside on one of those warmer days playing, the wind picked up considerably, and he came up with Wendy. And for whatever reason, that one seemed to fit, so that’s her name. Without meaning to, I will probably call her Wember more often than not, a throwback to my teaching days when I had the Green twins, Amber and Wendy, in the same class and would invariably Jabberwocky their names into Andy and Wember. But that’s another story.

We made the trip to Muleshoe Animal Clinic for her first round of shots right after she came to us. Jesus, who has worked at the clinic for as long as I can remember and who has seen all my animals come and go through the years, appeared at the exam room door. He stood there quietly, hands in his pockets, a very slight smile in one corner of his mouth. He looked at that baby, looked at me, and simply said, “Another cat?” 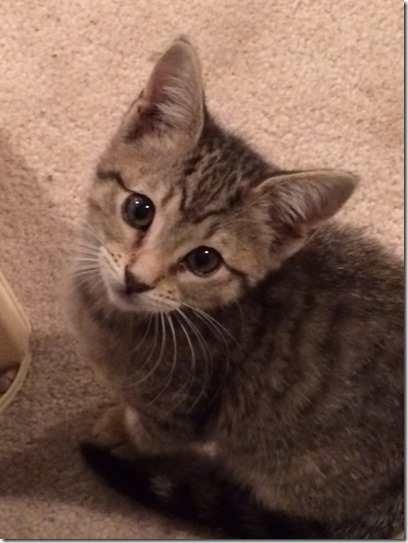 And without a doubt, not the last.