Where Have All the Good Songs Gone?

I enjoyed the Trinity Christian Center Church Christmas concert Friday, delightfully performed by a host of singers led by pastor Reydon Stanford  They have done this concert for the last 17 years, spreading Christmas cheer and accepting a love offering to be donated to Muleshoe’s Meals on Wheels program. (Read more at Christmas in the Country Concert, December 15, 2015.) This year the concert raised $5600, bringing the total Meals on Wheels contribution to close to $80,000 over those 17 years of singing.

The concert always comes at Christmas, so naturally, traditional Christmas carols and spiritual songs as well as some seasonal pop music favorites are shared with the audience, 14 selections in all.  I especially enjoyed O Holy Night, Mary Did You Know, and then Silent Night, which we were invited to sing a cappella with those on stage. And the playlist included Blue Christmas and Carol of the Bells, two of my personal favorites.

After a short intermission, Reydon shared that some of the members of the choir had wanted to do something a little different this year, 17 years of Christmas songs being, well, a lot of Christmas songs, so it was decided to take a trip down memory lane with some well-known hits from the 60s and 70s, two decades when classic rock ‘n roll was evolving and maturing. And two decades of music I happen to have lived through and enjoyed very much. So-for the rest of what I am going to say, be prepared for the generation gap to rear its opinionated head. But you knew that was coming, right?

Reydon led his talented singers through 14 easily recognizable songs, well, except for that one Fleetwood Mac single that I thought was pretty obscure, and without being told to do so, the audience automatically sang along, savoring the words and melodies that went with the memories rekindled by the songs. All the selections were good; Hey Jude, well done by Alyssa Stanford, was a hit, and Proud Mary, covered by Heather Garcia, brought the house down. 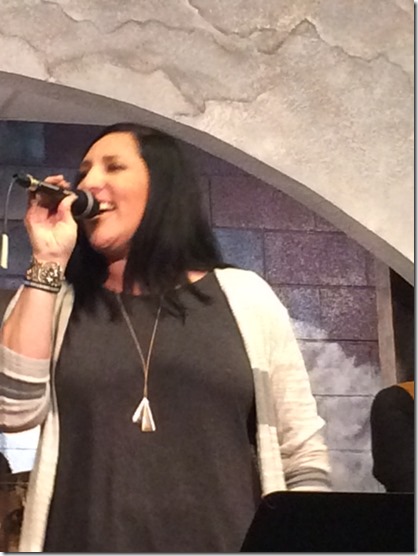 Now, when an audience happily chimes in-and actually know the words!-this just has to be a sign of good music, music that speaks to a person, that leaves an impression, music worth singing!  I’m a Believer; Close to You; Sweet Home Alabama – all these songs had the audience filling in as back-up singers.

So, I ask you, what songs are the kids of today going to want to sing when they become adults? What songs will they even know the words to or be willing to actually say out loud, let along be able to follow a discernable melody? Maybe Happy by Pharrell Williams.

I’ll admit it-I know the majority of the audience that night were older, like me, who grew up with these songs, and we obviously will cry out in disgust over hip-hop and rap music-an oxymoron if I ever heard one- and some of the other tripe masquerading as music right now. I have tried to listen to some of the music from the 90s to today, trying really hard to give it a chance and find something of value out there. Apparently if you make it outrageous enough, vulgar enough, scream enough, and cover the lyrics with too much bass, or have a whiny voice that meanders all over the place with whiney lyrics that never find a melody, someone calls it music, and the kids who have had that music drummed into their heads accept it as music.  A classic case of the Emperor’s New Clothes. I think I have used that analogy before, but it fits. I mean, come on, Adele may have a good voice, but even she just screams a lot. There are still some good blues singers out there, but even some of that genre is getting overrun with guitar riffs that just go on and on and on. Even Country music now sounds pretty much all the same and more like bland pop than real country.

Music, like literature, reflects the society and culture in which it exists. Generation gaps are a result of those changes that inevitably occur over time. Our kids are dealing with a totally different society than what I experienced, so I am ready for some positive changes that will have a positive impact on the quality of their popular music.

And yes, I also know that the generation gaps of the past said the same thing about rock and roll, and parents gnashed their teeth and rolled their eyes just like I am doing now. So I suspect that history will prove me wrong, that kids of this generation will indeed find something they can remember and sing along with when they get gray and wrinkled. But I also suspect some of the songs that continue to be sung along with, even by today’s kids, will be classics from the 60s and 70s. That’s what happens to truly quality music; it remains viable for all generations.

But I can’t imagine that the current crop of songs will be nearly as much fun to sing along with as Fun, Fun, Fun by the Beach Boys was last Friday night.

Thanks, Reydon and crew.