Today we ventured up Pikes Peak, one of the main reasons we came to Colorado Springs in the first place. We also learned that it wouldn’t have killed us to put at least one of our watches-or the clock in the car- on Mountain Time because we showed up for the train ride up the mountain a full hour ahead of time since we stayed on Texas time and I didn’t bother to check the phone, which did change to Mountain Time! So I looked at every single thing in the gift shop before our train came down. 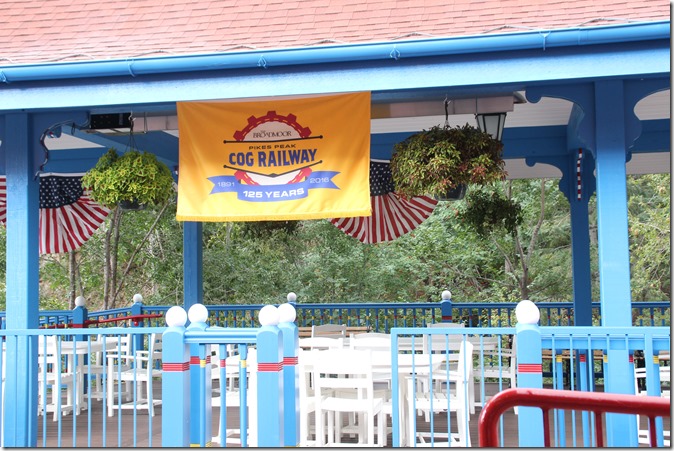 Finally it was our turn. Up we went. I tried to take some  pictures, most of which didn’t turn out well, what with train movement and a camera that insisted on not cooperating. 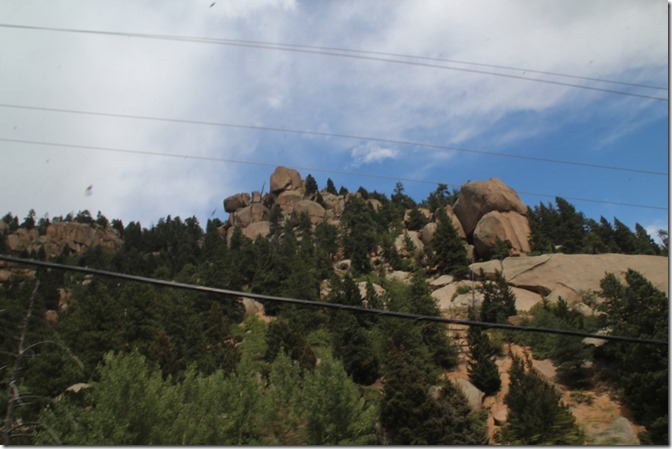 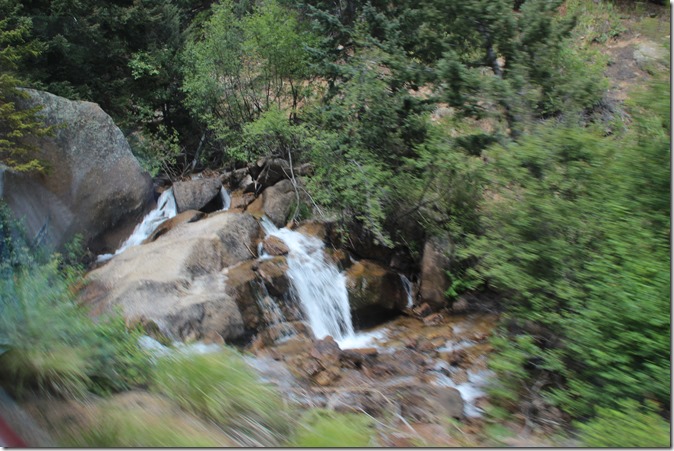 We did see this one big horn sheep on the way up. 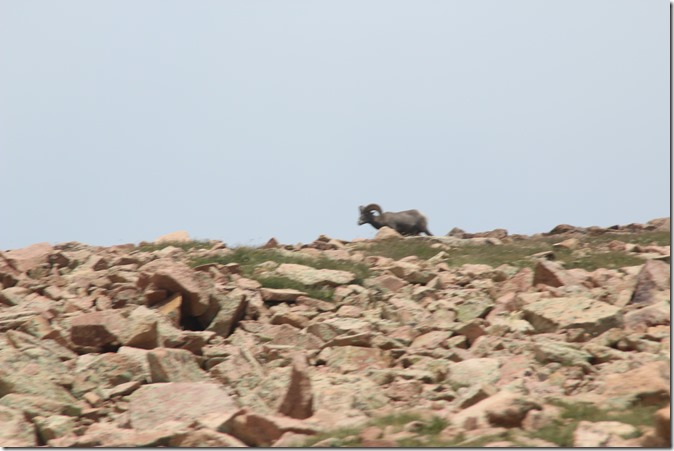 Then we were on the top. Cold and overcast, the snow had melted by this time of year and had not been replaced yet. It did, however, snow ever so lightly on our way down. I had looked in vain for a snowy Pikes Peak as we drove into Colorado Springs and found none. And quite frankly, it looked like all the surrounding peaks, even if it was a mite taller, without the snow that I was expecting. We were there in August, remember, so I suspect as I am writing this, the snow may have begun to accumulate. We were above the timber line, and all we saw on top was this covering of rocks, or as our guide put it, lots of big gravel. 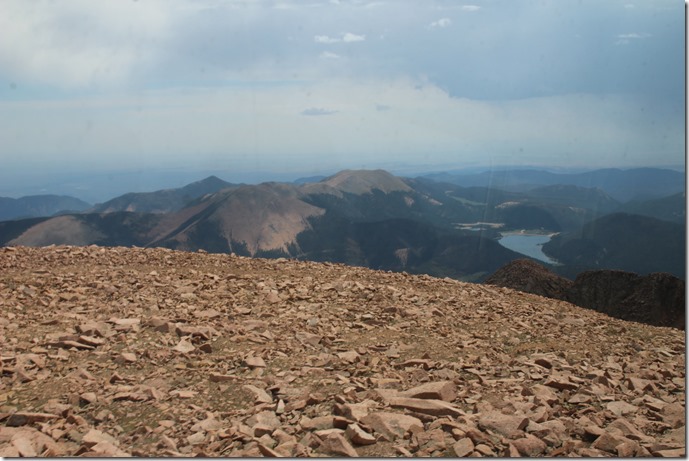 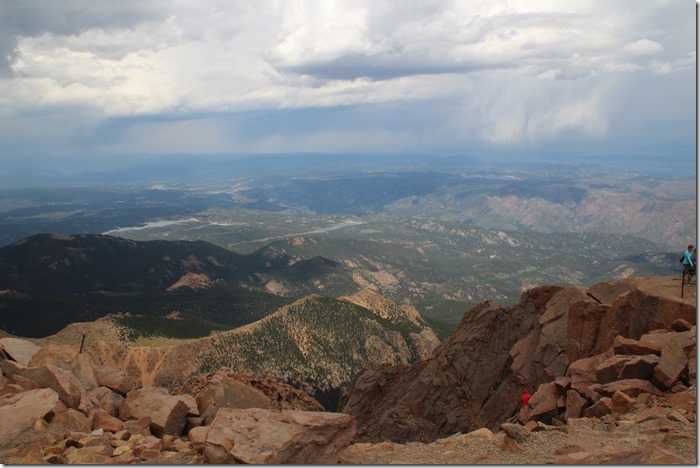 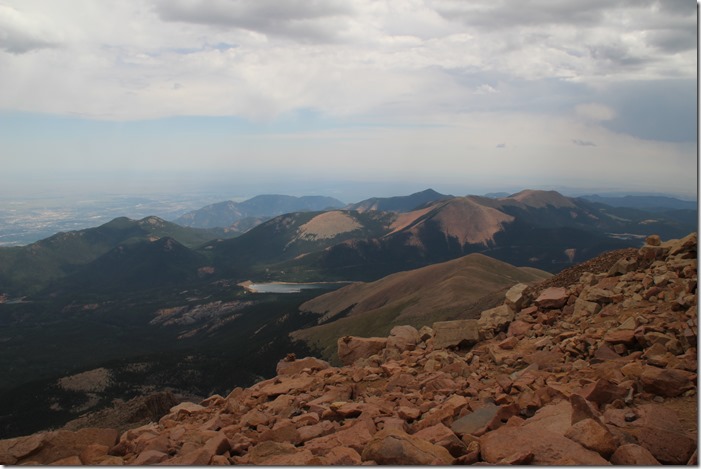 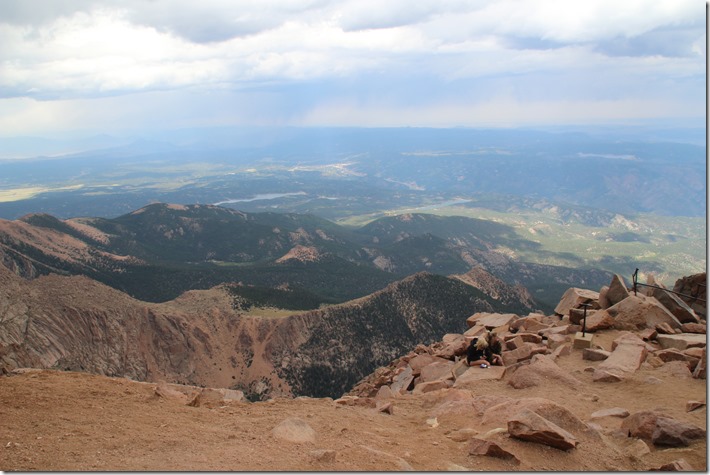 The Cog Railway is called that because what moves the railroad car is the cogs or rack it runs on. Explaining how it works would be a story in itself, and I am not sure I could do it justice, so if you want to really get the details, go to http://cograilway.com/about-the-train.asp where they will do a much better job than I would. I will tell you it is the most efficient way to move the train car up a steep incline such as Pikes Peak. 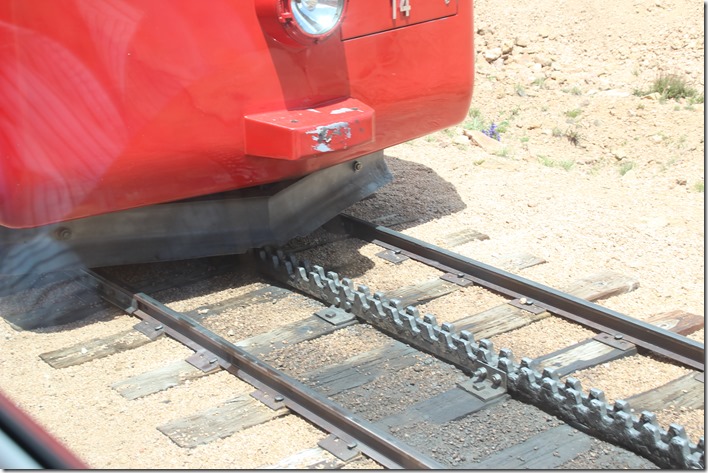 And being a cog railway also means that the car doesn’t turn around for the trip down the mountain, which I was expecting so I could see what was on the other side. The wheels in the cogs just reverse directions, and the car goes back down. 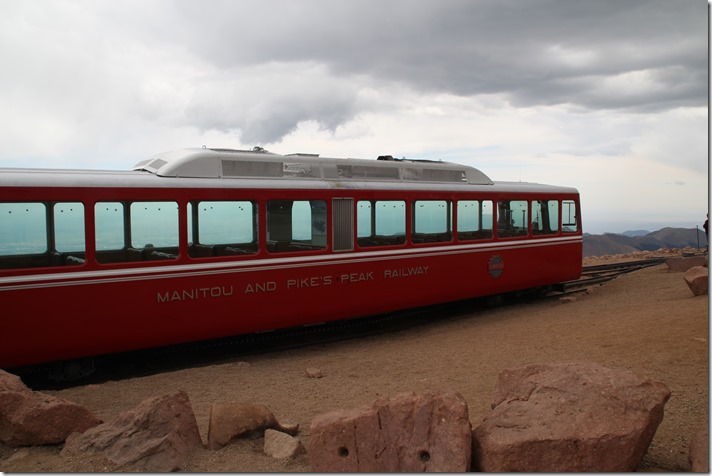 Naturally they had signs for the expected photo-ops to prove that you in fact had gone up the mountain. So I made sure we had pictures of the signs. 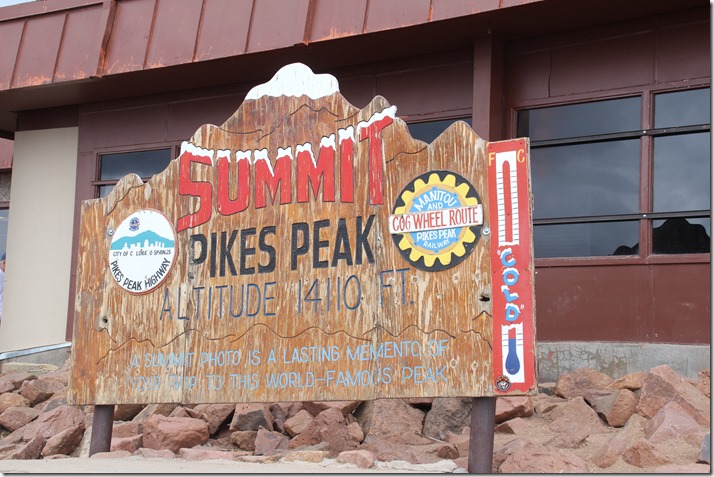 It was on a visit to the top of Pikes Peak in 1893 that Katharine Lee Bates was inspired to write a poem about her view of the Great Plains. She completed the poem back in her room at the historic Antlers Hotel, which is still in operation,  and it was later set to music. We know it as America the Beautiful. This monument tells the story and gives the lyrics. I don’t think it was as clear the day we were on the peak as it must have been for Bates. But you could almost see forever. 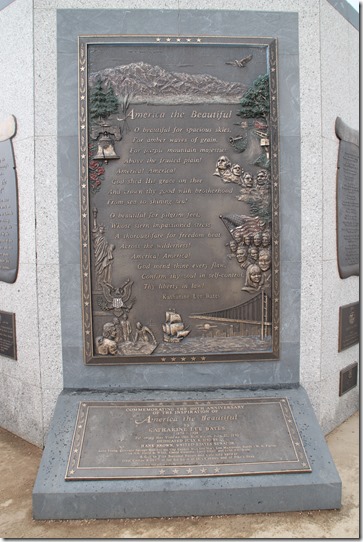 As I mentioned, the peak was nothing grand to look at, what with no snow, and no distinctive shape, but I wanted a shot of the top. See the vague brown, sort of hilltop behind the train? That’s the top of Pikes Peak! This is all I could get as we started our descent. We had a nice visit the whole trip with the two ladies seated opposite us that you see here, mother Sigrid and daughter Yvonne. 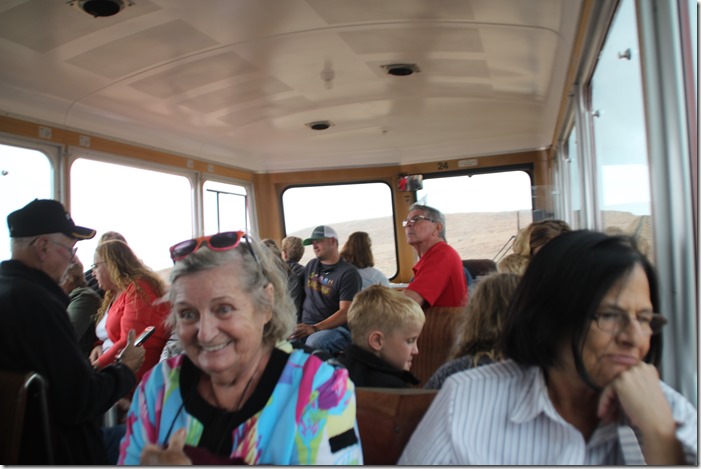 On the way down these female big horn sheep showed up, and if you look closely at the center of the next shot, the dark brown lump running away from us a marmot, the mountain version of a big prairie dog. I had the feeling that marmots are sort of the unofficial mascot of the mountain. 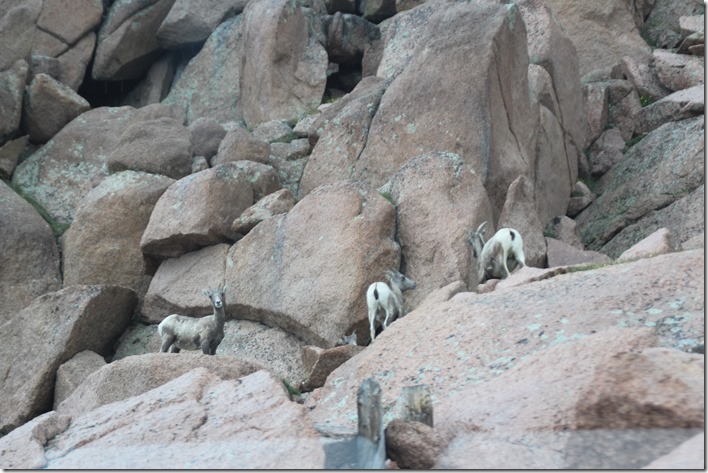 I know, he just looks like a browner rock, and I probably shouldn’t take up the space with this photo, but the picture also shows you some of the topography of the mountain. In the winter this would be covered with snow. And the marmot would be hibernating on the mountain. 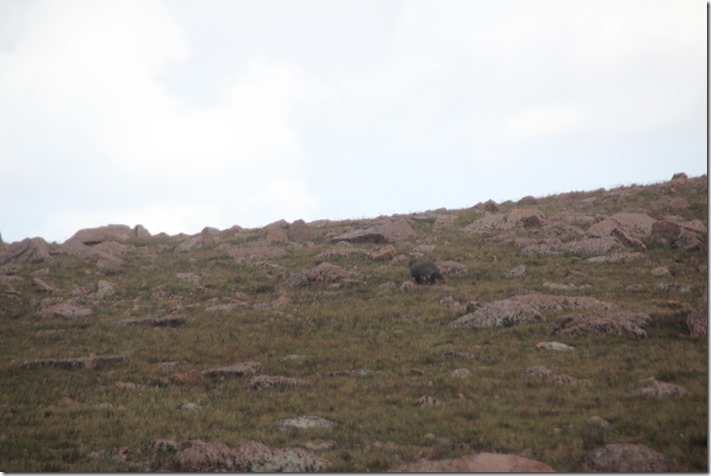 I tried one last parting shot as we descended. 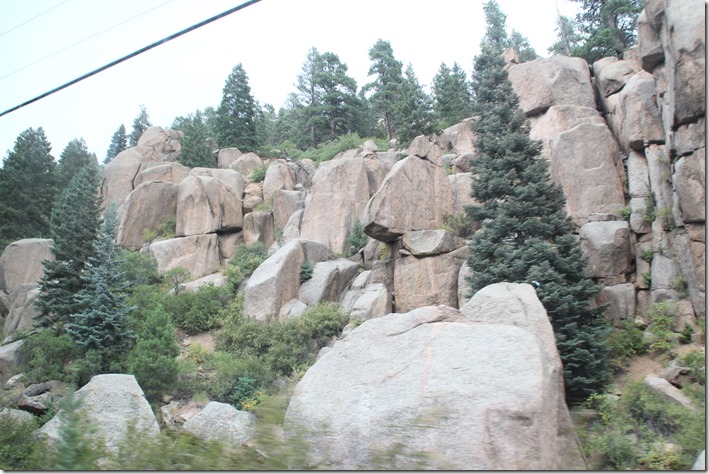 At 14,110 feet, it was no Kilimanjaro, and I rode the train instead of climbing to the top, but I guess I can count it as my second visit to the summit of a mountain. 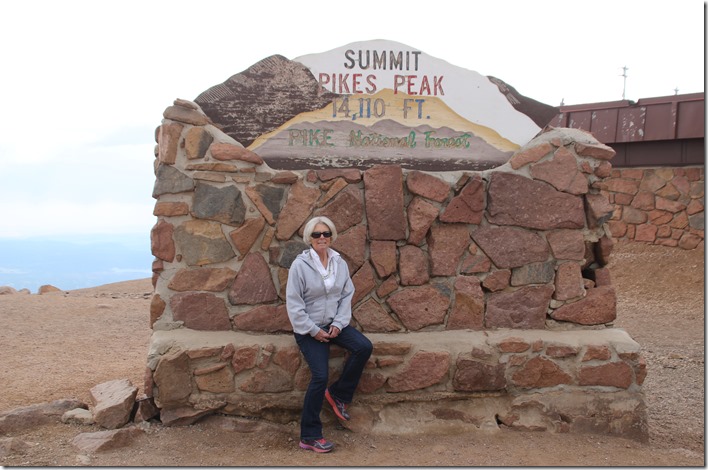 The trip to Colorado Springs is almost over, but we had two more adventures. Stay tuned.