Muleshoe lost one of its most loyal supporters and tireless workers last week when Nelda Merriott died unexpectedly. She was 82. 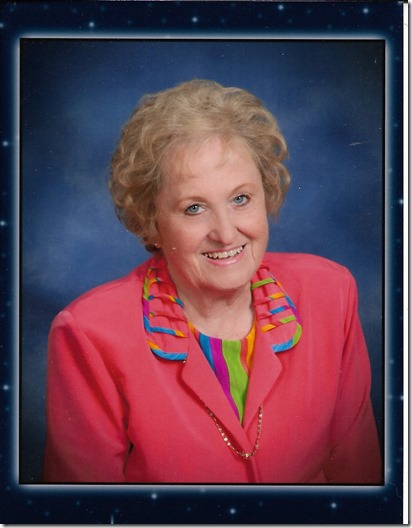 Obituaries give you all the basic family information: she as born April 1, 1934 in El Reno, Oklahoma, to Virgil and Ora LeBleu, the youngest of four children; she married Lonnie Merriott on June 24, 1954, in Muleshoe; she had two sons, Gary and Mickey, and she had three grandchildren and four great-grandchildren. She was a member of the Calvary Baptist Church in Muleshoe and was employed in the county and district clerk’s offices for nearly 40 years.

What an obituary doesn’t give you is a glimpse into the countless ways she worked to improve the quality of life in Muleshoe, her leadership in several local organizations, and her seemingly bottomless energy and determination to, as friend Ann Johnson put it, “get things done.” All of these accomplishments leave me in a quandary as to where to begin and, eventually, what to leave out-I don’t think I could begin to include all her projects and contributions. So I will share with you some of the stories told to me by family, friends, and fellow Muleshoe citizens.

Her family moved to Muleshoe when she was a small child. As a teenager she worked at Damron Drug’s soda counter, which is where she met future husband Lonnie when he would come in for a soda-and perhaps just to see her. Lonnie’s father, Brother Earnest Lloyd Merriott, was the pastor and one of the founders of the Calvary Baptist Church, originally in Lazbuddie, now in Muleshoe, and the family told me, with a few chuckles, that Lonnie behaved like the stereotypical bad boy preacher’s son, pulling plenty of pranks, getting into trouble, and loudly cruising Main Street with no mufflers on the car. Nelda was hooked; Lonnie pursued her. Dad was not so enamored with the romance and told her in no uncertain terms she was not to see him. I suspect  the same dogged drive and determination that later got things done rose to the challenge, and Dad was finally convinced-or worn down- and she won. I suspect that same skill also calmed down Lonnie during the courtship. She was a year older and had already graduated high school. She told Lonnie she wasn’t about to marry someone without a high school diploma, so they married the next year when he graduated. And the rest is history.

Nelda made her mark in the clerks’ offices in Muleshoe and Bailey County, working with Al Griffin and later Hazel Gilbreath in the county clerk’s office for about ten years before she ran for district clerk herself in 1967, and continued to be reelected for another 30 or so years. She served on the Board of Directors of County and District Clerks Association of Texas and was honored by her peers as Outstanding District Clerk of Texas for 1980-81. She was known throughout the region for the bus tours she organized when it was time for the area clerks’ annual meetings. She would reserve a bus, gather up the clerks, and serve as tour guide for the whole affair, to and from the various locations of the meeting as well as activities while there. In fact, in 1984 the V,G, Young Institute of County Government at Bryan/College Station presented her with a plaque in recognition of all those bus tours she orchestrated to those seminars

District Court Judge Corky Green was quite complimentary of Nelda for her career in both clerks’ offices. He said originally district and county clerk used to be the same position and located in the same office. She learned the job while serving as deputy county clerk before moving on to be the district clerk roughly from about 1967 to 1996, quite an accomplishment, he said. Judge Green also went on to say she was quite a remarkable force. So much so, in fact, that when she called state representatives Pete Laney or Bill Clayton who both also served during their tenures as Speaker of the Texas House of Representattives,, she developed quite a relationship with these two lawmakers. “She knew them and they knew her. And when Nelda Merriott called, they listened!” he chuckled. I think her name was also well-known in the governor’s office during Ann Richards’ term for the same reasons.

Nelda was instrumental in the formation of the Jennyslippers in 1981, a ladies division of the Chamber of Commerce. According to Tales and Trails of Bailey County, Taylor Publishing Co.,1988, it was Nelda that contacted a friend in Littlefield where the women had an active group working with their Chamber of Commerce, and they schooled the Muleshoe women on how to get involved. Nelda was elected the first president and was a driving force in the organization. One of the things she was responsible for was making sure the Jennyslippers had a float in every 4th of July and Christmas parade from that day forward to the present, with the float being decorated in one of her barns and with her no doubt more or less in charge.

Even though she was never a Girl Scout, she felt scouting was something that would benefit the girls in Muleshoe and was instrumental in getting a chapter started. She managed to get the Girl Scout Hut renovated in 1985, a work in progress to this day, and served as chairman of the Muleshoe Girl Scout Service Team. One year, or maybe every year, she took the girls to the Muleshoe Wildlife Refuge and camped overnight with them so they could earn their appropriate badge.

Seems she was insistent that the Girl Scouts always had a float in the parades, too, but would trade off helping build the floats for each organization-conflict of interest you know- since they would be competing for float prizes. The way she got around that would be to offer her barns as places to build the floats, but would help build the Jennyslippers’ float one year and the Girl Scouts’ float the next year. And they always seemed to show up and compete well in the parades, even when Nelda about the only person working on them.  Here she is on the 2014 Girl Scout float along with a girl scout and Donna Kirk, a fellow  Jennyslipper who has  moved to Lubbock. 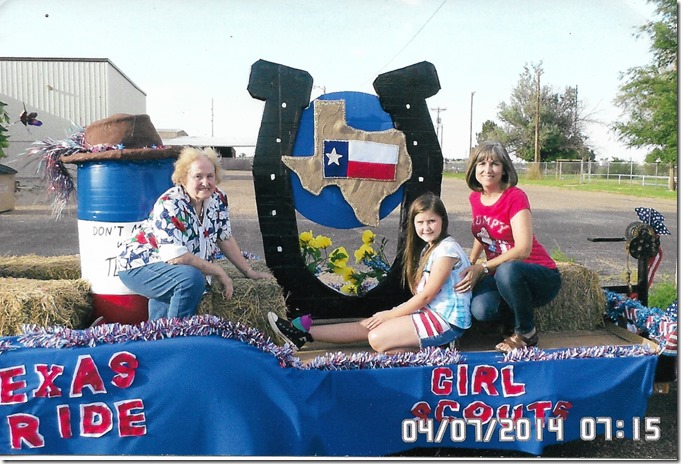 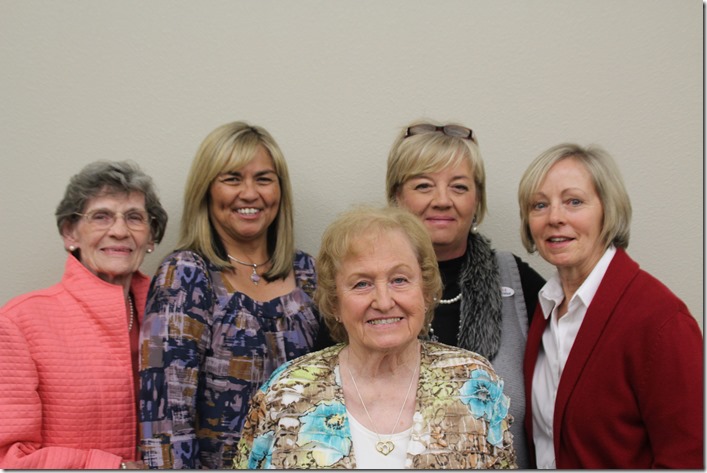 Women of the Year for both these organizations tend to excel in leadership and volunteerism. Nelda was recognized for her leadership and volunteerism by none other than then Governor George W. Bush when he presented her with the Governor’s Award for Volunteerism on July 2, 1996. On the back of this picture she wrote He became U.S. President, just to make sure no one missed the point! I’m sure it was a proud and exciting moment for her. 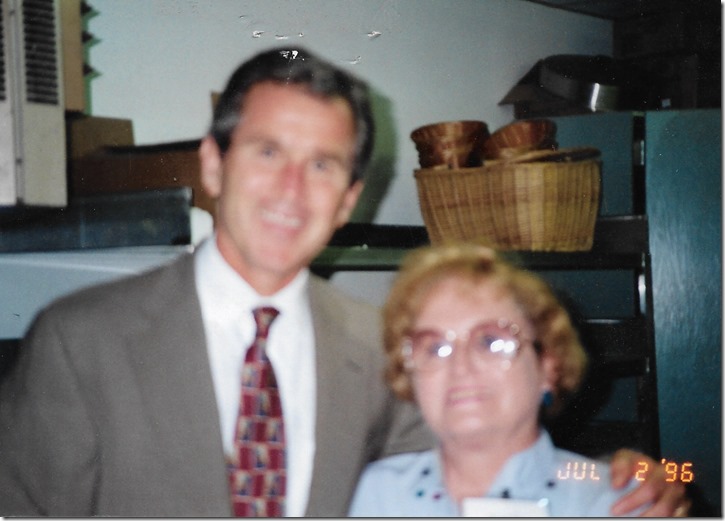 We moved to Muleshoe in 1980 and although I’m sure I met her somewhere along the way and knew she was actively involved in all things Muleshoe, I didn’t get to know her until I joined the Muleshoe Art Association where she was a member. I have been a member about three years; she had joined a few years before me. By this time the scoliosis she had been born with had taken its toll on her back, and she had the crooked walk that we who knew her in her later years came to identify with her. But she didn’t let that slow her down. She just went on her merry way and kept planning projects. She also suffered some mild strokes during that time and was  battling short-term memory loss, which she would immediately announce to you by way of explanation as to why she would be taking notes on everything we talked about or to explain why she might have missed a meeting. But she was determined not to let that hold her back. In fact, at the time of her death she was on a mission to establish a mule museum, complete with a live mule to live at the Heritage Foundation. It really is an appropriate concept for a town named Muleshoe, but she wasn’t having much success getting many people convinced and couldn’t understand why no one wanted to tackle the project with her.

Nelda was also up front and vocal when the Muleshoe hospital was in dire straits in 1987 and Texas Monthly ran an article about the ongoing drama in their January issue. Nelda was interviewed and quoted twice for the article. Then she wrote a letter to the editor in response, which was published in the March issue. She ended with “We know that the people of Muleshoe will put their shoulders to the wheel and do whatever it takes to open and maintain a hospital here.”

And that’s exactly what she expected everyone in Muleshoe to do because that is exactly what she did. And always did when she embraced a cause or project. Friend Magann Rennels chuckled and summed up Nelda’s perseverance this way: “Nelda was just pushy! When I am pushy, no one listens. When Nelda pushed, she got things done. It worked for her. She was a leader.”

Nelda’s daughter-in-law Dawn Merriott grinned when she put it another way: “Nelda had control issues!” And then she and husband Mickey, Nelda’s younger son, shared the enchilada recipe story. Seems every Christmas they would have enchiladas instead of more turkey after Thanksgiving, and the family always looked forward to these enchiladas. She used the El Monterey powder mix to make her sauce. One year she noticed the directions they put on the back of the package for assembling the enchiladas and declared they were doing it wrong, that her way was better. So she proceeded to write them a letter explaining her method and why it was better and mailed the letter. Not long after, she received a letter from the company agreeing with her along with announcing their plan to use her recipe in place of theirs. Nelda had won again-another clear case of not being afraid to speak up to change things that need changing. 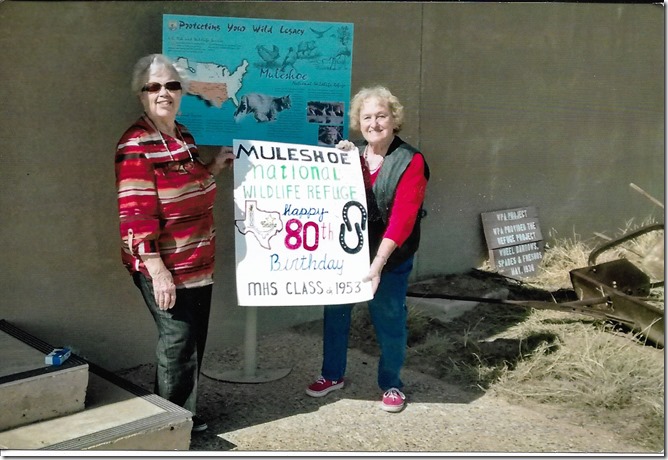 Muleshoe just won’t be the same without her. The Jennyslippers Putt-Putt golf course has already closed because Nelda just couldn’t run it by herself as help dwindled. The Girl Scouts will miss her involvement and leadership. Our parades may wind up two floats shorter than before. No one will be as likely to call Austin when an issue needs addressing. Stories of her help to those in need and myriad projects to make Muleshoe better and create positive publicity for the community will be shared for years, and Muleshoe will continue to benefit from the results of her work-ethic and pride in her community. She will be missed.

My thanks to Mickey and Dawn Merriott for sharing stories and pictures 1, 2, 4, and 5 with me, and Ann Johnson, Sandra Chancey Magann Rennels, Gilrobert Rennels, Judge Corky Green, Nancy Kidd, and Billie Downing for helping with details and information for this article.