These days the world is not always a safe place, even for those people we entrust to keep us safe. To recognize and honor those individuals whose job it is to keep the peace and be present in time of crisis, the Bailey County Ministerial Alliance sponsored a community worship service Sunday morning, August 7th, at the Bailey County Coliseum. 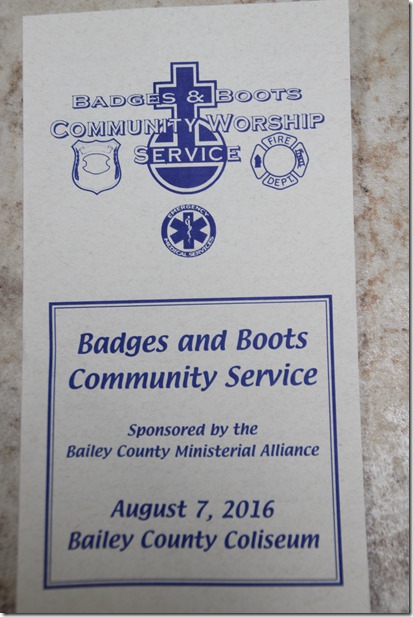 Billed as a worship service, church congregations were invited to attend this service rather than a regular Sunday worship service at their own churches. And attend they did. I arrived fifteen minutes early and the parking lot was easily more than half full; by the time the service began, the coliseum itself was full. Members of different Muleshoe churches, visitors from out of town, and, I suspect, people with no church affiliation, all came together as one to say thank you to the police, fire department, sheriff’s department, EMS, Texas DPS, and the game warden for serving in their respective capacities.

This was a religious gathering, but patriotism was reinforced as well. After the invocation was given by Rosendo Lopez, the Canon Air Force Base Color Guard presented the colors. We were led in singing the National Anthem by Jeff Bailey from the Cactus Theatre in Lubbock, recited the Pledge of Allegiance with Mayor Cliff Black, and then sang God Bless America with Mr. Bailey. 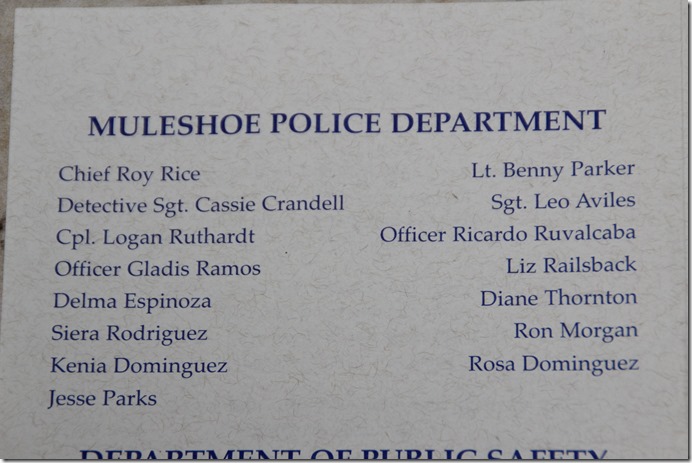 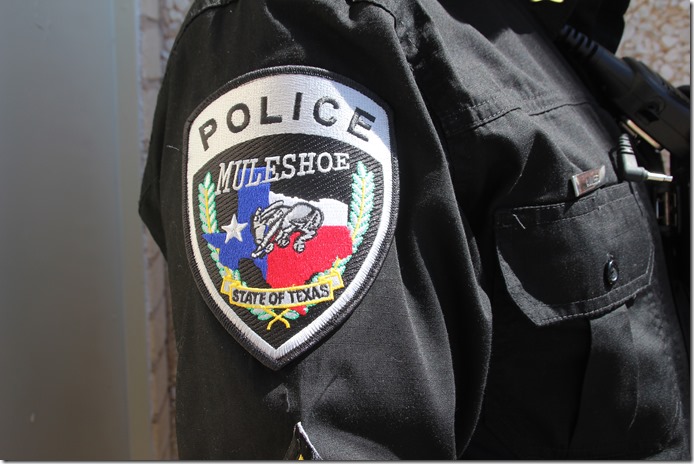 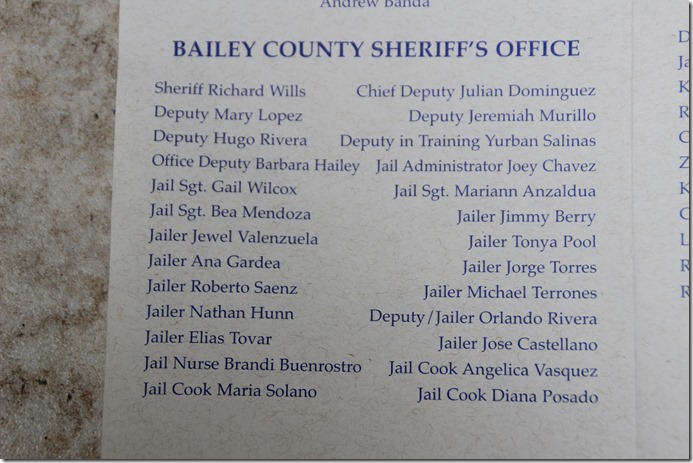 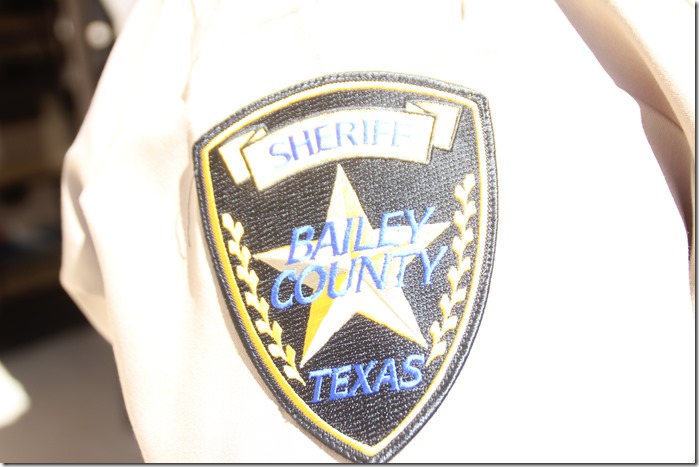 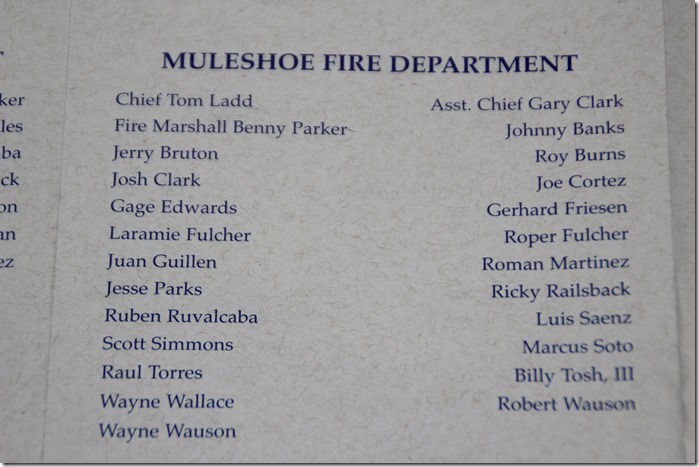 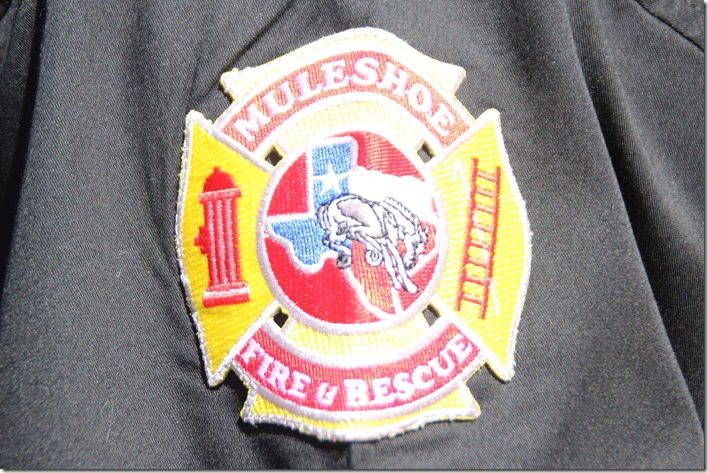 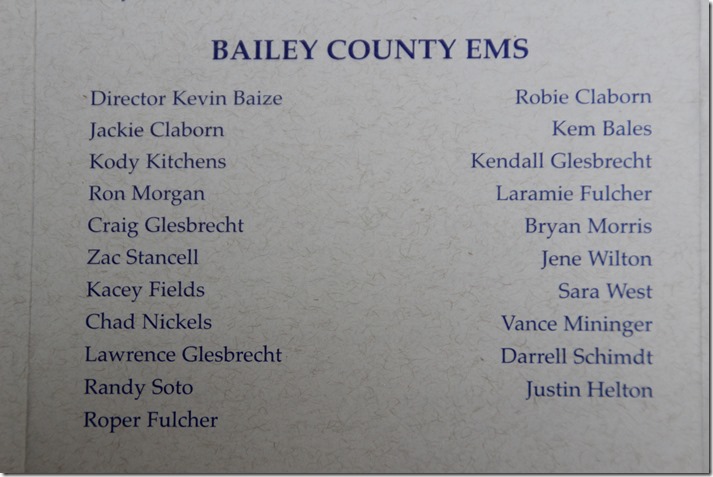 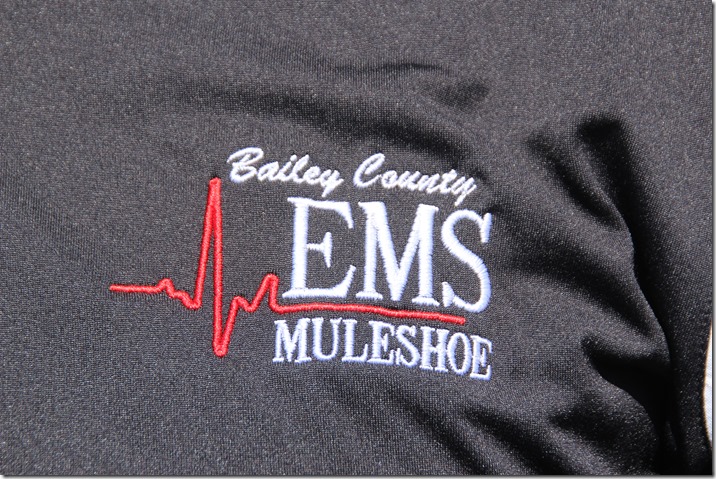 The Department of Public Safety, represented by James Perez, and the Game Warden, Andrew Banda, were recognized by Elias Torres.

Even though all groups were introduced, not all members in each group were able to attend the service, many, in part, because they were on the job doing those very things we were honoring them for! Not wanting to leave anyone out, I chose not to impose on them by asking for group pictures, but instead included them all with these lists as printed in the service program.

We all chuckled when Jeff Coffman teased the police officers about reminding us to come to a complete stop at stop signs and Steve Friskup made us smile when he talked about the Sheriff’s Department coming over to help catch errant goats and chickens, but no one made light of the fact that while threat of deadly force doesn’t happen every day to these people in charge of our safety, the possibility of deadly threat is a fact of life, something always lurking about as they carry out the duties and responsibilities of their assignments. And for that commitment, we are grateful.

More songs were sung, prayers were prayed, and Judge Sam Medina from Lubbock gave a message of appreciation, reminding parents to instill in their children a respect for law officers, the fact that officers are there to help us, and if they don’t want to get in trouble with police, well, then, don’t break the law!

An offering was taken which totaled $6,097.03 and Sergio Leal announced that the money will be sent to the Dallas Foundation’s Line of Duty fund to provide educational scholarships to the children of officers recently slain in Dallas.

After parting words from Reydon Stanford and the benediction by Ruben Acevedo, the honored groups gathered outside the doors so that on their way out, members of the audience could express thanks and gratitude for the work these individuals do.  I think everyone, including me, enjoyed meeting these honorees and thanking them in person for their willingness to serve the community. I also found it personally gratifying to see several of my former students in those lines, all grown up and being active in their hometown.

Being a law officer or fireman or first responder all come under the heading of thankless jobs that, amazingly, some brave souls are still willing to tackle, despite the risks. I hope the Badges & Boots service reassured them that we do recognize and appreciate their efforts.