Alice and Elaine Do The Hill Country

Elaine arrived at noon, having driven over from her home in Pleak, outside of Houston. Really. First stop was a visit to Shari in Spicewood to see her eclectic/Victorian garden’s latest addition, a baby grand piano. Don’t you just love all the glasses!  Our version of the Blues Brothers? Or maybe Joe Cool. But the piano is cool. Shari has a lovely garden with all kinds of interesting decorations- 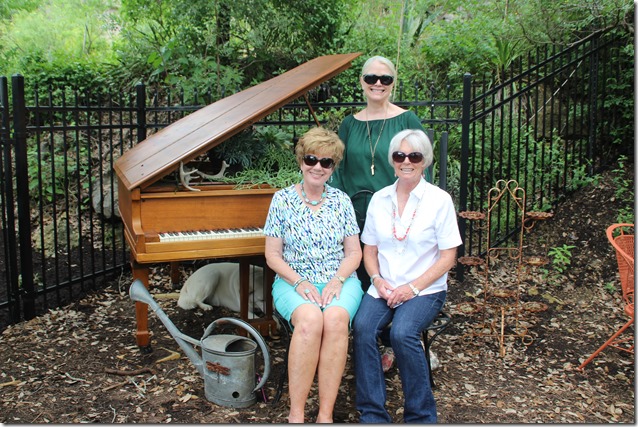 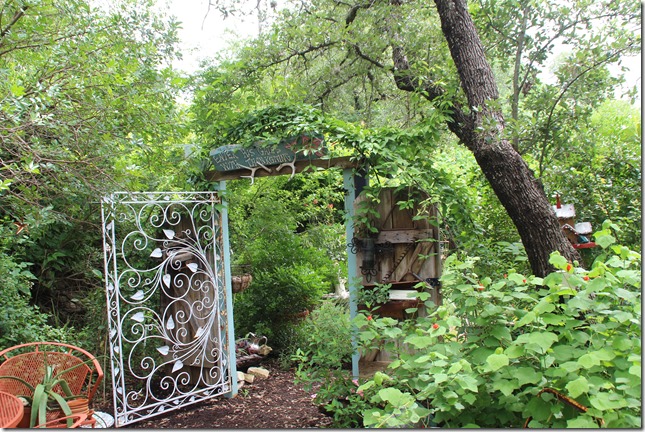 On an earlier visit, Shari and I had followed the winding road past her house for lunch at Lee’s Almost By The Lake, so Elaine and I had lunch there, too. Interesting place known in the area for its soup, which turned out to be seasonal, and we had just missed the soup season. But the chicken salad and grilled cheese we had were very satisfying. 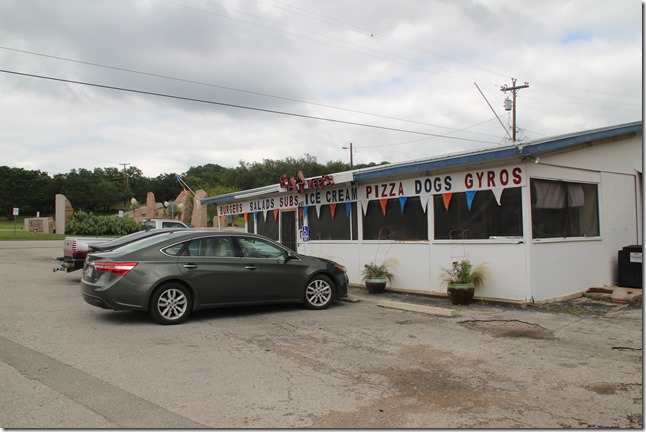 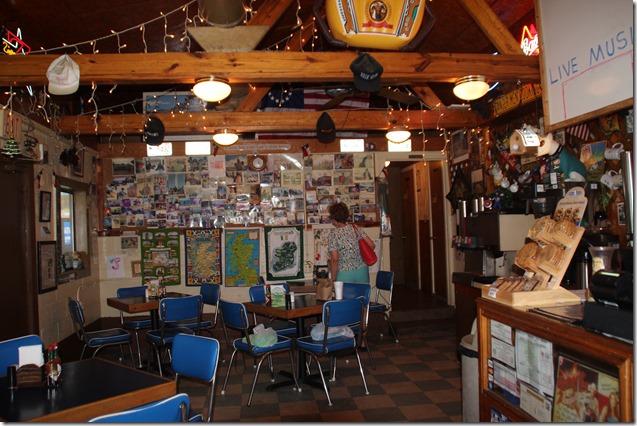 We stopped at Revival in Bee Cave before heading back to Marble Falls for the Pottery Ranch and pie from the Bluebonnet Café. And that was enough driving for the first day since I had plans to put many miles on the car in the next two days.

Tuesday we were up early and on our way to Paint Rock to order rugs from Ingrid’s Custom Hand Woven Rugs (“Ingrid’s Custom Rugs, Inc. is a Step Back in Time,” February 2, 2016). On the way we made a stop in Eden as we passed the appropriately named Garden of Eden and enjoyed a little stroll by their fountains, larkspur, oleander, and many other identified plants along the various paths. It really was quite lovely, worth the stop. 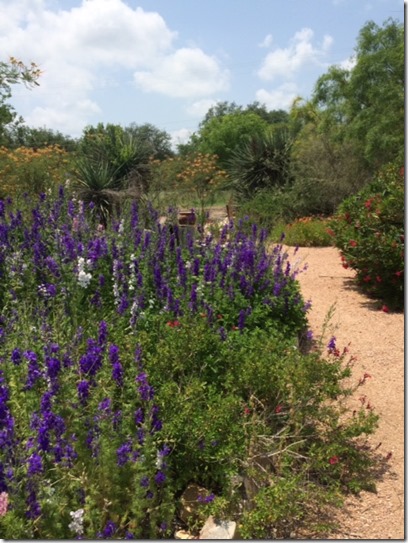 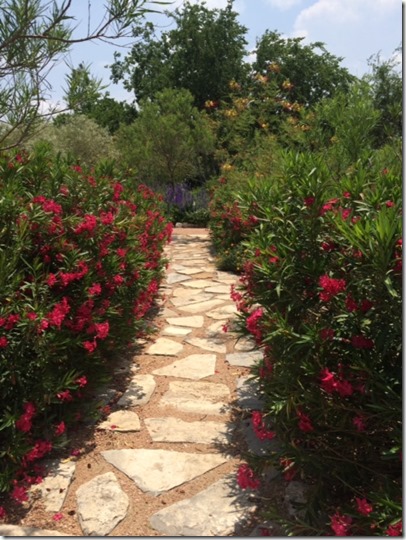 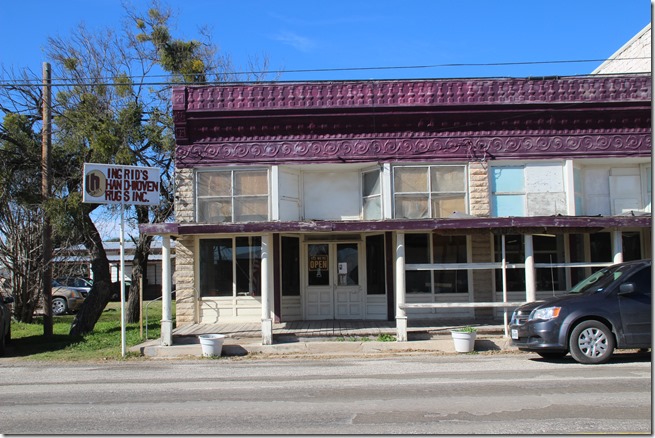 Reinhard gave Elaine the tour of the facilities. She ordered two custom pieces and left with three rugs from the selection of those already woven and ready to go. I ordered a custom one, too. 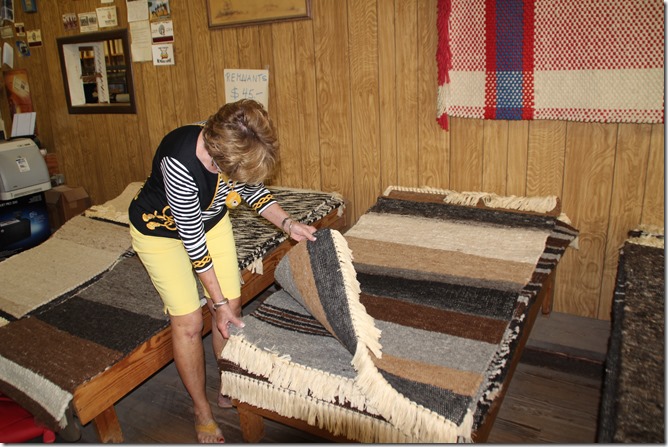 We decided to go back through Ballinger and ate at the Sandwich Shop on the corner, an interesting old building and a good lunch. 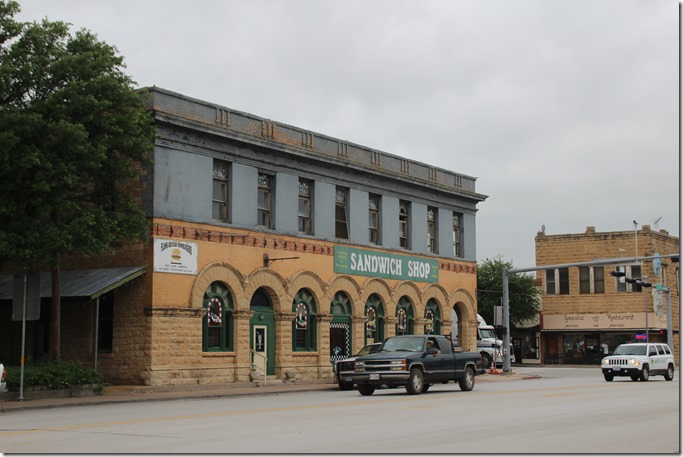 Back in Mason at the Country Collectibles store we rummaged around the rusty junk and left with two old tool boxes, a wrench, a big bolt, and a horseshoe as possible trinkets in the dish gardens we would later plant. We also drove around this quiet forgotten little town and looked at the old homes and this beauty, the Seaquist home, which was being restored to be opened for tours. 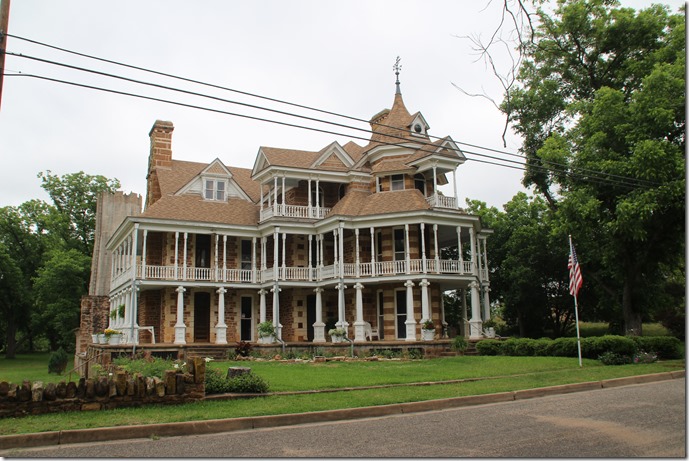 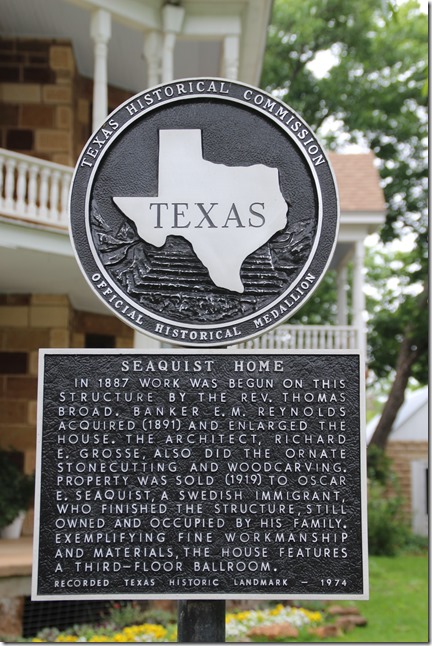 Llano was next, and we hit two shops there. I came away with a metal rabbit in silhouette and Elaine bought an enamel wash basin. We figured that was enough for one day, so it was back to the lake for more conversation and discussion of the merits (or not) of purchasing from Amazon Prime and other timely topics. I also took a walk and flushed out several deer. Most of the them bolted and ran off with a flash of those namesake white tails, but this little fellow was curious enough to let me take his picture before dashing off. 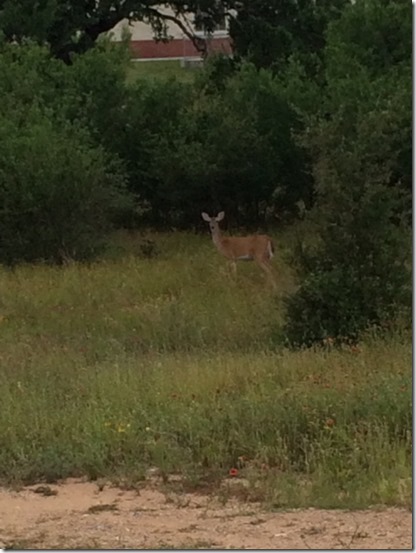 Wednesday arrived rather chilly and rainy, but we didn’t let that stop us. We hit junk stores on the drive to Burnet and in Burnet. One place called Finds really did have some neat things. Elaine bought this deer antler framed cross, and I took a picture of something I knew I could find in Muleshoe, a rotary hoe wheel, which I want for the cactus garden. 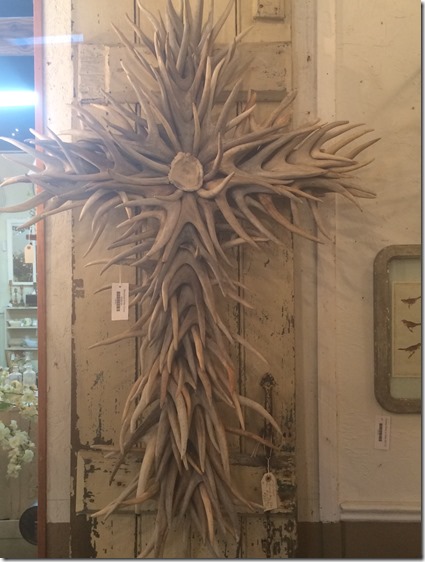 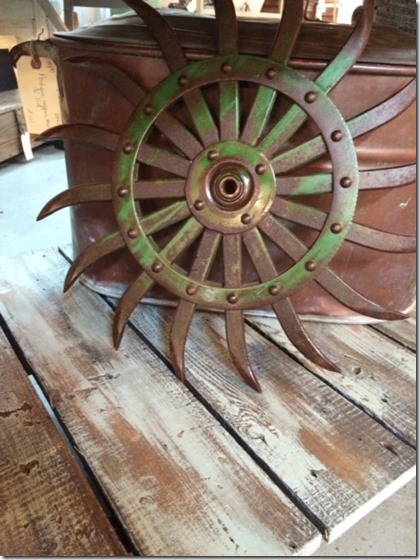 In Marble Falls we spent some time admiring artwork in a downtown art gallery, Marta Stafford Fine Art and other neat things in Trendz. For lunch we discovered a new place off the beaten path called the Noon Spoon. I was glad to find it and plan to go back. 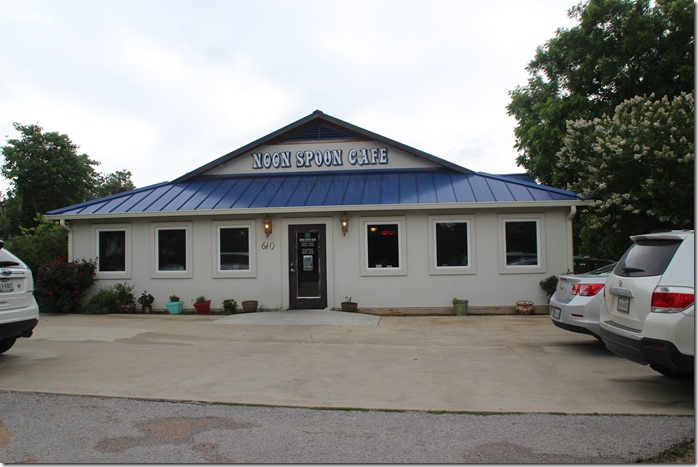 We sort of just drove through Johnson City and admired the court house and went on to Blanco and did the same thing. We thought about going to Wimberley, but that needs to be a day devoted just to Wimberley, so-another trip, another day.

But back at the lake, it was time to plant some dish gardens! Still cold, but we were on the deck out of the drizzle and came up with these two completed projects with the plants and containers we had found on our travels. Now Elaline has even more neat stuff to take home from this trip, and I had the fun of making more dish gardens.  What a deal! 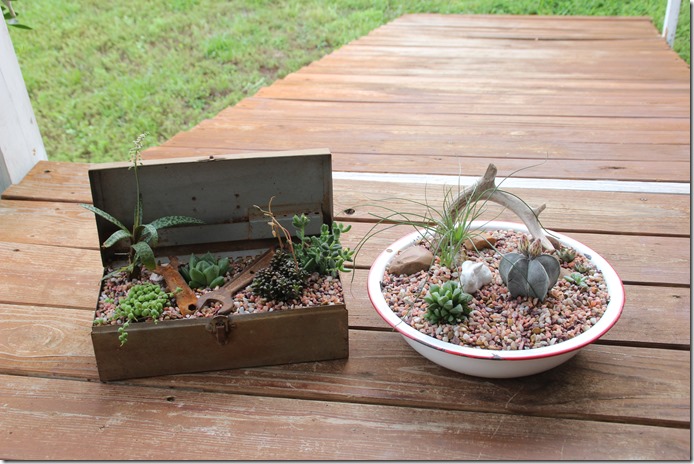 We said our goodbyes Thursday morning and we both left in the rain. Don’t panic-I had the road to myself and slowed almost to a stop to take this picture. I know-shouldn’t have-but I only do silly things like that when the roads are empty. 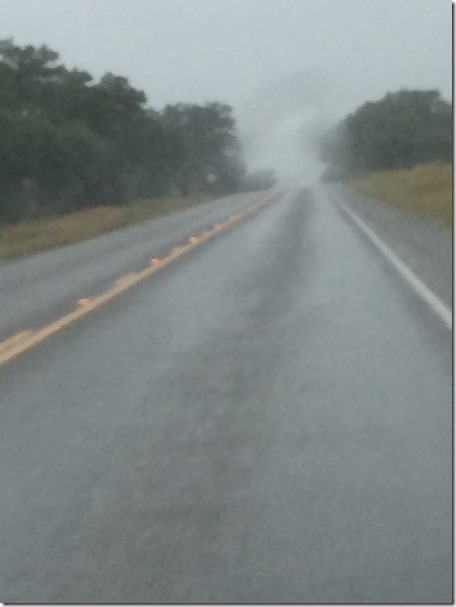 Elaine drove in lots of rain most of the way back to Pleak; I drove out of it by the time I made it to CactusTown near San Angelo to gather yet more rusty stuff for the garden. So I wound up with more neat things to take back from the trip, too.

Wonder where we will go next? This time-Texas; next year-the World!