We made it! Niagara Falls. 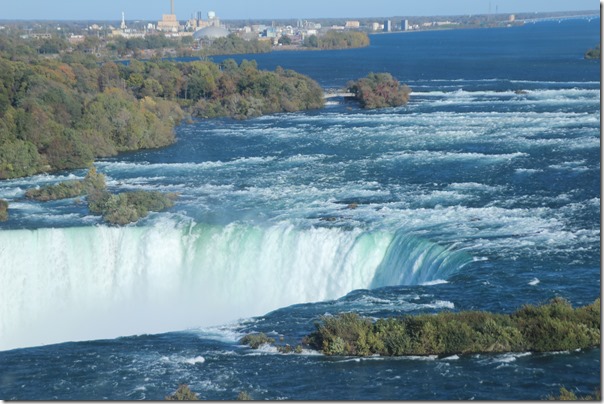 The morning was bright and clear and we had a full day ahead of us. The night before we had located the tram, what they call the Incline, that would take us down to the falls, so that is where we started. 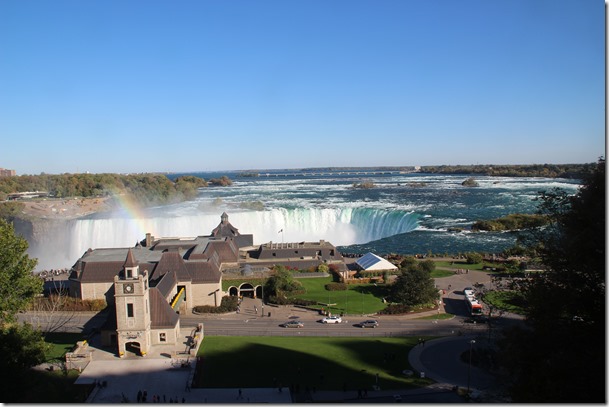 This is the view from the top of the Incline. The large building in front of the falls is the visitor’s center where we picked up tickets to all the attractions. Note the rainbow above the building. Rainbows are quite common because of the mist from the falls. 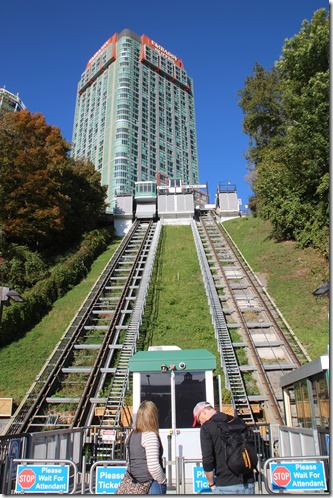 This is the view of the bottom of the tram. Then it was on to the viewing area to get up close and personal to the falls. The green color is from the sediment brought down to the falls in the water. 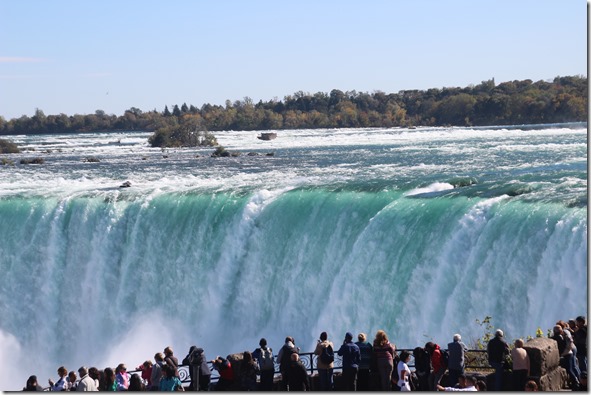 Later we will be on one of the boats like this one making its way to get as close to the falls as it can safely go. What you are looking at is the water as tumbles over the rocky edge. 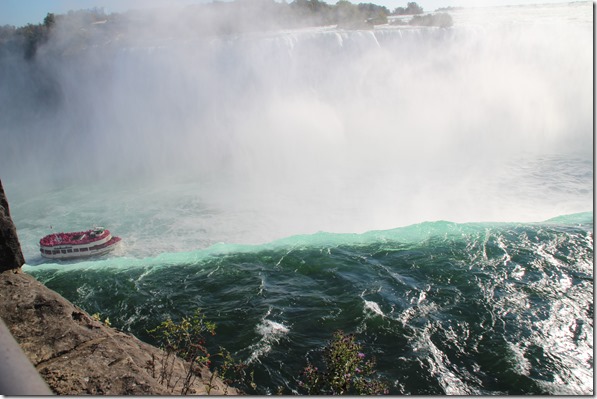 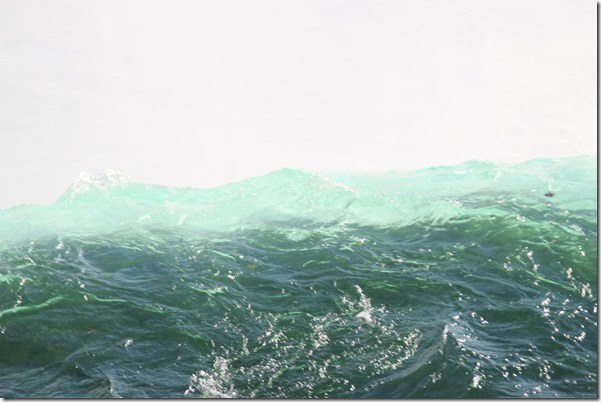 Our first event was to ride the boat up to the falls, the Maid in the Mist ride. This is from the boat looking back at Rainbow Bridge. The water falling churns up this foam which eventually dissipates as it floats down the river. 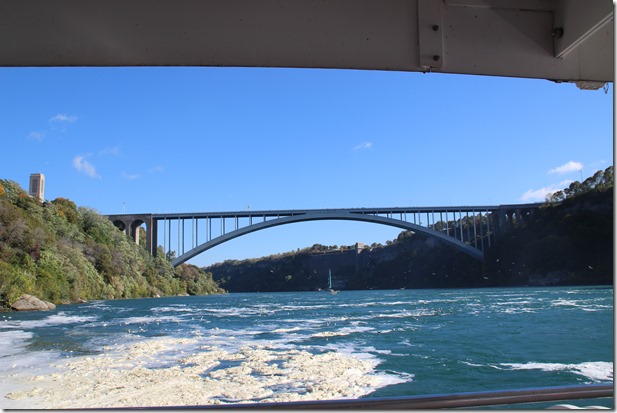 They give you these lovely ponchos to wear each time you get close to the water. They help, but you still get wet. And then afterward they have a large bucket for you to return them and they are recycled and used again. 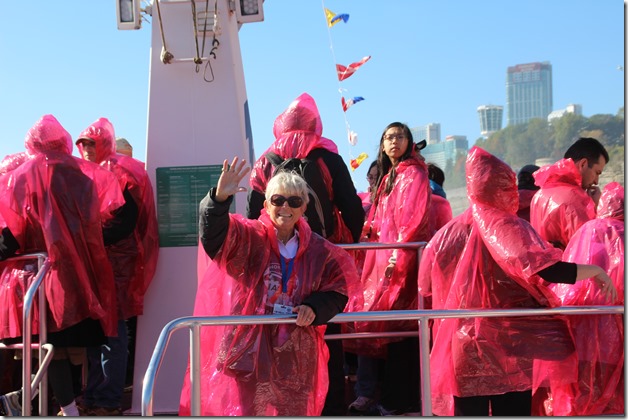 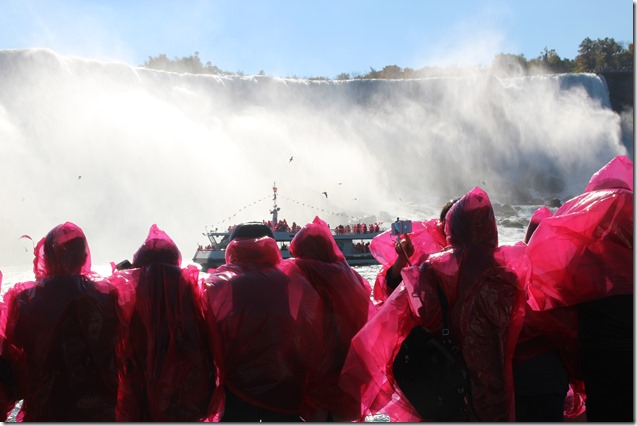 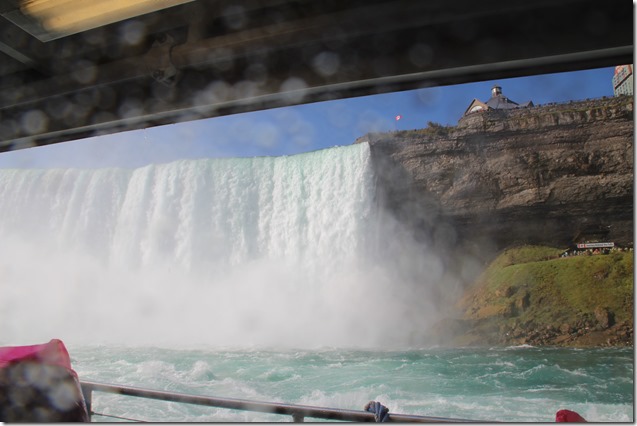 I was so intent on protecting my camera from the water and literally just being enveloped by it all  that the shot below is the only one I took up close to the falls! But you get the idea. 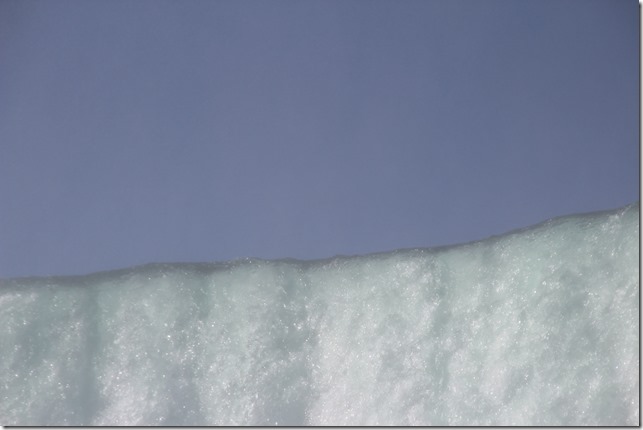 After shucking the poncho the next attraction was actually going behind the falls-and getting a yellow poncho this time. This was named, appropriately, Journey Behind the Falls. I foolishly thought we would somehow walk underneath and behind the falls on a path of some sort. Turns out tunnels had been dug leading up to the back of the falls, so it looked like this. 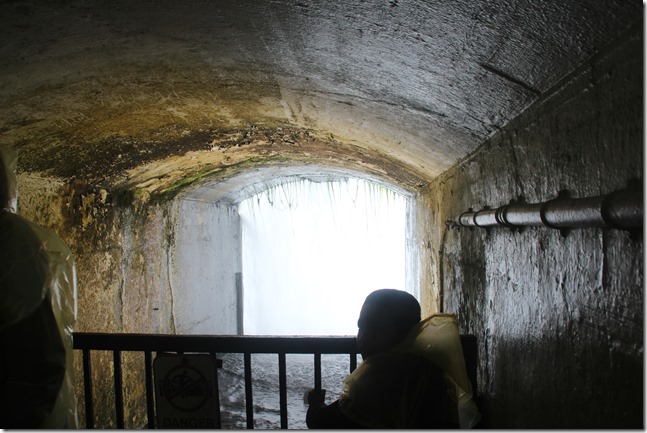 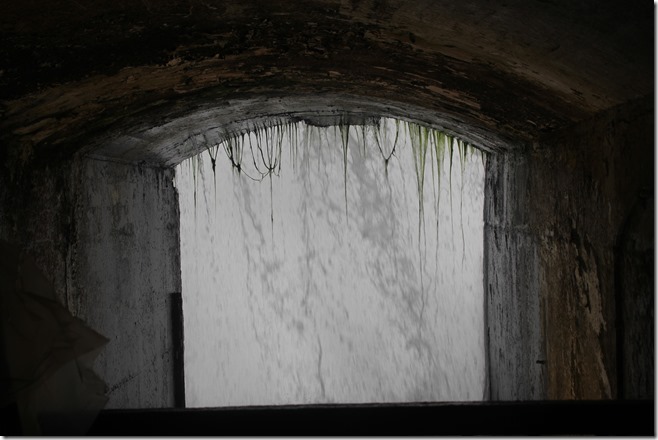 And then there was one spot where the tunnel came out almost under the falls. 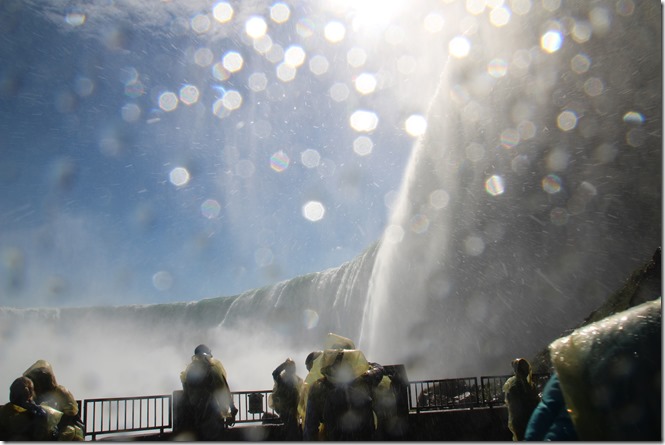 Next was an IMAX-style movie called “Niagara’s Fury” about the formation of the falls millions of years ago, complete with thunder and lightning, the earth shaking, and yes, more actual water! I think the poncho that time was blue. After the show, which was in the visitor’s center, we saw this poster showing the progress of the erosion of the falls. Mankind had nothing to do with this, just Mother Nature at work. God created the falls, but he also put the wheels of change in motion. I really have no problem with a Supreme Being and evolution working hand in hand. But that’s another story.  You can also see from this graphic why the falls on the Canada side are called Horseshoe Falls as they are shaped like a horseshoe. 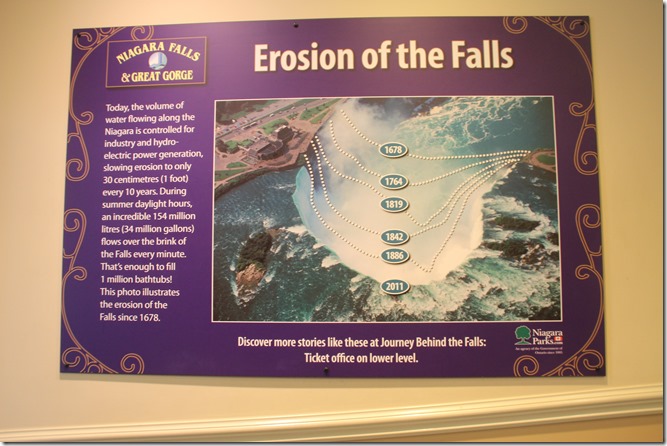 After the show, we ate in the visitor’s center, and I tasted something called ice wine, a very sweet wine they are very proud of in Canada. It is extremely sweet due to the fact that the grapes are picked after they go through a freeze. Then I took this shot of the American falls, the Rainbow Bridge, and one of those ever-present rainbows. 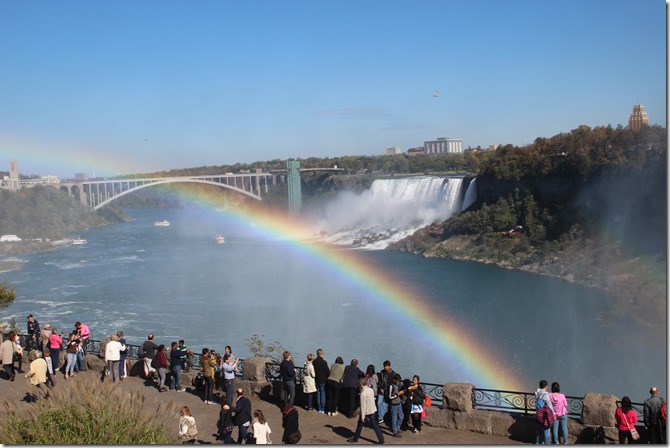 The American Falls are not as massive and impressive as the Canadian side and have not been developed for that reason, I guess. But we could see construction going on over there, so I guess they are working on it. They do have this scaffolding now for visitors to get close to the falls. 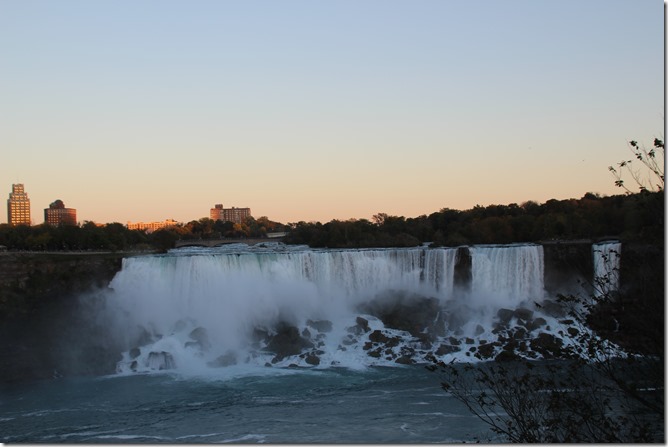 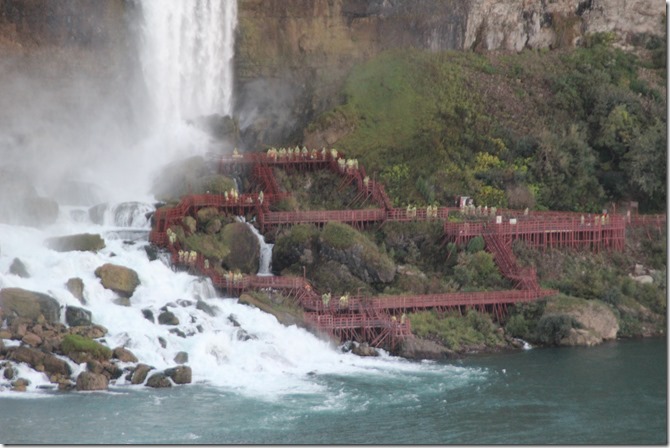 Next stop was the White Water Walk, where we actually did not get wet! We rode the WEGO city bus that runs in conjunction with all the attractions of the Falls to this entrance to Niagara Gorge, which is where the river narrows and develops into world class rapids. 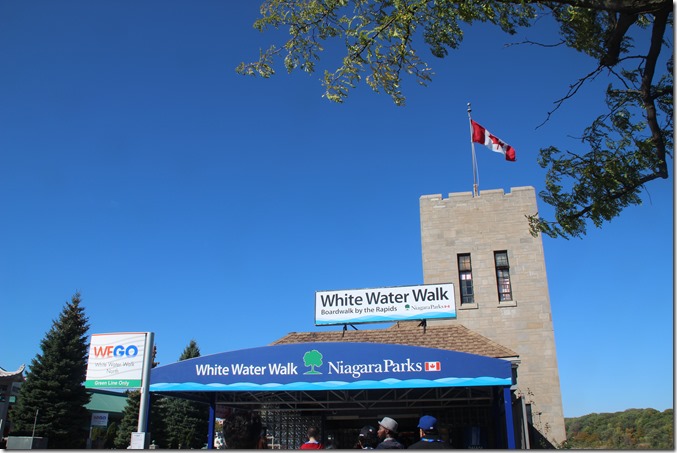 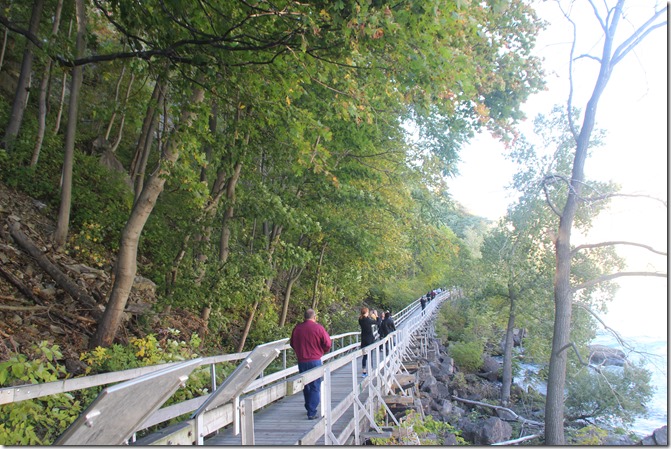 The boardwalk follows the river and rapids for about a quarter of a mile and visitors can stroll at their own pace and read the various information boards along the way. One of these boards talked about the classification of rapids. These rapids are considered level 6, world class. Apparently many people sought fame and fortune trying to ride these rapids to their final end, the Whirlpool, with about as much success as the people who chose to go over the Falls in barrels and such, which means they usually ended in disaster and death. These pictures don’t do the rapids justice, and my first attempt at taking a video with my Canon camera failed, so this will have to do. Or perhaps it will inspire you to go see them in person. 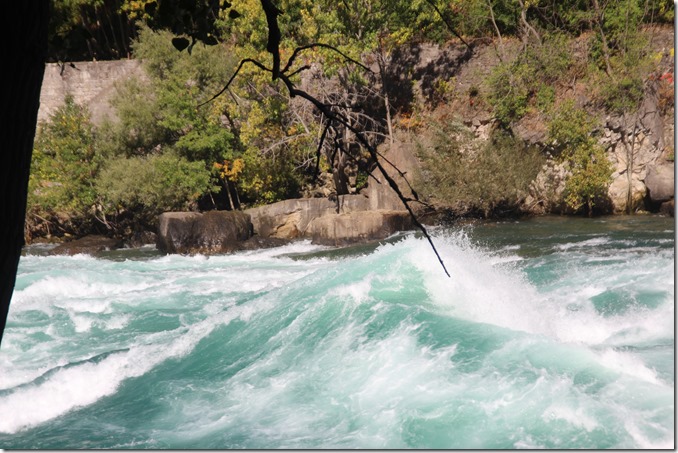 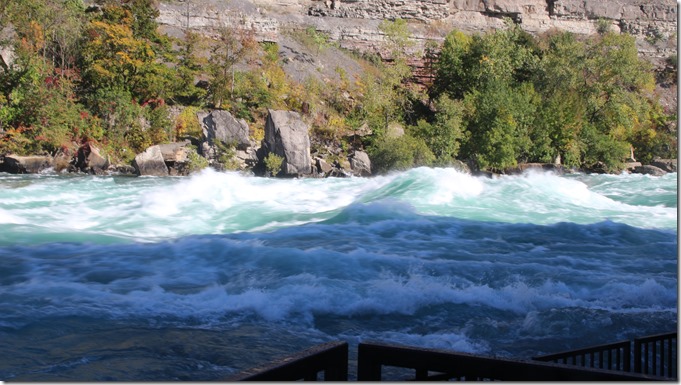 Later we walked down to the Rainbow Bridge to see the falls from that perspective. To do that involves crossing the border which also involves going back through customs with your passport to return to the Canadian side which turned out to be a bit time-consuming. 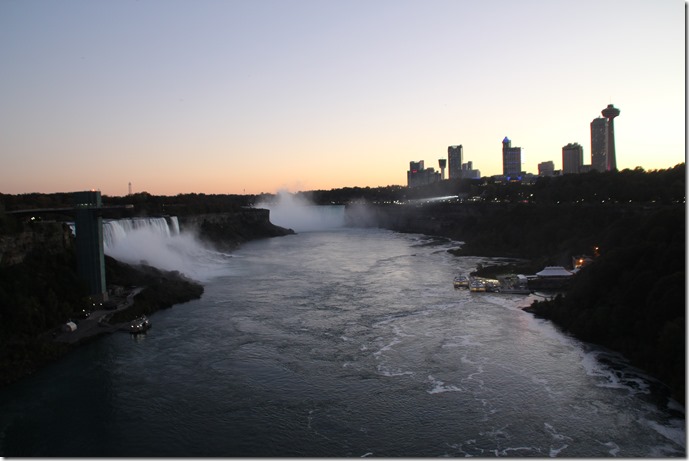 At night these lights dress up the falls. On some nights a fireworks display is featured. The night we were there was not one of those nights. But the falls themselves were show enough. 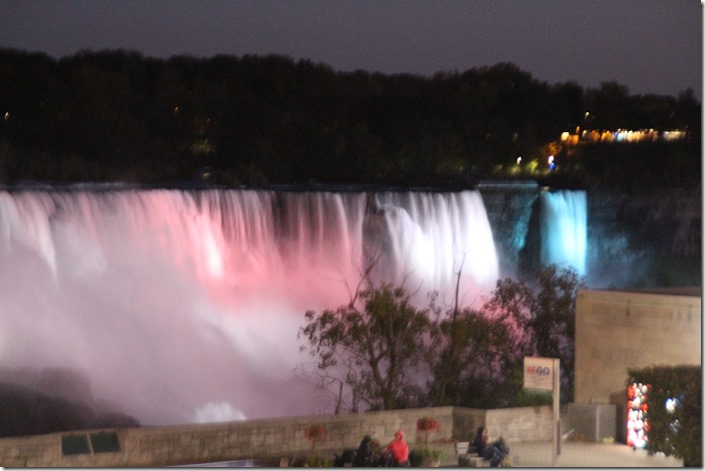 We had quite a day. We watched the lights on the water when we got back to the room and then called it a night. The plan is to get up for sunrise pictures before leaving for the trip to the Buffalo, New York, airport for the flight home. Stay with me for one last look at Niagara, coming in the final installment next week.