When I stopped to pick up the two pistols that David Wyer had repaired and cleaned for Bill,  I was amazed and fascinated as I walked into the old, nondescript building with the capital W on the outside front wall. 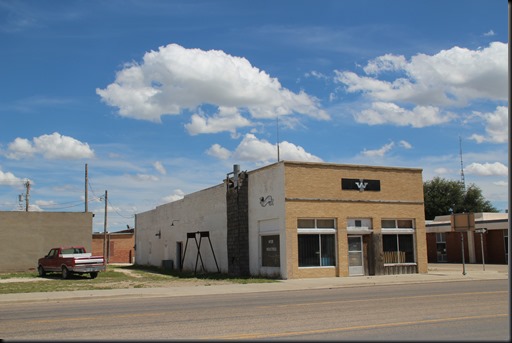 I caught Dr. Wyer working at one of the many machines that filled the shop. 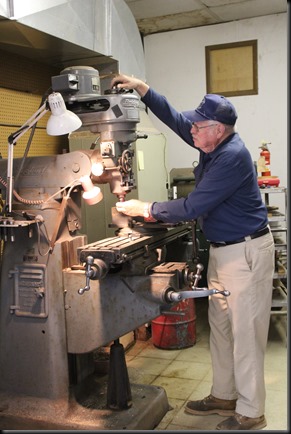 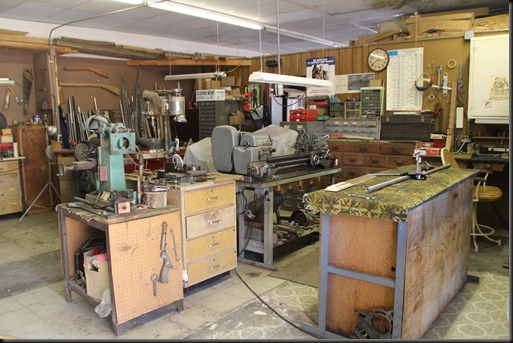 I don’t know what I expected, but this wasn’t it. The last time I had set foot in the place, the owner was Jimmy Crawford who used it as a jewelry store and pawn shop and had reset the diamond in my engagement ring. I found out later the building had had a varied life as a mercantile store of sorts- chickens had been raised and sold there, at some point a new and used furniture store, a dry cleaners, and eventually Crawford’s  jewelry and pawn shop. And now? Now it is the home of a gunsmith who spends his afternoons creating  rifles and muzzle loaders from scratch. And loving every minute of it. 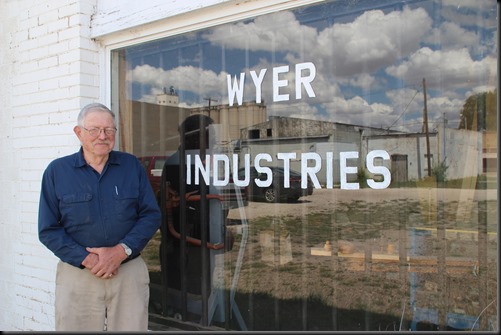 Maybe everyone in town knew that Wyer Industries was all about reloading ammo, repairing and cleaning guns, and making guns, but I didn’t! I knew Dr. Wyer as my boss at one time, as principal at Muleshoe High School in 1989-91. High school principals are pretty much everywhere; gunsmiths, not so much. So I wanted to know how this all came about. And here is what I learned.

Turns out David Wyer was born in Muleshoe in 1930 and graduated from Muleshoe High School in 1948, but not before he enlisted in the Naval Reserve when a senior.  Friends Max Gardner, his brother, and Jack DeShazo had enrolled at Tarleton State College, so he decided he should go there, too. After a semester, he transferred to West Texas State College to be closer to home. After finishing one semester there, he went back to farming with a friend. When neighbor and friend Cecil Davis became ill and needed help, David worked on the Davis family farm. That was also the year he married his wife of these 65 years, Dorothy Waggoner, when she graduated from Muleshoe High School in 1949.

In the early years of their marriage Dorothy took a job at a lawyer’s office and David continued the farming, but also worked in the auto body shop at Guinn’s Body Shop. And this is where the gun-making connection comes in. At some point his dad quit farming and became a mechanic for Muleshoe Motors, and David spent time there with his dad. Muleshoe Motors, back then, had moved from downtown on Main Street to the intersection of Highway 84 and 214, right across from the Crossroads Cafe, which used to be where Muleshoe State Bank (now AimBank) is now. Being conveniently located across the street, dad and son, and probably most of the employees and customers at Muleshoe Motors, would frequent the Crossroads Cafe for coffee and meals. It just so happened that Butch Baker ran the cafe, and Butch ran a reloading (of gun shells) business at the cafe. Butch was, in Dr. Wyer’s words, a varmint hunter, and apparently young David tagged along. Butch eventually got David a nice Winchester rifle and taught him how to reload his spent shells. Having worked for many farmers and ranchers in the area- Johnny McMurtry, Cecil and Melva Davis, the Ivy Boys- David pretty much had the run of their places for hunting. So between hunting, learning the reloading process, years spent learning about mechanics from his dad,  one thing led to another, and before long, he was making guns.

Making guns, however, was not all he did. Back in those days, to be a vocational education teacher, experience was the qualifier, not a teaching certificate, and he had about 18 years of experience.  So in 1967 he landed a teaching job with Lubbock ISD at Estacado High School, eventually going back to school at South Plains College in 1973, receiving a bachelor’s degree from Texas A&M University in 1975, a master’s degree from East Texas State University in 1979, and eventually earning a Ed.D in administration from East Texas in 1987. He then moved to Waxahachie, Texas, and was their vocational supervisor and middle school principal before moving back to Muleshoe to become high school principal in 1989, retiring in 1991.

And all the tools and machinery necessary to his trade made every move with him. 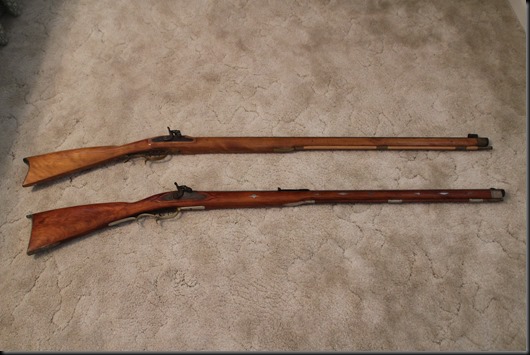 He made this second gun for Rudolph Wiedebush. Pay attention to the silver inlays in the stock. It seems Mrs. Wiedebush noticed she was missing a few pieces of her sterling silver flatware, but I don’t know that she ever made the connection to that occurrence and the decoration on this gun. Dr. Wyer said that while he made the stock, Mr. Wiedebush did the silver inlays. 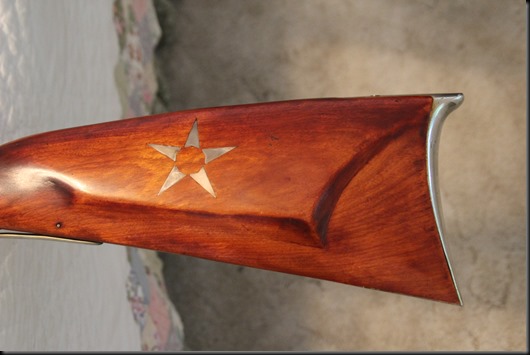 This picture hangs in his office: Ray Clayton, Rudolph Wiedebush, David Wyer from their days of competing at rifle meets and using guns made by Dr. Wyer. 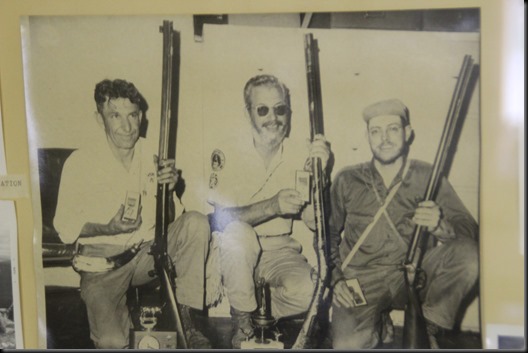 Dr. Wyer said according the US government and the AFT, or the Federales, as he calls them, technically he is a gun manufacturer, and he is inspected from time to time by the Department of Alcohol, Firearms, and Tobacco. The machinery used to make the guns is a story unto itself. I don’t think my pictures will do them justice, but I want to share them with you anyway. 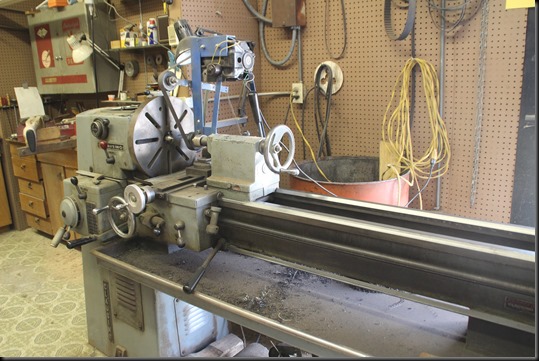 This 48 inch lathe he uses for turning just about anything, wood or steel. 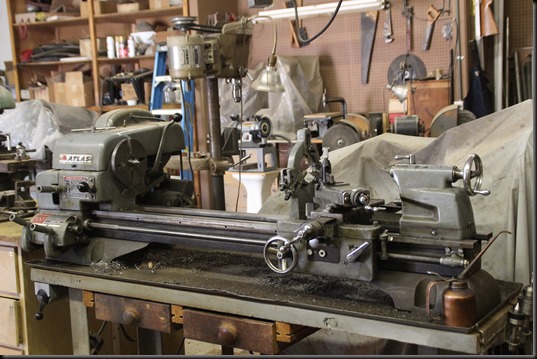 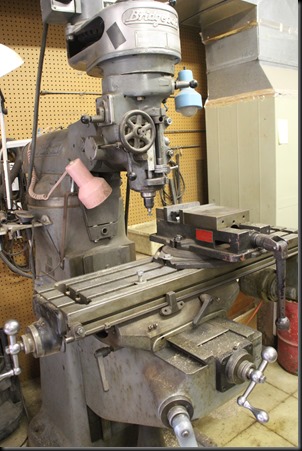 The vertical milling machine is used to remove part of the wood when shaping the stock and is also used to cut steel. 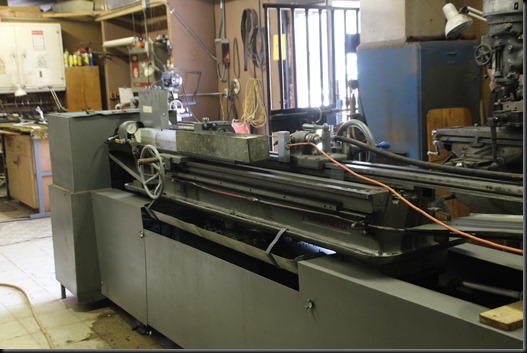 This is one of the larger machines, a Pratt & Whitney deep hole drill and reamer. The left side, shown here, is the reaming side, which makes the hole in the barrel larger. 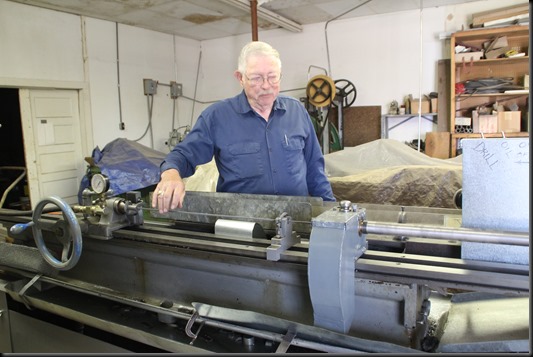 The right side of the deep hole drill, the same machine pictured above, first drills the hole; then the reamer part of the machine makes that hole larger. 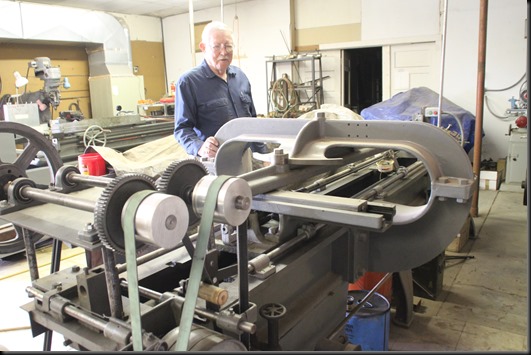 This Diamond rifling machine from Kentucky goes back to either WW1 or WW2. 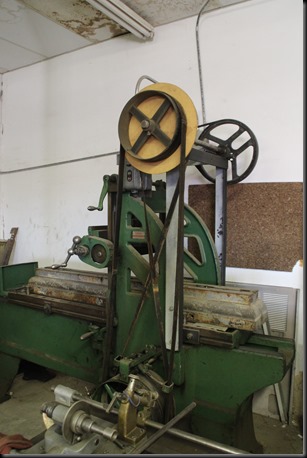 This metal plainer came out of the Texas Tech engineering department and is also used to shape the wood stocks. 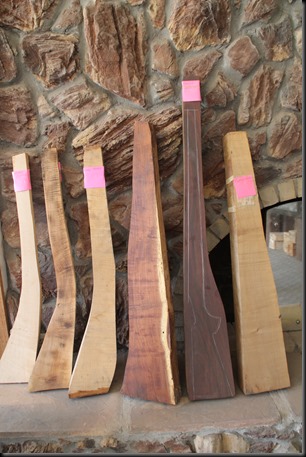 This is what wood stocks, called blanks,  look like in the beginning. Dr. Wyer said that even though those first guns were made from wood obtained from a lumber yard, wood is now bought from gun wood dealers. 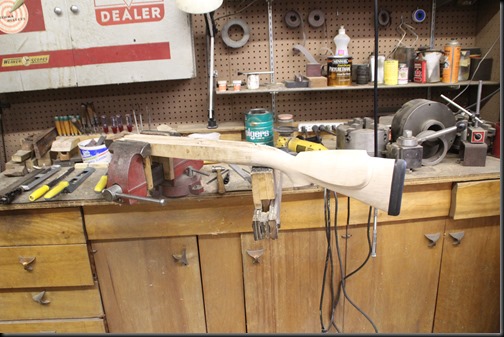 As wood from the stock is cut away by machines, eventually the final shaping is done by hand. 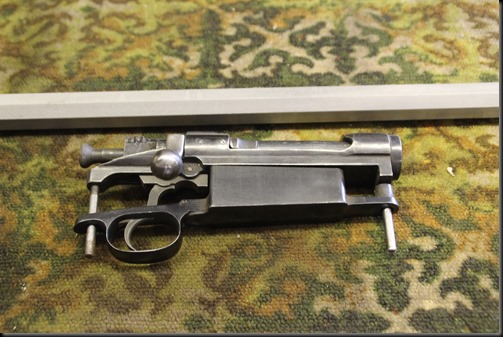 This part of the gun is called the action. Dr. Wyer can make his own, but he says these days he tends to buy used ones and rework them. 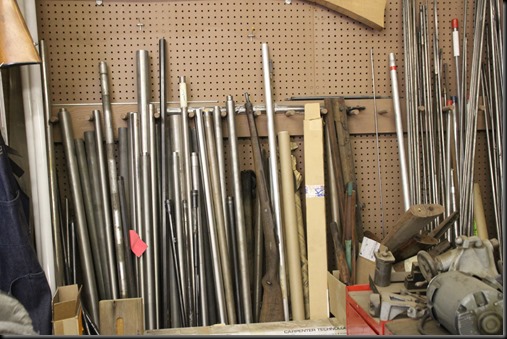 On the left are barrel blanks, and to the right is the steel tubing used in reaming the barrels. 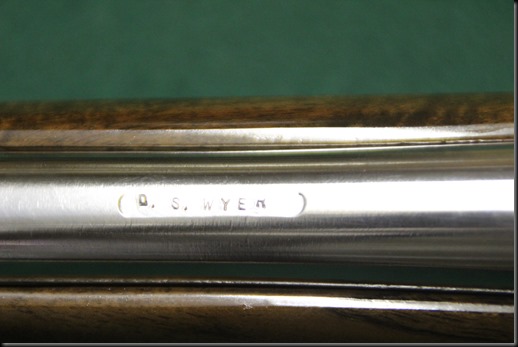 Dr. Wyer, like all gunsmiths, signs his work. His name appears on the barrel of the rifle. 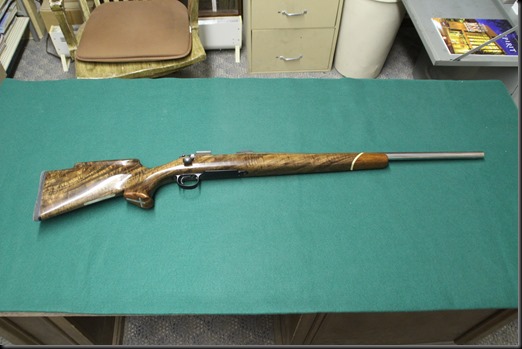 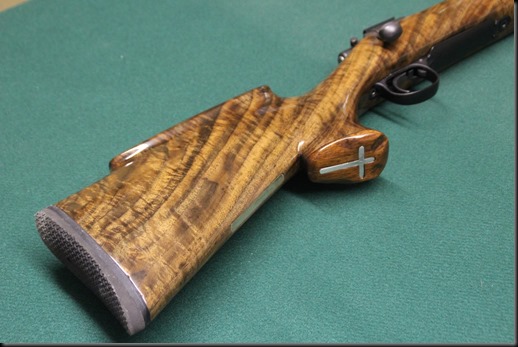 He just completed this 308 caliber, Remington action, Shillen barrel custom California carlo walnut stock for his granddaughter. Beautiful wood is prized by gunsmiths and can get quite expensive, running $350 to $750 and up. Dr. Wyer said his favorite wood is walnut.

I learned all kinds of things about guns, like the fact that maple is the traditional wood of choice for muzzle loaders, Pennsylvania seems to be the state with the most gunsmiths, that the process for making the barrels has gone from cut-rifling to button-rifling to hammer-forged rifling, a process from Germany that takes minutes compared to hours in the past. I also found out that during the Revolutionary War the guns had smooth barrels, meaning the inside of the barrel was smooth. Americans in the 1800s came up with the idea of cutting grooves inside the barrel which stabilized the path of the bullet. The old muzzle loaders had very long barrels in an attempt to make the bullets go straight. Shotgun barrels are smooth; rifle barrels are grooved.

I asked Dr. Wyer how long it takes to make a rifle, and he said about three months, but he always seems to have more than one going at a time, so who knows? When asked how many guns he thought had made over the years, he smiled and shook his head and said he tended to lose count, but maybe 100, plus or minus. He also had a hard time coming up with what one of his custom rifles would cost, and finally said around $2200, compared to $700-$1000 for a mass-produced one.

Recently he found out that gunsmithing actually occurred way back in the family history, as his great-great-grandfather Barnubas Wier making guns in North Carolina. The skill seemed to die somewhere along the way, but there is one grandson who might eventually continue in this grandfather’s footsteps.

I think it must be very satisfying to start with raw materials and possess the skills and knowledge to be able to come up with a finished product as intricate and beautiful as one of Dr. Wyer’s rifles. The old building may not look like much, but what’s inside is definitely interesting and special. After all, not every town has their own gun maker.

You might want to pay the gunsmith a visit sometime.