One Last Look at the Yuccas 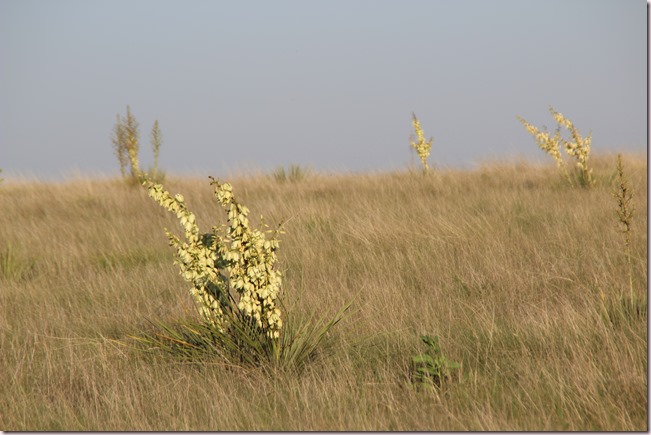 In West Texas and the Hill Country, Spring does bring on wildflowers, but it also blesses us with yucca blooms. Bear grass, they call it here, but yucca is what it is. I don’t know the exact variety, and there are many, but it grows wild here, and if left to its own devices, will take a field that is not under cultivation or kept in shape for cattle pasture. And I know it is a problem in that respect, but when they bloom, they do dress up an otherwise barren landscape. 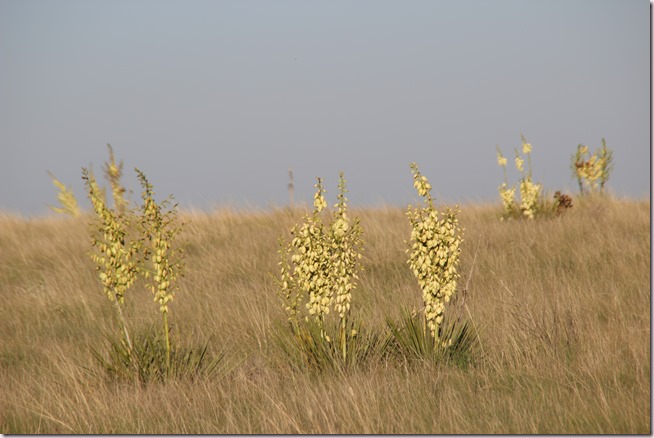 These are in the corner of the field behind us, and I always enjoy seeing them when I walk around my walk path. I didn’t wade through the grass for a closer shot of their blooms, but as you can see they are big enough to make a showing from a distance. 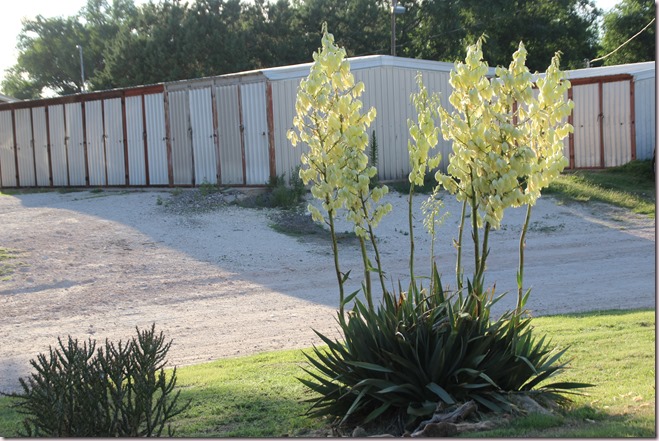 I dug up this yucca years ago in the San Marcos area. At the time, it was just a single small plant, and it has spread out rather than growing taller and has a wider, more pliable leaf than our native bear grass. 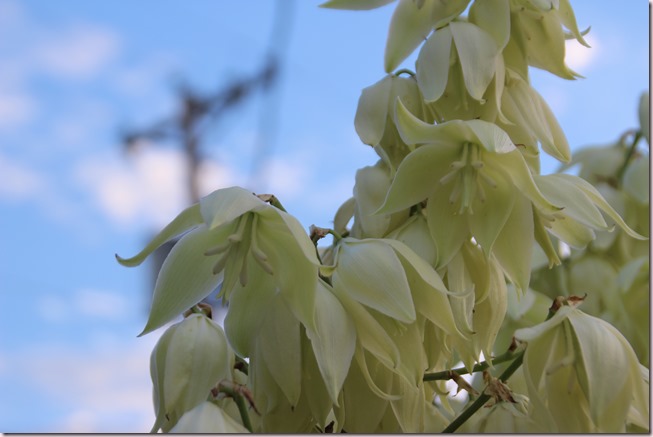 The blooms start out long and slender, and then open to look like this. 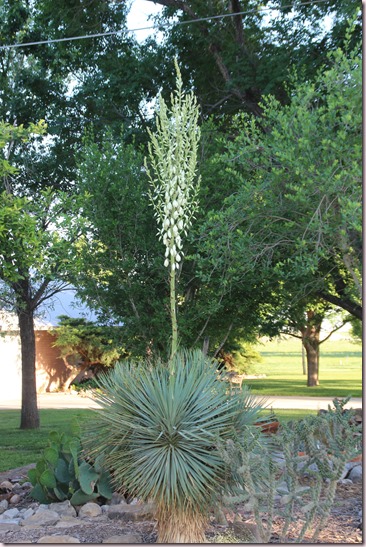 I bought this Thompson’s yucca in Alpine in 2003. The leaves make a nice round shape as it grows taller each year. The blooms toward the top of the cluster had just begun to open when I took this picture. 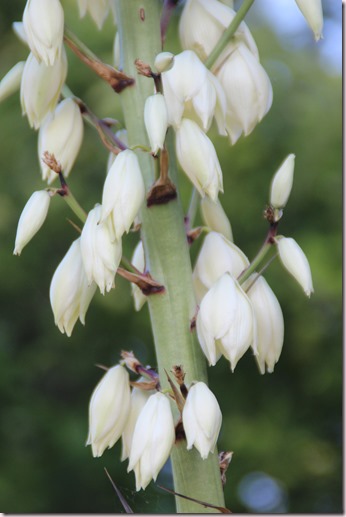 The Thompson yucca blooms are whiter than the San Marcos yucca. 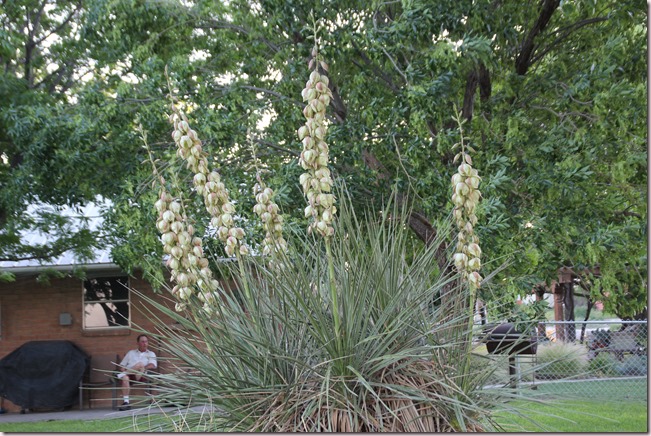 This yucca was actually a hitchhiker in a pot of sotol that I planted years ago. The sotol, unfortunately, has passed on, but the yucca has done well. 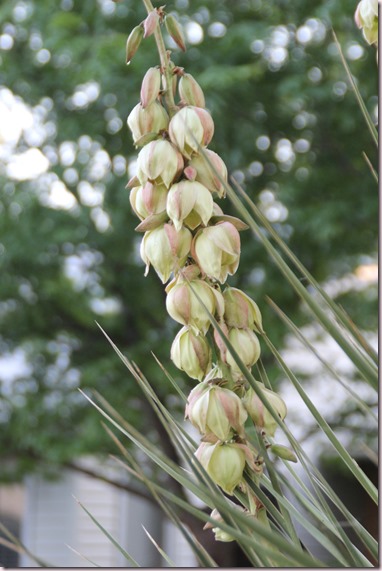 Its blooms are considerably different to the other yuccas in shape and color, with their ball shape and the hint of pink on them. 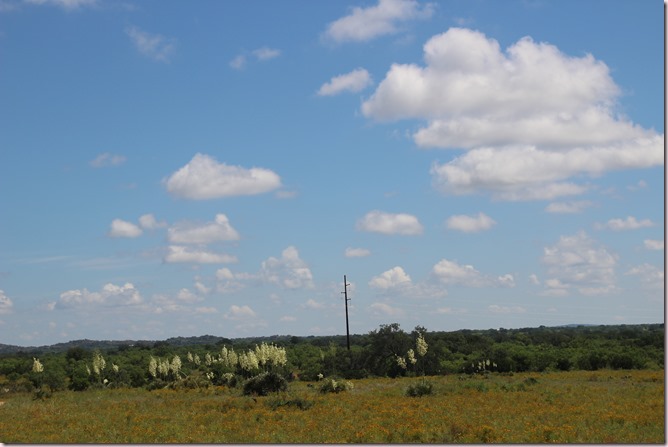 Two weeks ago I traveled to the Hill Country and their yuccas were also in bloom. The much larger wild yuccas commonly called Spanish bayonet or Spanish dagger-I’ve heard both names-had already bloomed in the early Spring and were done. I passed these smaller, more widespread yuccas, on the way from Llano to Mason, and they were so outstanding I had no choice but to come to a screeching halt, go back, and trespass into this pasture for some pictures. Not much traffic on that highway, thank goodness, so I didn’t cause a wreck with my spur of the minute decision to pull over and make a U-turn. 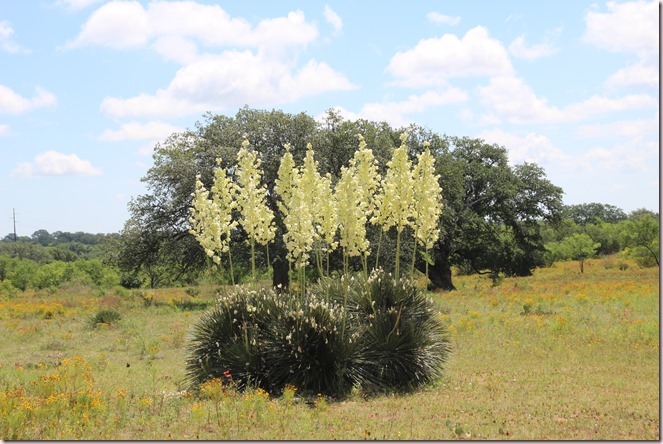 These were especially nice and made quite a statement in the pasture. 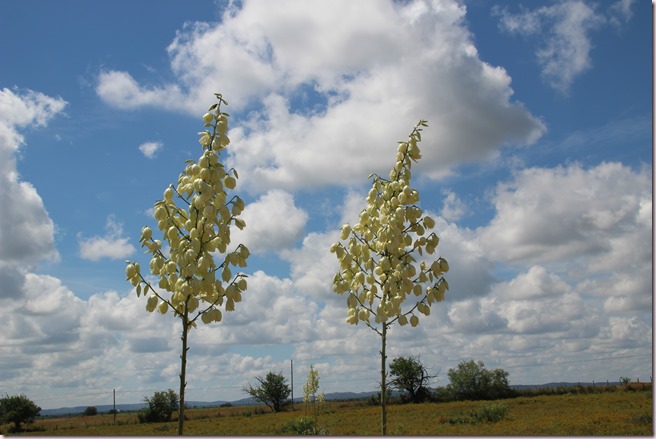 So, bear grass, weed, or whatever, if you have yuccas, go ahead and enjoy their beauty later in the season when the bluebonnets have gone away.