When Bill received notice that the San Antonio office of the Texas A&M AgriLife Extension Service was putting on their bee workshop again this year, like the one he attended last year (“The Bee Keeper Moves the Swarm,” July 27, 2014), and asked me if I would like to go this time, I was more than ready for the road trip. He wanted to reinforce what he learned last year, and I just wanted to learn about the bees so I could help when needed. And considering that the bees love collecting pollen from my cactus flowers, I wanted to learn about them, too. I found out they are quite remarkable little creatures. This road trip took us through Big Spring right about lunch time, so we treated ourselves to a meal at the newly restored historic Hotel Settles. The hotel is a story in itself, perhaps for another time, but you can see here that it is a lovely structure. 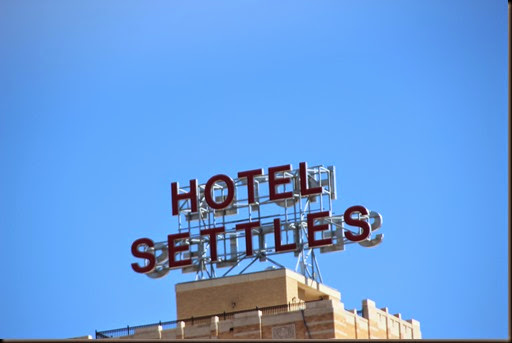 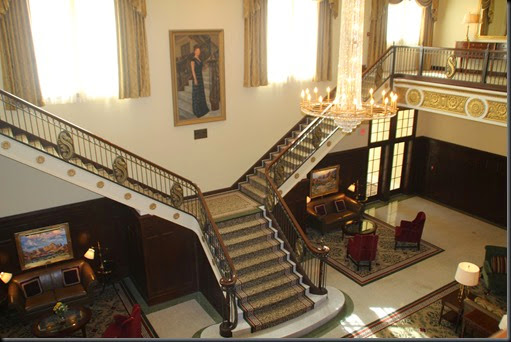 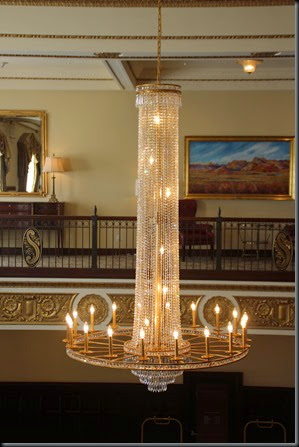 We enjoyed our lunch and continued on to San Antonio, hitting town just in time to enjoy 5 o’clock traffic. 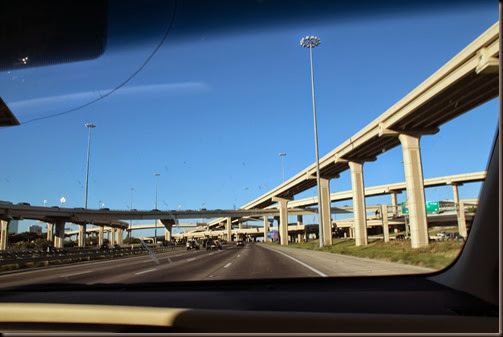 We ate that night at Las Palapas Mexican Food Restaurant, apparently a San Antonio staple with twelve locations, whose sign stated they are closed on Sundays to allow time for worship and family. I found that interesting in a city the size of this one. The tortilla soup was pretty darn good. They served soft corn tortillas instead of flour, which was a bit different. The next morning we drove about a block over from the hotel for the workshop at the Extension Office, led this year again by Molly Keck, David Rodriguez, Mike Cole and son Travis, and Bryan Davis. We spent the day learning all kinds of things about bees. For instance, bees are attracted to the color yellow, so perhaps that explains why they spend so much time on the prickly pear blooms. Honey bees are eusocial insects, like ants and termites, because they take cooperative care of their young, have reproductive divisions of labor, a caste system if you will, and have overlapping generations. Drones mate with the queen, help make the babies; worker bees, well, they do all the work. This is a simplified list, but they clean the cells for the larvae, nurse the babies, store nectar and pollen, and a host of other things. And they have cool little pouches on their back legs where they load the pollen to take back to the hive, and you can see the the dot of yellow if you look carefully. And the queen, well, she really is the reason we have the concept of the Queen Bee. She is larger than the others, rules the hive, is supplied with royal jelly by the others, lays the eggs, and pretty much does whatever she wants. She does eventually die, like they all do, but in the meantime, she’s the diva of the hive. We also learned that bees in Texas are all Africanized, thanks to the African bees that migrated  to us from South America. I don’t remember why or how they came to be in South America. The main difference to native bees is that they are a bit more aggressive, but use of smoke and slow movements when working with them calms them enough to get the job done. Bees in the New England states are more docile because they have not been Africanized yet, and you might see bee keepers there using only the bee bonnets and long gloves when working with the hive. After sampling local honey and realizing they have different flavors depending on where the majority of the pollen was gathered, drawing for door prizes of bee equipment, we adjourned for the day, and we set out on a mission to find Pappadeaux. Couldn’t get the car GPS to work as it was the first time we had even tried to use it, had no luck with my IPhone GPS as I had just gotten it (Can you guess our ages!?) literally the day before, and finding out we had managed to get on the longest feeder road in existence that took us no telling how many miles which finally dumped us on the Bandera highway.We turned around, got back on the 410 loop going the other way, and found Pappadeaux’s. Success at last. And more food than we should have eaten. 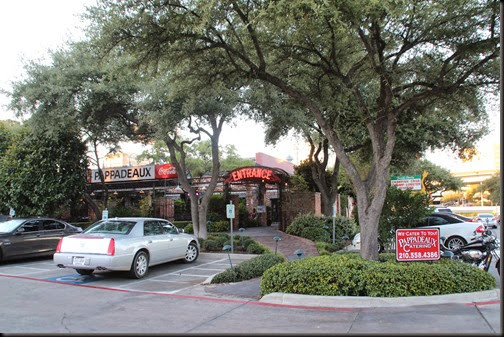 Saturday was the demonstration day, the pay-off. We drove to Mike Cole’s place in Atkins, outside San Antonio, suited up, loaded the smoker, and had hands-on experience with his bee hives. 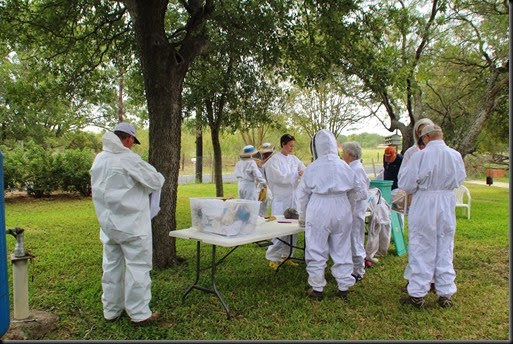 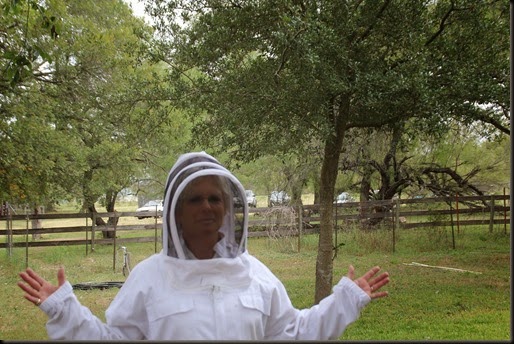 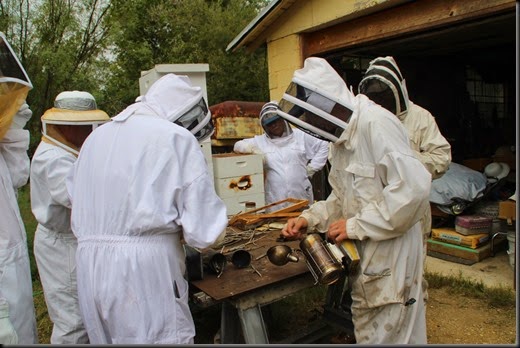 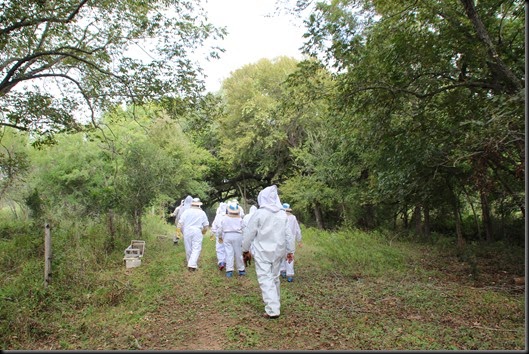 We opened the top hive, and it was amazing how many bees were in there! Mike had several boxes stacked, and with the calming help of the smoke, we checked all of them and found an unbelievable number of bees, honey, brood, and developing larvae. We didn’t ever come across the queen, but she was in there somewhere or it would not have been such a thriving, successful hive. 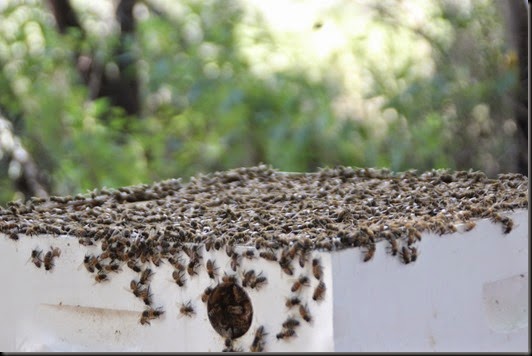 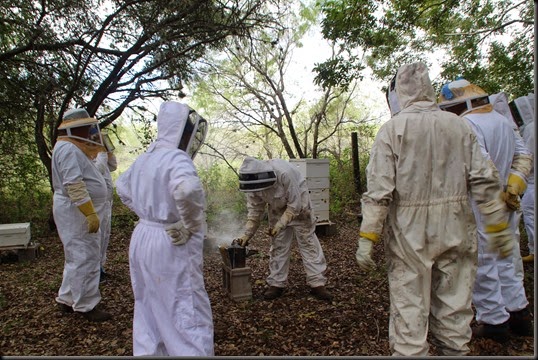 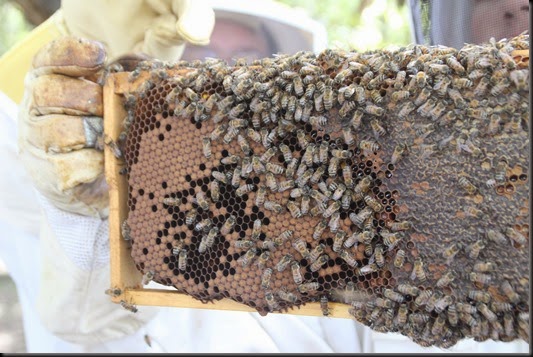 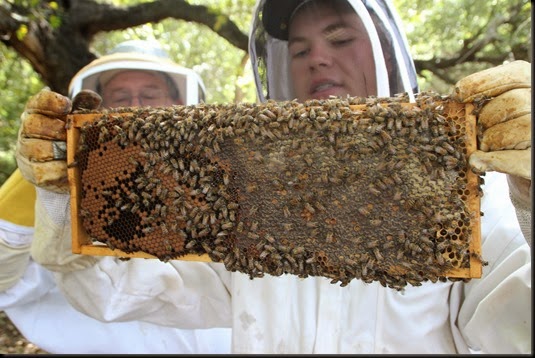 In both pictures of the frames, the dull gold cells on the left are brood cells, full of developing larvae. The black holes are open cells with the developed larvae almost ready to come out. If you look closely at the top picture, you can see a bit of shine in the black cells. That is the babies. The grayish-gold stuff on the right of the frame is actually honey in honeycomb. And I think you can see all the bees moving around on all of it. I know the honey doesn’t really look much like honey at this point. Trust me; that’s what it is. There are ways to get the honey off the comb and into the form you would recognize, but that is another story.  Then the bee boxes were restacked, and we headed back to the house. The suits by that time were getting a bit hot and we had aggravated the bees enough by then. 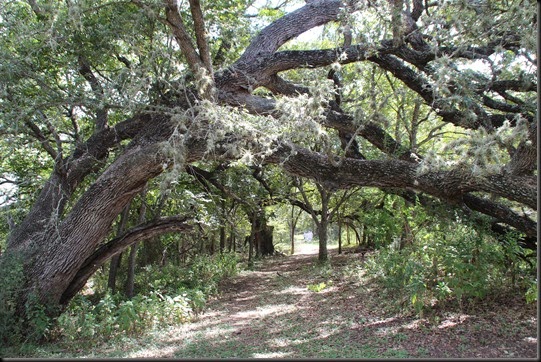 Being a bee keeper really isn’t that hard, and yet there is much to know. I have just scratched the surface here. Even if you care nothing about collecting honey or don’t need the bees for their pollination work, it would be worth attending a bee workshop just to realize how important they are to our ecological system and to appreciate the amazing things they do.  And if you leave them alone, they will leave you alone.