The 9/11 Memorial and Museum 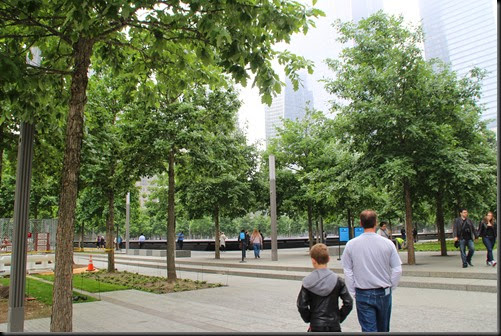 Our trip to New York would not have been complete without a visit to the 9/11 Memorial and Museum. While I mentioned that visit and shared a couple of pictures (“We Did the New York Tourist Stops, Too,” July 6, 2014), it seems fitting and right to spend a little more time on the subject. I fear I will not do it justice; I was so busy taking pictures and being overwhelmed by the history and sadness surrounding me that I didn’t take notes or read all the descriptions as closely as I should have. And I certainly didn’t take pictures of all the displays. Most of that you can read about in other sites on the Internet, so perhaps I can at least give you some insight into what to expect if you have the opportunity to go there yourself. 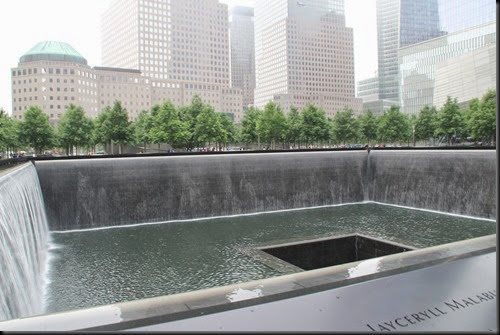 The Memorial is open and easily accessible to the public. In the foundations of what used to be each of the  World Trade Center buildings are two-tiered fountains and waterfalls. The names of those who were lost that day are engraved in polished stone that define the edge of each of the fountains. A young woman was quietly polishing part of the wall when we were there. I asked her how often she cleaned and polished it; she smiled and said, “Every day.” 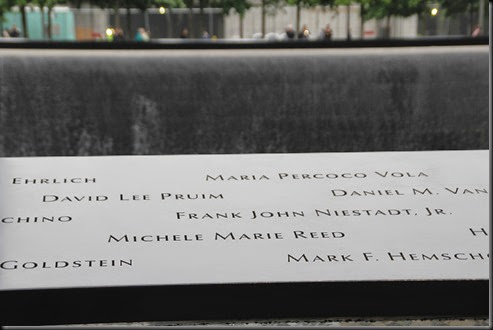 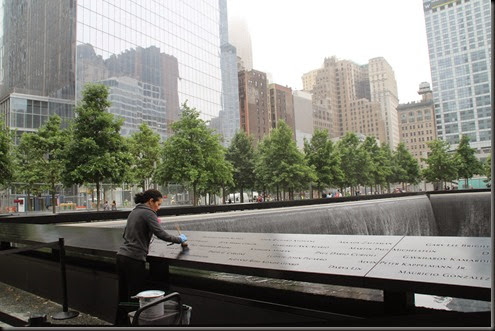 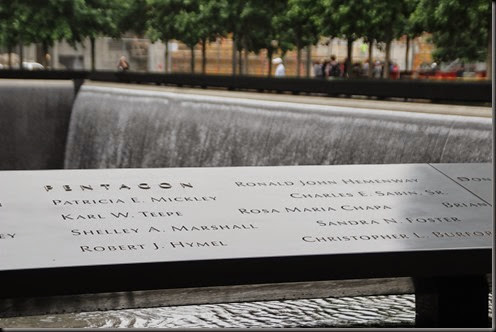 I purchased tickets online ahead of time for entrance into the museum, which is required. Then you have to be there at your appointed time to gain entry. 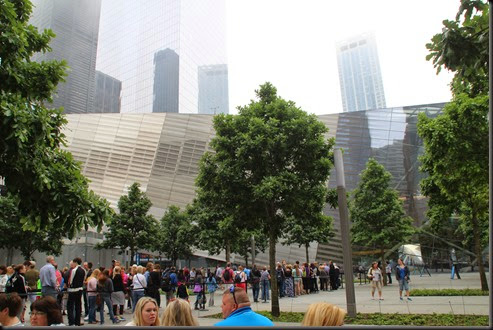 The museum is the building with the slanted roof 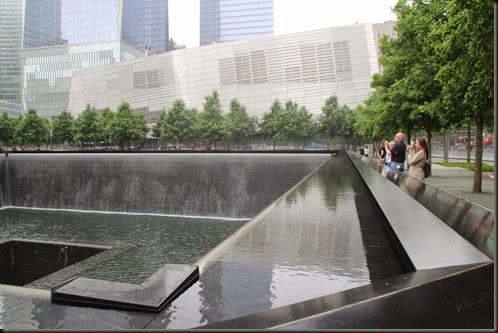 The museum itself is built mostly underground at the original foundation level and is quite large. We toured most of it, but I know there were some parts we missed. And these pictures can’t convey the quiet, disbelief, and reflection felt when you are actually standing where it all took place. As you go in, steel beams from one of the attacked buildings are standing by stairs that lead down into the foundation. 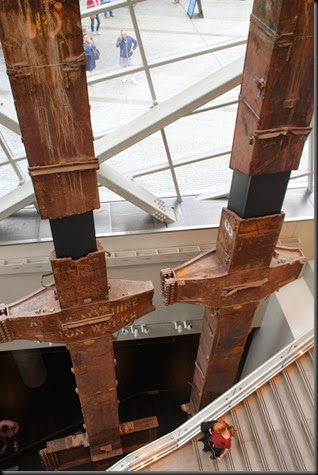 And in a second  location is another set of beams that were hit by one of the airplanes. I had the presence of mind to take picture of the plaque that identified this one. 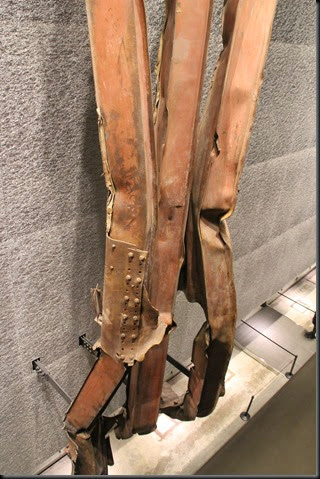 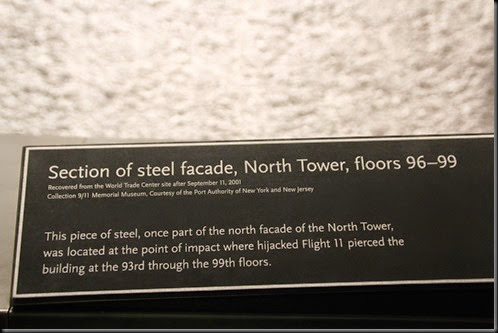 This strange-looking wall is what they call a slurry wall, a feat of engineering to keep water from seeping into the buildings. This a part of the original wall and was left in the museum because it became a symbol of resilience in the months after 9/11. This wall held against the pressures of the attack and kept the water of the Hudson River from flooding lower Manhattan, the subway, and the PATH tunnels (Port Authority Trans Hudson-a mass transit railway). It was not built to withstand an attack but originally to allow the World Trade Centers to be built without seepage from the river interfering with construction. But its strength kept the water out and the havoc that would have made things even worse after the attack. 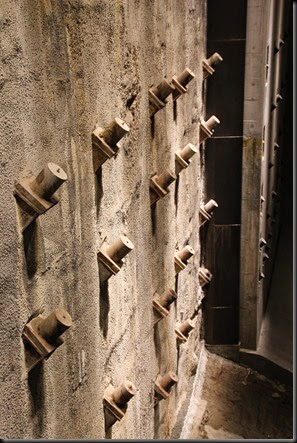 All sorts of pieces from the original site were on display, like this section of wall. I did not identify it, but you can see the memorials and messages left on it by the public. 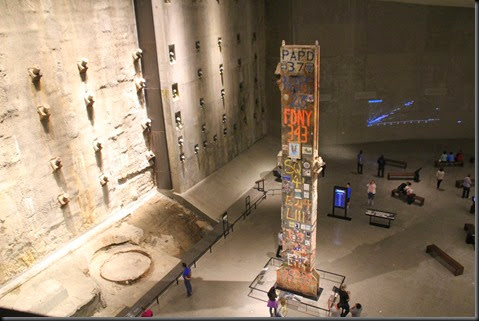 We saw this small Statue of Liberty when we visited New York in 2010 with Colten. At that time the statue was on display in a small museum near the attack site. I thought surely she would be here, and as I turned the corner, there she was, quietly paying homage to those who sacrificed to save others. 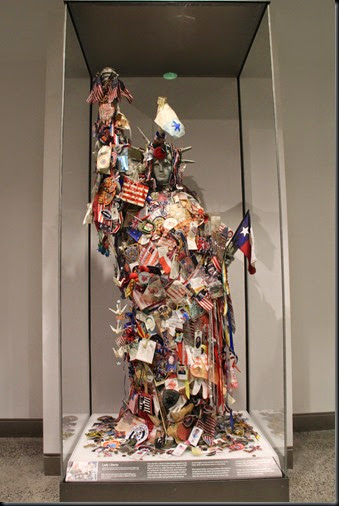 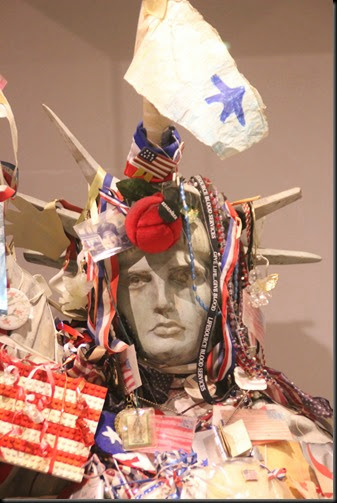 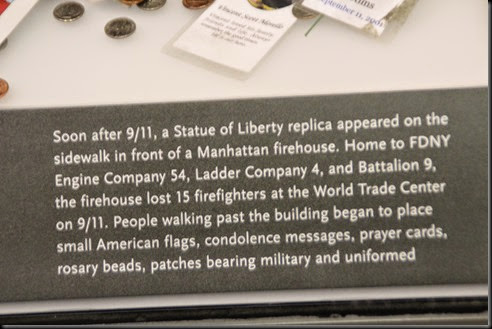 Alas, I did not get a picture of the second half of the plaque. As I recall, someone was standing in front of it, and something distracted me before I moved over to the second half. But you get the idea. There were other items deemed worthy of display that played a part in the aftermath of the attack, like a section of stairs called the Survivors’ Stairs that led people to safety after the attack, and this fire truck 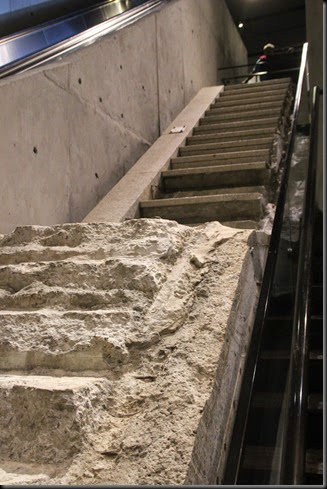 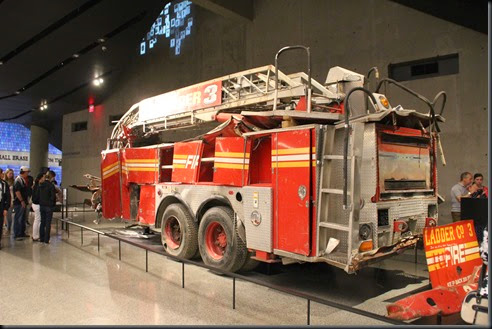 And then there were many pieces sent to the city of New York as a way of expressing condolences and support, like this hand-fashioned tapestry. 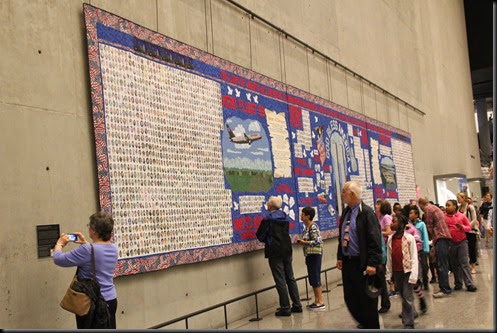 So if a trip to New York is in your future, plan ahead, order museum tickets, and be prepared for an emotional visit. 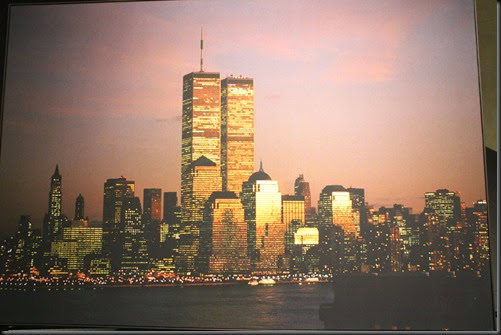 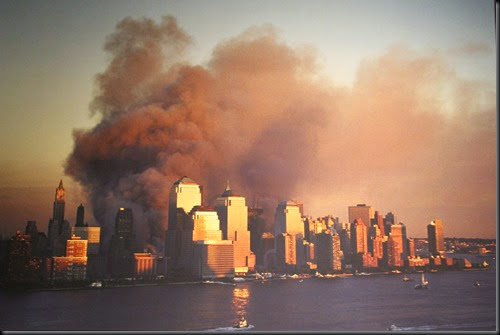 For more information about the slurry wall, go to: www.nytimes.com/2013/09/12myregion/looking-to-a-wall