A Toad in the Dish Garden 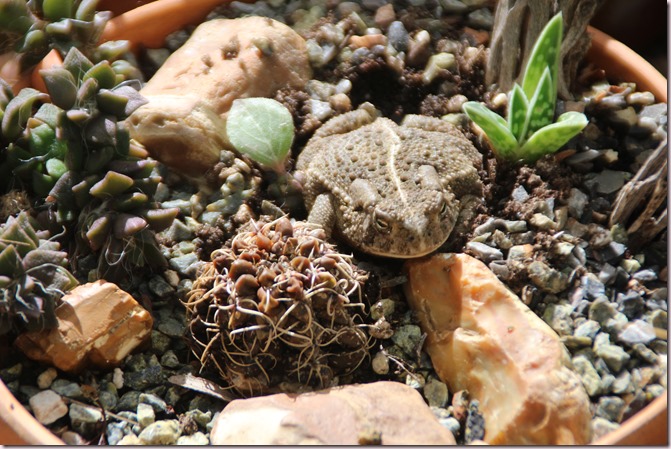 I was checking on a little cactus that was not looking too perky and had this feeling that I was being watched. And I was! Hunkered down in the gray-blue gravel, this mid-sized toad was quietly watching me,  no doubt hoping I would overlook him in his comfy little spot and just move on. Delighted to see him there, I ran for the camera and began taking shots from different angles to get just the right image of him. He obviously didn’t like that because after about four snaps of the camera, he jumped out when I moved for a different view, and I lost track of him.

I like putting trinkets and little animal figurines and other things in my dish gardens, sort of like creating a diorama or still-life arrangement, and the extra touch adds interest to the landscaping of the little garden. But to have the real deal! Well, that was just too cool.

The first time I discovered the toad living in the dish garden was May 29. Then three days later, on June 1, lo and behold, he was there again!

So if you are tempted to buy one of the cute little structures labeled toad houses, don’t bother. I have a feeling your toads will find their own homes, thank you very much!