You lie and plot, that’s how. And oh, what a tangled web was woven. Right off the bat things were more complicated because Lonnie Adrian had made plans not to attend the Muleshoe Chamber of Commerce banquet, but to travel to Liberty, Texas, to build  playground equipment for two of his grandchildren. The first lie was for his daughter Gradee to tell him that they shouldn’t come that weekend because the kids were sick. That wasn’t enough to stop him. So the next lie was from Gina Wilkerson, Chamber president, who called and told Lonnie that his wife Hellen had been named woman of the year and would he see to it that she was in attendance. So even though he fumed that he wasn’t getting to make the trip to Liberty, he then had to come up with a way to talk Hellen into going to the banquet, as they had not been in recent years and he wasn’t sure she would want to go. So then Lonnie lied and told Hellen that they needed to go to see good friend Juana Shelburne get some award, which was not going to happen.  We even invited them to go with us. The big night came, and after not wanting to go in the first place, Hellen had to rein him in to keep him from getting there too early, fearful of getting a glimpse of  both daughters and their families taking cover in the Bailey County Coliseum green room to hide until the award was presented. The arrival and hiding worked out, and Lonnie was none the wiser. Lonnie and Hellen sat with us and we were all pleasantly fed by PJ’s Catering From the Heart from Tahoka and entertained by Minnie Pearl and the Grand Ole Opry band from the Cactus Theatre in Lubbock while waiting for the big moment for Lonnie. When the time came, the Woman of the Year, Peggy Bates, was honored first. Lonnie looked a mite bewildered, but didn’t put two and two together until he recognized himself as Gina began the Man of the Year presentation and listed his accomplishment and even mentioned that he thought he was bringing his wife to win something. He nudged Hellen, and there it was. The surprise had been pulled off successfully. 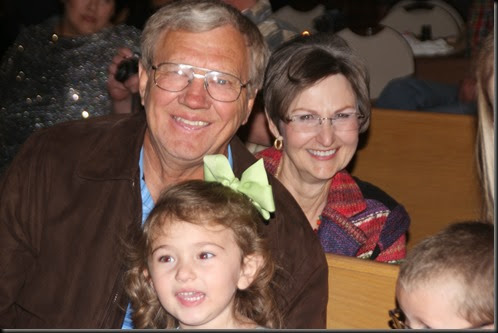 And all those things that won him the award? Well, heading up the Tour de Muleshoe bike ride every year as a fund-raiser for the Muleshoe Heritage Center is a big one. Serving on the Heritage Center board of directors as well as on the chamber board were two more. Lonnie also helped organize the Muleshoe Roadriders motorcycle club and has worked hard to keep the group and its Roadriders Rally up and running. 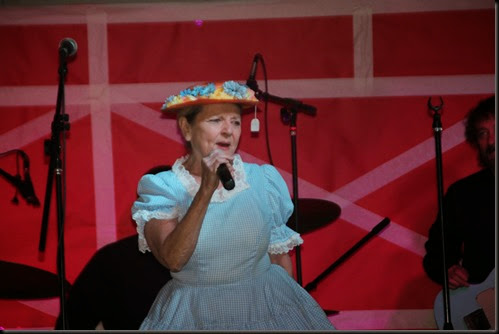 Between the presentations and songs and music from the band, Jane Prince Jones regaled the crowd with classic and corny Grand Ole Opry jokes, eliciting  as many groans as laughs.  But she sort of brought the house down with the tale of eating the buckshot-laced tapioca pudding, which seemed fine until she bent over to pet the cat and shot the canary… 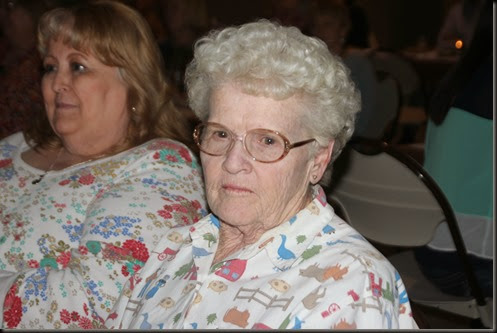 As I mentioned, Peggy Bates was named Woman of the Year for her work at the Heritage Thrift Shop. And she was pleased to win the award; I just caught her in a pensive moment when I took this picture. Or maybe she was trying to figure out one of Minnie Pearl’s jokes. 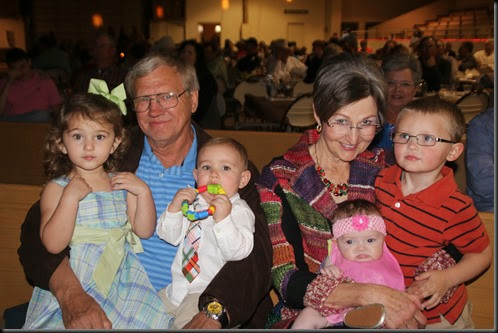 Lonnie enjoyed the rest of the banquet even more after all the grandkids came out of hiding to join him: Teegan, Parker, Taylor, and Cayden. Besides naming a man and woman of the year, the Chamber also honored a Farm Family of the Year, this time the three families that make up 3G Farms, the Giesbrechts: Kendall and Michelle; jerry, Sonya and children  Jeremy, Alex, and Kara; Craig, Ashton, and son Blake.  The Business of the Year was the EMS crew. Bob Donaldson was named Employee of the Year. Nancy Kidd won a Cactus Theatre gift certificate donated by Don Caldwell and the band for her lovely version of Minnie Pearl’s hat. Around 395 people attended, the silent auction brought in $2400, and a good time was had by all. So next year if you get an unexpected invitation to the Chamber of Commerce banquet, you might want to go without a fuss. There might be a surprise waiting for you.