The Voice of the Mules on Friday nights will not be the same next football season; half of the Bob and Ronnie team will be watching from the clouds. Ronnie Jones passed away January 22, 2014.

Ronnie grew up in Oklahoma and briefly in Texas, moving back to Texas and Muleshoe from Snyder, Oklahoma, in 1964, which explains his devotion of the OU Sooners. After all, he is from Oklahoma… 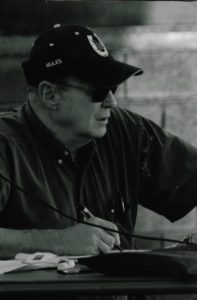 But he was also one of the Muleshoe Mule faithful, having taught and coached in the Muleshoe ISD system for 37 years, also serving as assistant principal at Watson Junior High. I worked with Ronnie when I taught at the junior high. He taught Texas history, which tied in nicely with his interest in cowboys, the West, and western movies. I guess next to the Sooners and football, his favorite things in life were John Wayne movies and history. His collection of John Wayne movies and memorabilia is legendary and his ability to retell the plots and share details about them was also amazing.

As I took my seat in the First Baptist sanctuary before the service began, I was almost surprised that we weren’t watching a John Wayne movie on the video screen; after all , it would have been fitting. Maybe that didn’t happen because it was too hard to narrow the choices to what Ronnie would have chosen, had he had the chance. As stories were told of Ronnie’s and his Uncle Bob’s (Bob Graves, the other half of the Voice of the Mules) penchant for being, as Stacy Conner put it, the worst best fans of the Sooners, heads nodded in agreement as chuckles of recognition filled the air. The Sooners always needed another quarterback, a new coach, a stronger defense, whatever. And yet Bob and Ronnie would defend them to the end.

So as we filed by Ronnie’s casket, covered with Sooner red and white flowers, to pay our last respects, and Willie Nelson was singing “ My Heroes Have Always Been Cowboys,” it was only right that in his hands was an OU cap.

So, to  borrow a phrase from another old cowboy, Happy Trails, Ronnie.

-And give our regards to Duke.

My thanks to Bob Graves for helping with this story.