And Speaking of Texas Aggie Traditions…

When the Aggies lose a football game, another way the 12th Man supports the team is hanging around for a yell practice, since apparently we didn’t yell enough during the game. The Yell Leaders choose appropriate yells, lead the singing of “Spirit” instead of the “War Hymn” since the game is over and we didn’t wage enough war,  and then we leave. From time to time this causes problems, like it did one year after Texas Tech managed to run up the score before we ran out of time….and in their shock of winning the game, some overzealous Tech fans stormed the field, pulled down the goal posts-which I have never understood-seems like vandalizing your own field. And no matter how big the game we might win, at Kyle Field or not, Aggies just don’t do that. But I digress. Anyway, the goal post came down, the fans managed to drag it over to the Aggie student section, flopped it into the crowd, and all hell broke loose. All we wanted was a little respect and the chance to finish the Yell Practice, but tempers flared, punches were thrown, disagreement ensued over who started the brouhaha, and the TV sports talking heads had a field day with it. I don’t think the controversy was ever solved to anyone’s satisfaction, but the tone was set, and the rivalry continued until A&M moved to the SEC. So if you ever attend an A&M game and see the Aggies lose but fans remain in the in the stands, please remember your sportsmanship and give us a hard time after Yell Practice. 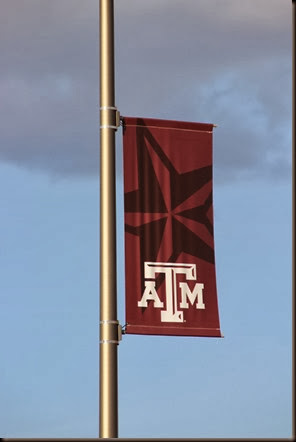