A blue norther, now days called a cold front, hit last Thursday, November 21st, bringing light sleet. Friday was really cold, Saturday and especially Sunday night brought anywhere from eight to twelve inches or more of snow. As you may remember, I grew up on the Gulf Coast of Texas where it consistently snowed about once every ten years, and still follows that schedule as far as I can tell. And then it was wet, not very deep, and only lasted about a day. So for me anything over three inches creates alpine conditions which invariably seduce me into bundling up, kind of like the little brother in A Christmas Memory, and trudging outside for snow pictures. This snow was no different, plus these two dogs just insisted on getting out in it to make yellow snow,  to play, and to hunt for that elusive jackrabbit who teases them unmercifully. So I thought I should share some of those pictures with you. 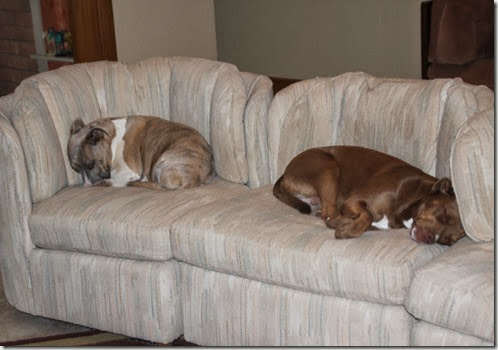 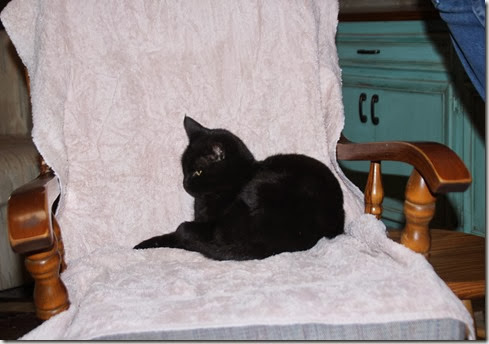 Thursday and Friday all the little darlings were content to curl up and stay warm in the house. It doesn’t show in the picture, but Peaches commandeered the chair in front of the fireplace. 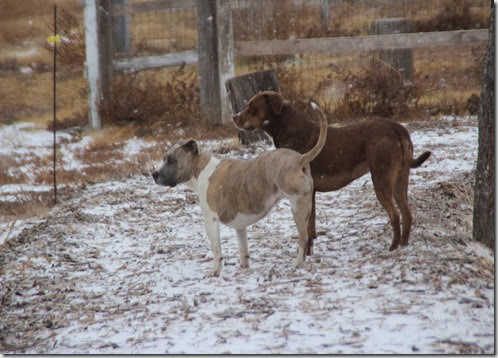 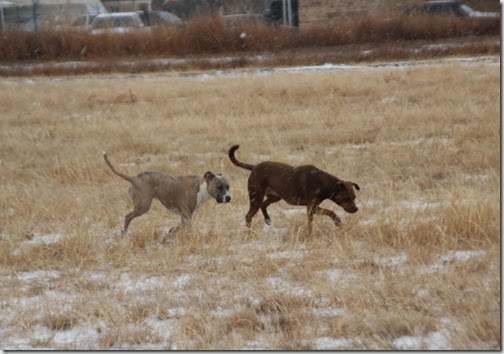 Saturday brought a light snow and sleet. Porche and Mari decided we needed to walk in it anyway. Sleet had piled up, but not much snow yet. The wind was terribly cold, but it wasn’t a bad walk. 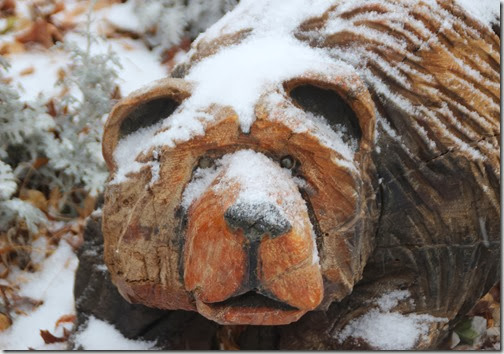 Everything was appropriately dusted with light snow and sleet, as was our carved bear. And then Sunday morning we woke up to a world of white. 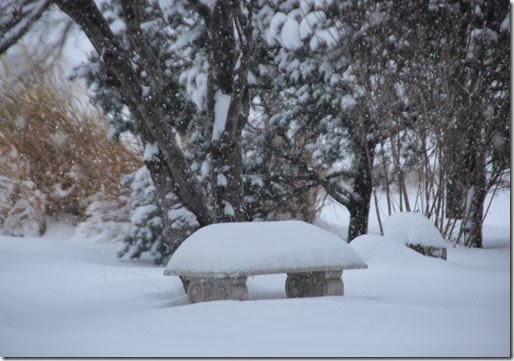 So I bundled up again, two layers thick, and out we went again. This time, in the immortal words of Elmer Fudd, that waskically wabbit showed up but the dogs didn’t see him. He saw them, however, turned and bolted away in my direction, and headed right at me! No fear. I wanted to catch him mid-air leaping through the snow, but since he came right at me at rabbit-warp speed, I was lucky to get this shot before he passed me. 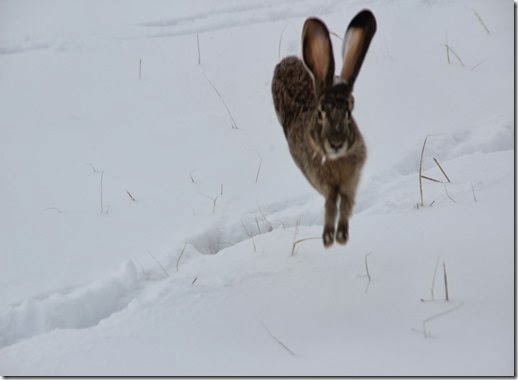 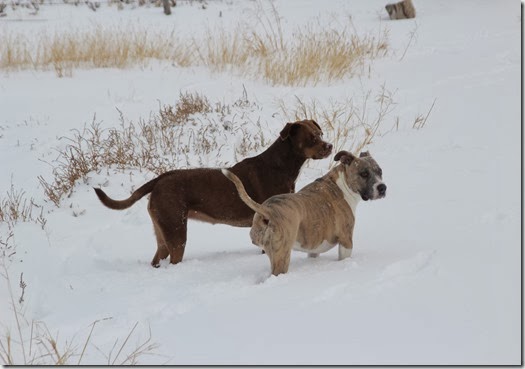 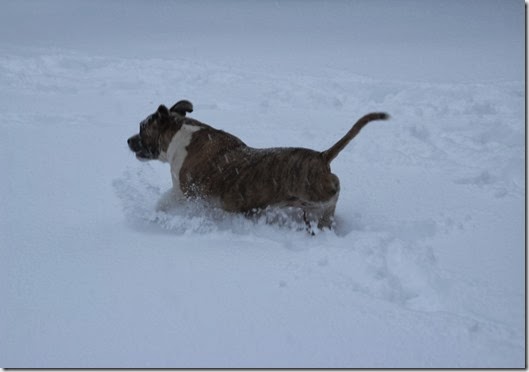 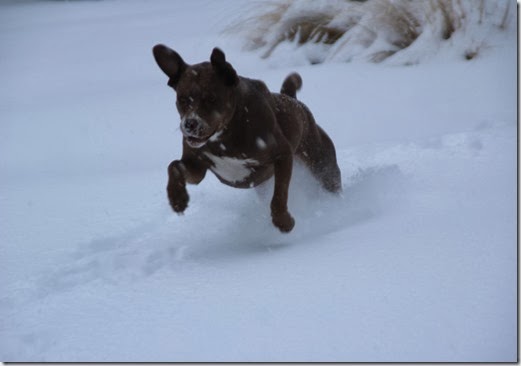 Porche had little trouble navigating in the snow, but the snow came up to Mari’s tummy, and she had to work harder to get through it. That didn’t seem to affect their delight in racing about, sniffing for rabbit scent or whatever else they might happen upon. 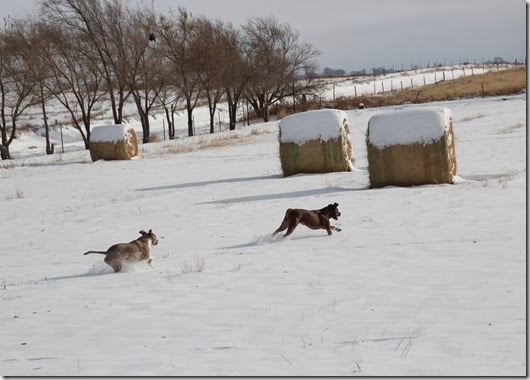 Today is the fourth day of the snow and the sun has finally come out. Out we went again. This time the maneuvering was a bit different, as the top of the snow had started to melt, wasn’t as deep, but had crusted over on top during the night. As the dogs walked their foot would be momentarily held up on the crusted top layer and they they would fall through, and their progress looked a bit choppy. Neither one of them asked to go in, though, so we wandered around long enough to flush out the rabbit again, and once again he evaded them. 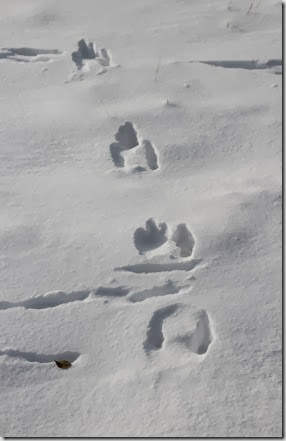 Rabbit tracks are easy to distinguish from the dog tracks because the rabbit glides along on top of the snow and as he jumps his feet drag like this in the snow. 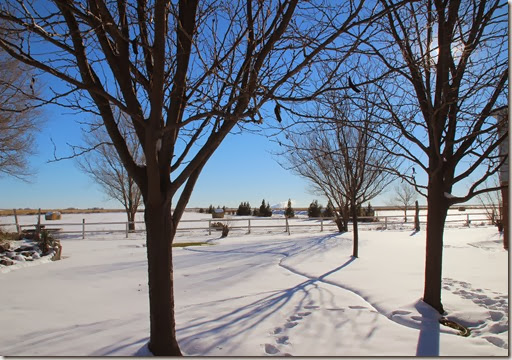 The sun is out, the snow is still sparkly and beautiful, but the melting has begun. Messy as it will be, the moisture it creates is most welcome. And the dogs and I enjoyed it, so I’d say the inevitable mess will be worth. 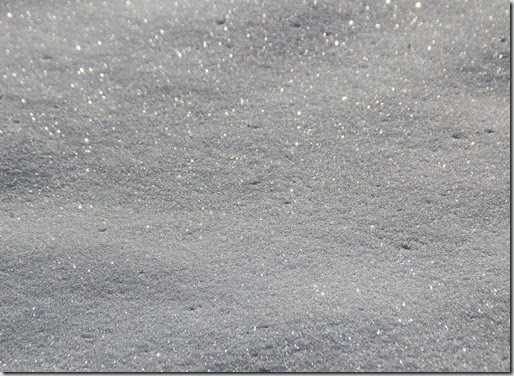 And if it snows again, we’ll be seduced all over again and go out in search of diamond dust and rabbits, and it will be just as much fun as the first time we ever did it.