A Legacy of Hunting

My daddy was born in 1913, third of six children, to a family who had to scrape to survive, and at a time when hunting could mean the difference in dried wild plums or meat for supper. So he grew up with a rifle in his hand and an appreciation for the bounty provided for the person who was willing to do the work and seek out the game. He became quite skilled, knowledgeable, and successful  at hunting.

Time passed, Daddy and Mother married and had a nice little family. Two daughters were just right because to a man who grew up in a large family where there never seemed to be enough of anything to go around, and where he was the son singled out of the five boys and one daughter who was expected to work, hunt, quit school, whatever it took to help keep the family going, large families implied ignorance and poverty. He build a successful pipeline construction business and provided well for his happy family. And he did not have to hunt to put meat on the table.

But hunting had become a part of his internal being. Far from being a chore or an obligation, it now became a favorite pastime that provided the pleasure of experiencing nature, the camaraderie of hunting with friends, the challenge of tracking the quarry, and the skill and thrill of making the clean kill shot. In his lifetime I think he must have shot just about anything edible- squirrels, rabbits, wild turkeys and hogs, even opossums and armadillos were mentioned once, but he said they weren’t very good to eat. Deer and dove were his favorite challenges and also the best game in the eating department.

He tried to make a hunter out of me, and I did take down a doe on one hunt, but my heart just wasn’t in it. I remember the adventure of the tracking and the adrenaline rush of the fatal shot, which I was able to make a clean kill shot, but that was the extent of my hunting career. I had no trouble carrying on Daddy’s athletic attributes,  but I just was not a hunter.

Mother, however, enjoyed dove hunting with Daddy, which I always found an interesting contradiction in her constitution. She was scared to death of my horse, was a gentle soul in so many ways, but delighted in blasting doves with Daddy. She had her own gun, a  nice .410 gauge shotgun, generally simply referred to as a 410. Bill was never keen on hunting. He grew up with the standard, at least in those days,  boyhood BB gun and later was given a .22 caliber rifle by his great-uncle Ray Schmidt, who lived in Brownfield, and has an interest in and appreciation of guns, but had a mother who was a keen fisherman, so hunting was not the focus.

The two guns were passed down to our son, AJ, who did shoot a few snakes and prairie dogs, but was never exposed to much serious hunting. When Caroline’s son, our grandson Colten, came along, Bill asked for the gun back from AJ and taught Colten how to shoot with it. And last Christmas Bill asked  for the gun back again and passed it on to our other grandson, Ben,  who had his own BB gun, but was now given more instruction using the heirloom 22 by his dad, AJ.

During this time and over the years.  AJ has developed a real love of hunting. He, like Daddy, likes getting out in the wild outdoors, enjoys the thrill of the hunt, and like his granddad, knows that if you shoot it, you eat it. Shooting just for the thrill of killing is just wrong, and is, like Atticus Finch declared about killing a mockingbird, a sin. So now  AJ, who inherited his grandfather’s deer rifle (“The Deer Hunt,” November 30, 2010), has acquired a place to hunt, and is teaching Ben about hunting and guns and nature.

And guess what? Ben is going to carry on the family tradition. 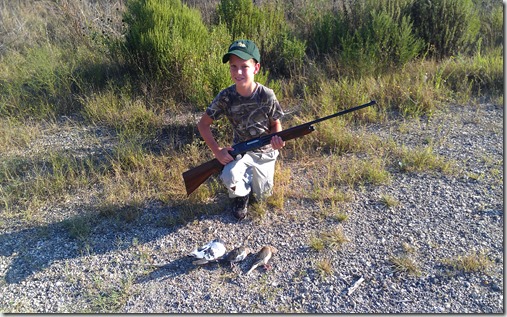 We gave Mother’s 410 to AJ, and he gave it to Ben. Ben went on his first dove hunt at the beginning of this year’s dove season. He used Mother’s shotgun, a pretty big gun for an eight-year old, and did quite well, as you can see in the picture.

The hunting tradition is also being added to the extended family since Caroline’s husband comes from a hunting background. Neil added to the tradition by giving Colten a rifle and a hunting bow and introduced him to trap-shooting.

What was born of necessity turned into a family legacy. Proper care and cleaning of the firearms; continued instruction in gun safety; appreciation of nature and its bounty; respect for the power of weapons; the importance of responsible sportsmanship: worthwhile values to pass down from generation to generation while also putting food on the table. Kind of sheds a new light on the right to keep and bear arms.

Thanks for laying the foundation, Daddy.