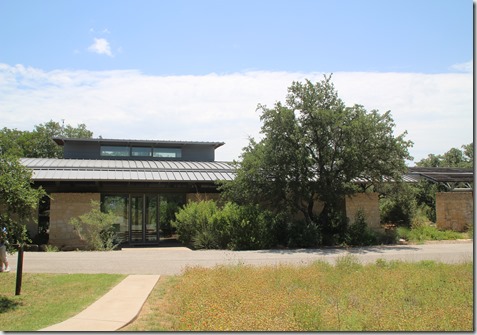 Last week I attended the 35th Biennial CSSA (Cactus and Succulent Society of America) Convention in Austin. Besides the plant sales and informative presentations by international cactus experts, one day was devoted to field trips to area destinations deemed of interest to convention attendees, many of whom were from out of state as well as out of the United States. The choices were visiting Lady Bird Johnson Wildflower Center in Austin, Pedernales Falls State Park in Johnson City, San Antonio Botanical Garden in San Antonio, Enchanted Rock State Natural Area near Llano, and my choice, Westcave Preserve at Round Mountain. 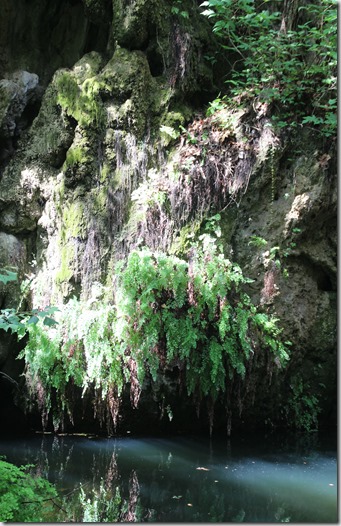 Westcave Preserve covers 75 acres in southwest Travis county. The site includes grasslands and a sheltered limestone canyon that ends with an unexpected limestone cave and small waterfall. In the past the site was discovered by picnickers and trespassers, used recreationally, and abused along the way. Stalagmites and stalactites were broken off, fragile flora were destroyed, and the place was littered. Then in 1976, John Covert Watson established the nonprofit Westcave Preserve Corporation, and in 1983 a partnership was formed with the Lower Colorado River Authority to manage and sustain the site on a 99-year lease agreement, so the land is now is good hands. This is the short version of the history of the place; if you would like more specific information, go to their website at www.westcave.org 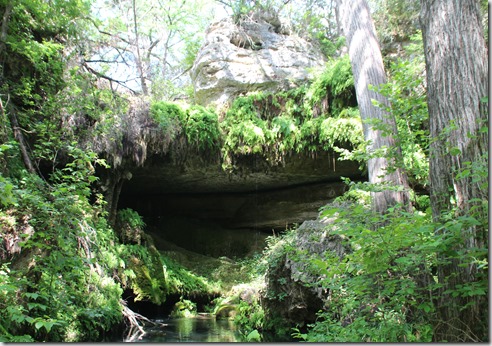 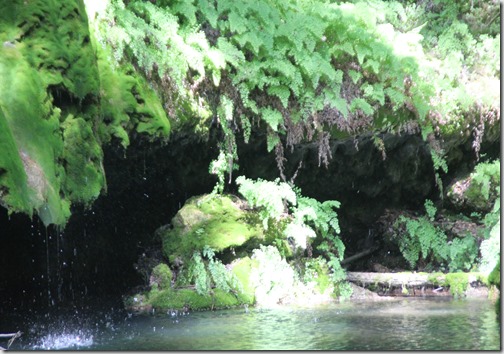 Not much water was falling at the waterfall, due to the drought, no doubt, but it was still a wonderland of maiden hair fern and moss on the rocks from all the moisture. 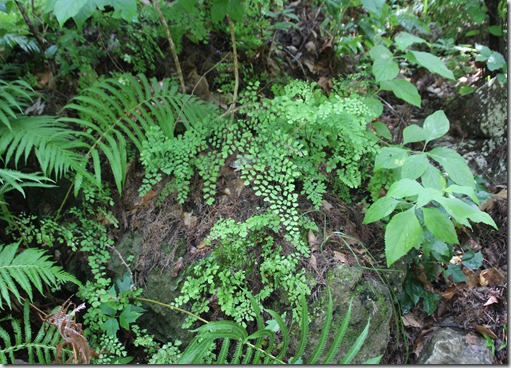 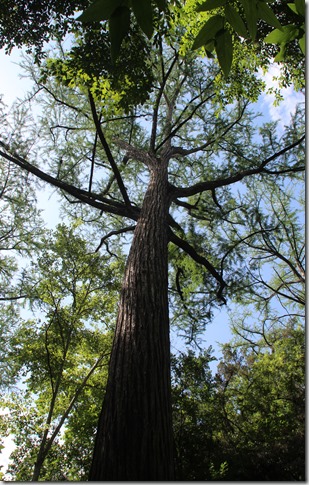 This cypress tree is thought to be about 350 years old. 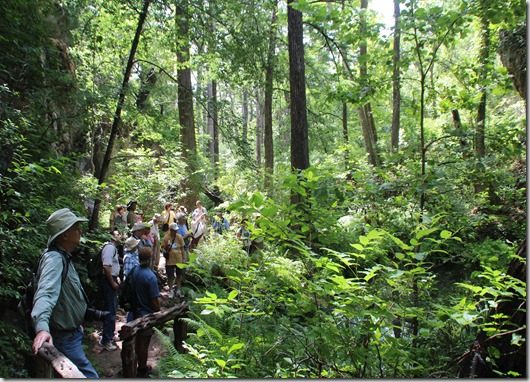 The hike down into the canyon to the waterfall and cave is by guided tour only. 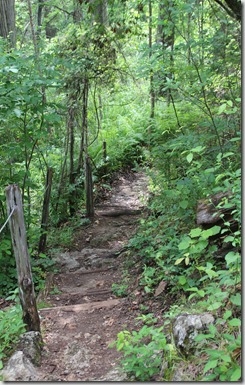 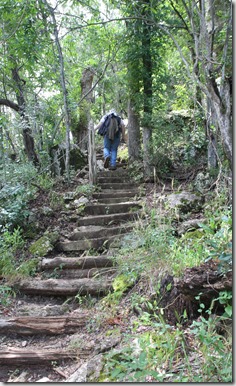 The trail became a bit steep in some places, but a hand rail wire was helpful. The way it was built with the logs for steps reminded me of the trail in the rainforest on Mount Kilimanjaro. 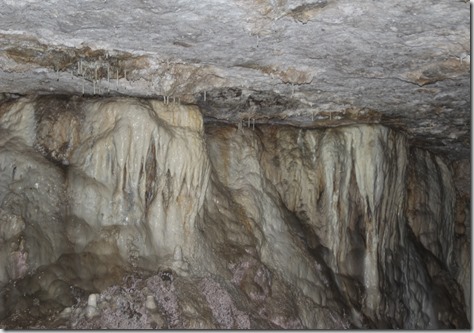 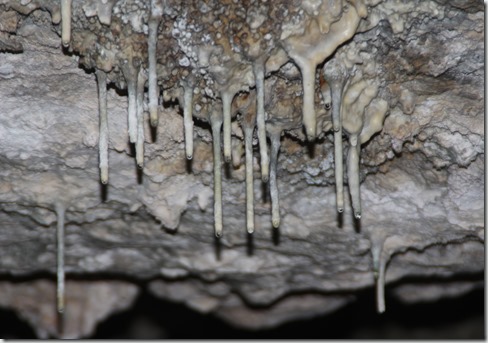 Water trickles down through the limestone continually, and you can see here the tiny new formations growing in the cave. 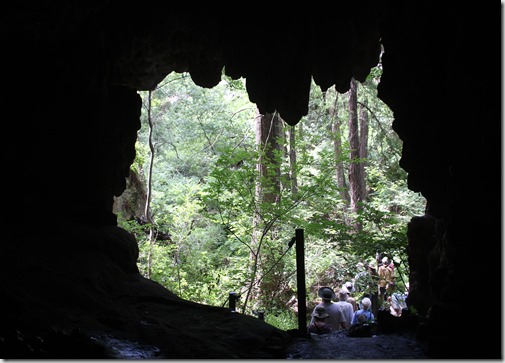 I liked the contrast of the view to the outside from the inside of the cave. 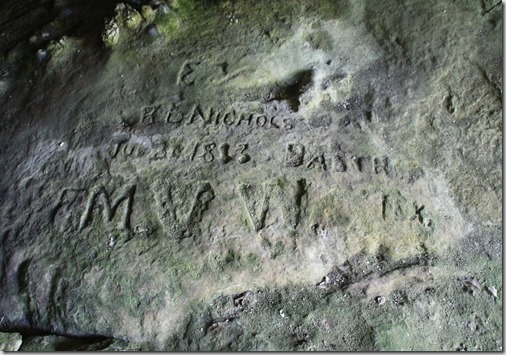 Land records show that the area was once owned by someone named Nichols, who must have also discovered the cave and carved his claim into the limestone in 1813 when he came across it. 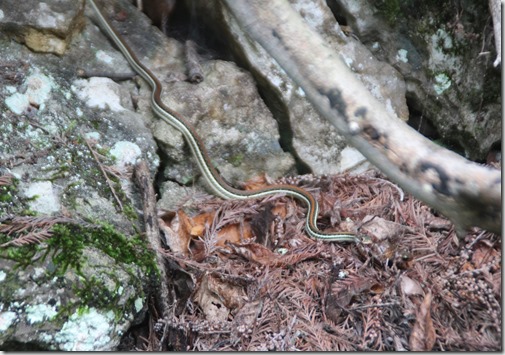 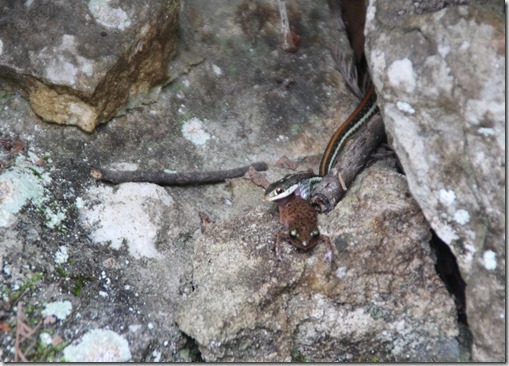 I wasn’t quick enough to get a shot of a water moccasin as he slipped into the water, but on the way out we were there when this little garter snake made a meal of this poor little frog. But then, all God’s creatures have to eat. 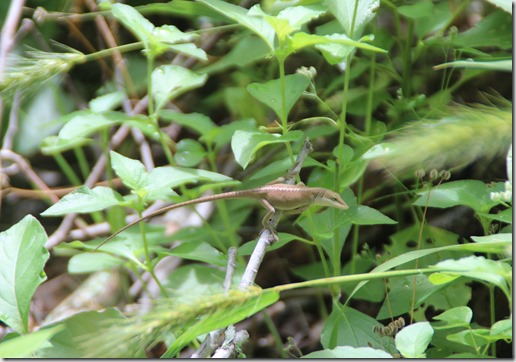 We also spotted this little brown lizard. I would have missed him; someone else on the tour was keen of eye and saw him. 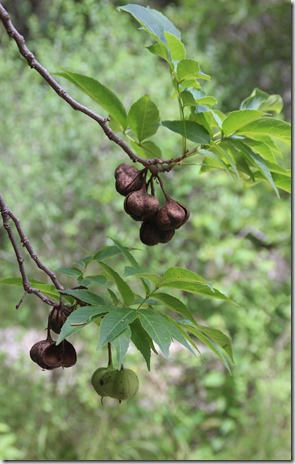 I believe I remember this to be a Mexican horse chestnut tree, but our guide, Paul, said it was not a true horse chestnut. Or was it hazelnut? You will have to go yourself and solve the mystery. 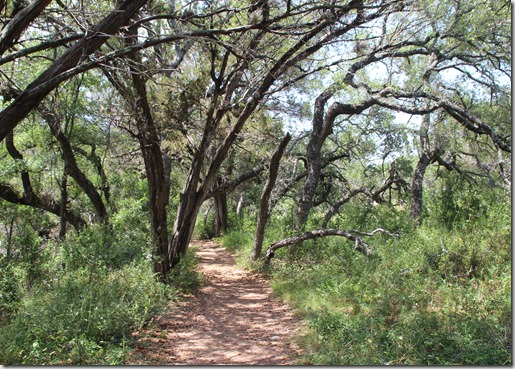 The trail leading to and from the canyon was hotter and dryer, but still inviting. 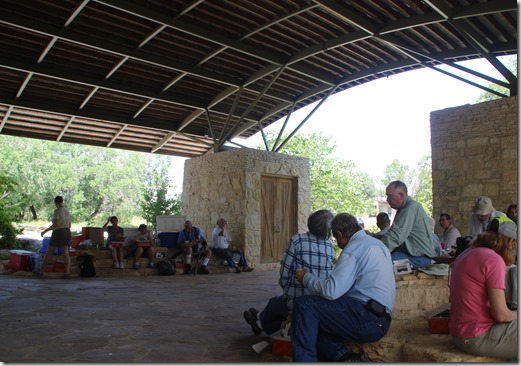 We enjoyed a nice box lunch after the hike and then headed back to the hotel. So if you find yourself in the Austin area  and want to explore a new place, check out the Westcave Preserve. Call 830-825-3442 and set up your visit. I was glad I chose it as my field trip. And if you want to know more about the cactus convention, go to Cactus Are Cool at www.cactusarecool.wordpress.com