Sisyphus and My Walk Path

When I work on my walk path, I am reminded of Sisyphus from Greek mythology, the king of Corinth who was punished for his deceitful ways by being sentenced to the eternal task of rolling a giant boulder up a hillside in Hell, only to watch helplessly as it tumbled back down to the bottom, where he would have to begin the whole process again. Upkeep on the walk path has become a Sisyphean task like that. Weeds have to be controlled, and as the wood chips decompose, they have to be replaced, after which the whole process starts over again. But then, the everyday walk on the path could be looked upon the same way, couldn’t it, walking being upkeep for the body. Both of which become an analogy for life, I guess. Much of the business of living has to be repeated on a daily basis. And we don’t complain about repeating another day of life, do we now? 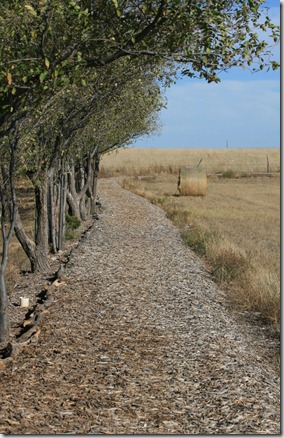 You are perhaps wondering, what walk path? That would be the little project I began years ago as a place for me to walk after I gave up running. For years I ran down the dirt road behind the house, two miles down and two miles back, doubling and tripling that distance when I trained for the two Houston marathons I ran in 1987 and 1995. And I sometimes ran around the pasture. Then sciatica problems developed, and I had to fall back on walking. Boring as all get-out, but less painful.

By this time the path in the pasture was a bit uneven thanks to soil and wind erosion, and it was not pleasant or safe to walk on the path, much less run. So it was obvious that unless I wanted to sprain or break an ankle I needed to do something to create a a level walking surface, and for some reason I hit upon the idea to use wood chips to make a flat path. Before this we had hauled loads of wood chips, which were free for the taking, dumped by the Asplundh tree-trimming company out on the Morton highway and used them for mulch in the flower and cactus beds; now I could use them to pave the path. Then one day we were able to catch the truck in town and asked them if they would empty their truck in our pasture. Since they needed a place and our pasture was handier than the place out of town, they were glad to do so. This was a much more efficient way to get the mulch, and the project now started in earnest. 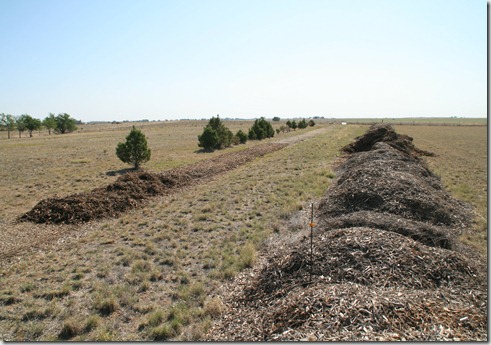 I am pretty sure  that this all started sometime in 1997 and continues to be a work in progress. Over the years three different crews have unloaded in the pasture three different times. I think we hauled the mulch ourselves around 1998. They brought the first batches in 2000, then  in 2005, and the last load came in 2011. And when I say batch, I am talking abut a truckload every other day or so for the duration of the contracted job in Muleshoe, which would take several weeks. Boatloads of the stuff.  I am halfway through using that third batch right now. 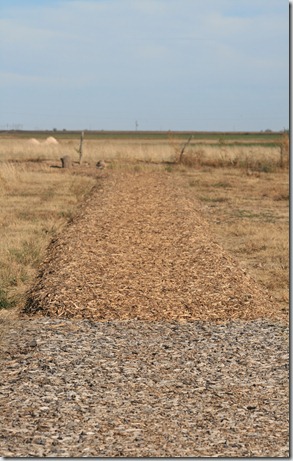 The process went something like this: I marked off the path to be 7 feet wide, laid out overlapping  wet newspaper sections as a base to inhibit grass and weeds, and then dumped wheelbarrow loads of mulch over the newspaper and spread and leveled it with a rake, dragging and leveling it with a chopping motion with the rake till it looked like I wanted it to. That process was pretty time-consuming and labor-intensive, but it took that to make a good base foundation for the path. Then as the wood chips decompose, which they inevitably do, I would go back and repave with more mulch, just resurfacing he original path. And that is where Sisyphus lurks in the shadows as the mascot of the project. 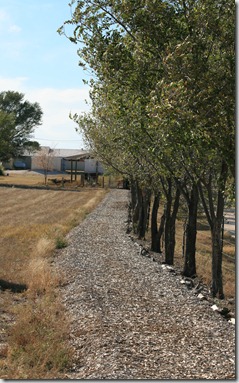 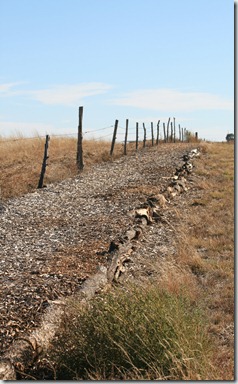 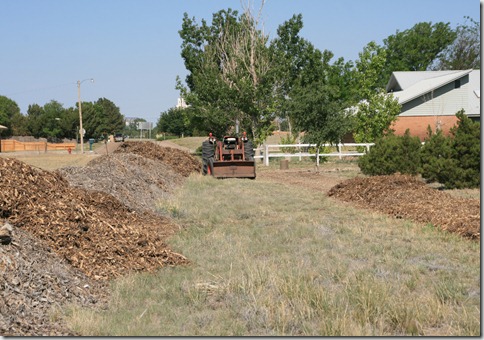 To keep the path usable, the Sisyphean upkeep must continue. But over the years I have improved the process. First I moved mulch one wheelbarrow load at a time. Then Bill bought me a little 3×4 foot utility trailer that I loaded and pulled with the riding lawn mower and later with the golf cart. Then he used the tractor to load a bigger single-axle flat trailer and pulled that to the path to be unloaded. Then we just scooped up the mulch in the tractor front-end loader and dumped it directly on the path for me to spread. But the fact remains that it is a never-ending process, which is not necessarily a bad thing. Repaving the path is good exercise like walking the path. And both activities get me outdoors, quiet time to myself, and time with the cats and dogs, as one or more of them is always there to keep me company. 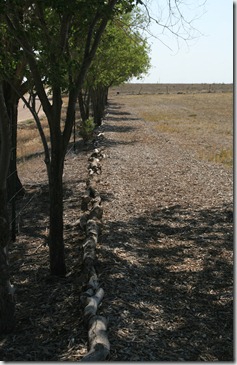 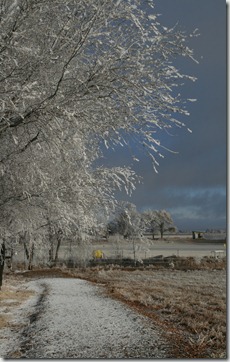 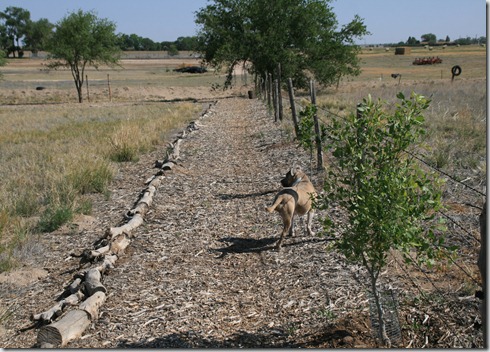 So when life gets to feeling as heavy as Sisyphus’ rock, I retreat to my paving or walking path, and things don’t seem so bad.