My next kitchen faux pas was also while we were at A&M. It was the turkey day game weekend and John Phillips, Bo Reagan, and a couple of other Aggies down the street were having their girl friends in for the big weekend. The plan was to all enjoy a barbecued turkey meal and then go to the game. As the hosts, the boys were supplying all the food: turkey unknowingly supplied by the ag department’s poultry farm, pinto beans, beer, and potato salad, if I would be willing to make it. Of course I said yes. John asked how many potatoes he should bring me for the salad. Having enjoyed but not having ever made potato salad yet, naturally I called and asked Mother for the recipe and how many potatoes I would need for ten people. She said to allow one medium potato per person, so I told John ten potatoes. John brings me what, to a kid who is 6 foot 2, looks like medium potatoes, which were actually these gargantuan things-they were giants, probably eight inches long!. I dutifully cooked all ten of them; it took every pot and a borrowed one to get the job done. Then the only thing I could find large enough to mix the salad in was the full-sized vegetable crisper drawer out of the refrigerator. Which is also what I served it in. I promise you, we had enough potato salad to feed the entire A&M football  team. But it was darn good potato salad, I must say. 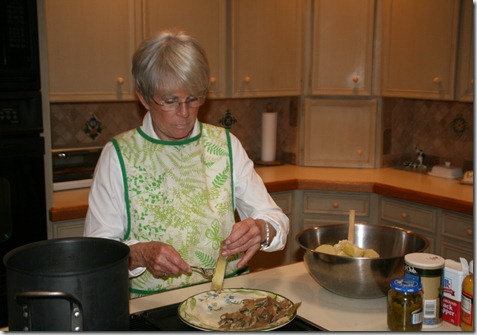 I recently made another batch of potato salad for another football meal, the Super Bowl. This time I was cooking for six people and used five very medium potatoes. It only took one pot to cook them. Mother always boiled them in their skins and then slid the skins off while the potatoes were still hot. This method also gives the potatoes a different texture in the salad, and I like that. This time we had enough to go around with just  the right amount left over to for a later meal. 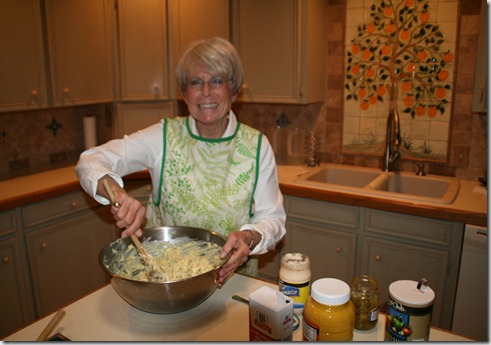 So I guess I have finally mastered the art of potato salad.