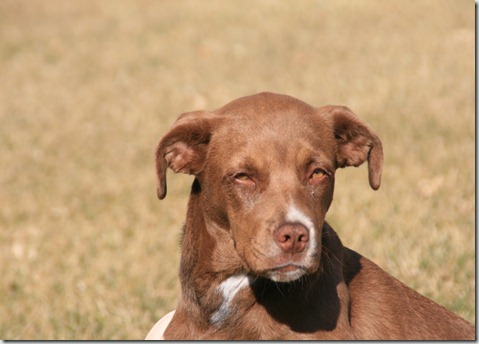 TThe blog is late this week because have been conducting triage on our newest family member.  Meet Porche, Colten’s latest contribution to dog rescue. Porche, which we choose to pronounce pour-sha, came to live with us after her accident Sunday afternoon. Colten and friend Chris had a thriving seasonal business putting up outdoor Christmas lights this year and were in the process of completing the second stage of the job, taking down the lights they had put up at the start of the season, this job being undecorating the office of Pat Angeley, CPA, when they witnessed a dog crossing American Boulevard and meeting with disaster when she was hit by a passing motorist. Nothing would do but that they go to the aid of the dog, which of course, they did. Like any child related to me would do otherwise. A city policeman came to check on the dog, as the motorist had flagged him down to report that he had hit the dog and asked that the officer check on the situation. By this time the owner, who had walked to the Stripes store causing the dog to follow him, showed up and informed everyone that he had lost his job and could not pay a vet bill. Animal control arrived and said she couldn’t do much for the dog other than take her to the pound and wait until Monday to put the dog out of its misery, assuming that was called for. Colten was not willing to let the dog suffer and eventually be put down if her injuries were fixable, at which point the owner was willing to let the boys take her to the vet and assume ownership, which they did. So a few x-rays later, Dr. Garth determined that, miraculously, there were no internal life-threatening injuries, but there was a broken leg, a dislocated shoulder, and said everything was treatable. He put a splint on the leg, gave her a good dose of pain medication, and sent her home with Colten for the night. The next day we take her back to the vet’s office, and they sedate her again, redo the x-rays, reset the leg and keep her overnight for observation. Tuesday she comes home, and the babysitting begins, which will last approximately eight weeks while the bone heals. So you know where we will be for the next two months. Right here. 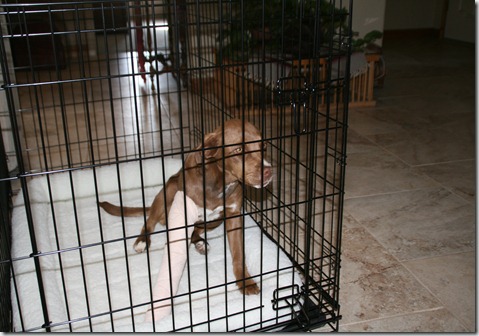 Bill’s first response was, well, we’ll just have to find her a good home. Really? No one wants to take on a dog with a broken leg, and by the time the leg is healed, she will have become a part of the family. Then the naming came up. Colten saw all this happen as he was stepping off the porch at Pat’s office, and we tend to name our animals based on something in their history. Sophie was the cat found inside the back of the sofa at school; Peaches was the cat who wouldn’t leave Bill along as he peeled fresh peaches for me to freeze; Minnie was the cat who made one too many cats; Poopie was the cat who did funny things and needed a funny name. Mari kept the name she had when she came to live with us, but we wanted a name for this pup that would blend with hers, so since Mari is Spanish, and porche is Spanish for porch, there you have it. And in our family,after that animal gets a name, well, it’s a done deal. Porche is here to stay. She will have to accept the cats in order be welcome here, however, but I think that will take care of itself. So far they are all  doing that cat thing where they ignore her as if she is not worthy of their attention, and she is not able right now to do much other than watch them from a distance anyway. Peaches, on the other hand, has hung around to observe and make sure she can trust this newcomer. 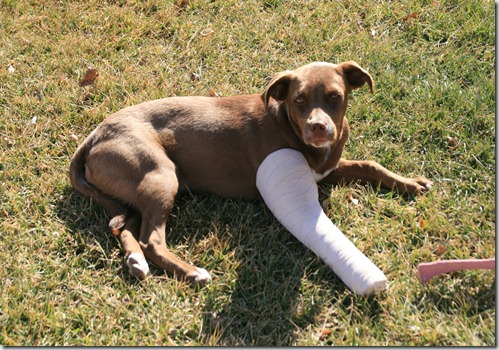 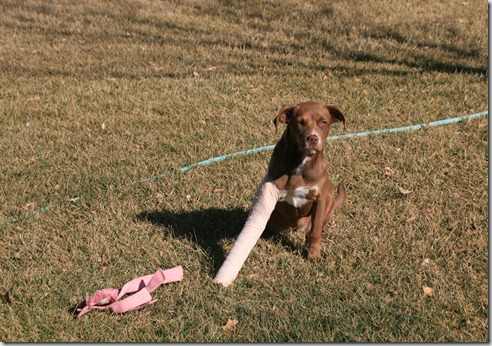 Porche is supposed to be about a year old, and a pit bull/chocolate Lab cross. In other words, a mutt. She has also not been house-broken, so it is like having a new-born baby around-a newborn baby with an awkward leg cast situation-and we are on a three-hour take her out and hope she potties schedule. She gets lots of praise and a treat when she performs. Mari goes out at the same time, and when she hears the “go pee-pee” command that she was also trained with, she dutifully pees, so I give her a treat and praise, too, so she won’t feel left out of jealous of the new girl. So far we have had two accidents and several successes, so maybe it won’t take too much longer for the training to sink in. 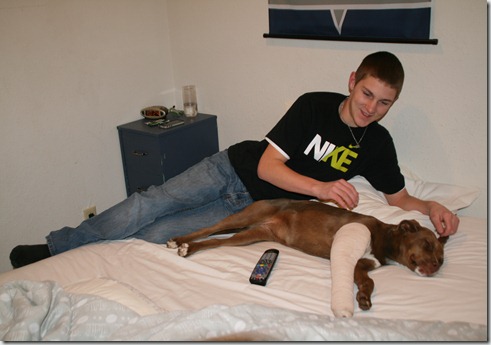 This little dog may not be house-broken, but she picked right up on the fact that the bed is much more comfortable than the floor, as she just made herself right at home on Colten’s bed. Funny how the splint didn’t keep her from jumping up there!  I have a feeling she will just fit right in. 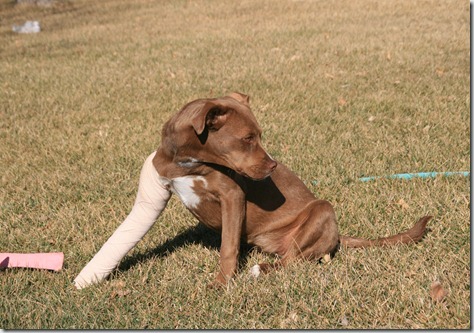 Now, of course, the rain we so desperately need comes tonight, along with nice high wind, complicating the trips outside. And the next three hours are just about up, so you’ll have to excuse me while I take her out for another shot at potty-training. Stay tuned and see how she turns out. 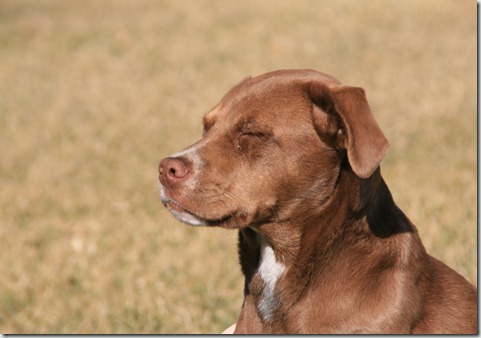