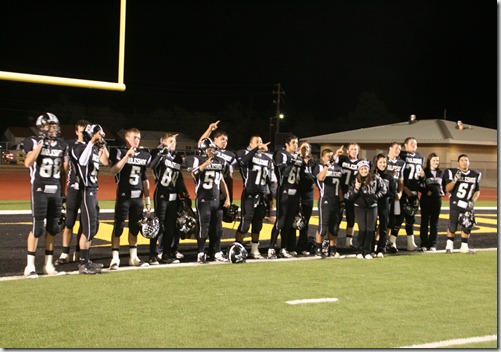 The Mighty Mules’ season may be over, but Mule Mania is alive and well and  the team and fans have much to reflect upon positively. The Mules met the Eastland Mavericks at Snyder’s Tiger Stadium Friday night. Again we were blessed with perfect football weather: bright half-moon, crisp and cold (by the end of the game a bit too cold perhaps), not much wind, and a good crowd on both sides. I think the Mules had the most. But then Eastland would say the same thing. At any rate, the game started off well, with our band doing a nice rendition of the national anthem, and Garrison Myers giving a heartfelt, thoughtful prayer, an actual prayer over the loud speaker. How long has it been since you have experienced that? Eastland won the toss choosing to kick off first. On the second play in this first series we commit our first false start, a mistake that plagues the Mules the entire game. The tension in this game is palpable and that is just one way it manifests itself all night. We have to punt on 4th and 12, but manage to get the ball back when the ball takes a bounce off someone’s helmet and we recover. A few short plays later quarterback Caleb Wood carries it in for the touchdown, and we are ahead 7-0 with 6:32 remaining. Unfortunately, two first downs later Eastland also scores, so now it is 7-7 with 4:43 on the clock. We fumble on the possession after the punt, but then our defense holds tough, and we get the ball back, and the quarter ends tied 7-7. The second quarter sees the Mules commit the second false start, followed by an interception followed by a ridiculously easy score by the Mavericks, and the score is 7-14 with 10:55 on the clock. The Mules have the ball, but the third false start  and few plays later we give it up and 4th and 13, and by the time the clock says 4:14, Eastland has scored again. Chris Cage makes a tackle to stop their two-point conversion, and the score is 7-20. The Mules rally, however, and manage to score with 32.7 seconds before halftime, and the score is 14-20. But with 4.6 seconds left, Eastland also rallies and scores, miss the extra point, and the quarter ends with the score 14-26 The third quarter starts with the Mules kicking off, each team receiving a penalty apiece when we recover a fumble. The fourth false start occurs, but we are able to march down the field for a touchdown and point after, making the score 21-27. Eastland keeps the ball for one series and punt, but then we have to return the favor and punt right back to them. Our defense holds them, causing another punt to us, and we go on to score. We go for two after yet another false start, but the attempt fails, and this quarter ends 27-26. And at this point, the fans are all taking a deep breath, as I am sure the players did, feeling like momentum was now on our side. The momentum doesn’t last long, however, as Eastland goes on to score again with 8:59 showing, making the score 27-32. On our next possession we commit false start number 6, throw another interception and see the Mavericks score again with 5:18 left. The score is now 27-41, and time is a factor. And then on our first play after the kick-off, Wood connects with Austin Ross who makes a whopping 75-yard run for a touchdown, Ignacio Elizalde makes the extra point, and the score is 34-41; 5:07 left. Time is even more a factor. And Eastland runs off just as much of it as they can before scoring again with 2:11 left, Now it is 34-48 Eastland, and the handwriting is pretty much on the scoreboard. We make a quick first down on a pass to Ross, but the next pass is intercepted, and that is pretty much it. Eastland makes another first down before running out the clock, and the season ends for the Mules, 34-48. Eastland will go on to play Bangs in the next round of the playoffs. Our seniors were especially unhappy with the loss, naturally, but the fans were still proud of them and let them know it after the game with lots of congratulations for a good season as we all went down on the field to hug their necks. They have done well, conducted themselves as gentlemen and sportsmen all season and gave us all exciting Friday nights to remember. As we used to say when I was in school, Way to be, Mules! Thanks for the memories.