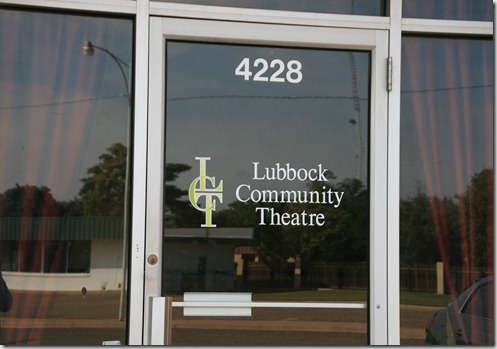 If you read last week’s blog, you know I attended a writing workshop presided over by Jaston Williams and that I promised more information about the Lubbock Community Theatre, where the workshop was held. So, here we go- 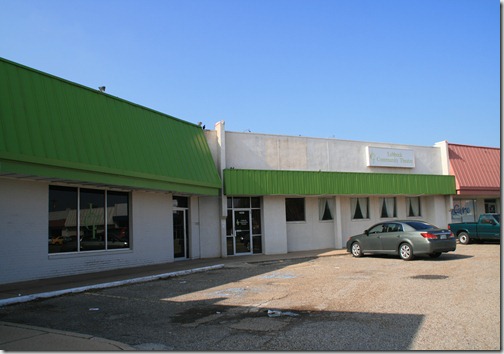 The organization known as the Lubbock Community Theatre has been around since 1950, although local community theatre productions date back to the ‘40s. LCT as we know it today was incorporated in 1989 and is a non-profit organization that depends on ticket sales, grants, endowments, and underwriters to keep things going.  The mission of LCT is to do just what their name implies: promote and produce community theatre, and, as I was told, keep community in community theatre. They have been housed in several places around town, but their current home is at the corner of Boston and 43rd Street, in what I was told was the first strip mall in Lubbock. They started out in a small portion of the repurposed (the new politically correct term for recycled, I have noticed) building, gradually expanding into adjoining floor space, and now have quite an expansive set-up, with all the necessary areas for a theatre company, including a “Green Room” where the actors wait for their stage entrances. 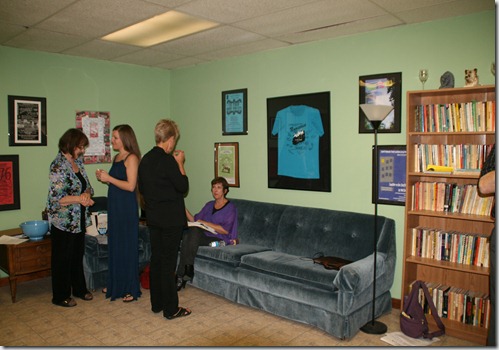 The workshop participants relax in the Green Room before our performance. 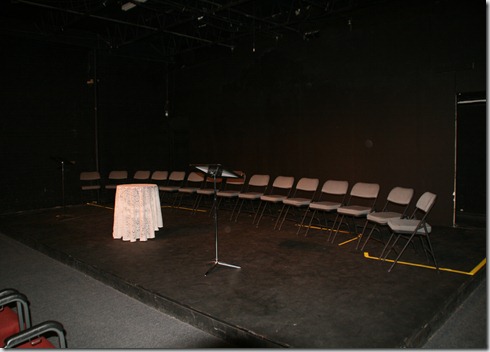 We needed no props for our presentation other than the table provided for those who might rather sit down while giving their piece. We did get the full treatment of stage lights upon us, so now we can say we performed under the bright lights! 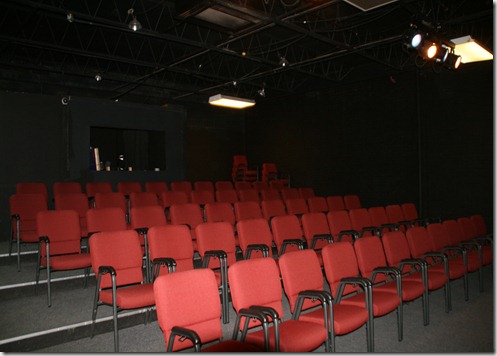 The theatre as it now stands was built by the hands of many volunteers. The sound and lighting booth was already in place; the stage and risers were installed when LCT moved to the building. The seating capacity of the theatre itself is 65. 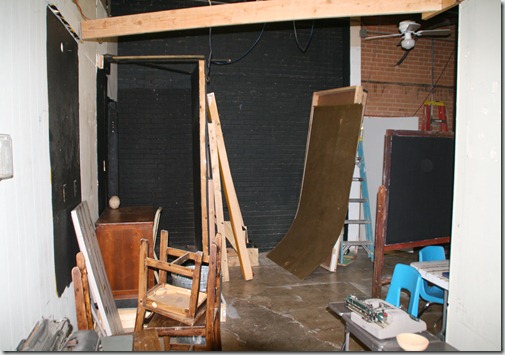 Backstage, seen here, was cluttered with the props needed for the play the group is now working on, All In The Timing, so that we could have the stage for our workshop presentation.  I suspect all backstages would look cluttered to those of us not familiar with theatre; it’s the nature of the beast. I found all the rooms behind the stage to be interesting and fun because it was all so new to me. 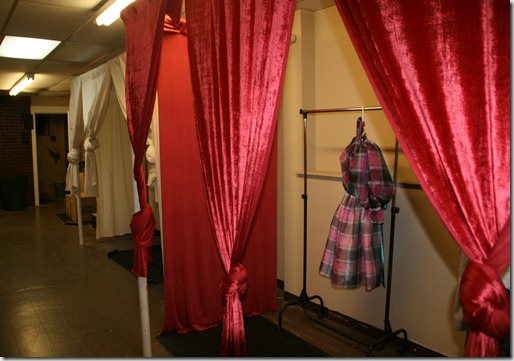 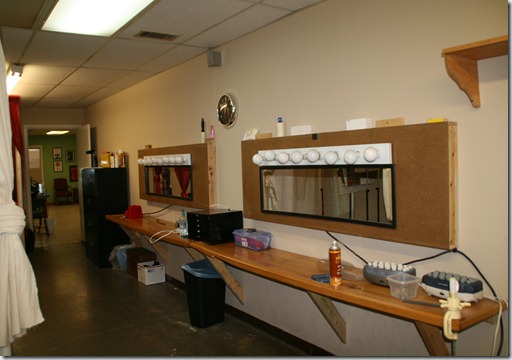 I’m sure this makeup and dressing area is much more exciting the night of a production. 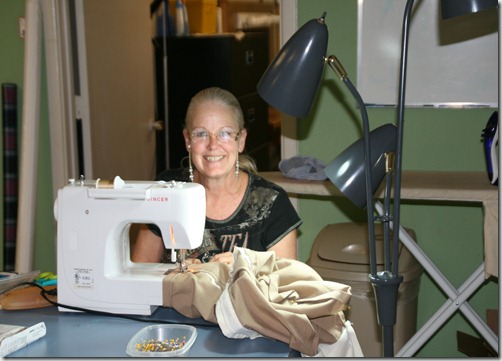 Patti Campbell works in a far corner of the Green Room. Her work is never-ending and constant as each play needs its own unique wardrobe, which she turns out quickly and beautifully. 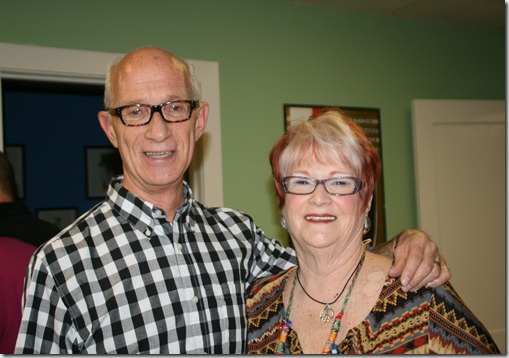 Jay Brown and his wife Pam have been involved in LCT productions for many years in a variety of jobs. Lubbock Community Theatre is a labor of love for all those involved, from the board of directors to Patti Campbell, the wardrobe/costume wizard, John Packard, the office assistant, as well as Jay Brown  the managing/artistic director who happens to hold the only paid position, a move that became necessary to ensure the success of the organization. That having been said, John’s job is a part- time paid position, Patti sometimes gets paid for more challenging wardrobe assignments, actors and directors get some reimbursement, so when the occasion calls for it, money does change hands. But after talking to those committed to the cause, I can assure you passion for theatre and not money is the reason they do it. The board or directors serve two-year staggered terms, and many have been on the board for what seems like forever because they enjoy what they do. New people are added, too, when circumstances create a need. De Lyn Wolcott is this year’s board president who guides board members Andy Rasa, Lonny Howell Fox, Kevin Ten Eyck, Gloria Mason, Donna Hopkins, Kimberly Ansolabehere, Jana Barnhill, Robert Barnhill, Pam Brown, James Bush, Julie Harris, C. Kevin Helmer, Chris Kabes, Todd Klein, Ida Esquivel Rasa, Ashley Rhodes, and Ruth Schiermeyer. LCT  stages five productions a year, along with what is called the second season, which consists of a children’s play and a Christmas play. A play selection committee is appointed to come up with a list of five plays they think will be interesting, challenging, and that reflect community standards, but have been known to sometimes push the envelope a bit, with plays such as The Laramie Project.  And occasionally a classic will make an appearance, like The Crucible. The agreed-upon list then goes out and interested directors and actors magically appear. Productions usually run for three week-ends straight, so a theatre-goer has many chances to catch one of the plays. So if you are in need of a night out and tired of the same old movies, try a local version of Broadway. Check out the website www.lubbockcommunitytheatre.org for a schedule of upcoming productions, ticket information, as well as a look at some previous plays, more information about the organization, and information about their youth theatre program. Jay Brown can also be reached most mornings at 806-749-2416 to answer your questions. Then break out the dress clothes and treat yourself to a LCT production. I think you’ll be pleasantly surprised and definitely entertained. Thanks to Jay Brown, Pam Brown, Jim Bush, Patti Campbell, and all those who helped provide information for this article.