I traveled back home to Rosenberg a few weeks ago to pay my respects to Loma Koenig, mother of my friend Carol Sue and friend of my family. I had also been back to Rosenberg for the class reunion in August, so between the two trips I had a double dose of one of those trips down memory lane. I’m not sure whether the distance or the time had the strongest effect on me. 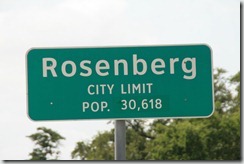 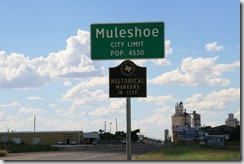 Obviously both played their part in making me feel  disoriented and lost in a strange place that I kept trying to make familiar. I guess there is something to that you can’t go home again thing. I could go home, but what I found was not the home I remembered. Well, actually, I did find my first home in Rosenberg, right there on 4th Street, where we lived until I was eight or nine, I guess, when we moved to the house Mother and Daddy built on Timberlane Drive. 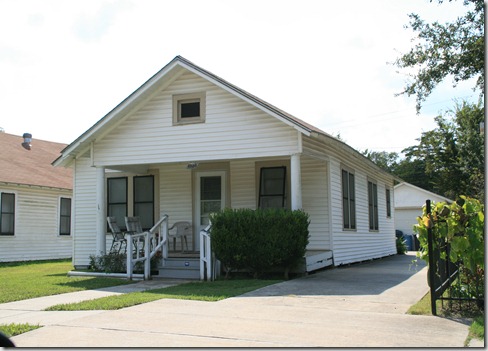 I didn’t drive by that house again, though. I remember how hard it had been to drive away the day I officially moved Mother out of it and to Graham after Daddy died. Figured I didn’t need to relive that. But every time I go back, I can’t seem to help comparing where I live now to where I lived then. Not necessarily better or worse; just different. And interestingly enough, the history of the two places, besides me being a resident of both, starts with the railroad.

Where Rosenberg now stands started out in the 1830s as an unnamed shipping point on the Brazos River, which, by the way, has tons of water in it year round, unlike the skimpy, if not dry, Brazos River you might cross up here. The Gulf, Colorado, and Santa Fe Railroad eventually came through what was called the Rosenberg Junction in 1880, having been named after Henry von Rosenberg, the first president of the railroad. By 1883 it had officially been named Rosenberg.

Muleshoe was founded in 1913 when the Pecos and Northern Texas Railway came through the area and a nearby small town named Old Hurley literally picked itself up and moved to the railroad to become what is now the town of Muleshoe in 1913. Muleshoe stands on land that had been a part of the Muleshoe Ranch, which had been a part of the famous XIT Ranch, and stories abound as to where the name came from. One story has it that the name was taken from the Muleshoe Ranch; another says it was because of the number of mules in the area; yet another says a mule shoe was found somewhere on the ranch and the name stuck; take your pick. No matter how it came about, it gives the town the distinction of having one of the more unique Texas town names. So Rosenberg is older than Muleshoe.

That plus the fact that their climates are worlds apart-think sand storms versus hurricanes- factor in the appearance and personality of the two places. Rosenberg was a small town when I lived there, a little bigger than Muleshoe, but it has grown to 31,676 residents, according to the 2010 census, so it is also considerably larger than Muleshoe, whose population now stands at 5,158, also according to the 2010 census. Located on the Gulf Coast, the town is covered with live oak trees which, thanks to the rain and warmer temperatures, grow to enormous size. Johnson grass is the weed everyone fights. Muleshoe has elm trees which do get big, if they live long enough, and of course, tumbleweeds run rampant all over the place in Muleshoe. 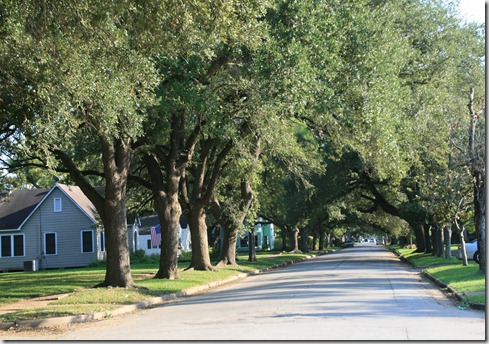 Carlisle Street is one of the older streets in Rosenberg, and I have always thought one of the prettiest because the trees meet in the middle, forming what looks like a long green tunnel, which is not uncommon on other streets in town.  I hunted all over Muleshoe for a street like that, and what you see below is the best I could find. Give those trees some water and lots of time, and they may one day meet in the middle, too. 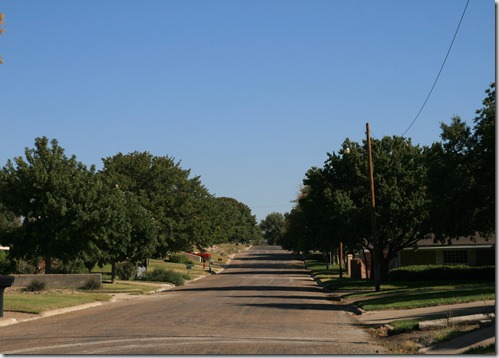 Age and climate mark the houses and landscaping as well. I like shiny big new houses, too, but it’s the more modest, smaller, older homes that sometimes have the most character and can certainly be as appealing as high-end homes. That’s what I noticed as I drove around the streets of both towns. Rosenberg had the advantage in this category since many of the homes were older and had older, bigger trees which, let’s face it, really dress up a yard. But the modest homes in Muleshoe had their appeal, too. 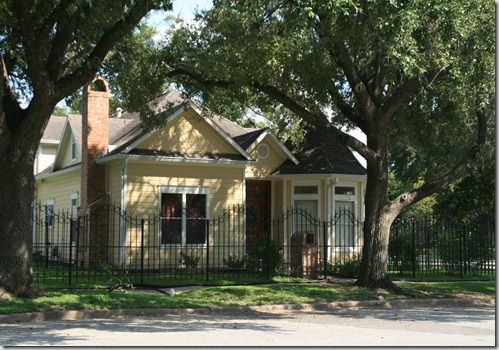 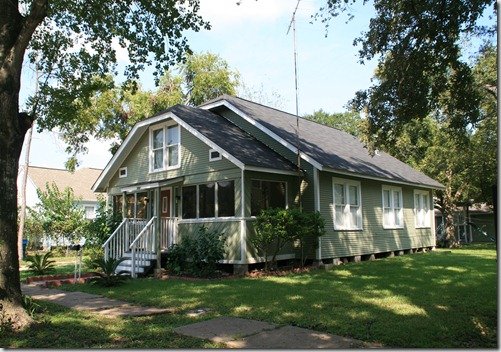 The two homes above are in Rosenberg. the two below are in Muleshoe. 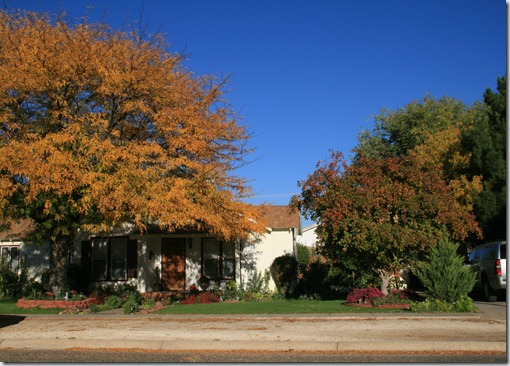 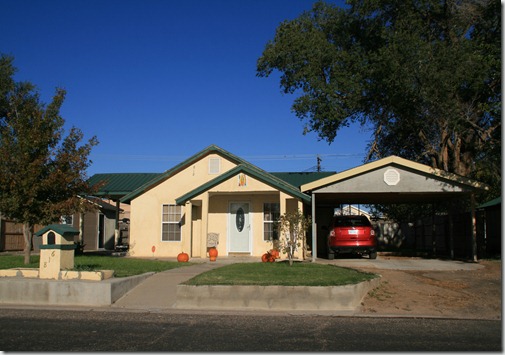 The trees were a major difference in the landscaping of the two towns. The Gulf Coast has all the rain, humidity, and heat necessary to keep everything lush and green. West Texas is green if it rains, which is not all the time. Oak and pecan are prevalent in Rosenberg; elm and honey locusts grow well in Muleshoe, as well as some oak trees. Muleshoe does have the occasional really big tree, but big trees blanket Rosenberg, like in the picture below. 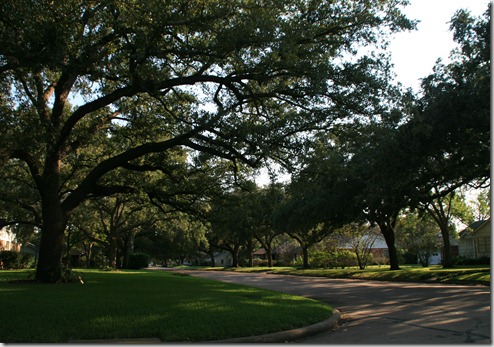 I love big beautiful trees, but it is the shade they grace us with that is their real gift. Shade in Rosenberg is everywhere; If you look hard enough, you can find that kind of shade in Muleshoe, as seen below, just not quite as much of it. 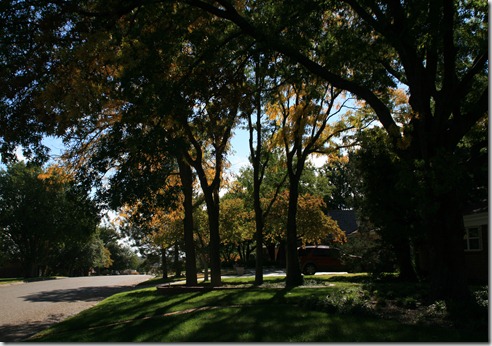 With the warmer winters and wet weather, tropicals like these elephant ears thrive in Rosenberg. Raised beds around oak trees are successful. too. 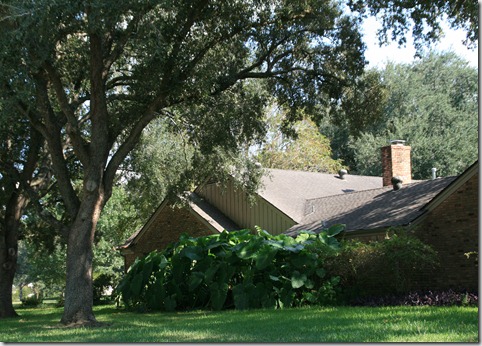 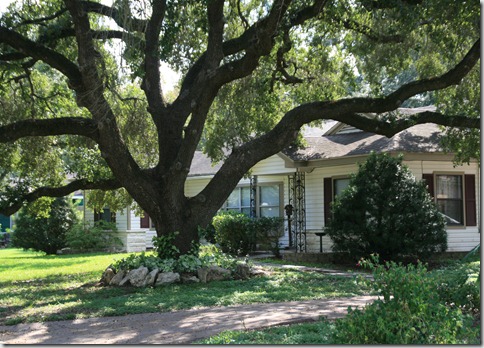 Yards in Muleshoe rely on wind and drught-resistant plants like evergreen conifers, agaves, and yes, cactus! 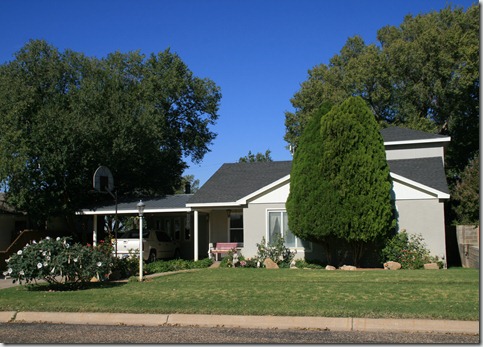 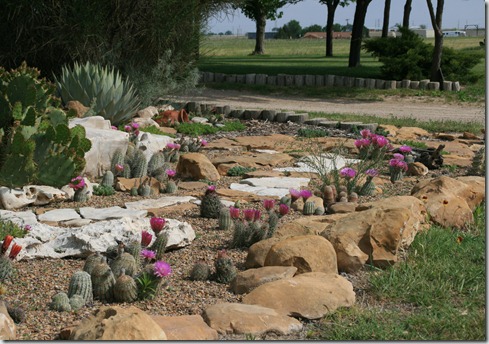 Even the Rosenberg post office looks older and has a different character when compared to the one in Muleshoe. 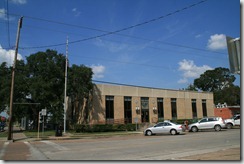 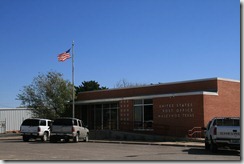 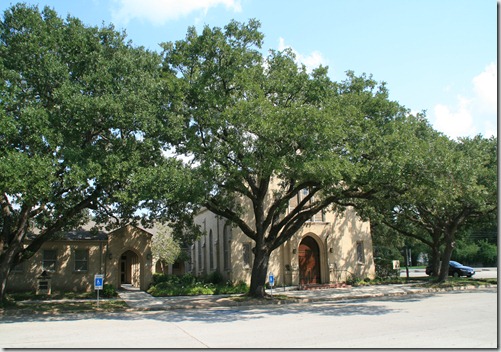 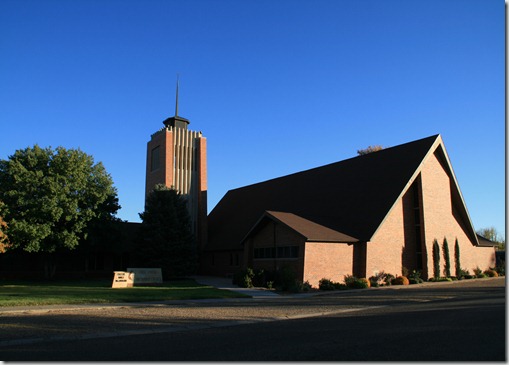 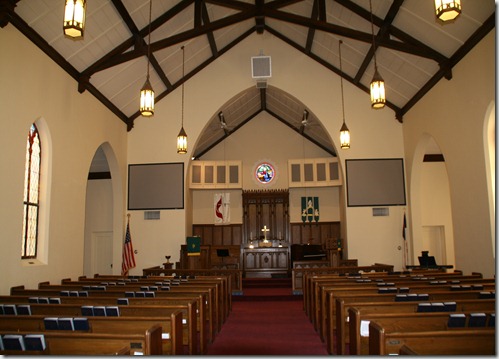 Look at the similarities in the sanctuaries of the two churches, Rosenberg above and Muleshoe below. 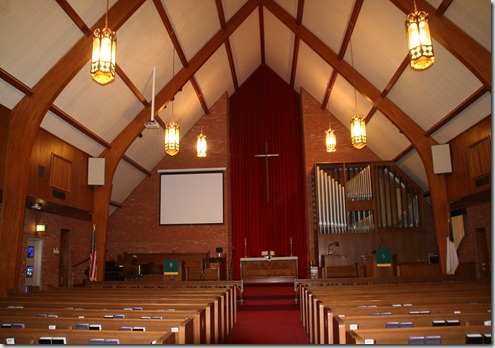 I grew up looking at this stained glass window. It was nice to see it was still there. 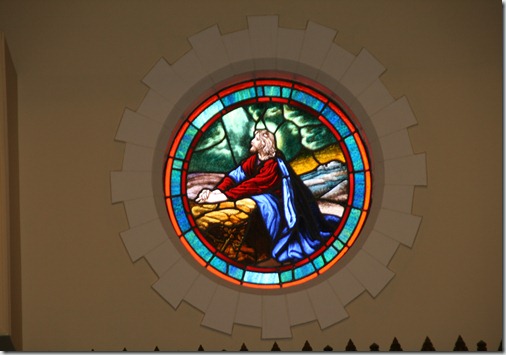 Downtowns of both cities have changed over the years, obviously, but one look at the buildings, Muleshoe above and Rosenberg below, and you can tell which downtown has been there the longest. All over Rosenberg I could see the influence of Houston and growth in the shopping malls, hotels, new housing developments, schools, everything. I could still find my way around, but it certainly wasn’t the little town I grew up in any more. 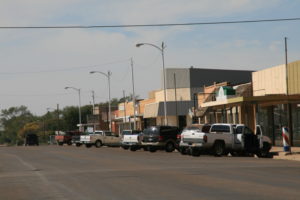 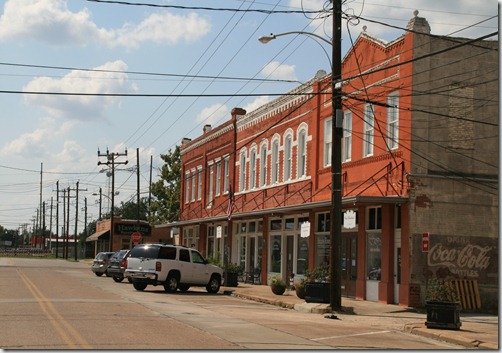 A favorite place to eat chicken fried steak and such used to be the Texas Grill at the end of highway 59 as it went through town. Time has changed that, but I was glad to see the girl still waving from atop her horse. At night she would be outlined with neon lights. In Muleshoe the place to eat Mexican food has been Leal’s, which has probably been in Muleshoe about as long as that cowgirl has been waving to passersby. 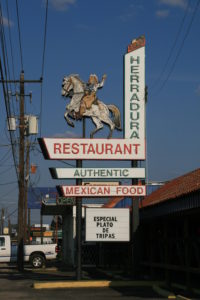 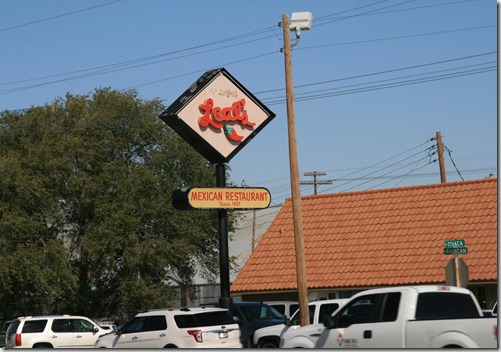 I was there for the funeral on September 24th. They had already picked their cotton and modules were neatly stacked along the highway. I came home to cotton still in the fields, defoliated and ready to be stripped, but still in the fields, nonetheless. Both towns grow cotton, corn, and milo. Rosenberg also has rice; Muleshoe has vegetables and wheat. 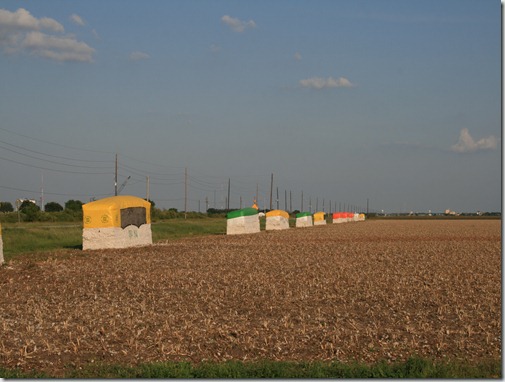 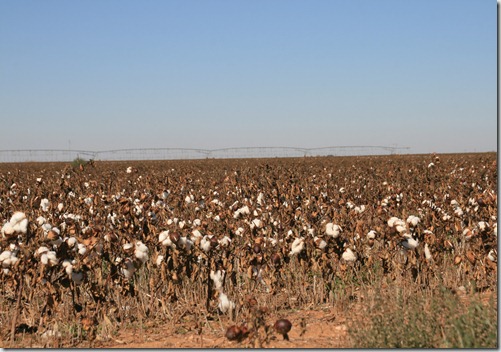 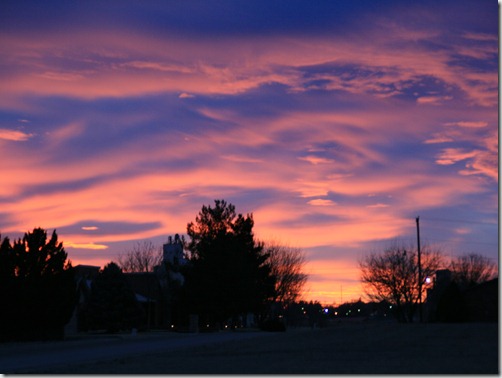 I am always a sucker for sunrise and sunset pictures, so naturally I have to make one last comparison.  Above is a sunset from my front yard in Muleshoe; below is the sunset as I was leaving Rosenberg on highway 36 to come home. 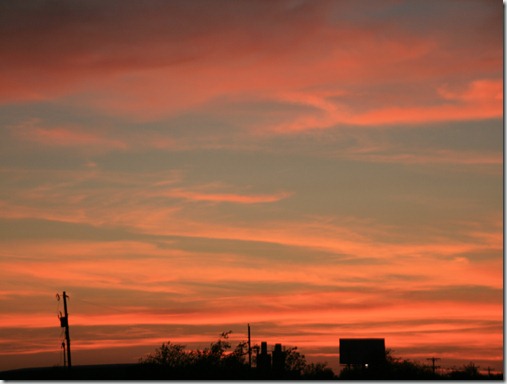 But Muleshoe is home, too. A  family grew up and memories were made there,  and a part of me will stay here as well. No matter the miles, no matter the years, I will always have two homes.