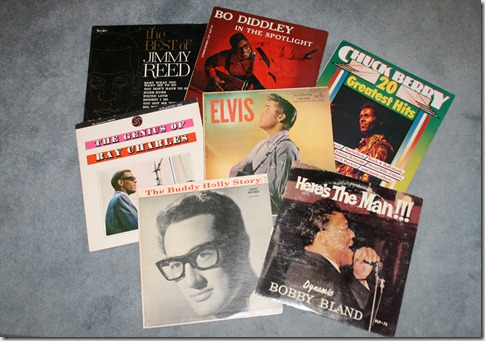 We have Sirius/XM radio in our vehicles and way more stations than we will ever care to listen to. But it is so nice not having to endure stupid, irritating advertising and having the option of tuning into just the kind of music we want to hear. Which means the stations that I wear out are right in a row- 50s, 60s, 70s and 80s, along with Elvis, B.B. King’s Bluesville, and Willie’s Roadhouse. See, there’s that generation gap again-Willie’s Roadhouse plays old country music, not this current stuff that is too many times pop masquerading as country. I will have to say, though, that when Willie’s station plays some of the really old stuff, I switch stations. Patsy Cline and Hank Williams, Bob Wills and early Ray Price are about as far back as I care to go. And I will also have to admit that some of the 50s stuff  sounds corny now. Pat Boone, some of those stupid girl group songs, and Lesley Gore?  Yuk!  Chuck Berry, early Elvis, Bo Diddley, Buddy Holly-now we’re talking classic rock and roll.

I found a music soul mate in Don Drachenberg  when I was gathering information on the Triumphs (“Let Me Tell You About The Triumphs,” August 21). He and I are stuck in about the same music time warp, and we had a lively conversation about music trends and what we thought was good music.We are both fans of old rock and roll, songs that had a good beat, an actual melody, were sing-able, and weren’t all gloom and doom lyrics. Live concerts performed by bands like the Triumphs used to be about the music, not production extravaganzas. I told him about our trip to Lubbock to see George Strait, Reba McEntire, and Lee Ann Womack (“George, Reba, and Lee Ann Sing for Us,” March 29, 2011).

Let me recap for those of you who probably didn’t read that post. Lee Ann I was not familiar with, but the crowd was, as she had been a music student at South Plains College in Levelland, near Lubbock, and she did a nice warm-up set, nothing out of the ordinary. Reba, apparently always the showman, even dating back to her early days when I saw her open for the recently discussed BJ Thomas in Clovis, New Mexico, in 1984, was resplendent in a sequined gown and billowing clouds of dry ice. In the Lubbock show she was still the showman,  with costume changes, lights, and a slide show. When it was George’s turn, he came out with trademark cowboy hat and guitar, and just stood there and sang. And the crowd ate it up.

My point to all this is that in most of today’s concerts, a show is perhaps more important than the music and can mask less than spectacular music. And I guess that is fine if a show is what you are after, as most people today seem to be.  But we of the older generation are perfectly happy with groups like the Triumphs who basically stand there and sing good songs. I have seen Elton John four times, the first time being with Billy Joel on the Face to Face Tour in Las Vegas in 1995, which was mostly the two of them and their pianos. I can remember at each of the following three concerts the whistles and bells were in full force which is probably to be expected since  Elton John is known for that sort of thing.  But he also plays music that has a melody and interesting lyrics. I would have gone to just see him, the band, and his piano.

I don’t know what category to put the music in that seems to be the dead-air filler of choice at various restaurants and businesses these days. For me it is mostly whiny voices wandering aimlessly trying to follow some tune with no real point and sappy lyrics. These are singers, and I use the term loosely, whose mothers must have told them how wonderful they were and encouraged them to make a record. So they did. And obviously someone bought them, so what do I know? Don was not a fan of disco at all, and I tend to agree, but I will have to admit that one of my favorite albums of the 70s is the Saturday Night Fever soundtrack. And we both lean toward rock and roll that came from blues roots, like Bobby Blue Bland, Bo Diddley, Ray Charles, even early Elvis.

And rap? Well, by now you can tell we don’t even consider that music. To me it is basically a monotone beat with a lead singer-and again I use the term loosely-who is only adept at grabbing his crotch and making in-your-face hand gestures. In the beginning some rap was tolerable because it was usually mixed with actual song, but it sounds like a distant cousin to today’s noise. One song comes to mind that does bring a smile to my face when I hear it, and that is Tone Loc’s 1988 hit, Wild Thing. I was teaching a leadership class at the time, and the kids were doing seat work that was appropriate for working with background music, so I turned on the radio, turned down the volume, and we were all happily busy when that song came on. It happened to be the first time I had heard it, or had bothered to pay attention to it, I suppose, and I became aware of the kids squirming around in their desks and watching me. By the time he got to the part about “I get paid 50 dollars for doin’ the wild thing…,” I couldn’t help but smile and look up to be greeted by a sea of grinning faces eagerly awaiting my full reaction. They laughed, I rolled my eyes, and work eventually resumed. 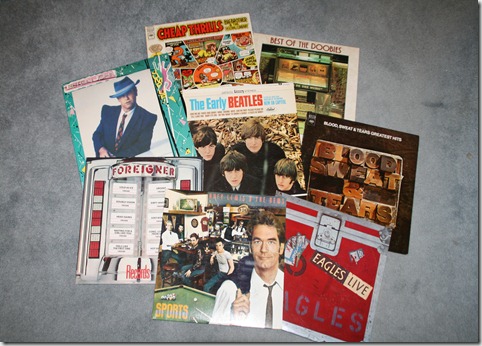 Which brings me back to why people make the musical choices they do. I hear certain songs and they bring back memories that make me smile or laugh or reflect or even cry. That’s why I choose to stay stuck in the music of those years. That and the fact I have yet to hear much that tempts me to listen elsewhere. That’s why my parents’ generation liked their brand of music and wondered why on earth I was listening to Elvis. And so AJ will make his music choices and I will never understand why, either. And his children will make choices he won’t understand. Ha!

Now, all of that being said, I am about to load a new CD I just bought by Bruno Mars which gives me a new artist a try. But, really, when I heard him play on the Grammys he sounded sort of like old time rock and roll, so I am not really straying that far from my roots, I suspect. I guess we are who we are, and some things never change.