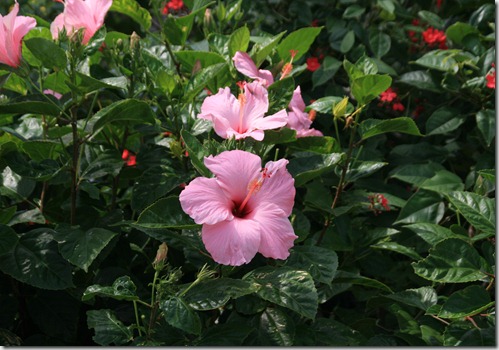 Last summer we traveled to South Padre Island; this year it was Galveston Island’s turn. Those of you who have had the pleasure to play on both beaches will probably agree with me that Padre is the prettier beach, hands down. But the island has history on its side, and we decided to introduce Maya and Ben and their mother to some Texas history and let them experience another Texas beach. So off we went, in two vehicles, no less, since we wound up with a few too many of us to comfortably fit into the Yukon. Plus, since we had two teenagers-Colten and his girl friend Stormi-and two younger ones-Maya and Ben-and four adults with varying interests-we figured having two cars which would allow us to check out different destinations might not be a bad thing, After breaking up the trip with a night at the lake, the four of us  picked up AJ, Erin, and the kids at Kyle and were on our way. The plan was to brave the traffic and take 610 Loop right down into the historic belly of the Houston beast, which we missed since TXDOT decided to block the downtown exit for road work, showing absolutely no consideration for our vacation plans, and we had no choice but to zoom along with the metro version of NASCAR to I-45 until we were able to take the correct exit to the San Jacinto Monument and the Battleship Texas for our first history lesson. 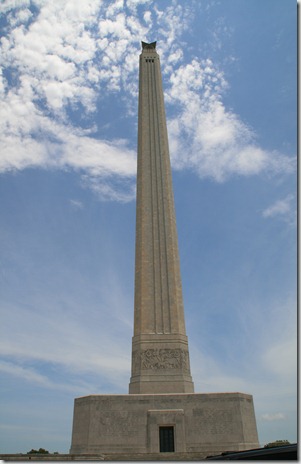 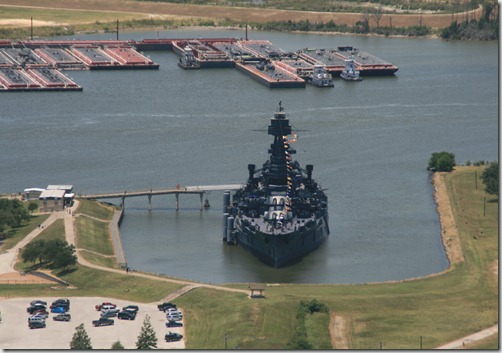 The U.S.S. Texas sits in its berth with the Ship Channel behind it. San Jacinto Monument, which, at 570 feet,  is taller than the Washington Monument, opened in 1939. It is a war memorial honoring those who fought in the decisive battle in the Texas revolution when General Santa Anna and his army were defeated. Located on the Houston Ship Channel, it and the battleship  U.S.S. Texas, are on the way to Galveston, so the state park housing them both was a logical stop along the way. We went up to the top for the view, checked out the museum at the base of the monument, but just drove by the battleship, to my dismay, as everyone was getting hungry by that time. The battleship is worth the time, however, if you are ever in the neighborhood. It turned 100 years old this year, the oldest surviving ship to have seen action in both world wars, and one of the few surviving ships build in the dreadnought style, which means it is equipped with the largest and deadliest guns of its era. 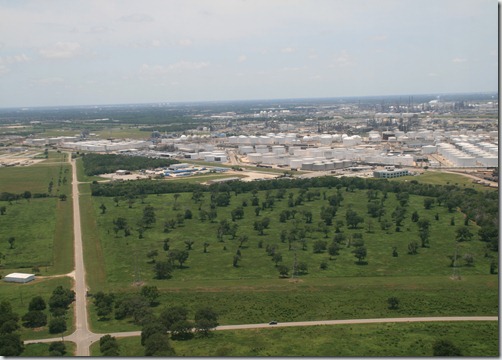 This is one view from the top of the monument, showing the refineries and industry at the edge of the battleground. 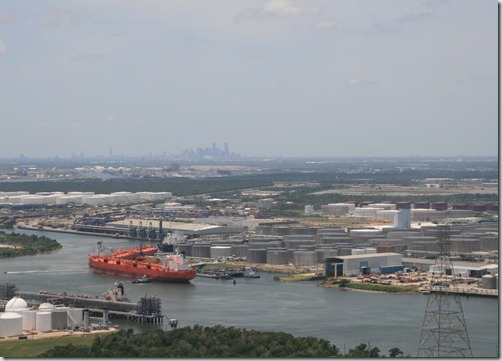 In this view from the top of the monument, you can see the Ship Channel and more refineries, and in the distance is the skyline of downtown Houston. 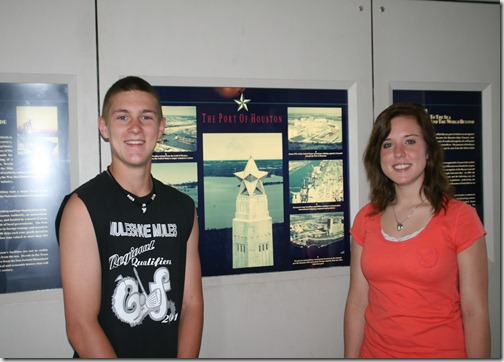 Colten and Stormi posed next to this poster at the top of the monument giving the history of the Port of Houston. You can also see on the poster a picture of the star on top of the monument. After eating piles of shrimp at the Monument Inn, which was the San Jacinto Inn before it burned down years ago, we headed for the beach. The drive was interesting in that it takes you past all the oil refineries, some of which had taken it upon themselves to paint scenes from Texas history on the oil storage tanks along the way. 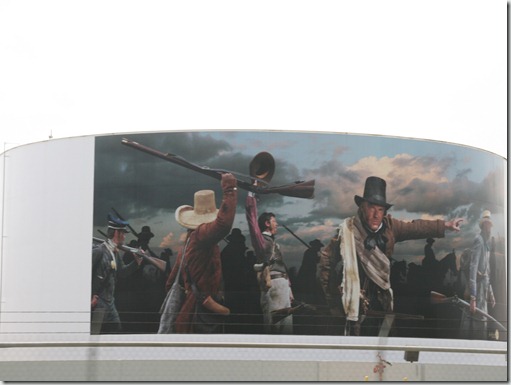 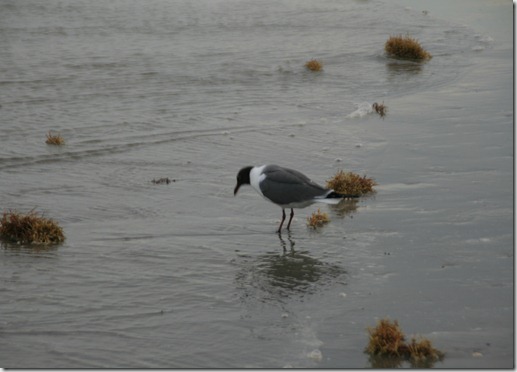 Upon arrival we cruised the Sea Wall, checked into the hotel, and hit the beach, which, unfortunately for us, was thickly littered with seaweed. I was told there had been a couple of high wind days which always churns up more seaweed, but being close to the mouth of the Ship Channel tends to create conditions that make the water darker and the beach a bit dirtier than beaches away from the activity. That didn’t seem to keep swimmers away, and our crew jumped right in anyway. 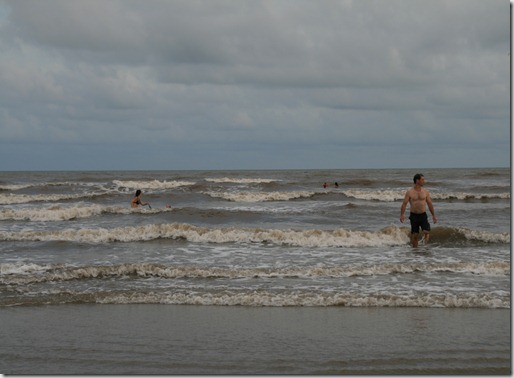 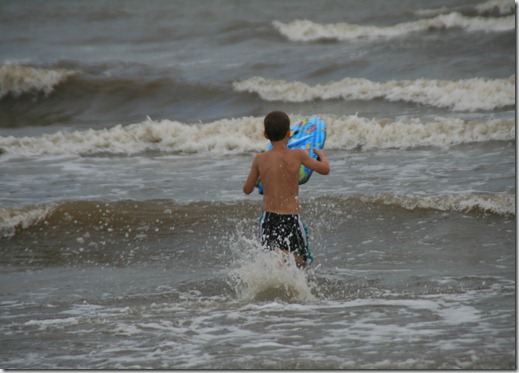 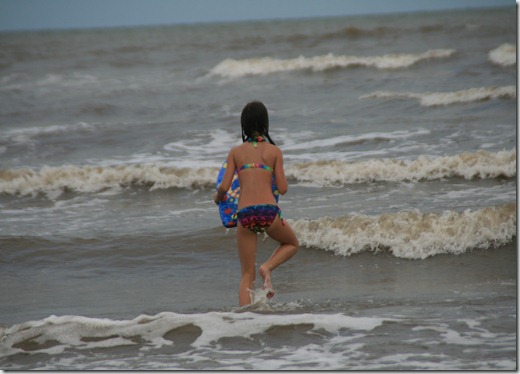 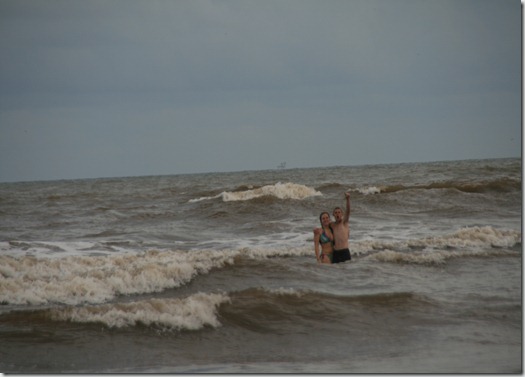 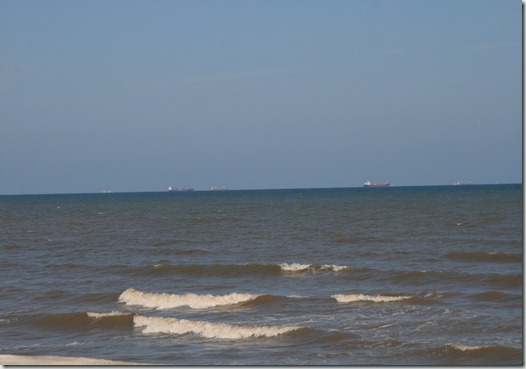 Note the ships in the distance waiting their turn to enter the Ship Channel. While we did not make all the historical sites the city has to offer, and they are numerous, we did check out the Strand, the downtown area that was the hub of activity in the heyday of the city, the beautiful old Victorian homes, Moody Gardens, and the old cemetery that sits quietly in the middle of the city. 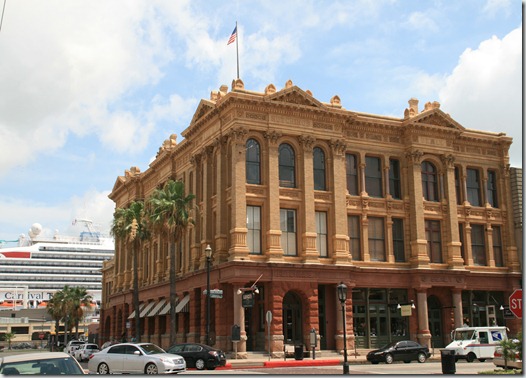 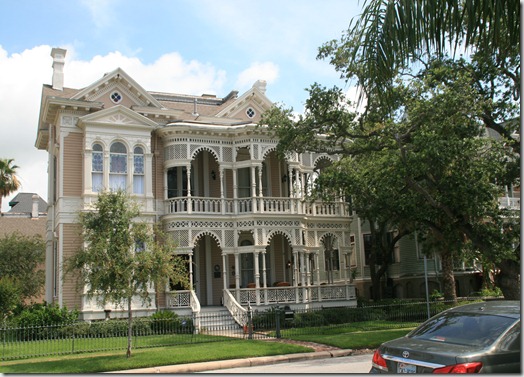 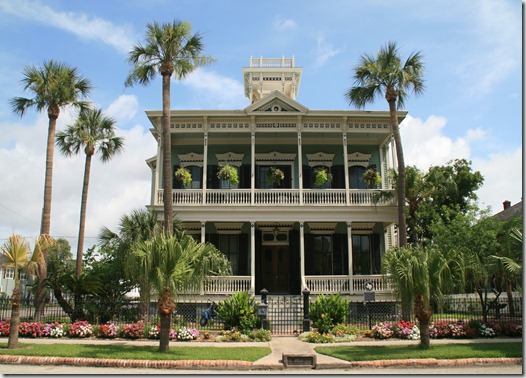 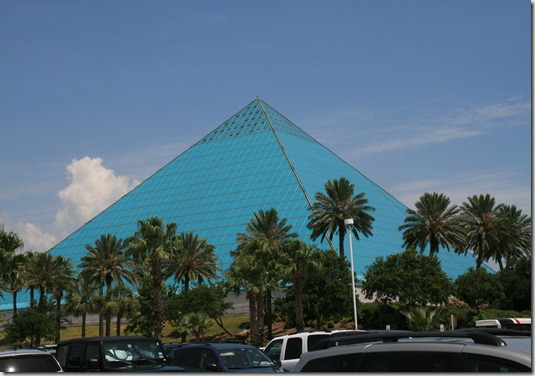 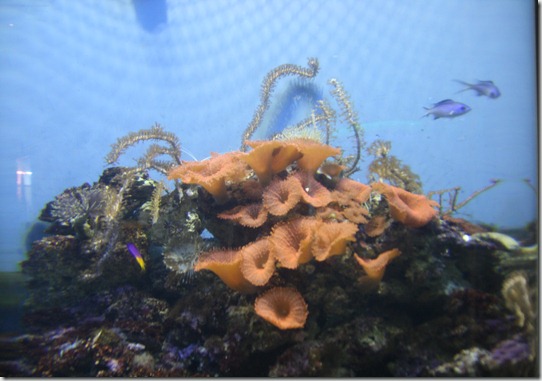 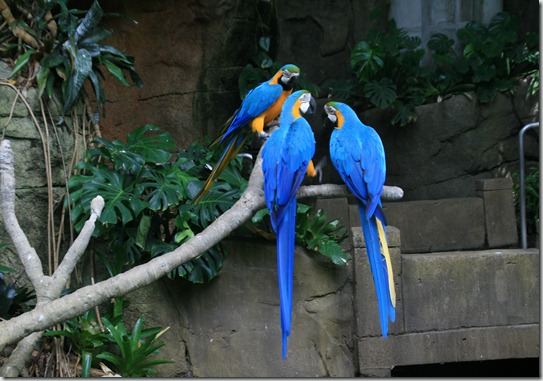 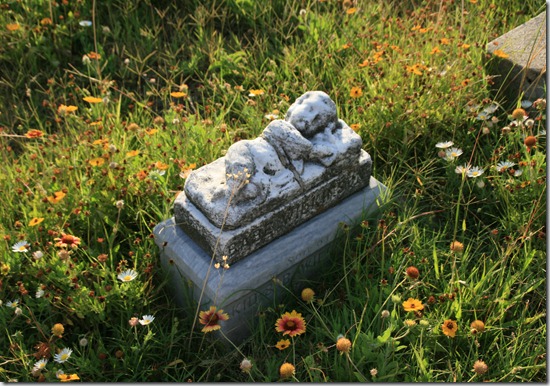 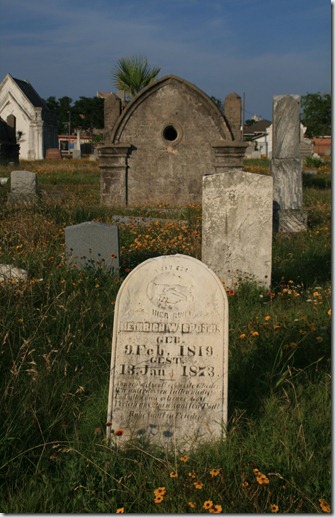 We also sampled the rides at the Pleasure Pier, a new attraction that went up as part of the clean-up and restoration after Hurricane Ike. 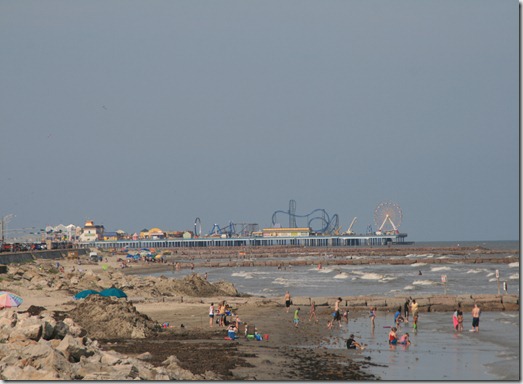 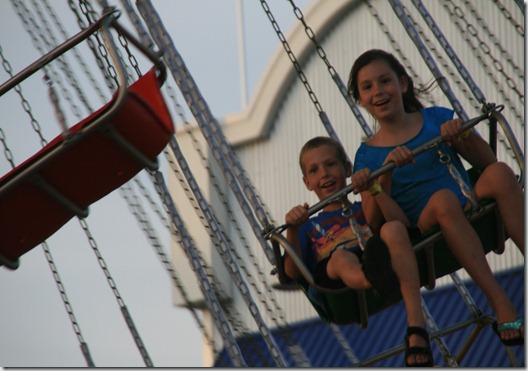 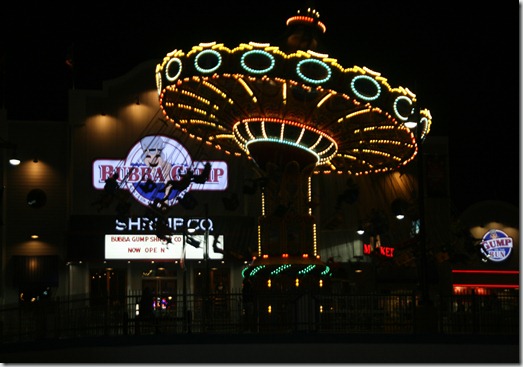 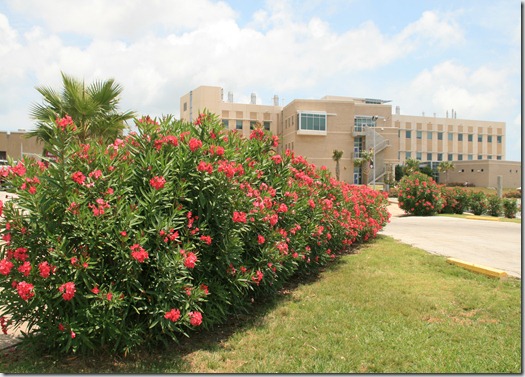 We also made a short visit to the Texas A&M Galveston campus on Pelican Island so Colten and Stormi could see one more college option, where we found a lovely line of oleanders, for which Galveston is well-known. 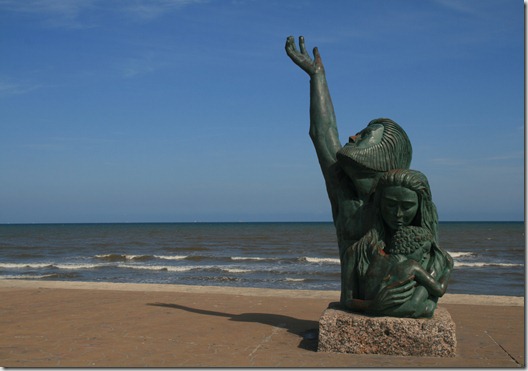 This sculpture  on the Sea Wall is in memory of those who died in the Great Storm, the hurricane that hit in 1900 and still stands as the worst natural disaster in American history. Isaac’s Storm: A Man, A Time, and The Deadliest Hurricane in History, by Erik Larson, Random House, is an engrossing account of this storm and how they actually raised the sea level of the entire island and built the protective Sea Wall after the storm. Rather than go back through Houston, we chose to take the county road that goes the length of the island to the south, through San Luis Pass and comes out at Surfside Beach at Freeport, where I swam many times in my youth, and then drove up highway 36 to Rosenberg, a nostalgic trip for me and a pretty and unruffled drive for everyone else, and then eventually  back home. 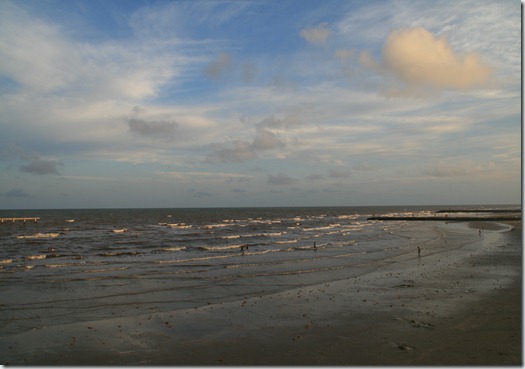 So even though Galveston’s beach may not be found in one of those top ten pretty beaches lists, the beach is still worth the trip,  and there are many other things to do and see on the island. Give yourself plenty of time to see everything. And eat lots of shrimp.