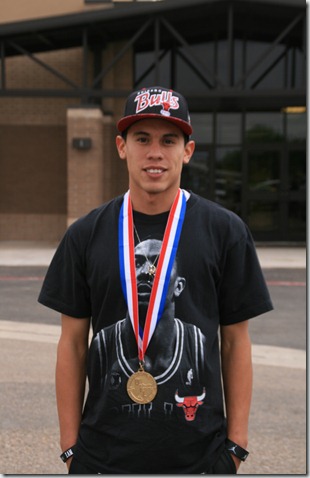 Junior Baca did us all proud when he placed first in the 800 meter run at the UIL state track meet in Austin last week. Of course, Junior also had a good year in football this past season, but he is also talented on the track, and this was his turn to shine as an individual. And shine he did. An interview with the champ as well as a video of his race, courtesy of flotrack.org by way of the Texas UIL website,   can be viewed at gillambadvertisingmuleshoe.com, And if you watch, you will see Junior run his own race, starting out near the lead but not burning out to hold the lead, and then when he came around the last curve of that second and last lap, at about the 200 meter mark, he just burst out of nowhere, and it was his race from there to the finish line. He put his heart and soul into it and kicked into high gear, surprising everyone that he could come from behind like that and win by such a nice margin. Congratulations, Junior! Quite an accomplishment. 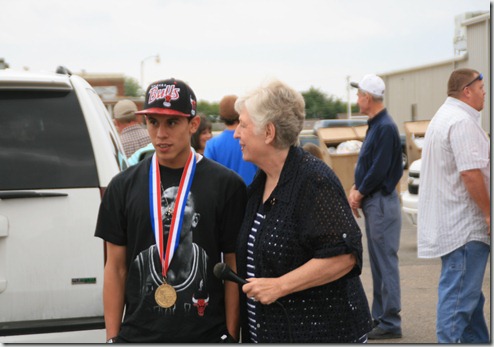 Thinking about Junior’s success, I thought about other kids from Muleshoe who made trips to state and were rewarded with a gold medal. So I decided it would be interesting to look back and see who else came home toting a   large gold disk. We have had a good number of kids who earned the right to compete at state, no small feat in itself, who may not have placed in the top three. But my goodness, look at all the kids who don’t even get to go at all. So, while those kids can look back with pride, including my daughter Caroline who went to state with her cross country teammates in 1986, who also hold the distinction of being the first girls cross country team from Muleshoe to compete at state (Yes, I am shamelessly taking advantage of the fact that since I am the author and the mother, I could sneak that in!), I wanted to focus on just the first place winners and  see if I could come up with a list of past gold medalists from our little podunk town out here in the middle of nowhere with the seemingly hard to pronounce name that no one has ever heard of… I talked to people and checked several sources, and I came up with quite a nice list, and to my knowledge it is all accurate information.  But time has passed and with this kind of list it is practically inevitable that I will have left someone off or reported some point of information incorrectly. So let me say right now I am sorry for any faux pas I may be committing. But I feel quite sure that if I do have something in error, dear readers, one of you will let me know, right? Check the comments for any corrections that may filter in. So here goes. Starting way back in 1938 Woody Lambert may have won the then 880-yard run. I was told that the 1938 football team made it to regional, which at that time was as far up the ladder that small schools could go, making their feat not really a state championship, but a championship of sorts. According to my investigation a long time passed before Muleshoe had another winner, and that was Shelly Dunham Turnbow who captured the discus title in 1980. After that the list gets longer: 1982 -  The boys cross country team, consisting of Allen Beasley, Tony Luna, Ronnie Logston, Martin Mendoza, Chris Hopkins, Tony Rojas, Henry Carrion, and Aldo Almanza, came in first. 1983 – The boys cross country won again, with almost the same team: Tony Luna, Danny Sanchez, David Medlin, Allen Beasley, Tony Rojas Ronnie Logston, and Norman Perez. 1984 – Another cross country team of Norman Perez, Ronnie Logsdon, Tony Luna, David Medlin, and Ralph Salazar won again! 1993 -  Eric Cisneros won the 3200 meter run. 2001 -  Kyle Atwood won the 800 meter run. 2002 – Kyle Atwood again, winning  the 800 meter and  1600 meter runs. 2003 – Jessica Withrow won the high jump. 2005 – Jessica Withrow  again, winning the high jump and the 100 meter  intermediate hurdles. 2008 – The Mules football team won the state 2A championship title. beating Kirbyville 48-26. (See “The Perfect Season,” September 7, 2009.) 2011 – Tyson Turnbow won the state 2A golf title. And if you think that name sounds familiar, well, it is. His mother is Shelly Turnbow, who threw that discus in 1980. Which bring us back to 2012 and Junior Baca and his 800 meter win this year. And who knows who will be next? Coach David Wood made the comment that when he moved here in 1996, Junior was just one of the toddlers he would have seen running around during sporting events, and here he is a state champion,  so you never know who that next champion  will be. It’s fun to watch and see how these kids turn out. And for me, that was one of the perks of teaching-seeing kids grow up and become themselves. So now all of you classroom teachers are sitting there thinking, well, what about the literary events? Those kids deserve recognition too. Yes, they do, so next week we will look at that list, and a local legend who helped many of them get there. But in the meantime, when you see Junior, give him a hug for a job well done. A special thanks goes to Bob Graves for his help in compiling this list, as well as Shelly Turnbow, Pam Atwood, Dana Perez, David Wood, and Mike Riley.