Now don’t panic-I’m not putting you through an English lesson on poetry-and we could look at this one on several levels, but Robert Frost said it best when he wrote “Nature’s first green is gold/Her hardest hue to hold.” We drove down to the Texas Hill Country for our Spring Break respite and were rewarded with all shades of green to compliment the emerging wildflowers. 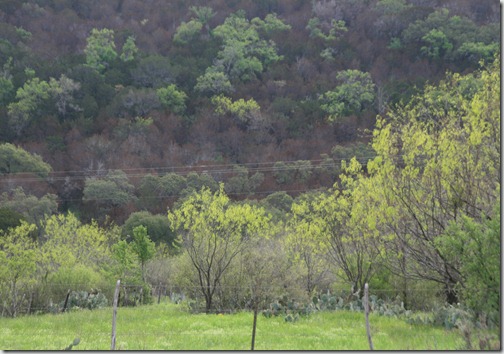 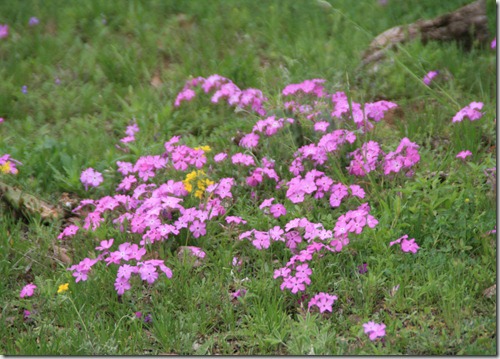 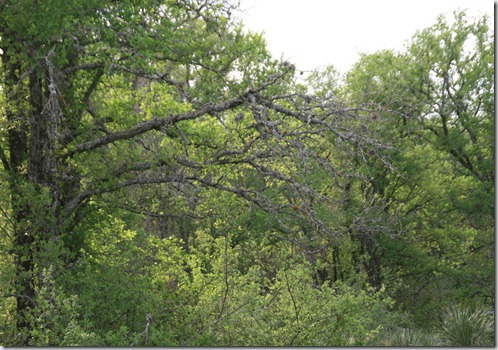 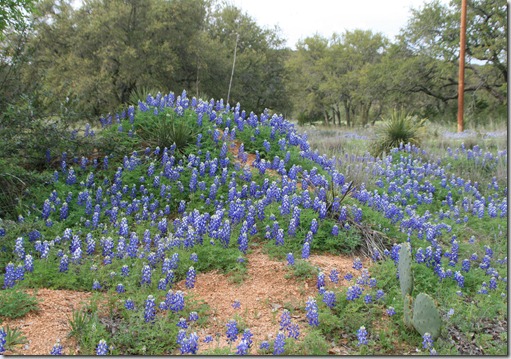 I love the bluebonnets and all the other colors of the rainbow that come out in the Spring, but I think it is the crisp, bright greens that I notice first. Up here the mesquite trees with their bright yellow green are what stand out against the brown of everything else as they leaf out. Down south the mesquites are joined by other trees and lush bright green grass as a backdrop for all the color of the flowers. 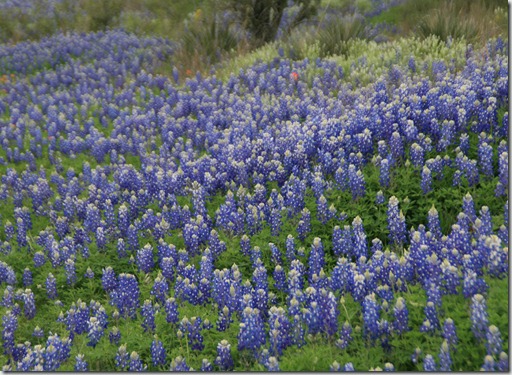 And it is all so seductive! The temptation is to take a picture as you cruise over the top of every hill, turn every corner, as it seems that every new patch of flowers is even better than the last. So, naturally, I take too many pictures and could bore you silly with all of them. But I have picked some of my favorites to share with  you.

The weather was overcast for most of the visit, which sometimes wreaked havoc with the best light for optimum color, but sometimes it created a nice contrast, like I think it did for this picture. 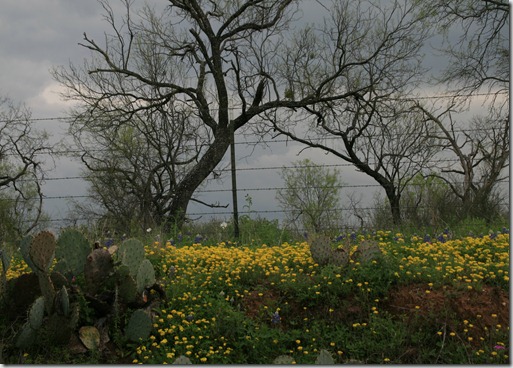 How about Texas longhorns (not the orange kind, however, Whoop!) in Texas bluebonnets? 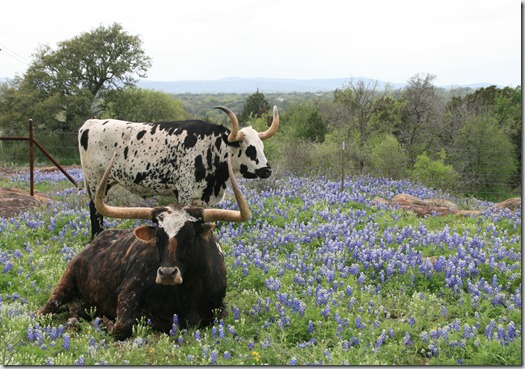 Most everyone who makes a bluebonnet trip feels compelled to plop the kids down in a good stand of blue for the obligatory bluebonnet picture. We didn’t have any kids to inflict this ritual on, so Mari got to pose for us. And let me tell you, posing a baby is a piece of cake compared to coaxing this dog into just the right spot, facing just the right way, standing just so for her portrait. After this shot, she wandered off to explore and took an unexpected swim when she slid down the bank into this stock tank trying to get a drink of water. 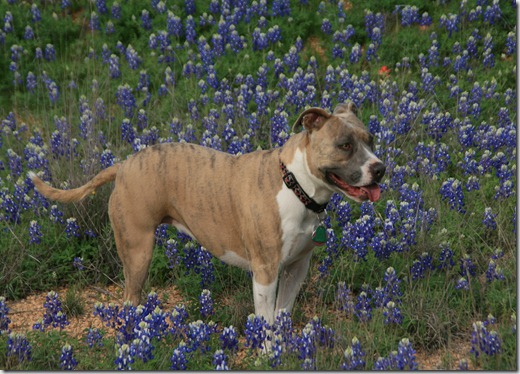 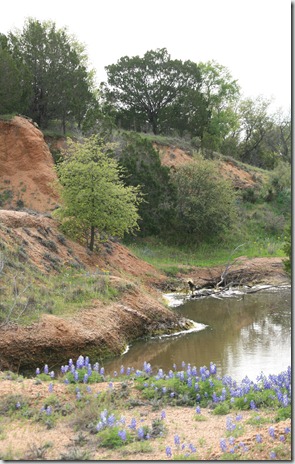 Note the white bluebonnet in the center. Texas A&M has developed a maroon bluebonnet, but I had not seen a white one before. 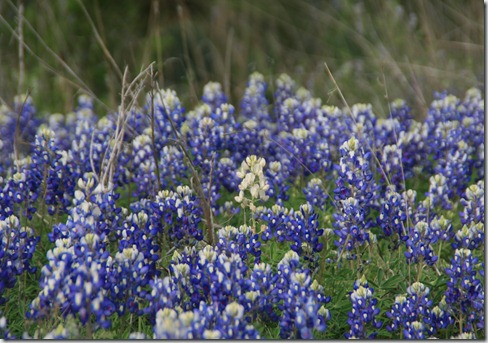 I didn’t really want the fire hydrant in the picture, but it blends in quite nicely since it is painted blue and red to match the flowers, and I have to think the color scheme was no accident. Redbuds were also pretty on this trip. This one was in a yard, but the wild ones are equally colorful. 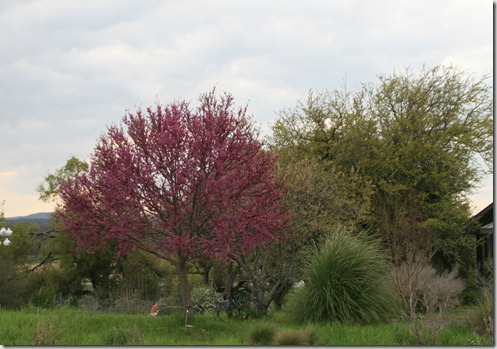 And here are several more shots I thought were pretty. 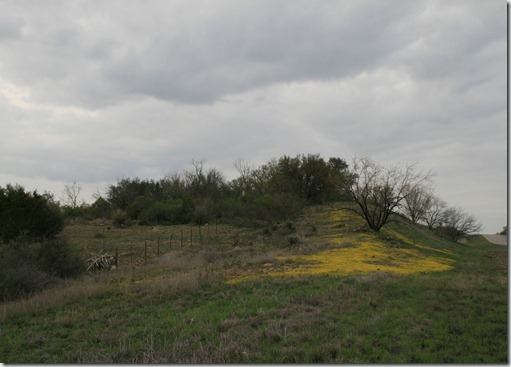 You can see the natural maroon in the flower that A&M worked to isolate to make the maroon bluebonnet. 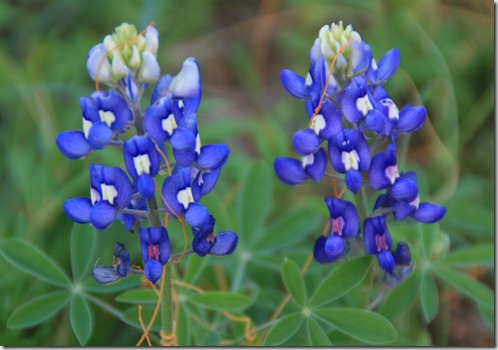 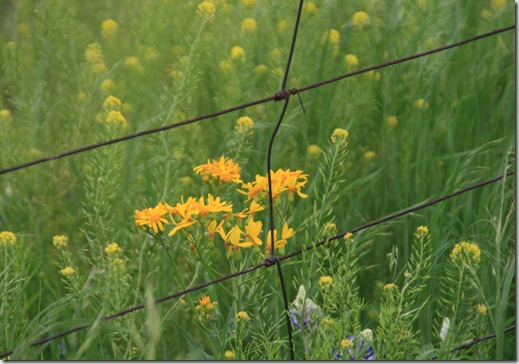 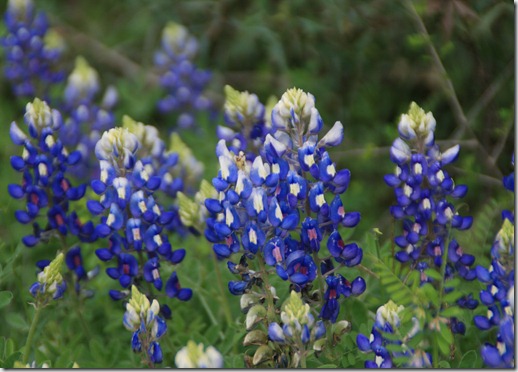 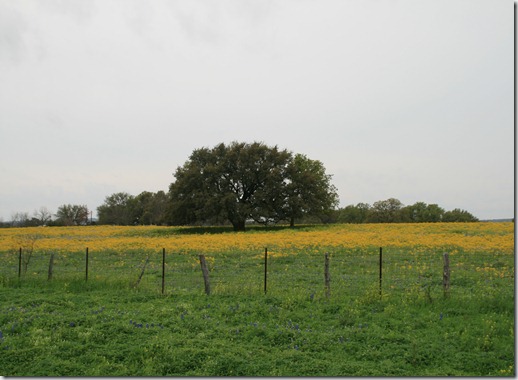 The yuccas were also in bloom. These are called Spanish bayonets, I think, and they are huge and add a nice contrast to the color of the flowers and the greens. 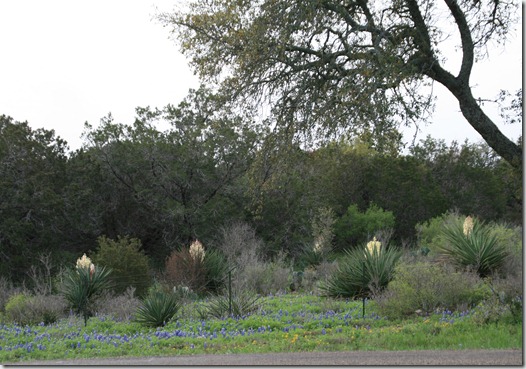 Wisteria was blooming all over the place, too, like this one in Johnson City and this big one that had overtaken the tree tops. 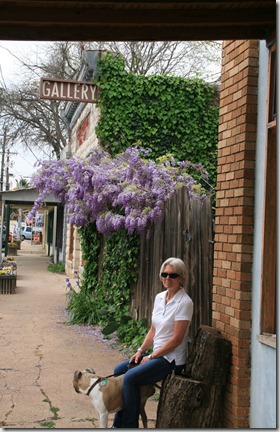 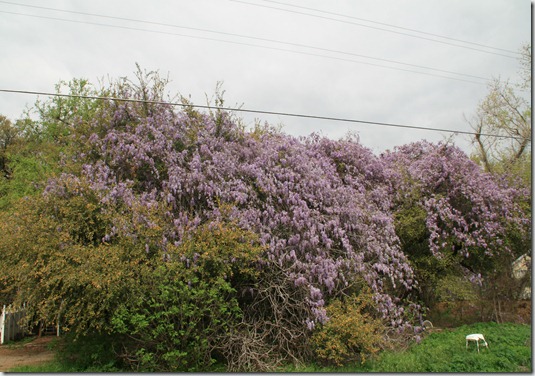 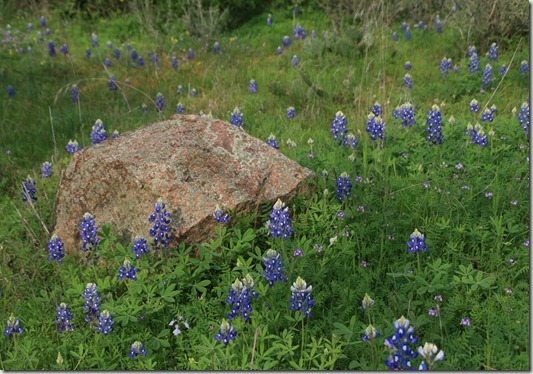 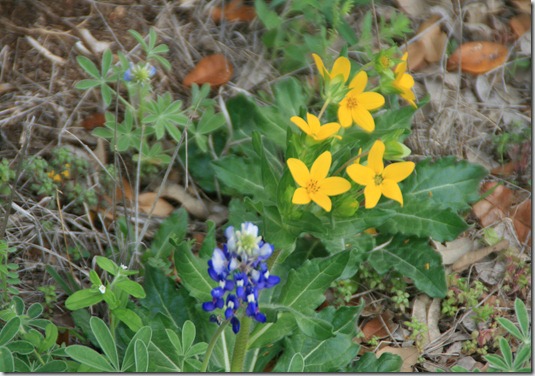 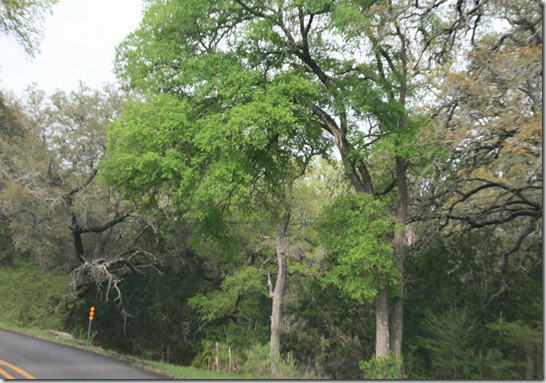 Just as Frost reminds us at the end of the poem that “Nothing gold can stay,” be it the innocence and beauty of one’s youth or the bright green of Spring, savor it while you can. Its gold is fleeting. Timing is everything.

Her hardest hue to hold.

Her early leaf’s a flower;

But only so an hour.

Then leaf subsides to leaf.

So Eden sank to grief,

So dawn goes down to day.

Nothing gold can stay.