At the west end of town, on the north side of U.S. Highway 84, also known as  American Boulevard, you will pass a very tall, imposing mule shoe, the world’s largest, in fact. This jenny slipper marks the entrance to a labor of  love, the Muleshoe Heritage Center,  that has been a work in progress since 1982 when the Santa Fe Railroad closed their Muleshoe depot and talked of removing it from that location, one way or another. 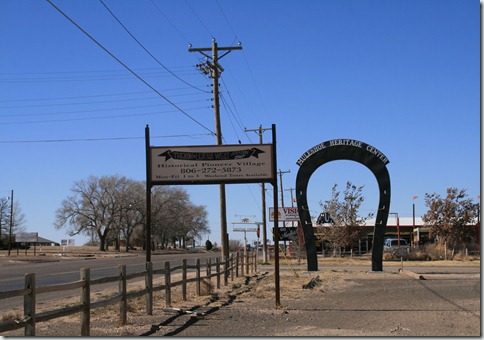 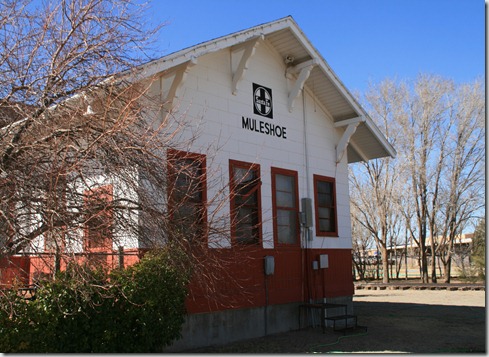 Santa Fe officials offered to donate the building to the city of Muleshoe if the city was willing to shoulder the cost of moving it to another location; the city was not, and  word spread around town that the historic old landmark  was to be demolished. Todd Holt, a Muleshoe High School senior at the time, was not willing to let that happen. So Todd, Laura Leal, Rhonda Dunham, Joni Sudduth, Abby Kennedy, Belinda Clayton, Annette Crabtree, Mike Foss, Jay Pearson, Lori Stroud, and others who wanted to help, asked Jean Allison, their government teacher, if they could meet in her room to organize a plan of action, and the Save the Depot movement was born. And born with vigor. The kids held a couple of car washes and some other fund raisers, which no doubt also created some consciousness-raising within the community that historic buildings like the depot should not perish but stand to educate future generations about early life in Bailey County. The depot was eventually saved and moved, thanks to the kids’ hard work, which led to the formation of SCAC, the Student Community Action Club, sponsored by Mrs. Allison at the high school, and the creation of the Muleshoe Heritage Foundation. Both organizations still exist today and work together to move, preserve, and restore other buildings that tell the story of Muleshoe and Bailey County. 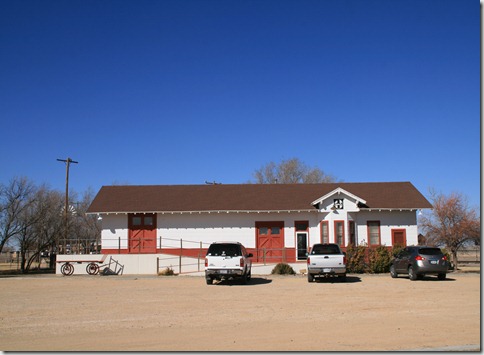 The Depot was moved in 1985 and dedicated in 1987. The ticket and passenger waiting room,  decorated with period furniture and historic memorabilia, and the freight room, outfitted with meeting area and full kitchen, can be rented for meetings, parties, and the like. Once the Depot had been moved and preserved, other historical structures followed. I will give you an overview of the things you will enjoy touring when you visit the center, which is open for tours 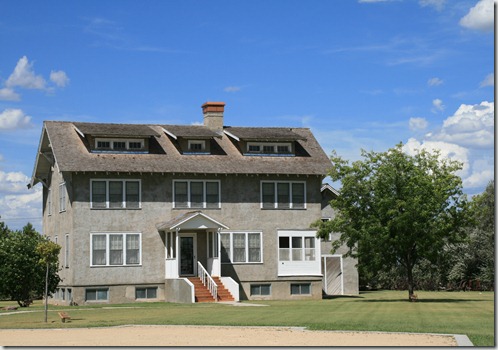 What I consider to be the centerpiece of the Heritage Center is the Janes Ranch House, but then I am a bit biased since we were privileged to live in the house for a year after moving to Muleshoe in 1980. Originally located on the Janes Ranch about seven miles east of town, the wood and stucco structure was a mail-order house purchased by cattleman John Janes for his new wife, ordered from the Aladdin Mail Order House Company, shipped to that aforementioned Santa Fe Depot, and completed in 1915. West Texas is not known for its forests, you know, and lumber would have to be transported in anyway, so it was not uncommon to see mail order houses delivered in remote areas, such as West Texas, complete with the lumber and  everything else needed, including the instructions of how to put it all together. This model was no doubt one of the high-end kits, complete with two stories, a basement, a fireplace on every floor, a laundry chute that ended in the laundry room in the basement,  a ballroom, a coal bin, a walk-in safe, a small wall safe upstairs (which is no longer there), an outside door for ice delivery into the wooden ice box, carbide/electric lighting, and indoor plumbing. I don’t know if the plumbing was added later or was original, but since there was a bathroom on every floor, I choose to think it was original. 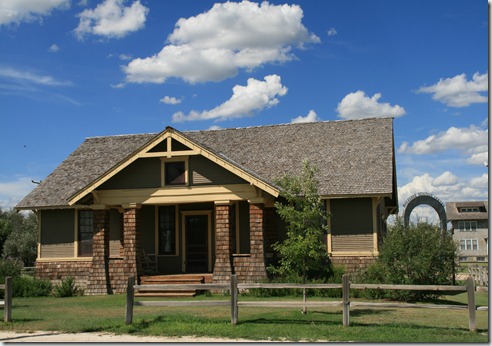 The Figure 4 Ranch House came from South Bailey County and served as headquarters for the Figure 4 Ranch, owned by H.M. McCelvey of Temple, Texas, who bought the 42-section ranch in 1906 as an investment and then hired Henry Hanover, also from Temple,  to run the place.  The house was built sometime before 1916, and Hanover’s wife and three girls made a life for themselves there until  Hanover retired and moved to Muleshoe. One of his daughters, Katherine Sanders, was a teacher for many years is the Muleshoe school district.  Later Mr. McCelvey divided and sold sections of the ranch which were turned into farms, and years after, the ranch house became a part of the Heritage Center. 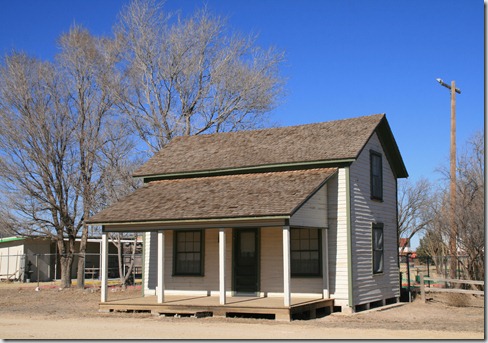 The Virginia City Hotel was built to provide lodging for prospective land buyers, farmers,  who were lured to the area by the break-up of the XIT Ranch and three wet, rainy years. A land baron named Matthew C. Vaughn from Waterloo, Iowa, filed the first town plat in Bailey County on the Fort Sumner Road, named it Virginia City, and hoped it would become the first County Seat. Looking nothing like what we expect of a hotel, the second story was one large room big enough for eight cots. The first floor had two rooms, a kitchen and an office that was also the Post Office. Unfortunately, the good rains stopped, and after three years of extreme drought, Virginia City became a ghost town. Maple Wilson bought the hotel and moved it two miles west of Maple for his ranch headquarters, and later it housed his tenants before it became a part of the Heritage Center. 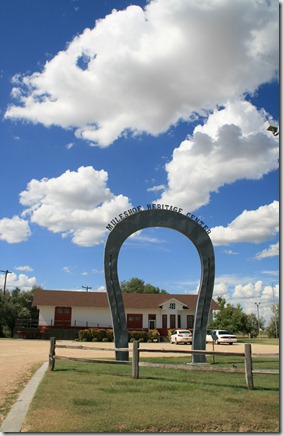 The World’s Largest Muleshoe was first installed here by the Depot parking lot  in 1994, an Eagle Scout project conceived and completed by Kermit Price, with a little family help. Made of I-beam steel and big enough to drive a semi tractor-trailer through, the monument was moved in 2008 to its present location beside the highway as a more prominent marker to the entrance of the center. Kermit financed his project by selling sets of mule shoes to be embedded in two intertwined concrete mule shoes that were placed in the ground near the monument. Those shoes are engraved with the donors’ names, which gives them a place in the history of the center. 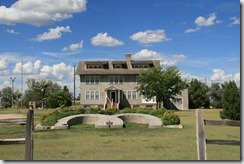 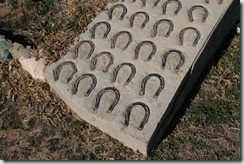 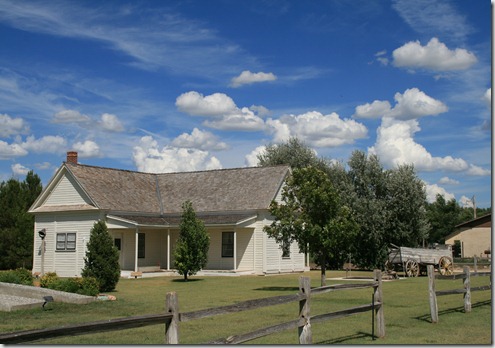 From 1903 to 1907 Edward K. Warren and his son Charles, Michigan manufacturers  of buggy whips and corset stays, bought 80,000 acres of land in this area for what would become their ranch, named the Muleshoe Ranch. Stories differ as to why the owners named it the Muleshoe Ranch, but I am told that the town of Muleshoe was named after the ranch since the town grew up on the ranch’s land as the railroad came through.This Muleshoe Ranch’s cookhouse/bunkhouse fed and sheltered many a cowboy In its day and was a fitting addition when it was moved to the Heritage Center in 1986. 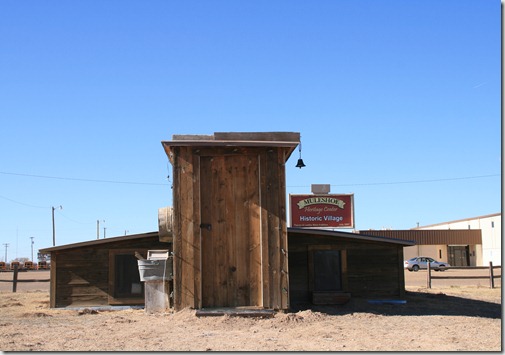 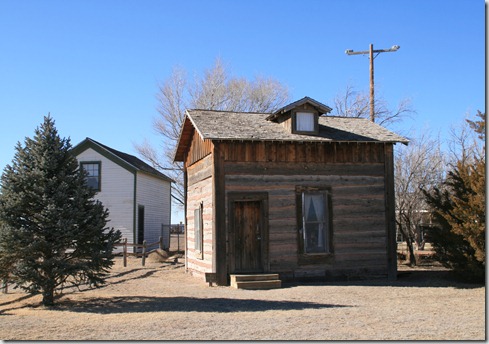 The Log Cabin is the only structure in the center that is not typical of this area. How could it be without native trees to become the logs? But even so, many early settlers and pioneers lived in log cabins, so its historical significance earned it a place in the Center.  The cabin was found in the North Canadian River bottom near Shawnee, Oklahoma, and donated and moved to Muleshoe by John Fried. Much work and repair had to be done to the cabin to restore its original form, a one-room structure with a sleeping loft for the children.

As I mentioned earlier, the Heritage Center is a work in progress. Next week’s blog will spotlight more buildings that have been added and a few that are currently being restored and readied for viewing.

Thanks to Shelia Stevenson, Dolores Harvey, Jean Allison, Todd Holt, Laura Leal, Kelly Robinson, and Arnold Price for helping me gather information for this article. Much of the historical background of the buildings that I included came from the brochure “Experience Our Heritage,” written by Jean Allison and available at the Santa Fe Depot in the Heritage Center.