While Ol’ Pete spends most of his time taking pictures with  people traveling through  Muleshoe, he did have the opportunity to visit our nation’s capitol in 2001  for President George Bush’s inauguration. It all started with Larry and Rick Meyers, sons of Jinx and Rowena  Meyers, who grew up in Muleshoe but moved to Washington, D.C., where they established a consulting/lobbying firm. Brother Cliff, who  moved to  Lubbock,  was also in on the deal. They all three  may have moved, but they never forgot their Muleshoe roots, and together with other transplanted Texans who moved to the D.C. area, they formed a group known as the Texas State Society. The Texas State Society planned a bi-partisan Texas-themed black-tie ball for the night of the inauguration festivities and came up with the grand idea that Ol’ Pete should be there as well. It took a little sweet-talking and maneuvering, but they gained permission from City Hall and the Texas Historical Commission to remove him from his permanent home and let him be an honored guest at the ball. After more phone calls and cajoling, it was agreed that Pete could hitch a ride to and from the party with other memorabilia that Texas Tech University would be sending to the inauguration. 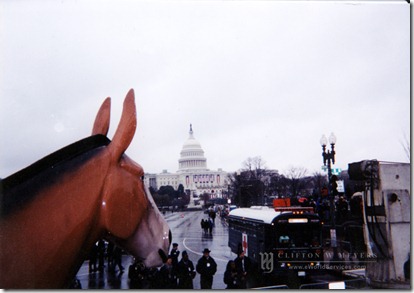 Needless to say, Pete wouldn’t be the only one from Muleshoe to make the trek to the Capitol. Along with the three Meyers brothers, Muleshoe was represented by Muleshoe mayor Victor Leal and his wife Debbie, Chuck Smith, David and Diane Smith, Vicki Jinks, Bruce and Cindy Purdy, Charles and Jerie Nell Flowers, Mike and Cris Cleavinger, Pat Young, her daughter Tisha (Boehning), and son and daughter-in-law Tadd and Annie Young.  They all had invitations to the ball and had to be checked out by the Secret Service before being approved to attend the ball. Nothing was said about checking out Ol’ Pete’s credentials… 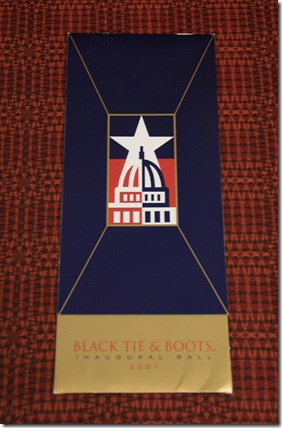 Invitation to the Black Tie and  Boots Presidential Inauguration Ball 2001 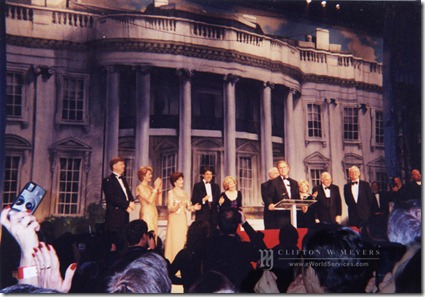 The Black Tie and Boots Presidential Inauguration Ball 2001 was the brainchild of the Texas State  Society; the Muleshoe Martini and Cigar Bar at this ball was the creation of Rick and Larry Meyers. And this is where Ol’ Pete was to hold court, except they couldn’t get him into the Marriott Wardman Park Hotel to do so! With a little manual labor and deconstruction of an entry door into the hotel’s kitchen, Pete finally made his entrance, to the delight of the party-goers. President Bush did, in fact, visit the bar, along with Laura Bush,  Vice President and Mrs. Cheney, Kay Bailey Hutchinson, and Governor Perry. And as the night wore on and the martini bar lived up to its name, things got pretty lively. I’m sure Pete was the silent witness to many events  and stories that are probably best left untold, but an exhibition of mule riding (think Debra Winger on the mechanical bull in Urban Cowboy) was one display that probably everyone else saw, too. 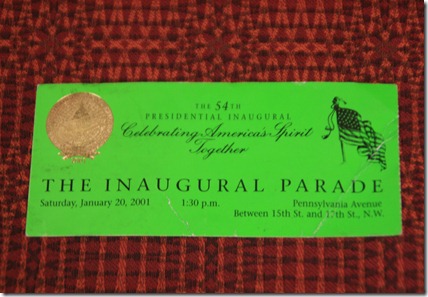 This ticket to the Inaugural Parade allowed the Muleshoe group to be seated on a reviewing stand  where they had a good seat for watching the parade. 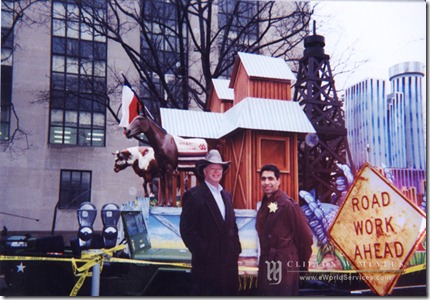 Rick Meyers and Victor Leal with the float. Photo  courtesy of  Clifton Meyers. (I don’t think the Road Work Ahead sign is part of the float!)

As the party wound down, it was time to get Pete to his assigned spot for the parade, so Victor Leal, Mike Cleavinger, Chuck Smith, Bruce Purdy, Clifton Meyers, and Charles Flowers gathered him up, loaded him in the back of a pick-up, jumped in the back with him, and off they went in the freezing rain to find the float on which he would ride for the parade. As they were racing from red light to red light holding on dearly to the mule, lest he get banged up before they could get him home safely to Muleshoe, Victor Leal fondly remembers looking up and seeing, in the distance,  the Washington Monument between Pete’s ears. How neat is that! 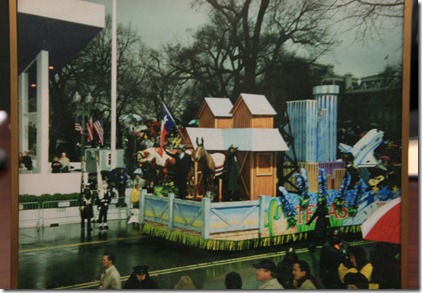 But get him there they did, and he proceeded to travel the parade route on a float, thanks to  the Texas State Society, with a longhorn steer, bluebonnets, and other things Texan, along with  Rick Meyers, Cliff Meyers,  Ben Crenshaw, Miss Texas- Sara Watson,  Mayor Leal, and others I am probably leaving out by accident. And the rest, as they say, is history. Pete made it home no worse for wear, but much more worldly,  and back to the safety of his perch on American Boulevard, where he still stands to greet visitors and serves in  honor of mules and their contributions to society. Next week: the mule of many colors.

Thanks to Cliff Meyers, Rowena Meyers,  Chuck Smith, Victor Leal, Magann Rennels, Cliff Black, Juana Shelburne,  and Pat Young  for their help on this and the Mule Memorial story.