The other legend that circulates about Ol’ Pete is that he spent some time up on top of Muleshoe High School. One source said it was a group of boys from Springlake-Earth who were responsible, and that may be right, but I couldn’t find another person to corroborate the story.

Then I finally realized I was looking in all the wrong places. I sent Bill to coffee with instructions to inquire of the old guys he gossips with-yes, men do gossip; they just call it going to coffee-if they knew anything about it. After all, most of them grew up in Muleshoe, had been here for the duration, might even be the ones responsible for Ol’ Pete’s  relocation…

Well, that wasn’t the case, but in a heartbeat and after a chuckle, the lead miscreant was revealed, and I knew exactly who could give me the goods. So, once again names will not be used to protect the guilty, an exercise in futility, but that was the deal. Here’s what I found out-

This time the adventure took place in the early 70s with a slightly younger group of boys.  It was a time of low school spirit, an unsuccessful football team, too many boys not in athletics with too much time on their hands, and a bootlegger on every corner to oil the wheels of the boys’ bad decisions. This was also back in the days when kids weren’t given fancy new dependable vehicles that made it easy to cruise over to Clovis on the spur of the moment when the mood struck, so the boys came up with their own entertainment, which usually involved dragging Main at home.

And other little touches. They located the two sensors that turned the street lights on and off and figured out that if they shined a spotlight on the sensors the lights would go off just long enough for them to use their handy 9/16 wrench to loosen the bolts anchoring the mule to his stand, one per hoof. Then they would  whisk Ol’ Pete into the back of a pickup so he could carouse with them. Pete graced the yards of teachers’ homes, and yes, the top of the school library, and covered lots of miles in various pickups while the boys made every stop light-the town had about six then-participating in Chinese fire drills along the way, deposited many a beer bottle on the top of St. Clair’s Department Store, and in general aggravating many adults but somehow not getting caught or stopped.

But it was the beer bottles they threw up on the St. Clair building’s flat roof  that was their final undoing, not hauling Pete around. Someone had to go up on the roof to fix something, discovered an alarmingly huge number of empties up there, and it was decided that things had gone on long enough. The late H. D. Hunter, then pastor of the Assembly of God church, who happened to be on pretty good terms with the kids, decided it was time to have a visit with them. A meeting was arranged and they all sat down for a friendly yet stern talk about their behavior. Reverend Hunter explained to them the embarrassment they were causing their parents, some of the consequences they might ultimately suffer for their misdeeds, the real dangers and accidents they had luckily avoided but could still encounter, and the fact that so far the mule had gone through all this unscathed, but it would take only  one injury to the mule or themselves, and things would no longer be just for fun. The boys respected Mr. Hunter, loved their parents, and in the end didn’t want to hurt any of them, so they decided perhaps the time had come to find something else less offensive to do. So they stopped.

If truth be told, after the talk, some of the fun had probably gone out of stealing Ol’ Pete anyway. And that was the end of Ol’ Pete’s running around.  At least until he had the chance to visit Washington, D.C. legally and all. If there are more adventures to be told, it will be up to someone else to tell those tales. I’m all out, and Pete seems perfectly happy with his more sedate life.

So if you don’t have a picture of yourself with Ol’ Pete, next time you are in his neighborhood, take one, like Bob and Virginia Yatzeck from Springfield, Virginia, did- 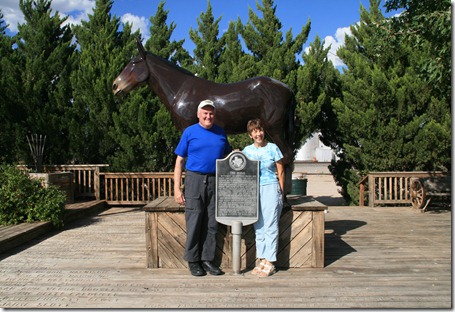 or like  Kaley (Mrs. T.J.) Hutto of  Lubbock (on Ol’ Pete), Debbi Hutto, of Muleshoe and Canyon (now Lubbock),  Kaley’s mom Connie Wedemeier, and Kaley’s sisters Whitney and Lindsey Wedemeier, all from Iowa. 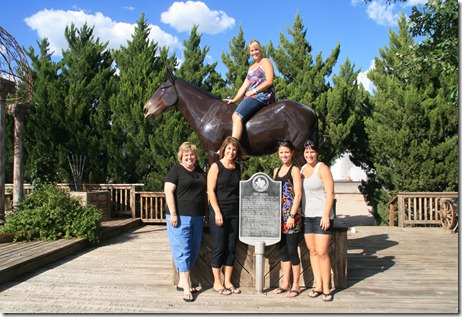 You see, Pete’s a pretty famous guy,  whose fame continues to spread far and wide. And all his adventures are true!